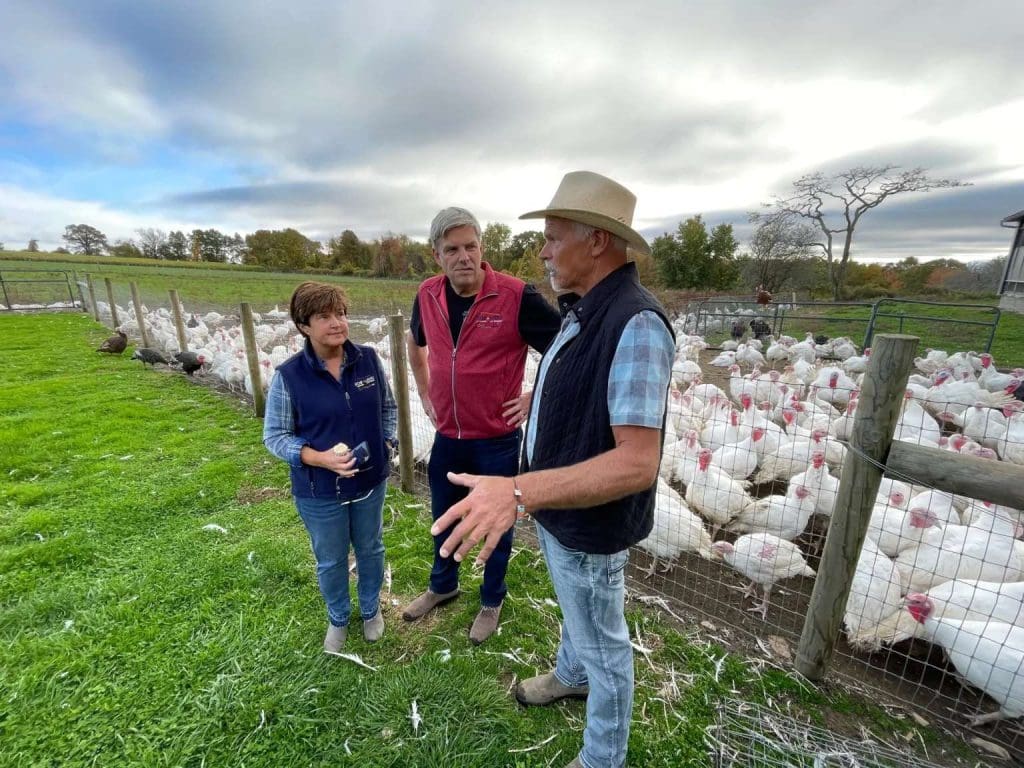 Bob Stefanowski, center, campaigning with his wife Amy at the Ekonk Turkey Farm in Sterling owned by the family of Rick Hermonot, at right. (Mark Pazniokas, CTMirror.org)

Lamont’s comments were the first since Stefanowski confirmed Oct. 12 that he had been concealing his employment by Neom, a client of a consulting practice that has allowed him to largely self-fund his campaign for governor.

“I can see why somebody running for office wanted to hide that from the public,” Lamont said Oct. 14. “I think it raises some real questions about his judgment and his independence.”

Responding to reporting by Hearst Connecticut, Stefanowski acknowledged approaching the Saudis in late 2018, not long after Saudi agents killed Jamal Khashoggi, a Washington Post columnist critical of the regime.

“I think signing the deal with the Saudis, right after the assassination of Khashoggi raises questions about judgment,” Lamont said. 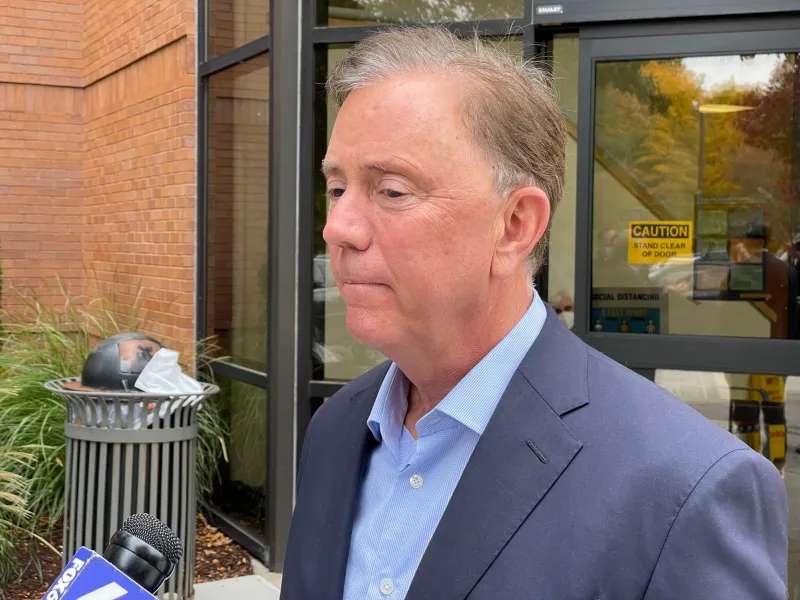 At the time, Stefanowski had just lost his first race for governor and was looking for consulting work. He began working for Neom in 2019 as the CIA concluded that Khashoggi’s death was most likely was ordered by the crown prince.

On Oct. 21, interviewed after a late-afternoon campaign stop at at turkey farm in Sterling, Stefanowski declined to directly respond to Lamont’s attacks on his judgment or independence.

“Gov. Lamont is no one to question my judgment,” Stefanowski said.

He repeated his criticisms of Lamont for the state contracting with Sema4, a company in which a venture capital firm co-founded by First Lady Annie Lamont had invested.

But the Saudi disclosure flipped the script on a Stefanowski line of attack in 2022 — that Lamont and his wife were not fully transparent in their finances.

Stefanowski said only after being approached by Hearst Connecticut did he seek permission from Neom to confirm they were a client. He said he had been bound by a non-disclosure agreement.

He offered no explanation of how the mere disclosure they were a client would have jeopardized any portion of Neom, a project that the crown prince announced in 2017 to global fanfare.

“It’s not my determination to make. I put my clients first,” he said.

The Lamonts say they have disclosed all sources of their income in their annual Statements of Financial Interest, as required by the state ethics code. Their filings are public.

In addition, they have disclosed the identities of companies in which Annie Lamont’s company, Oak HC/FT, is invested, whether or not those investments have produced income for the Lamonts.

On that list is Sema4, one of four companies that won fast-track, no-bid contracts to provide COVID-19 testing in the earliest months of the pandemic.

The Lamonts say they have derived no income from Sema4, whose value has tanked. From a peak of nearly $26 a share in February 2021, it closed Friday at 86 cents.

Stefanowski acknowledged he was still working for Neom and traveling to Saudi Arabia earlier this year. He says has reduced his work by 98%, without saying if his Neom income also has fallen by 98%.

“It sounds like Bob is still on the payroll. At the same time, he’s a candidate for public office,” Lamont said. “So I’m not quite sure if he’s really working it right now or not. I think he’s campaigning pretty much full time. But it does lead to questions. The Saudis are trying to get involved in our political process far and wide. So that’s why I think let things settle out. But those are the questions I have.”

Lamont said Stefanowski was hiding his ties to the Saudis, who recently have cut oil production to force higher prices, while the Republican was faulting Democrats for higher gas prices.

Until Wednesday, Stefanowski had not disclosed any sources of the income he earned through his consulting firm, Lolo. Last month, Stefanowski released summary pages of the $36.8 million he and his wife reported earning in 2019, 2020 and 2021.

His consulting practice produced sharply higher income than the millions he reported earning in 2016 and 2017, the last years as chief executive officer of DFC Global, a payday loan company. His income then was $6.9 million and $9.7 million.

On Friday, Stefanowski suggested Lamont was somehow tainted by Neom due to the reported interest in investing in Neom by Ray Dalio, the founder of Bridgewater Associates.

“If the governor is going to say anything negative about me to this, he’s got to speak to the fact that he took $100 million from Ray Dalio,” Stefanowski said.

Stefanowski was referring to $100 million that Dalio’s family charity had pledged to the state, not Lamont, in a partnership to serve disaffected youth. The partnership was dissolved before going forward, and the Dalio family is pursuing its goals through private philanthropy.

In April, Lamont released his summaries of his tax returns showing an adjusted gross income that averaged $8.65 million a year in 2018, 2019 and 2020. He did not release 2021 taxes, for which he had sought an extension.

Lamont, whose deadline for filing was Oct. 15, is expected to release the 2021 summaries.

Both Lamont and Stefanowski are largely self-funding their campaigns.

While the governor’s tax returns showed ample investment income to pay for his campaign, Stefanowski said Lamont should say what assets, if any, he sold to finance his reelection.

Isn’t it fascinating how the press only seems interested in one party’s sources of income? No mention of Lamont’s wildly successful cable monopolies on college campuses that rewarded him with $100s of millions in profits, nor his wife’s firm’s no bid contracts with the state for entities in Tennessee.