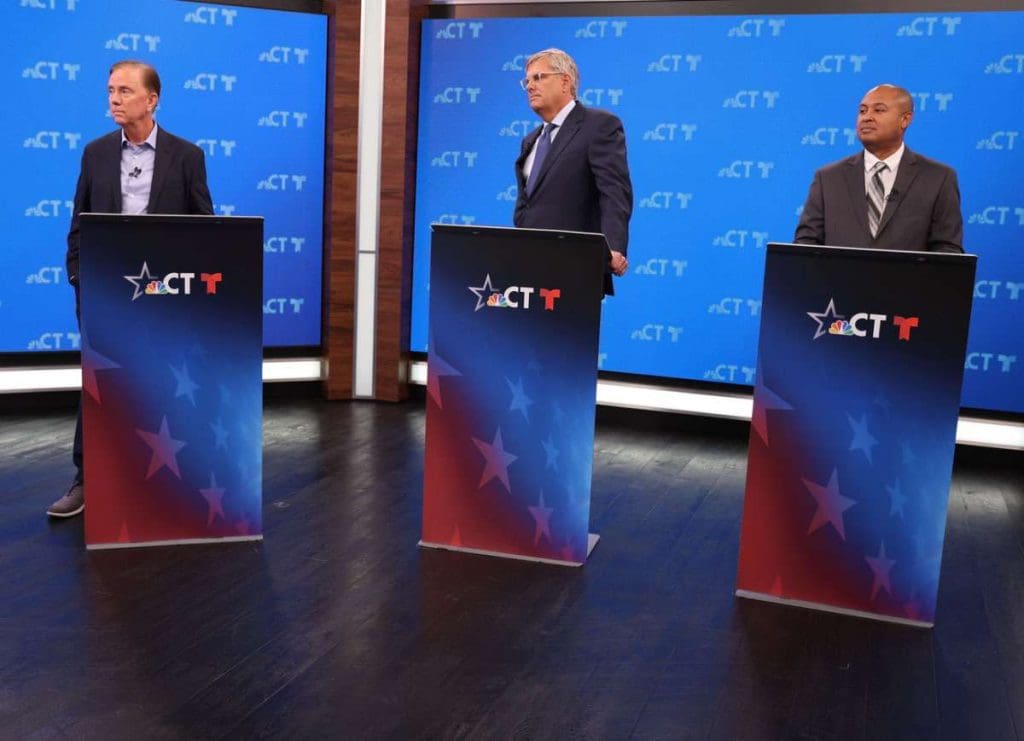 The Democratic governor and Republican challenger, joined by Rob Hotaling of the Independent Party, diverged sharply in their views of Connecticut in a 60-minute debate that NBC Connecticut live-streamed and recorded for broadcast at 7 p.m. Tuesday and 10 a.m. Sunday. Telemundo will show it Saturday at 11 a.m.

Stefanowski was the aggressor. He portrayed Connecticut as dangerous, overburdened by taxes and struggling economically, but he said it can still afford to spend billions in budget reserves to raise pay for police and teachers and lower household costs for consumers.

“It’s unconscionable that we’re sitting on $6 billion when people are out there right now only filling half of their oil tank because they need food,” said Stefanowski, who promised in his first campaign in 2018 to phase out the state income tax over  10 years.

Connecticut closed the last fiscal year on June 30 with a $4.3 billion surplus, and early projections show this fiscal year closing with another $2.3 billion cushion.

Lamont reminded voters of how quickly Connecticut has rebounded from a string of budget crises and tax increases to three years of surpluses that have allowed $660 million in tax relief in 2022, full budget reserves and unprecedented payments on the state’s unfunded pension liability.

The governor said Stefanowski’s old idea would have gutted state government and state aid to municipalities, and his new idea “is to gut the rainy day fund.”

Lamont said Stefanowski’s answer to every need is to spend the budget reserve.

Stefanowski unveiled a $2 billion tax relief plan earlier this month, including recurring tax cuts worth roughly $700 million per year that would require either deep service cuts or scaling back of the savings program launched in 2017 to ensure budget stability and to reduce Connecticut’s long-term pension debt, which is roughly $40 billion.

Hotaling mildly split the difference, not taking full advantage of his only debate invitation to make the case why the candidacy of a minor-party candidate with no elective experience or financial backing should be viewed as credible.

Lamont was relaxed after the debate, confident that a Hearst Connecticut/WFSB poll released earlier Tuesday shows that voters do not share Stefanowski’s dark view of Connecticut or its first-term governor. The poll showed Lamont with a 15-point lead.

The debate’s format was casual, with no strict limits on the time candidates used to answer questions posed by Mike Hydeck of NBC Connecticut and Grace Gómez of Telemundo Nueva Inglaterra.

Stefanowski insisted that crime statistics do not accurately reflect crime in Connecticut, a state that routinely ranks among the safest in America based on annual Uniform Crime Reports collected by the FBI.

During the debate, Stefanowski dismissed fresh State Police data showing that crime was down 3% in 2021 after an increase in 2020. He argued that the police accountability law passed after the police murder of George Floyd in 2020 have cowed police from pursuing criminals and depressed the recruitment of new officers.

“Government has lost respect of police officers. I’m going to get it back. I’m going to be behind these men and women, and we’re going to make Connecticut safer,” Stefanowski said.

He suggested that the fear of personal liability is the reason why police infrequently engage in high-speed chases, even though there has been a national trend against them in recent years.

“Of course crime is down, because they’re not following in high speed chases anymore. We need to reverse that,” Stefanowski said.

Stefanowski and Lamont clashed fiercely, if briefly, on abortion.

The Republican candidate pledged to defend the state’s 32-year-old law codifying Roe v. Wade, though he has refused to say whether he would have signed a new law that provides a legal safe harbor for abortion patients and providers against so-called vigilante lawsuits authorized by Texas.

Lamont is trying to scare and mislead women about what a Stefanowski administration would mean for reproductive rights, Stefanowski said.

He noted that Stefanowski had financially supported Leora Levy, an anti-abortion candidate, over Themis Klarides in the Republican primary for U.S. Senate. Klarides is a social moderate who favors abortion rights.

Stefanowski was ready, saying that he never would suggest that Lamont’s contribution to Gov. Steve Bullock of Montana, a Democrat who opposed a ban on assault weapons, should lead anyone to question Lamont’s commitment to gun control.

Lamont made no mention of Stefanowski’s refusal to take a position on the safe harbor law.

Without being asked, Stefanowski mentioned his opposition to 8-30g, a state law that is one of the state’s tools to encourage affordable housing development, saying it undermines local rule.

He also repeated his opposition to transgender athletes playing in girls sports, without saying if he would support repealing the the civil rights law that currently allows them to compete. He objected to how sex education is taught in some schools, again without suggesting a course of action by the state.

Lamont and Hotaling said nothing in response.

The candidates plowed no new ground, with the possible exception of Stefanowski seeming to propose privatizing Bradley International Airport and other state-owned transportation facilities.

In response to a question about transportation infrastructure spending, Stefanowski almost casually mentioned privatization, as opposed to greater state investment.

“We don’t have the money to do it. Let’s bring the private sector in. Let’s cut a good deal, make sure we got enough economics. Airports is another one. Most countries and states across the world have privatized their airports,” Stefanowski said.

He left the post-debate press conference without saying if that was a proposal he intended to make if elected. His campaign did not respond to a request for clarification.

Lamont said he saw no reason to sell Bradley, which is now run by the quasi-public Connecticut Airport Authority.

The debate ended on a theatrical note, with the candidates asked to say something nice about each other.

Stefanowski congratulated Lamont on the recent wedding of his oldest daughter and said, “You have a terrific family.”

Lamont, who lunched with Stefanowski after defeating him four years ago, returned the compliment about families.

“Right back at you, Bob,” Lamont said. “I know you and Amy. We had a nice lunch after last time. We’ll do it again.”

Keith Phaneuf contributed to this story.