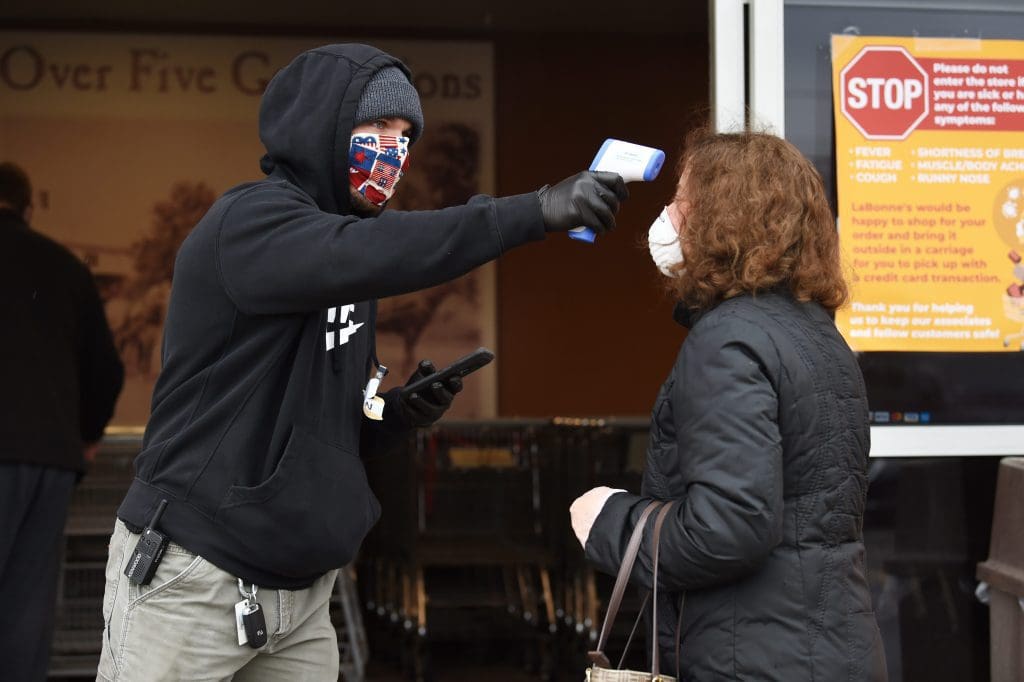 Danny Esposito, of Simsbury, (left) takes a customer’s temperature before allowing her to enter LaBonne’s Market in Watertown. LaBonne’s is limiting the number of shoppers entering all of their four area markets and requiring a temperature check for employees and customers alike. (Cloe Poisson, CTMirror.org)

HARTFORD, Conn. — While the latest statistics from around Connecticut offer “slight glimmers of hope” that the coronavirus pandemic may be easing, Gov. Ned Lamont warned Thursday that schools and most small businesses must  remain closed for at least another month to prevent any resurgence of the deadly virus.

“I’m encouraged that social distancing… may be paying off,” Lamont said at his afternoon briefing. “I do worry that if we rush back to work… we could have a second or third wave of this pandemic.”

The glimmers of hope to which Lamont referred include a smaller increase in COVID-19 hospitalizations over the last 24 hours. The state reported 46 new hospitalizations Thursday — the lowest number Connecticut has seen in two weeks — bringing the total number of infected patients in hospitals to 1,464.

The number of hospitalized patients in Fairfield County, which has been the epicenter of Connecticut’s pandemic, actually declined by a single patent. 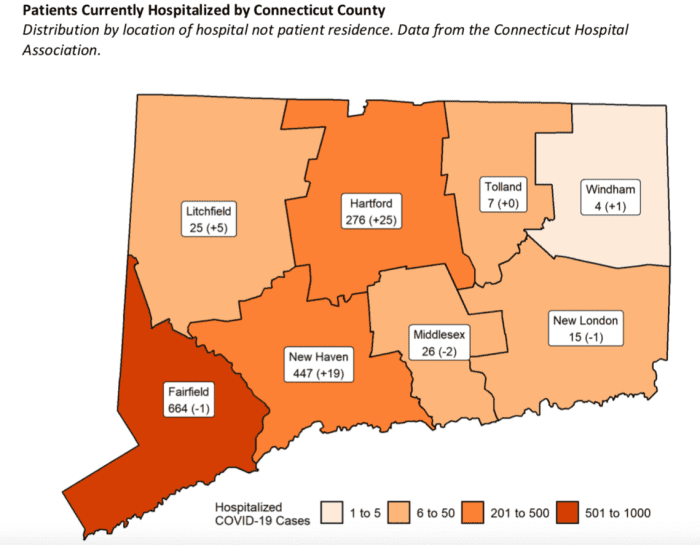 “That’s good news,” Lamont said. “The rate of hospitalizations is not going up …We may be reaching a peak.”

But Lamont was clearly cautious about voicing too much optimism given experts’ predictions that the peak of infections isn’t likely to hit in Connecticut until late April and early May. Thus far, the state has recorded 380 COVID-19 related deaths.

While the rate of coronavirus hospitalizations has eased in Fairfield County, it has increased in regions to the east and north. Hartford County had the largest number of new hospital patients with COVID-19 since Wednesday with 25, while New Haven County had another 19 people enter hospitals.

Connecticut schools, bars, restaurants and many other businesses will remain closed “at least” until May 20, Lamont said. “I wouldn’t be surprised that May 20 date gets extended as well,” he added.

The governor was also upbeat about Connecticut’s efforts to obtain badly needed personal protective equipment and other medical supplies for health care workers. The state now has orders out for 18.8 million units of equipment like N95 respirator masks, surgical masks, gloves, gowns and other related items, at a cost of about $50 million. Lamont said an order of 200,000 masks arrived Wednesday and he insisted the state and hospitals are doing a good job “managing the limited stock we have.”

The situation isn’t improving enough, however, for students to return to their classrooms. While Lamont’s previous executive order specified that schools should stay closed until April 20, experts now expect COVID-19 infections in Connecticut to peak during the last part of April and early May. The governor also hinted that businesses need to remain closed as well, saying he assumes “that you can see the same thing in terms of bars and restaurants and some of out other businesses” that will likely be required to stay closed at least through May 20.

The administration’s decision to set the school closure date at May 20 — rather than deciding now to keep schools closed for the remainder of the school year — is an effort to keep parents, students and educators engaged in learning. Officials feared that cancelling school for the whole year would lead to students becoming disengaged until a new school year begins in late August.

The governor has signaled on multiple occasions, however, that school may likely be closed for the remainder of the year. If school does resume after another month break, it means students would come back for just three or four weeks before summer break begins.

To date, the leaders of 16 states have ordered their schools be closed for the remainder of the school year, reports Education Week, a national news outlet that is tracking school closures. In this region of the country, however, Vermont is the only state that has closed school for the remainder of the school year. School in New York and Massachusetts are currently ordered to be closed through the end of this month.

State Education Commissioner Miguel Cardona on Tuesday made a recommendation to local districts about how to handle grading during these extended school closures. He emphasized that while final decisions about grading are left to local officials, the department recommends that districts focus their energies on student engagement and learning and less on actual grades. Switching to pass/fail grading, he said, will help districts determine who moves on to the next grade and who graduates.

The administration is considering increasing summer school programs to make up for some of the learning that will surely be lost during these two months that school is closed. Lamont said he has “strongly recommended” that some additional educational programs be set up over the summer and paid for by The Partnership for Connecticut, which is a partnership between the state and billionaire philanthropist Barbara Dalio.

Cardona also said the state is also considering spending some of the funds headed to the state from the federal CAREs act to create “a bridge program.”

State and federal officials said during the conference call with Lamont Thursday that Connecticut businesses, homeowners, motorists and self-employed workers can all expect financial relief to start arriving within the next few weeks despite some problems processing thousands of applications.

Mark Hayward, the district director for the federal Small Business Administration, said that “hundreds of millions of dollars” in federal emergency loans have already been approved for Connecticut businesses and that the money should start flowing within the next couple of weeks.

Hayward acknowledged that there was “a glitch in the system” that had resulted in some documents being lost that were submitted by Connecticut businesses applying for the federal Paycheck Protection Program. He said that “some documents didn’t upload properly” and that those businesses are being asked by email to resubmit the information.

State Banking Commissioner Jorge Perez said that most homeowners with residential mortgages can get their payments deferred for up to six months as a result of financial problems linked to the coronavirus pandemic. Perez said most people with federally backed home mortgages will be able to extend their payments by about 180 days.

Gwendolyn Thames, deputy commissioner of economic and community development, said the state has already received more than 5,000 applications from small businesses for the state’s Connecticut Recovery Bridge program. That program initially started out with $25 million but was increased to $50 million because of the overwhelming demand.

Thames said she believes the state will start to “get the money out to our businesses by the end of the month.”

Insurance Commissioner Andrew Mais said people with financial issues stemming from the pandemic will be given a 60-day grace period for health insurance premium payments and that “nobody will get cancelled for non-payment.”

Mais also said that a number of Connecticut companies that insure motor vehicles have agreed to reduce auto insurance premiums by as much as 15% during the pandemic to reflect the reduced risks of accidents because there is so little traffic on the roads now.

Sadly, this should be no surprise. This awful disease will remain endemic globally until a vaccine is developed or herd immunity, inevitably always measured by each locality, is achieved by broad infection in the population. I see no easy out.

I hope our elected and appointed officials will ensure that a safety net is available for those in need. I, personally, am fine with higher taxes to make that possible.

Gov Lamont is doing a steady and careful job; thank goodness we have a competent person in charge.