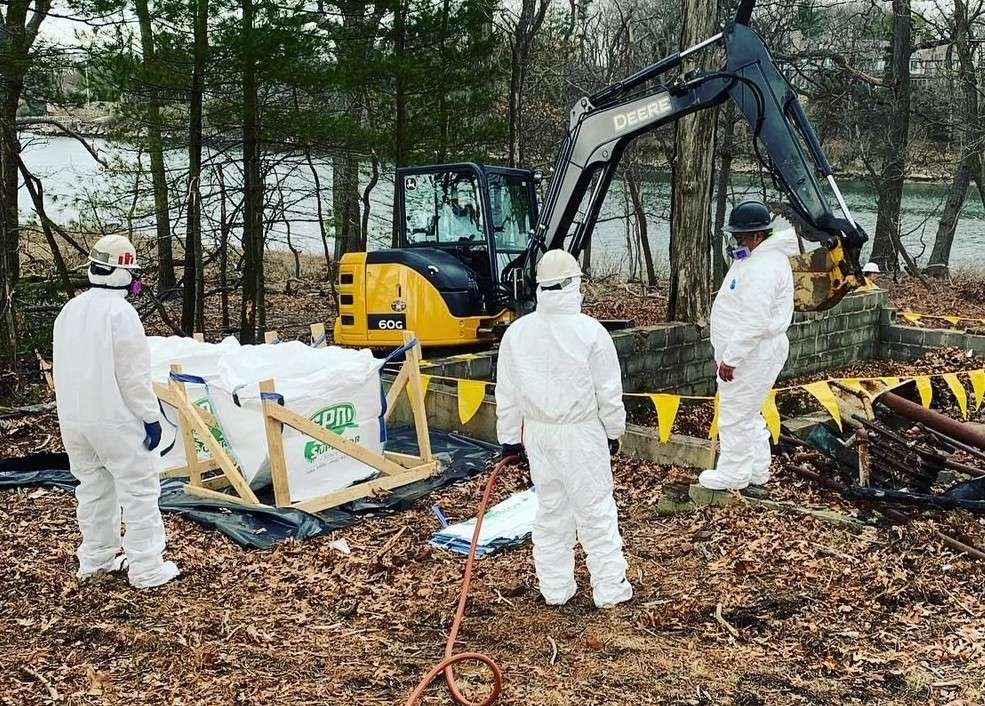 NORWALK, Conn. — The Norwalk Land Trust is seeking $200,000 of City funds to clean up contamination on Hoyt Island.

“This is a huge, huge project for us, we need help. And you guys have always been a been there for us when we needed help,” Norwalk Land Trust fundraising chairperson Midge Kennedy said to the Conservation Commission recently.

Although the Land Trust got a $100,000 grant from the State in 2018, through State Senate Majority Leader Bob Duff (D-25), the costs to clean up asbestos and PCBs (Polychlorinated Biphenyl) have escalated, Norwalk Land Trust Board President Seeley Hubbard said. Toxic materials are there in “heavier concentrations than we thought were possible” and it’s estimated that $300,000 is needed to remediate in accordance with Environmental Protection Agency and Connecticut Department of Energy and Environmental Protection (DEEP) guidelines.

Hoyt Island is one of 27 so-called Norwalk Islands in Long Island Sound and lies 500 yards offshore near Village Creek, a saltwater inlet, according to the Land Trust’s website. The three-acre island was donated to the Land Trust in 1979 by Countess Elinor Czapski for protection as a bird sanctuary/nature preserve.

There was a caretaker’s cottage on the island, as the owner lived in Wilson Point, Hubbard told Conservation on May 11. Vandals burned down the abandoned cottage in 2008, and the PCBs, asbestos and “other materials” went into the ground.

Kennedy said the cottage probably dated to 1920 “or something like that” and when it was set ablaze, “the fire department did not respond and put out the fire. So the fire burned all the way down to the foundation material.” “We started this project when a kayaker found the carcasses of Terrapin, of Diamondback Terrapins, in the foundation,” Kennedy said. “So the animals using – and we have 130 bird species, it’s on the Atlantic flyway. We had animals and whatever on this island, the turtles and the terrapins were falling into the foundation getting stuck there looking for nesting sites. So they’re dead. And we’re in the Norwalk Land Trust. And we said we’ve got to fill in this foundation.”

The request for funding drew much pushback from Conservation Commissioner John Levin, running the meeting in the absence of Chairman John Moeling, who recused himself.

“Based on my reading of the city statutes that establishes the Open Space Fund, because this use would not increase the amount of open space, it’s my understanding that that this application does not qualify as a permitted use,” Levin said.

Commissioner Matt Pentz said granting the Land Trust’s request would use up 75% of what’s in the Open Space Fund. It would take four or five years to replenish and “it’s just, it’s a, it’s a big ask…. it puts us in a tough position, from my perspective.”

The cottage was not open space, Hubbard said.

“It’s a space that has to be remediated and restored to open space, and, and that’s exactly what the Land Trust is doing,” Hubbard said. “That property is going to, not only do they have to carve away all the toxic materials that are on that, on that particular part that is contaminated, but then they’re going to fill it in and replant it with native plants and restore it so that the 120 species that depend upon that island, and also the surrounding communities that might get affected…  the State and the EPA are concerned about this leaching and the PCBs leaching into the, into the waters.”

Commissioner Cheryl Brown said she agreed with Hubbard, “this is not true open space.” The Commission could “potentially use this money for something that would be really great, to make a piece of Norwalk better, to make it, you know, a thriving habitat, (instead of) something that’s not going to not only poison the birds and animals, but also potentially the people.”

“I fully understand that the Land Trust is in a pickle here, and again, you know, this, this is a hard one, but my heart goes out to you, I’m sympathetic,” Levin said.

The remediation “would not change the amount of acreage that the Land Trust owns but it would change the amount of natural open space that the Land Trust owns,” Hubbard said. He explained that the clean up is expensive because the materials have to be loaded onto a barge, then onto trucks and taken to Michigan. “Michigan is the closest facility that can treat PCBs from Connecticut.”

Levin asked if there’s another way for the Land Trust to raise the money. Hubbard reported that according to Duff, the State isn’t in a position to fund it.

“I am certainly working very hard right now to find other alternate funding sources in case that’s required,” Kennedy said. “It’s something I personally feel very strongly about that we as citizens need to take care of open festering sores like this when it’s right in the middle of Long Island Sound.”

The Land Trust voted to go ahead with the project, partially because the $100,000 grant has a one-year timeline and the Land Trust didn’t want to lose it, she said. Hubbard reported that the $300,000 worth of work was nearly complete, though the Land Trust hadn’t yet gotten a bill.

“If we don’t get funding here, it’s going to be on the Norwalk Land Trust and $200,000 for our organization, is a real hit,” Hubbard said.

The Commission voted to table the request and is expected to take it up again tonight, Tuesday May 25.

John Levin is a Chapman Hyperlocal Media Inc. Board member.

What would Norwalk be without the Sound?
Let’s take care of it, and make it as prosperous and healthy as possible.
Please help the Norwalk Land Trust. Maybe the fishermen can contribute?? It takes a village.