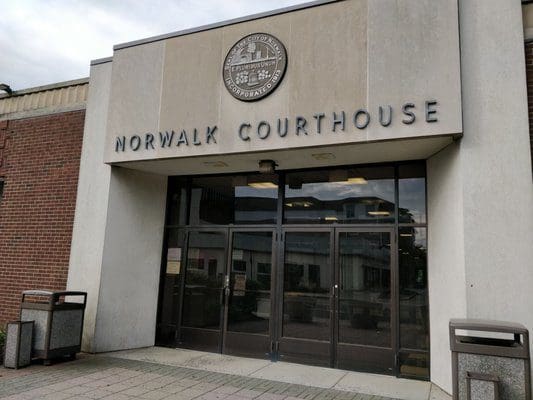 NORWALK, Conn. — Norwalk Police officers are going to Stamford to process arrests. Attorneys and their clients are in the same boat, as is and anyone else who would, pre-COVID, go to the Norwalk Courthouse.

Connecticut courthouses were shuttered due to COVID-19. While most have reopened, “Judicial Operations remain suspended in both the Enfield and Norwalk Court,” Rhonda Hebert, Program Manager of Communications for the Connecticut Judiciary said.

Everyone’s going to Stamford, which is short on judges, according to States Attorney Paul Ferencek.

“It causes a lot of inconvenience to local residents who work at the courthouse, let alone those who use it. And here we are the sixth largest city in the state, without something that’s the symbol of the embodiment of the rule of law. It seems silly,” Corsello said.

“Operations remain suspended in these two locations, Enfield – a one-judge courthouse, and Norwalk – a two-judge courthouse, to provide for the most efficient use and deployment of Judicial Branch resources and staff, significantly security staff, as the Branch continues to manage its operations in the face of pandemic-related challenges,” she wrote.

“Whenever I go to the Stamford courthouse, there’s certainly no dearth of marshals around and about,” he said. “As far as having manpower to cover Norwalk, I can’t imagine that’s the case but the priority is getting services into these courthouses. I mean, Derby is a very small courthouse, two judges, and Ansonia-Milford, are both part of the same geographical area. Both of those courthouses, which utilize multiple judges are open, and they don’t have any close to the volume or the traffic issues that we have down here.”

He said, “I just can’t imagine what the explanation is …If you need more security than you hire more security. That seems to me a very small price to pay to keep our court system operating efficiently.

If you combine the geographic areas ordinarily served by either the Stamford or Norwalk courthouses, you find the population served is the largest one for any G.A. in the state, the Connecticut Law Tribune wrote in a Sept. 30 opinion.

Norwalk historically ranks seventh or eighth in the state for its level of court business, the Tribune continues, asserting, “Given the state owns the Norwalk courthouse and Norwalk personnel are still employed and reporting to Stamford, there is no visible financial advantage in not operating in Norwalk.”

Ferencek, speaking to the New Canaan Police Commission recently, said Norwalk and Stamford had six judges between them, pre-COVID. Now, “We have four judges, plus one judge that’s a part-timer or who does both civil and criminal.”

He said, “Stamford is a growing community, Norwalk as well, to give this Judicial District four judges I think is really problematic.”

“As recently as February there was a 50-judge shortage in Connecticut. Because of that shortage and because of the pandemic, Norwalk Court functions were sent to Stamford,” Mayor Harry Rilling said. “We’ve had no indication of when there will be more judicial appointments. Chief Court Administrative Judge Patrick Carroll is communicating with the Governor to resolve the situation.”

On Friday, State Senate Majority Leader Bob Duff (D-25) said, “I had a conversation with Judge Carroll this week. In fact, his office and mine have been in regular communications for many months regarding the status and re-opening of the Norwalk Courthouse.”

He said, “It has been represented to me that the courthouse will in fact open again. The exact date is not known. As we come out of the pandemic and court operations continue to increase, the need to utilize the building will be greater.”

Corsello spoke of fighting rush hour traffic to get down Interstate 95 and make it to the courthouse by 9 a.m.

“It’s causing a tremendous backlog of cases,” he said. “And it’s got to be a strain on local law enforcement; every time they want to get a warrant signed or transport a prisoner they have to drive all the way to Stamford in order to do it. Especially some of the suburban departments like a Weston, they might only have three, three or four policemen on duty at a time. If two of them have to spend it traversing 95 back and forth to Stamford, that doesn’t leave the town very well protected.”

Norwalk Police Chief Thomas Kulhawik confirmed, “We now bring prisoners and paperwork to Stamford Court. We also go there to have warrants signed since Norwalk is not open.”

Ferencek said the backlog of cases began when all the courthouses closed.

“Stamford was fortunate in July to have done a jury trial that went to a verdict but …other than that case, from March 2020 to now, we have not done any jury trials. Other than that one, we’re backed up incredibly,” Ferencek said. “…We have 31 pending homicide cases sitting in this jurisdiction.”

There used to be two or three jury trials going on concurrently in Stamford and Norwalk and, “Now we have less judges, we’re lucky if we can do one. So we are really at a crisis point where we need we need judges to hear these cases we have, you know we have enough staff, but we need judges.”

I guess people should write the governor. I have a friend who filed for divorce in Spring of 2021. She has a court date of 2022. When she said that, I didn’t realize that it had to do with Norwalk’s Courthouse still being closed. That’s ridiculous! And to make matters worse The spouse doesn’t have to leave the home until the divorce is final.

Yes letters definitely need to go to the governor, this is insane. I never even realized that the courthouse was still closed because all the rest of them are open.

Thanks Nancy for shedding light on this.

Perhaps a stupid question (that won’t stop me) – is there anything that prevents some court activities from being performed in a Zoom format, assuming all parties find that acceptable?

I’m really confused on the delay. The people most who are suffering the post are the less fortunate. The people with no car, low on funds etc.

A petition is coming soon. Enough is enough.

The real problem is the Dems closed the prisons and released the inmates. The costs have escalated dramatically by closing the criminal court. The claim is that crime is down because it is unprosicuted or unprocessed. The Republicans are focused on juvenial crime the dems say it doesn’t exist? Sanctuary States, even in the Constitution State are not enforcing the law.

That said, various state budgets over the last 20 years have proposed the closing of the Norwalk courthouse. Our local legislators (both Democrat and Republican, to be fair) have successfully prevented its closure.

Norwalk is in a weird situation — the six largest city in the state, situated equidistant between #1 (Bridgeport) and #3 (Stamford), with continuous pressure to strip us of State services delivered on a local basis. We lost our State Department of Social Services offices in the early 2000’s. We lost our State Department of Children and Family Services offices not long after that. Does anyone remember when Norwalk had a Department of Labor Unemployment office on Wall Street? It wasn’t that long ago.

We’ve seen the pattern. Close down Norwalk offices for state agencies, and trek us to Bridgeport or Stamford. The only people who can stand in the way of this trend — the only people who can keep the “temporary” closure of the Norwalk Courthouse — are our local state legislators. We’ve lost so many state services locally over the years. Please make sure that if we go 35 in a 25 we don’t have to spend 2 hours driving to Stamford and back.

It’s interesting that Jonathan Riddle, Republican mayoral candidate, addressed how the Norwalk court house continues to remain closed in his OpEd on October 7th and today the Dems jump on the same bandwagon. If I recall, they did the same stealing of ideas when Lisa Brinton ran for mayor. It’s time to elect the folks with the ideas and solutions.

You wait more than 9mos to have to go to Stamford court for what they accused you of 2Dwi. You have no license no car, can’t drive cause you can find a job waiting on this. Now they tell you come back in Dec to be sentence. WHAT THE __ _ _ _!!!!
It all should be drop. Waste of tax payers money!!!!

Considering how populated Norwalk is and the rise in crimes the courthouse should be open , as due process is an essential. It’s the law / right of all defendants.

Let me preface my comments by saying that I do have a family member who works in the Norwalk courthouse. I think attorney Corsello’s words are so on point. However, “silly” doesn’t even begin to cover it. Ms. Hebert says the courthouse is suspended not “closed”. Let me understand – ALL the Norwalk files have gone to Stamford – that sure sounds like “closed” to me. Senator Duff says he’s had regular communications for many months. Well, we can see how far that’s gotten things. And what about the victims who would normally be going to Norwalk. How long do they have to wait to get justice? Seems like the local officials might show a bit of outrage for the citizens they are suppose to be representing. By the way – the state is paying travel time to the Norwalk workers (except those who live in Stamford). They are paid from Norwalk to Stamford. Given our economy it would seem there are better ways to spend the taxpayers money.

It is now November and still no movement on the reopening of the Norwalk Court House. Ms. Hebert’s statements are a little misleading. First, there were two Judges assigned to the Criminal Docket, operating out of two Courtrooms. However, there was a third Courtroom that handled Evictions and Small Claims. Further, there is a fourth Court Room that handled motor vehicle violations. Additionally, the two Judges assigned to the Norwalk Court House handled hundred of cases per day. Those five hundred or more cases that were heard over a five day period have now been compressed into two “Norwalk Days” in Stamford. Those of us who are in Court on a regular basis know the “system” is broken. We have raised the alarm but, it will be up to the citizen’s of Norwalk, Wilton, Westport, Weston, and New Canaan to contact their State Representatives and demand that the Norwalk Court House be reopened or, at a minimum, a valid explanation given. But, if you listen carefully you can hear the sound of fiddles coming from Hartford.