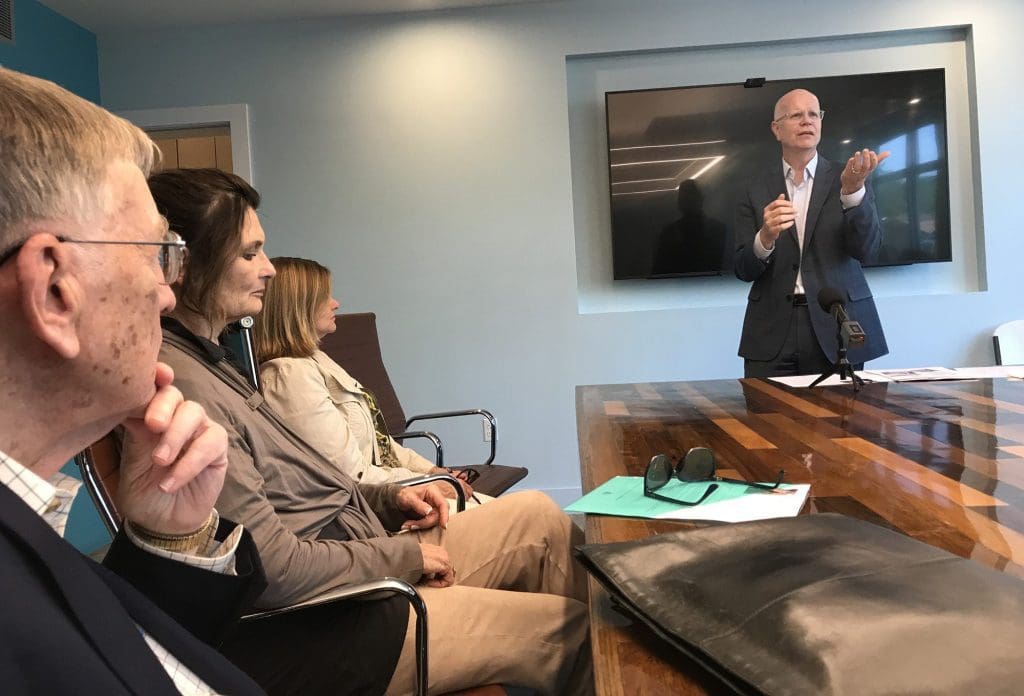 Proposed legislation says that “one way or another, the state has to help disrupt this (healthcare) market. For a decade, I’ve been waiting for a private entity, a private carrier to come in and disrupt that, put downward pressure on pricing,. bringing everyone else hopefully down, that hasn’t occurred,” Lembo said at the Wall Street Neighborhood Association meeting.

Lembo’s visit was arranged by former Mayor Bill Collins on behalf of Connecticut Citizens Action Group (CCAG). Lembo explained his thoughts on House Bill 7267 to about 15 people in the offices of Mike DiScala at Head of the Harbor South.

Lembo said he left the capital as his staff was negotiating with Gov. Ned Lamont and the legislature on the bill, with a possible announcement on Thursday.

The bill would establish a ConnectHealth plan to be sold to companies with fewer than 50 employees. It has generated much pushback, Lembo said, explaining that it would “bring small businesses as an option into a plan that will be designed by my office and a full risk sharing relationship with the state employee plan, not at the state employee benefit design, because we know that’s not affordable for most people.”

Lembo pointed out that as comptroller he buys health care for a 250,000 people and, “We’ve got a lot of good smart forward thinking things on how we deliver this benefit in a in a better way. And that’s great, you know, because we’re saving $30 million for taxpayers, $80 million dollars for taxpayers, 180, just last year, year over year.”

“By any economic analysis, it’s failing market,” he said. “There are fewer and fewer competitors in the market, the pool of people is getting sicker and sicker…. we could sit around waiting for something positive to happen, keep doing the same thing over and over again. But that’s the definition of something we all know what that is.”

“You would get and see an immediate price relief,” he asserted, explaining that he doesn’t have stockholders and can do things for a 2% administrative cost versus 18% in the private market, meaning a “15% savings without trying very hard.”

“My hope is that if we get a product in the market, it would put that downward pressure on pricing, those that still want to compete would lower their prices and compete. And we would change the dynamic,” he said.

CTNewsJunkie reported on May 2 that some Democrats oppose the bill and Republican lawmakers unsuccessfully attempted to use a parliamentary procedure to kill it.

Outisde lobbyists are helping inside lobbyists and “I think the battle lines are clear and a negotiated settlement is possible,” Lembo said. “…If it goes well, we will have a press conference tomorrow with the governor legislative leaders to announce where we are. That doesn’t mean it will necessarily pass. It just means leadership agrees and then they have to persuade the members to vote.”

He asked supporters to call their legislators because “if we don’t get it going, it’s going to die on the vine.”

Mike McGuire asked if medical costs would be published with the proposed health care plan to be developed.

“To get to the savings would likely going to have something akin to a narrow network, meaning high quality, moderate to lower costs,” Lembo replied. “So people are going to know that buying in, that all of that information will be in is right now publicly available to the people that we work with… We do a lot of work around transparency. And we have a smart shopper program.”

But not a word about reducing taxes that’s had a devastating effect on CT’s decade long stagnant economy and sending business a message that new taxes are coming to hard pressed CT.

This is a ruse – the true intent of the bill is to transition the sate to full government run healthcare to sustain and expand the welfare state. It will re-institute the very unpopular Individual Mandate, levy more taxes, and force folks to purchase insurance they don’t need or can’t afford. Don’t be fooled into thinking the state can manage your healthcare more efficiently than the private sector.

@Piberman – this is infact another tax by reintroducing the penalty for not having insurance to fund the state’s medicaid pool. What a joke! If CT were serious about lowering healthcare costs they would scrap the constraints of Obamacare’s “one size fits all” provisions and invite insurance companies to tailor plans to the business community needs. This would be a disaster if passed.

This is GREAT news. This will help what is already an improving economy.

If you thought 6 hours at the DMV for simple paperwork or taking an hour every day to get to Stamford was bad, just wait until our state government gets more involved in health care. And pray to God you never get sick.

@Ron Morris – this is far from great news and will be a train wreck. How is forcing individuals who are not eligible for subsidies and can not afford these very expensive ACA plans benefiting the middle class? Just the contrary – it breaks the middle class and further adds insult to injury by having them pay a penalty to subsidize the free loaders. Connecticut continues to evolve into a true welfare state.

I would also suggest you study the high rates of these plans and how financially devastating it will be to force those who can not afford/don’t receive subsidies before opining on how “great” this is. Even with the 20% highly suspect discount these legislatures are making it will still not be affordable.

The partisan hand-wringing is so typical. The individual mandate was killed. This proposal would allow more people to have health insurance – something that’s automatically provided in every other civilized nation. Our infant mortality rate leads the “first world.” Women between 15-45 are more likely to die today than they were 50 years ago – largely because they have to make hard choices about medical care, I.e., do I buy groceries or visit the doctor this week. This insanity has to stop.

Obamacare is a failure. It is not surprising the typical leftists in Hartford want to resurrect a proven failed policy in a grandiose fashion – Republicans must filibuster this. The state can not manage its own affairs let alone attempt to be more efficient than the insurance companies and speculate in the health insurance market . Someone also should clue these legislators that most of the insurance companies no longer offer Obama policies due to the severe financial losses sustained. Healthcare, like any of life’s essentials, is never a right and must be earned. . .Further to the commentator above, if you can not afford to have babies, don’t bring them into this world. High infant mortality is more correlated to poverty than healthcare.

Isn’t this the same Kevin Lembo who as controller for Malloy told CT taxpayers CT was not in a budget deficit just before last Malloy election? He couldn’t count then, so why is to be trusted now??

So, some will get what they hoped for. More people unhealthy and dying because of unaffordable healthcare! Thanks, Cigna. https://www.ctinsider.com/local/thehour/article/Cigna-s-threat-to-leave-CT-sinks-public-health-13905222.php

Yes, thank you Cigna for saving precious CT insurance industry jobs and blocking Venezuelan style rationed healthcare! It is somewhat fantastical and audacious that state legislatures largely responsible for driving the state into the financial abyss believe they can drive healthcare costs by competing with the private sector. CT must grant waivers to the insurance companies and begin offering non-Obamacare plans to make healthcare affordable again to make healthcare affordable again.

Cigna gets what it deserves. If no one remembers, they were one of the first beneficiaries of Malloy’s crooked first five program.