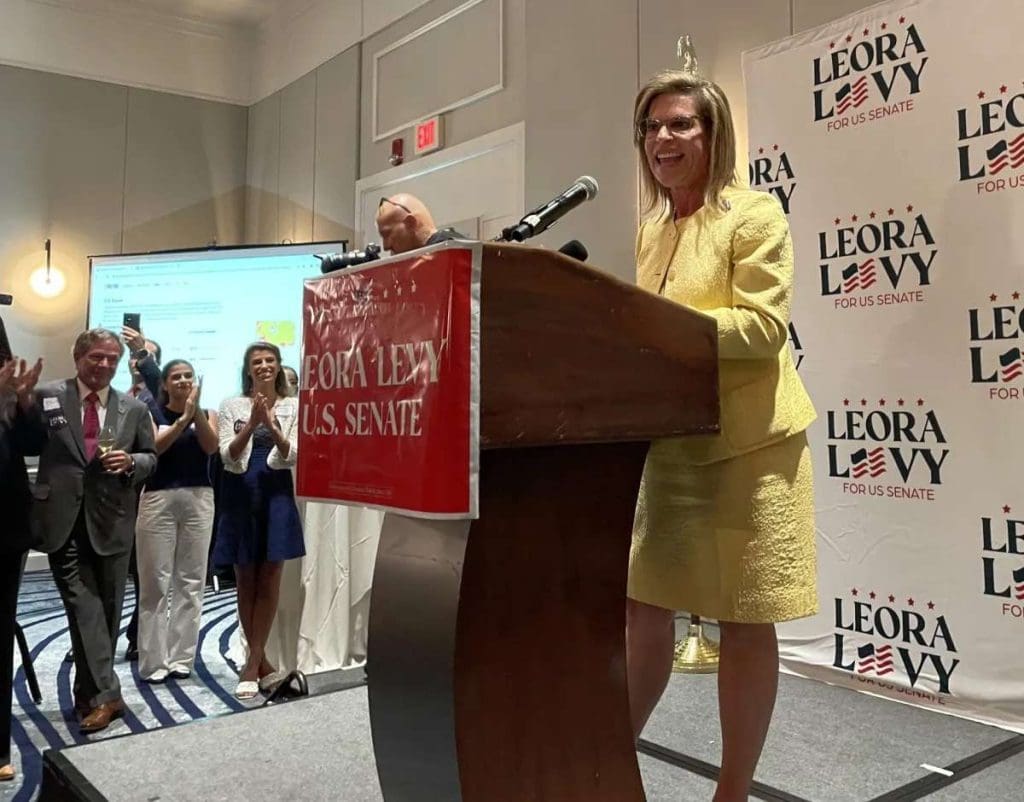 Levy, 65, of Greenwich won a three-way primary over Klarides, a social moderate who broke with Trump, and Peter Lumaj, a Trump loyalist who seemed destined to split the conservative vote until the former president endorsed Levy.

The victory of a Trump proxy who unabashedly appropriated the president’s rhetoric, opposed reproductive rights and effectively mocked the establishment for its choice of Klarides is likely to reverberate through November.

With 98% of precincts reporting, Levy had a convincing victory with nearly 51% of the vote to 40% for Klarides and 9% for Lumaj. Turnout was about 20%.

Jayme Stevenson easily defeated Michael Goldstein in the only other congressional contest, the Republican nomination in the 4th Congressional District.

Levy took the stage at 10:30 p.m. to accept her party’s nomination. After thanking her family, her supporters and her campaign team, Levy acknowledged her most important backer.

“I would like to thank President Trump for your strong, clear, unequivocal endorsement, your belief in me. I’m so honored that you have chosen to support me and to have your confidence, and I will not let you down,” she said to a jubilant crowd of about 100 supporters at a hotel in Greenwich.

She said she was “upset and offended and disgusted” at the FBI’s investigation and raid of the former president’s Mar-a-Lago residence on Monday, the same day Trump conducted a rally-by-telephone for Levy. “That is un-American. That is what they do in Cuba and in China,” she said.

Levy then quickly pivoted to her next rival, U.S. Sen. Richard Blumenthal, a two-term Democrat heavily favored to win a third term in blue Connecticut. When she called out the incumbent’s 40-year tenure in state and federal office, the crowd groaned.

“He has had a major role in creating every single problem and challenge our country is facing today, and he has been a rubber stamp for Joe Biden’s failed policies,” Levy said, ticking off inflation, rising gas prices and what she described as “general lawlessness in our state.”

“It feels like things are spinning out of control,” Levy said. “We’re kind of off-kilter.”

Levy reminded supporters of her opposition to job-related vaccine requirements, and abortion and transgender rights. “There is a difference between boys and girls,” she said. “Boys do not belong in girls’ sports or in their locker rooms.”

She closed with a nod to her immigrant background. Having emigrated from Cuba in the 1960s, Levy said, she believes in the American dream. “Thank you. Que Dios te bendiga, which is ‘may God bless you.’ And may God bless the United States of America.”

Shortly after she’d concluded her remarks, Levy received a phone call from Trump, congratulating her on her victory. She brought the phone back into the banquet hall, put it on speaker and held it to the mic so everyone could hear — as she did at a Republican cookout in Montville last week, when Trump called to endorse her. 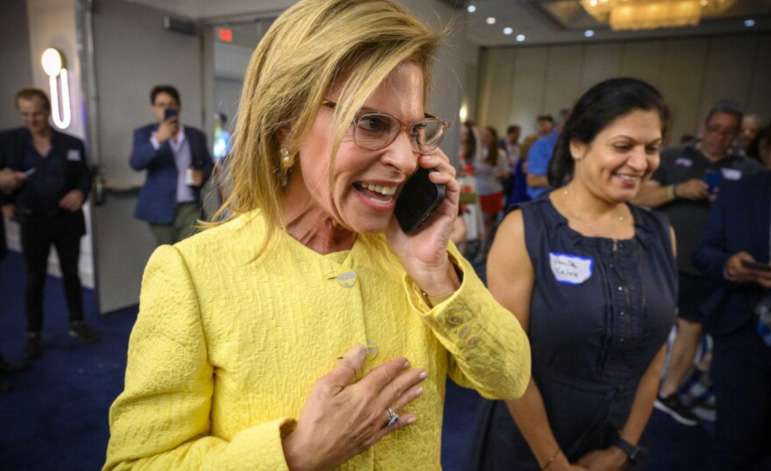 Leora Levy steps away from her victory party to take a congratulatory call from Donald J. Trump. She returned and held up the phone for Trump to address the crowd. (Mark Mirko, CTMirror.org)

“I want to congratulate everybody in that beautiful room, everybody in the state,” Trump said. The crowd hung on every word. One supporter yelled, “Save America!”

But the booing underscores the difficulty now facing Levy and the Connecticut Republican Party: Like Trump, who never expanded the base that elected him in 2016, the GOP shows little sign of political practicality. 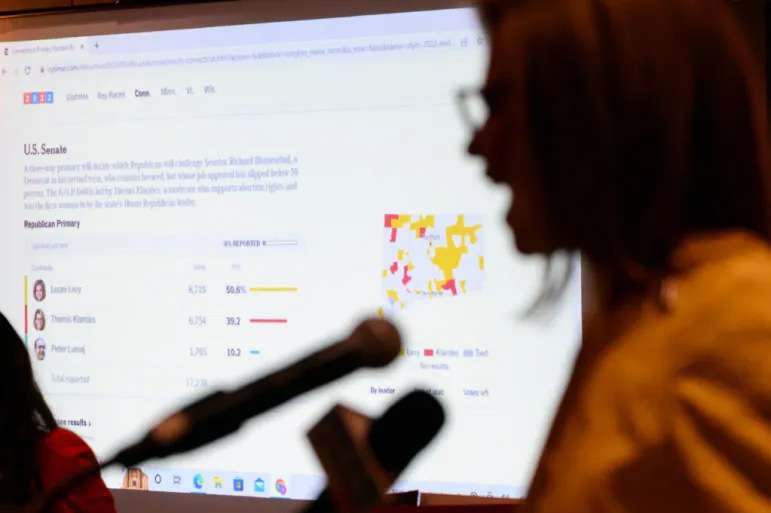 Trump and Levy both mocked Klarides and her supporters as establishment insiders.

Klarides texted a concession to Levy then briefly addressed her subdued supporters at her headquarters in Middletown, including members of the House conservative caucus. House Minority Leader Vincent J. Candelora, R-North Branford, took results with Klarides, but was gone before her concession.

“I congratulate my opponent,” Klarides said. To her former colleagues in the House, she said, “As always, I love you. I’ll always love you. We are family.”

She left without taking questions.

Earlier in the day, Klarides was asked what a Levy victory would say about the Connecticut Republican Party.

“The answer is that maybe people would rather have our party be more conservative. And that’s their prerogative, that’s their decision. But unfortunately, you can’t put a square peg into a round hole,” Klarides said. “The makeup of Connecticut is what it is.”

To Klarides, the square peg is a conservative Trump loyalist, and the round hole is a state where Trump’s election ended a long of Republicans making gains in the General Assembly.

Konstantine Wells, 34, a supporter at Levy’s victory party, said he thinks Levy is “a force to be reckoned with.” Wells, who lives in Greenwich and works in finance, said he’s known Levy for over a decade, since his days leading the Young GOP of Greenwich.

“I think this is a sign that people don’t really have a tolerance for the establishment Republican party anymore, even in a state like Connecticut,” Wells said. “She is highly intelligent, she is strong in her convictions, she has never strayed from her message and she has always been on-brand for Leora, if that makes sense.”

Before the polls closed, Democrats predicted that a Levy victory on the heels of a Trump endorsement would be a disaster for the GOP and an organizing gift for Blumenthal, Gov. Ned Lamont and down-ballot Democrats.

“It would be an enormous victory for Donald Trump in Connecticut, and that he’s taken over the Republican Party, if that happens,” Lamont said. “I never thought that was possible.” 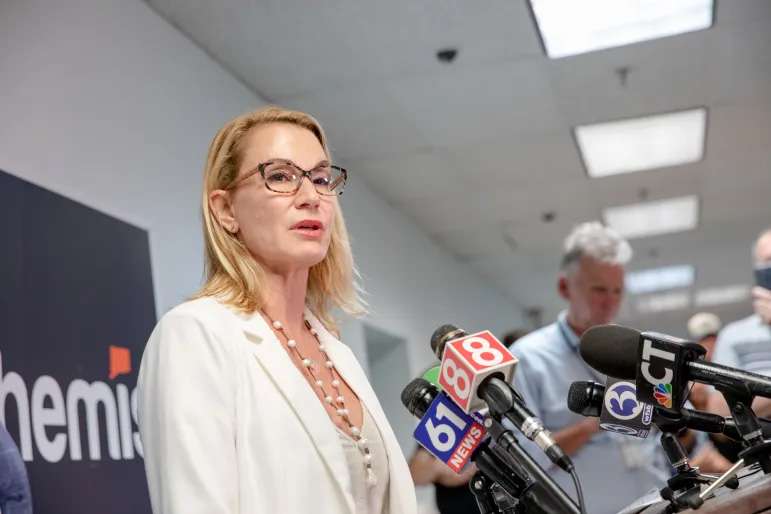 Bob Stefanowski, the Republican candidate for governor, has labored to distance himself from Trump and the abortion issue, but he now will share a ballot line with a Trump acolyte whom he supported with $5,800 in contributions.

Blumenthal, a two-term Democrat, has seen his approval rating weaken as inflation spiked and President Joe Biden’s popularity tanked, but he remains formidable and well-financed in a state with Republicans holding no federal or statewide office.

It has been 30 years since a Republican won a U.S. Senate seat in Connecticut, and the winner was Lowell P. Weicker Jr., whose progressive views led to his excommunication by the GOP.

“We don’t live in the Deep South. We don’t live in a highly conservative state,” Klarides said. “So we have to face the reality. Do we want to take a U.S. Senate seat for the first time since the 80s?”

Klarides, 57, had constructed her campaign around messages of electability and pragmatism, arguing that her support for abortion rights and the post-Sandy Hook gun law might be unpopular on the right, but in the Connecticut mainstream.

“It’s about nominating a person who actually has the best chance to beat Dick  Blumenthal,” Klarides said as she campaigned outside a polling place in Trumbull, where only 135 of the precinct’s 917 Republicans had turned out by 5 p.m.

Klarides, who won 11 elections in a House district that grew more Democratic over her 22 years in office, was the only candidate in the field who had won an elective office. U.S. Senate Republican candidate Leora Levy arrives to a round of applause from supporters at her primary night watch party in Greenwich. (Mark Mirko, WNPR)

Levy, a member of the Republican National Committee for a half-dozen years, had never been on a ballot. Lumaj, an immigration lawyer and real-estate investor, was seeking statewide office for the fourth time.

But in praising Levy, Trump mocked the support Klarides enjoyed by moderate Republican governors who had won in blue states: Charlie Baker of Massachusetts, Larry Hogan of Maryland and Chris Christie of New Jersey.

He called them “establishment sellouts and RINOs, really, losers.”Throughout the day, Republicans debated who was more likely to turn out on a steamy August day: Party regulars who typically vote for the party-endorsed candidate on the top ballot line, or the followers of Trump?

Conservatives supported Klarides at a state convention that she won with nearly 57% of the vote. Members of the House conservative caucus, including Rep. Mike France of Ledyard, the congressional nominee in the 2nd District, backed her.

France was among the Republicans at Klarides’ headquarters in Middletown on Tuesday.

Trump’s election in 2016 was disastrous for Connecticut Republicans.

Republicans had lost all but 37 of the 151 seats in the Connecticut House in 2008, then steadily climbed back with a disciplined focus on economic growth and fiscal responsibility in a state with a stagnant economy and crushing debt. Klarides was an architect of that template.

In 2016, the GOP won half the Senate and came without a half-dozen votes of carrying the House and making Klarides the first Republican woman to serve as speaker. Two years later, Democrats crushed in the midterms, making their first gains in the General Assembly in a decade.