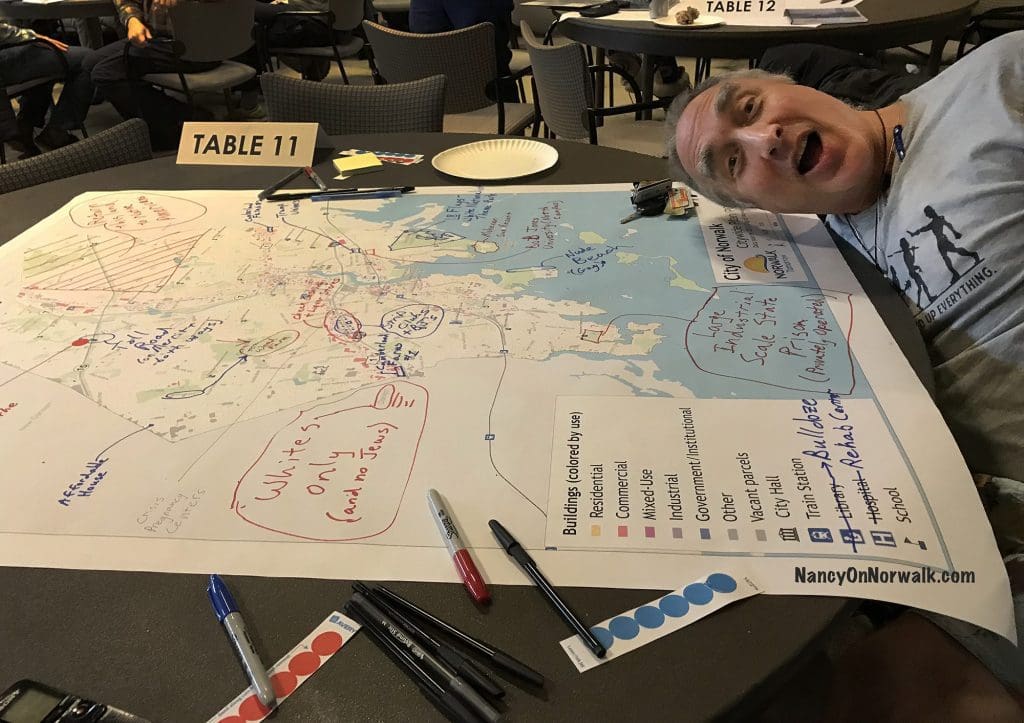 Levin didn’t get up to share his thoughts at a November Norwalk Tomorrow visioning forum but attracted a few appreciative onlookers after the event ended.

“I love it,” Tod Bryant said, while a man who would only identify himself as “Leon” offered his own ideas, asking if the nude beach would be for gay people.

“It’s hard to make a nude beach gay or not gay, but I think it should be marketed as a good gay destination,” Levin said.

Levin and his wife, Diane Keefe arrived late to the forum, and while she joined a group to make serious suggestions to the consult anting firm Stantec, Levin filled a map all on his own with squiggly lines and a signature wish list.

“This is the vision,” Levin said to admiring onlookers.

There would be a marijuana farm in Oak Hills Park.

“This is not a well-organized town,” Levin said, acknowledging that Weed Avenue is miles from the park, where the available land is.

“What we should do is rename the streets in West Norwalk,” he said.

Levin’s Norwalk would feature tolls on the Merritt Parkway (in both directions), and an an I.C.E. (U.S. Immigration and Customs Enforcement) office at the toll to catch incoming Mexicans.

Leon suggested that it also catch Canadians and maybe Columbians. 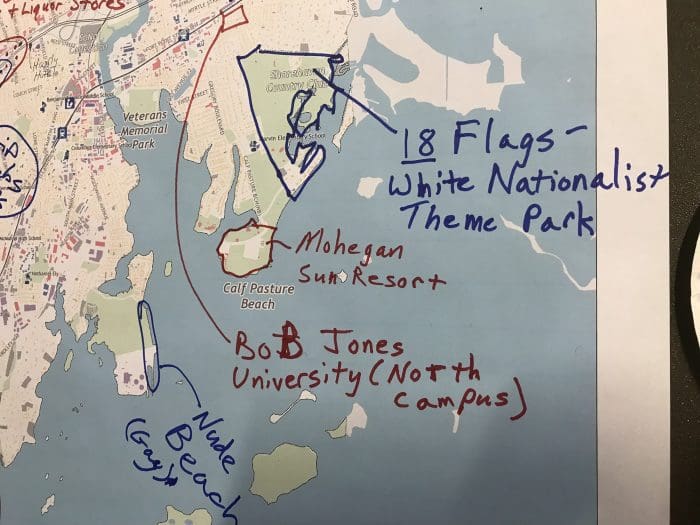 The Levin Norwalk would feature an affordable house – one – strategically located along the Darien border, and a Trump University in close proximity to the Bob Jones fans, on the other side of the tracks. The section of Norwalk that Levin lives in, which includes Cranbury Park, would be returned to the native Americans.

The library would be bulldozed and Norwalk Hospital would be turned into a rehab center.

Levin said he told Stantec consultants that they had to include his map, dubbed “Table 11 kicks ass,” in their official summary of Norwalk visioning. He wasn’t confident that it would be done, however.

It’s too bad, because the vision is well thought out.

Take, for example, his thoughts for Route 1, bookended on either end with a Cumberland Farms, one for Darien residents and one for the Westport crowd.

“This is planning,” he said, of Connecticut Avenue. “We have check cashing stores and the liquor stores and the strip clubs all located with hourly hotels on each end.”

Finally, under Levin’s plan, Norwalk’s new slogan would be, “Norwalk – where everyone belongs except those who don’t, and you know who you are!!!”

John Levin is Board chairman of Chapman Hyperlocal Media Inc., the parent company of NancyOnNorwalk.

Is this supposed to be funny?

How much fun is this?
Yet also several subtle messages…
Thanks for the chuckles…

I heart this vision, John. But I would like to see City Hall reimagined as a House of Horrors or maybe a Carnival Midway. The mayor’s job could be carnival barker. And commission seat opportunities could be “games of chance”, perhaps floating around like ducks or hidden behind balloons on a dartboard. OR Norwalk could be reimagined as a Monopoly board, complete with game tokens like a broken sidewalk token, a broken bridge token, an abandoned building wrappedin tyvek token, a Wall Street Train Station Hollogram token, and instead of plastic houses and hotels they could be made of matchsticks and your opponents could take turns trying to light them on fire. Oh, and let’s not forget a handy pile of “get out of jail FREE’ and “Tax Holiday!” Cards.

My only suggestion is installing warm water shrinkage control at the nude beach, for the guys. That’s something that would “make a splash” in my opinion.

I’m reminded of a joke told by former governor Lowell Weicker around 1992 that landed him in trouble with the good folks of NJ as I recall (I’m a former Jersey boy, born and raised at Exit 7 and college at Rutgers at Exit 9, which is why this joke stayed with me all these tears.)

I’ll try to tell it as I remember it as I couldn’t find it on line, so here goes:

Governor Weicker was being criticized for introducing CT’s first income tax to pay for a $3 billion deficit brought on by the recession of 89-90, so he came up with an alternate solution: charge all cars entering the state $1 that have NY or MA plates. The cars with NJ plates we’ll refuse entry to as we just don’t need the money that badly!

The governor of NJ took offense at the joke. As a CT resident at the time formerly from beloved Jersey, it just made me laugh!

Happy Easter, Passover, or just Happy Spring for the proud atheists like John Levin, or Ron Reagan Jr who gets the prize for best TV commercial that shows nationwide and is responsible for an epidemic of shattered TV screens in the Bible Belt. Gotta love it.

Thank you to John Levin for his wholehearted embrace of the zaniness of April fool’s day!
Cheers!

And rotaries. I see rotaries at all intersections around the Green with a carousel in the middle of each while pedestrians wait for crosswalks to be painted.

@Dave McCarthy not as funny as Responsible Norwalk.