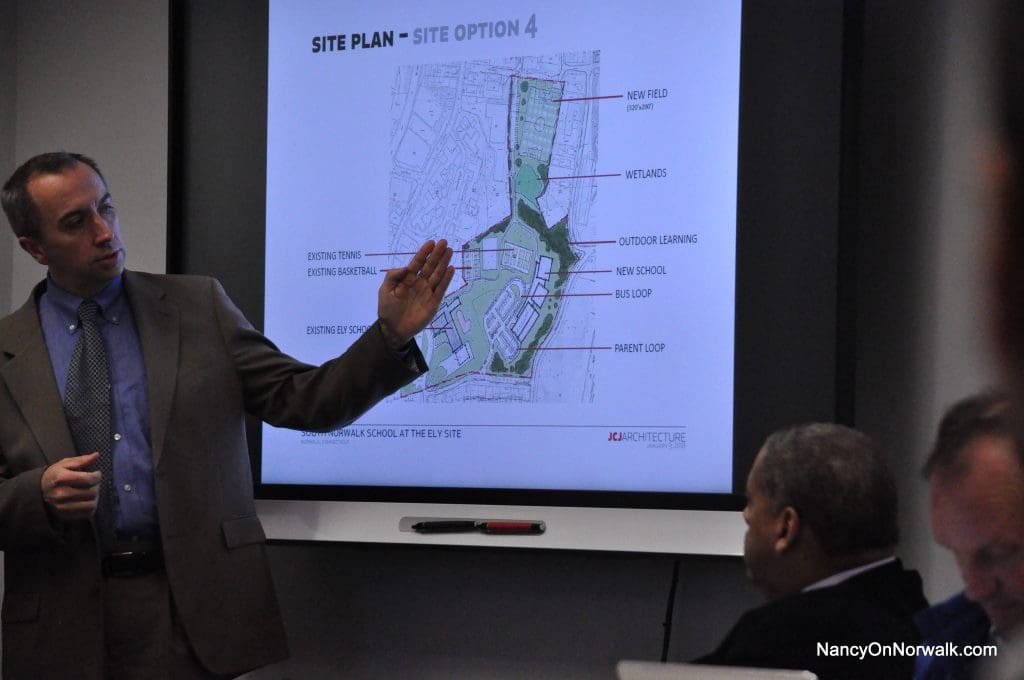 Jim Hoagland of JCJ Architecture explains a “terraced” design for a new school at the Nathaniel Ely site during an early 2018 meeting in City Hall.

NORWALK, Conn. — Norwalk is going to start looking to acquire land in South Norwalk, to satisfy the state and get the school construction planned for the Nathaniel Ely site approved, Alan Lo said Wednesday.

Lo, Norwalk Building and Facilities Manager, predicted that the construction would not start this year.

The plan to build a new K-8 school behind the Nathaniel Ely preschool center, next to Roodner Court, requires the use of Springwood Park land. This is allowed by the state if comparably valued land is dedicated to open space use; Norwalk proposed using a West Norwalk plot for the land swap, 10 acres of land next to Norwalk Community College.

This has long inspired pushback.

Former Common Council member Sharon Stewart asked in May 2018, how the South Norwalk children would get to the new open space land in West Norwalk to play. 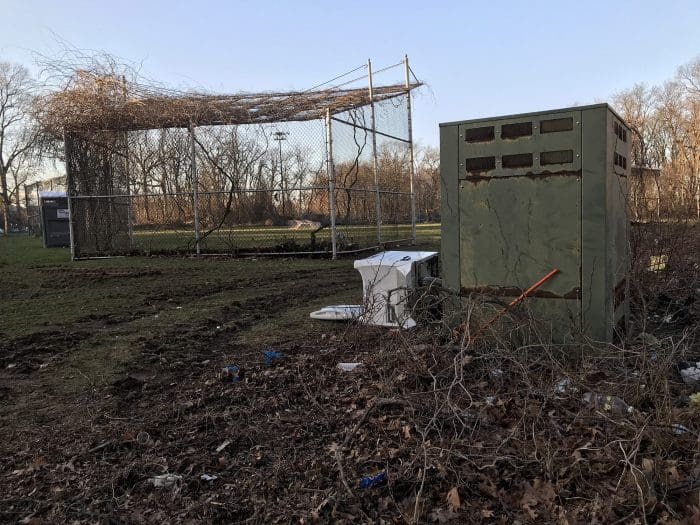 The field behind the Nathaniel Ely preschool center, in April 2018.

The City needs 3.28 acres for its land swap, Lo wrote in 2018. The application was submitted to the Connecticut Department of Energy and Environmental Protection (DEEP) more than a year ago. Lo said in June that the state doesn’t do many land swap applications and the one staff person who handles it had retired and hadn’t been replaced yet.

Beyond DEEP, the National Parks Service has to weigh in.

In December, NPS Chief Financial Officer Thomas Hamilton said the land swap was delaying the school project, and “this is involved in legal issues.”

“There’s a lot of state and federal requirements,” Lo said, mentioning that adjacent property had already been acquired through eminent domain. Those were 4 and 10 Tito Court, adding up to .93 acres for open space.

“It’s complicated,” Lo said. “I mean, the law department has been actively working on it, it’s not like sitting back and just waiting for things to happen. They’ve been constant communication and in the City side, we still consider continue to look at potential other options we have in terms of potential property acquisition.”

On Tuesday, Lo wrote, “{T}he City continues to seek approval from DEEP/Nation Parks Service to exchange city property located on Richards Avenue behind Norwalk Community College.  However, it appears that the inclusion of property located in South Norwalk is essential in satisfying the conversion requirements.   Therefore, the City will need to seek potential conversion property in South Norwalk.”

He will discuss the “need to search for possible land for acquisition” with the Council Land Use and Building Management Committee in February, he said.

So will the school construction start this summer?

“This is a long process,” Lo replied. “We have to get DEEP/NPS approval, thereafter, acquire the property(ies) before we can submit a grant application to the State for approval before June 30.   I don’t anticipate that we will complete the DEEP approval process and acquire the necessary property by June 30, therefore, this project will not be submitted to State this year and construction is definitely NOT happening this year.”

The Council approved the new school construction in 2017. The South Norwalk school, once constructed, would be the new home of Columbus Magnet program, and then the existing Columbus building renovated (or replaced) to create an International Baccalaureate School.

Because the Columbus student body is expected to move into the new Ely school, the existing building cannot be addressed before the new school is built.

Norwalk Superintendent of Schools Steven Adamowski on Tuesday highlighted the need for more school space, given the ever-growing school population.  The shortage of middle school seats is “to great degree caused by the delay” in building the Ely school, he said, observing that the new school would house 150-200 middle school students and the existing middle schools would not be overcrowded.

So Bob Duff, ignoring ever law and procedure on the books, can fast track a new NHS that costs $200 million that no one asked for…..but he is completely powerless to get things moving for Ely, which is desperately needed that might have cost him a few phone calls.

We’ve spent $3.5 million on Ely so far with zero reimbursement from the state.

1400 South Norwalk children do not have a home school.

There are 400 children who live within 500 yards of this school that should have been opened next fall.

I think that’s an old picture. That refrigerator was only there for a few years and someone finally cut the vines holding the backstop together. The tire tracks are endless. The drawings of the soccer field are accurate. That provides more space than the existing ball field that is currently not even being used.

It’s just a sad day when laws can get broken and modified to fulfill someone’s ego trip, while children who need facilities NOW don’t get any consideration and instead have local representation working against them.

The picture of the field is from 2018, as stated in the caption.

Question- when did they decide 400 students from south norwalk would attend this school.
What happened to 20 slots and a proposed lottery for the remaining slots?

I remember, back in the early 1980’s, when South Norwalk kids went to their own schools. Back then, legislators were saying it was discrimination and inequality, because those schools weren’t performing as well East or West Norwalk schools and the student population was predominantly black. The solution to this was to bus the kids to the other schools to create equality. Now, legislators want to build a local South Norwalk school. What will happen to the student populations and test grades across the district? Does this mean schools in East and West Norwalk go back to being better performing schools? I rather enjoyed Marvin El. before the busing laws, because South Norwalk kids were street kids. Just saying.

In that 27 page document…

IV. ENROLLMENT DATA AND PROPOSED PROJECT CAPACITY
The new South Norwalk School at Ely is envisioned with a preference for students attending from the immediately adjacent neighborhood, including families residing in income-restricted housing.

Each school bus costs over $100k a year to operate. Do that math on how much it costs to transport over 400 children all over the city each day. Worse, is the lost time (10 hours a week) on playgrounds and doing fun things after school. It’s very sad how their own leaders are seemingly determined to keep them disadvantaged, using every stupid excuse on the books to keep the project from happening. No one can look at what’s there right now, then look at this soccer field and say with a straight face that this isn’t a nice thing to do.

They don’t have the ones for NHS that Duff wrote up on a napkin just yet.

If a neighborhood is significantly non-diverse, you can’t have a “neighborhood school” because then the school will be non-diverse. That’s very general but the jist of the matter.

Columbus School, before it was a magnet school, was a neighborhood school where the racial profile of the school, like its neighborhood, became heavily minority. The state required a fix to this, and the solution was creating a magnet school.

“Sec. 10-226b. Existence of racial imbalance. (a) Whenever the State Board of Education finds that racial imbalance exists in a public school, it shall notify in writing the board of education having jurisdiction over said school that such finding has been made.

(b) As used in sections 10-226a to 10-226e, inclusive, “racial imbalance” means a condition wherein the proportion of pupils of racial minorities in all of the grades of a public school of the secondary level or below taken together substantially exceeds or falls substantially short of the proportion of such public school pupils in all of the same grades of the school district in which said school is situated taken together.
Sec. 10-226c. Plan to correct imbalance. (a) Any board of education receiving notification of the existence of racial imbalance as specified in section 10-226b shall forthwith prepare a plan to correct such imbalance and file a copy of said plan with the State Board of Education. Said plan may be limited to addressing the imbalance existing at any school and need not result in a district-wide plan or district-wide pupil reassignment. A school district may request an extension of time in cases in which the number of students causing said imbalance is fewer than five students at a school….”

@Margaret. Please stop regurgitating the obstructionists talking points for denying our most needy children a proper education. Clearly, you have not even bothered to read the ed specs which clearly outline how this school meets balancing guidelines. You are contributing to the problem as much as you can’t see it. Trust me, you won’t go out of business with this needed fix.

Forget about who will go to the school for a moment. You need to build the school first, then you can determine who will go. Stop dragging your feet! @Margret come with solutions not excuses.