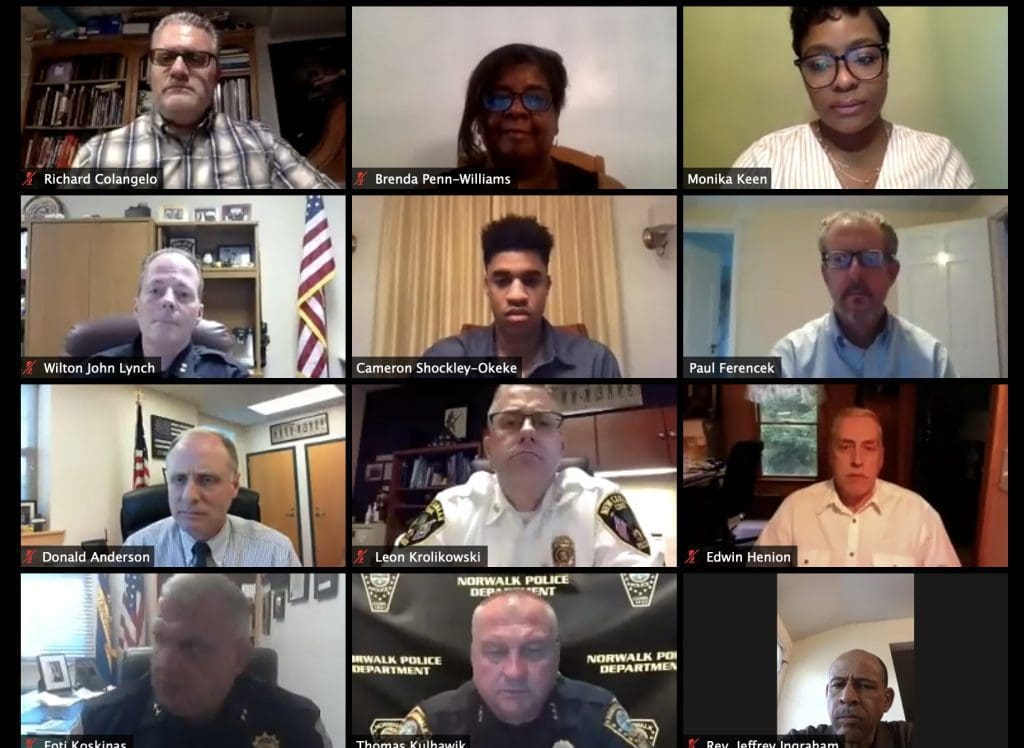 NORWALK, Conn. — From Darien to Wilton, Norwalk to Weston, local police chiefs, along with the chief State’s Attorney and Stamford State’s Attorney, answered questions from the public through a Norwalk NAACP-organized Zoom town hall on Tuesday.

The forum was an “attempt to provide a forum for the community to voice concerns and be a part of the discussion,” Norwalk Branch NAACP President Brenda Penn-Williams said.

“Remaining silent in the face of injustice and maintaining the status quo is not enough,” she said. “We must start somewhere in an attempt to right the wrongs that have been inflicted on people of color for decades.”

Two moderators, Monika Keen, who works at Norwalk Hospital as a security administrator while going for her master’s degree at the University of Bridgeport, and Cameron Shockley-Okeke, a Columbia University sophomore who attends Calvary Baptist Church in Norwalk, fielded questions from the audience about police training, policies, steps for action, and funding.

All of the chiefs who participated in the discussion were white men. Recruiting diverse candidates to the police force was a challenge many of them mentioned.

For example, Police Chief John Lynch said in Wilton there is one African American officer in their approximately 42-member force.

In an effort to boost their minority officers, Lynch said they’ve been going to colleges and job fairs to reach out.

“We can only use those that apply and those that meet certain requirements, so it’s been difficult,” he said.

In New Canaan, Police Chief Leon Krolikowski said that nearly 20 percent of the department is “diverse” with African American and Hispanic officers. Counting females and others who aren’t traditionally thought of as “law enforcement,” about 30 percent of their office is “diverse,” he said.

“We have the most African American, Hispanic and female officers in our history,” he said.

Still, many of the chiefs acknowledged that improving diversity on the police force could help better relations with minority communities in their municipalities.

Norwalk Police Chief Thomas Kulhawik said that when he joined the force, almost everyone was a white male. As chief, he said that he and others try to continue to improve diversity in their ranks.

Shockley-Okeke asked the panel for ways to stop “over policing of minority communities.” Kulhawik said that the state task force on policing, which he sits on, is considering whether minor violations, such as a suspension of a registration for a car or other small items, should be enforced by the police or through another outlet, such as the DMV.

“I think the real question there is whether the state wants to change the law,” he said.

It’s also important for police officers to know more about surrounding communities and the people there, because people travel from one town to the other, Westport Police Chief Foti Koskinas said.

“Our neighboring communities make up our day-to-day population,” he said. “I think that’s an area we need to do better.”

One of the main ways departments can be accountable is through their accreditation process, Kulhawik said. The Norwalk Police Department is accredited through the Commission on Accreditation for Law Enforcement Agencies, Inc., which requires the department to be in compliance with more than 450 standards related to policing that are checked by outside assessors.

When officers do break the law and have to be prosecuted for their action, both Chief State’s Attorney Richard Colangelo and Stamford State’s Attorney Paul Ferencek said that prosecutors don’t “take the police’s side.”

“I know there’s a perception out there,” Colangelo said. “As a prosecutor, we don’t really have a side…we’re going to look at the facts as given to us.”

Ferencek said that he and other State’s Attorneys are reviewing warrants submitted by officers and often send them back to officers if they’re not filled out properly.

If there is a conflict of interest, such as a close relationship between a prosecutor and an officer, Colangelo said his office helps to move the cases to other jurisdictions.

There’s also talk among legislators of establishing an inspector general unit to investigate police use of deadly force cases. Colangelo said it “is probably a good idea for the state.”

“I support it in concept, but I have to see what the language of the statute actually is and how it would work,” he said, adding that the legislation would need funding attached to it to staff the office properly.

When an officer is terminated for job-related performance, they have a right to file a grievance with the state’s labor board, which conducts a hearing into what transpired.

“The end result is it will usually go to the State Labor Board,” Krolikowski said. “It’s never easy to terminate an officer—it’s a complex process.”

Almost all the departments on the call said that their officers use body cameras, and all said they supported them as a positive for both the police and the community.

“I’m a big fan of body cams,” Darien Police Chief Donald Anderson said. “We can go right to the video tape and we can see what transpired.”

Anderson said that perception, from both officers and the people they interact with, isn’t always accurate and the video can help clear up questions.

In Wilton, Lynch said that he and other administrators will sit down with officers to review the tapes as a learning exercise to show how their attitudes or behaviors came across to the people they were interacting with.

In Norwalk, Kulhawik said each month they audit the body camera videos which can be compared to the documented calls an officer went on to make sure they match.

“When we activate our in-car cameras, it automatically triggers his body cam as well,” Lynch said about the Wilton system. “If you leave it up to human error, you’re going to have misses.”

Weston, which has a small force of under about 20 members, does not have body cameras.  Chief Edwin Henion said they’re working with the town leadership and applying for grants to try and get funding for cameras.

One of the questions that came up was if the chiefs and attorneys supported the calls to “defund the police.”

“I would strongly disagree with that,” Ferencek said. “If you defund the police, the police are not going to undergo the training they need.”

Kulhawik said that he believes “defund the police” has been “misused.”

“There needs to be money dedicated to social services programs to help the police deal with problems that are not really law enforcement related,” he said, citing addiction and mental health issues as examples. “Money should be spent on those—it’s not all or nothing. I think the police can be funded and I think we can find the money to fund (those social services).”

Penn Williams, at the start of the town hall, said that the local chapter of the NAACP called for the “revision or creation” of civilian advisory review boards.

Koskinas said that on Tuesday Westport had announced the formation of a civilian review panel. The panel “will work closely with the members of the Police, Fire and EMS Departments to assist in the hiring process of new employees and to review and provide feedback in the civilian complaint process,” according to a statement from Westport’s First Selectman Jim Marpe.

“This came in collaboration with the police department—this was not forced on us,” Koskinas said. “We’re really proud of that and we’re really looking forward to working with that panel.”

All of the police chiefs and attorneys voiced their support for keeping school resource officers, as long as the officers were there to build bonds and trust with the students, and not put them into the justice system.

“Their first action isn’t, or shouldn’t be, ‘let’s make an arrest,’” Colangelo said.

Kulhawik said problems can arise when “police are getting involved in minor issues,” but said the program has had a positive impact in Norwalk.

“I think it’s been a tremendous program, it builds relationships with the kids,” he said.

The police chiefs highlighted the fact that Connecticut has “some of the best training in the country.”

Many of the departments said they go for implicit bias, crisis intervention, critical incident training and others regularly. Many programs require retraining within three years for a department to maintain its certification, chiefs said.

Anderson also said that he believes that it takes longer to become an officer in Connecticut than other areas in the country, due to the training and academy programs.

Chiefs said that there are also more resources available now to officers, such as employee assistance programs, to help them deal with issues both job and personal related, to help provide mental health support for them.

All of those in attendance said that listening was the first step and they hoped that community members would continue reaching out with questions and concerns.

“We want to hear what you have to say and we want to make a difference with you,” Lynch said. “We want to build your trust.”

Colangelo said that it’s important to give people a voice and try to answer their questions.

“You should get the answers you want,” he said. “You should bring them your concerns.”

Both moderators said that they would like to see action beyond the conversation.

“The importance of fostering a strong and honest relations between these two communities is crucial for Norwalk (and other cities),” Shockley-Okeke said.

Keen added, “We want policy change—we can meet but what are we meeting for, we’re not marching just to march. We all want systematic and transformative change.”

Looks like an admirable start to improve things. I’ve been wondering if across the US we perfect police diversity, reallocate money from the police, have civilian reviews and just make all of policing perfect, then what?

Will this solve the homocides in Chicago, St Louis and Baltimore?

The police are not the problem, they are only a symptom of the problem. The real problem is the ‘welfare state’ which effectively destroys two-parent homes. The massive increase of fatherless homes, particularly in the black community as noted by President Obama, has been shown to create all types of societal problems.

Now add in the lack of political power and is it any wonder why people are angry at the system.

The harsh reality is that the welfare system and its attendant programs are immensely powerful and highly lucrative for the political class that administers them. Fixing the welfare state should be the focus of the protests, not the police, or statuses or racism.

The problem is most people don’t know about this. Worse, our political leaders don’t want you to know for fear you would vote them out of power for allowing this type of injustice.

There is an excellent documentary on this called “Uncle Tom” by Larry Elder which features a host of black leaders discussing the challenges note above. This should be required viewing by all Americans. This should be on every school curriculum as required viewing by all students as it goes straight to the heart of the problem and provides solutions. To the extent that it is not will tell you a lot about the values of your local school board.

Other excellent free recourses on this include YouTube discussions by Candance Owens, Dr. Thomas Sowell, Shelby Steel, Walter E. Williams to name a few. Sending some time with them will help you understand the root causes and allow for real change to happen via the ballot box.

A color-blind meritocracy for all citizens and freedom of speech should be our goal.

Sadly, we have the cancel culture and a pay to play system at all levels of government which benefit the few. Change will happen when you vote the person, not the party.