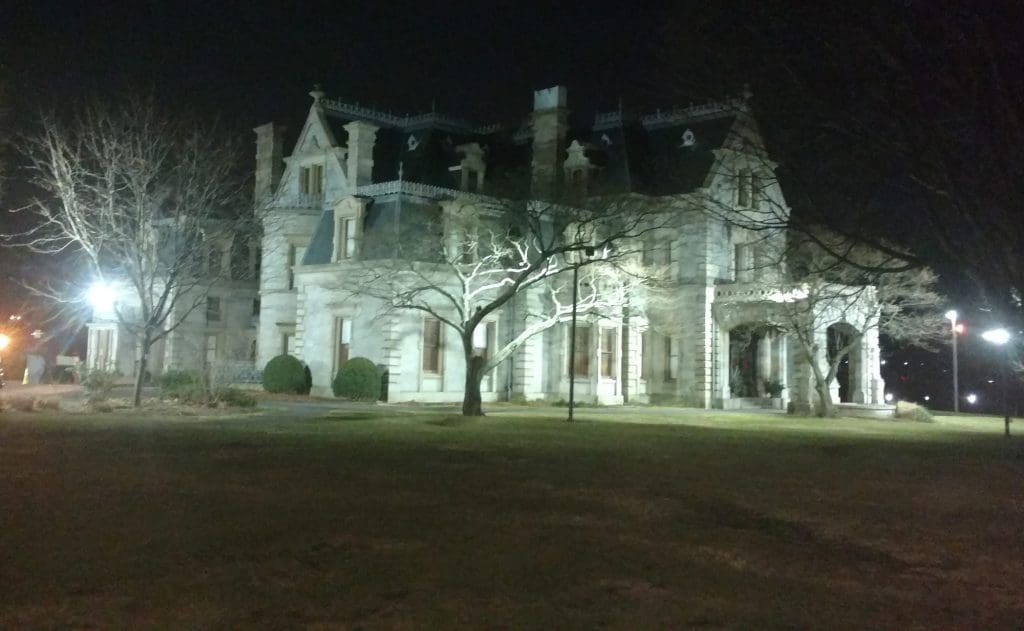 The Lockwood Mathews Museum Mansion, lit up at night in 2017.

NORWALK, Conn. — Movie producers are set to put $275,000 in the City-owned Lockwood Mathews Mansion Musuem’s coffers, in exchange for the filming of a Stephen King movie there.

“Mr. Harrigan’s Phone” will star Donald Sutherland and teen Jaeden Martell in the adaptation of King’s recent novella, according to multiple news reports. Filming is scheduled to take place from Oct. 25 to Nov. 26 on the mansion’s first floor, according to Norwalk Assistant Corporation Counsel Darin Callahan. Should the production company, Blumhouse Productions, need additional time, it will pay an additional $10,000 a day, with a 30-day cap on that clause.

“It’s a wonderful opportunity for the Mansion to get an influx of funds into our operating account. I also believe that it is an exciting thing for the city of Norwalk, and it’s also an economic engine that is going to bring some more attention to us,” LMMM Board of Trustees Chairwoman Patsy Brescia said to Common Council members last week.

The Council is set to authorize the deal Tuesday. And in spite of all the publicity out there, filming plans seem very last minute.

“It has been difficult for us to accomplish this, because it was rush-rush, and we had to change a lot of our programming for the fall,” Brescia said Wednesday in a joint meeting of the Council Land Use and Recreation and Parks Committees.

“Mr. Harrigan’s Phone” is described as being suitably “creepy” in a Reddit post. Martell’s character is hired by the nearby billionaire Sutherland, and the boy reads the old man classic literature and cleans up around the house, according to reports. Eventually, Sutherland’s character passes away and the youth discovers there’s something spooky about the phone he had buried with the old man – it’s a portal for death wishes. He makes a phone call to the corpse and mysteriously, an enemy passes away.

So when you notice that the Lockwood Mathews Mansion isn’t lit up at night in the coming weeks, you’ll know it’s become as dark as needed for King’s latest. (The exterior lights are being removed for filming, Brescia said.)

It’s expected that the film will appear on Netflix next year, news reports say. Brescia said it’s “probably” being sold to Netflix.

“We feel pretty confident that we have a very good deal,” said Attorney Larry Cafero, a LMMM Board of Trustees member.

The joint Council meeting was arranged to get a speedy approval for the project. Conversation revolved around logistics and concern for the mansion. Norwalk Parks Superintendent Ken Hughes spoke of food tents and said, “I’m confident things are going to go well.”

“What sort of fed into this this project nicely is that with our construction project, our seven and a half million-dollar construction project, we have been working with professionals to learn how to really protect the interior, the woodwork especially, and the floors. So we had a head start on being able to respond to this movie request,” Brescia said.

The Council has invested capital budget funds in upgrading the mansion over a series of years, including $2.5 million in 2019-20. That $2.5 million would be added to a $5 million state grant the mansion had already received, to complete mechanical upgrades and add safety systems, Council member Tom Livingston (D-District E) said in 2019.

Brescia said last week that if any mansion belongings that need to be moved or touched, that will be done by Norwalk personnel. Cafero said Blumhouse Productions has already put $25,000 into escrow and will pay an additional $91,000 once Mayor Harry Rilling signs the agreement. The good faith 25K is nonrefundable and the balance will be paid in two more installments. There’s also a $75,000 security deposit to cover any damage.

She said, “We just love the mansion. The mansion is so important to Norwalk, and in the next 10-20 years, it’s even going to be more significant. Many people don’t realize that it is the first and the largest mansion built like this in the country during the Civil War. It’s unique and it’s just outstanding. So saving it and preserving it is very important for all of us in Norwalk.”