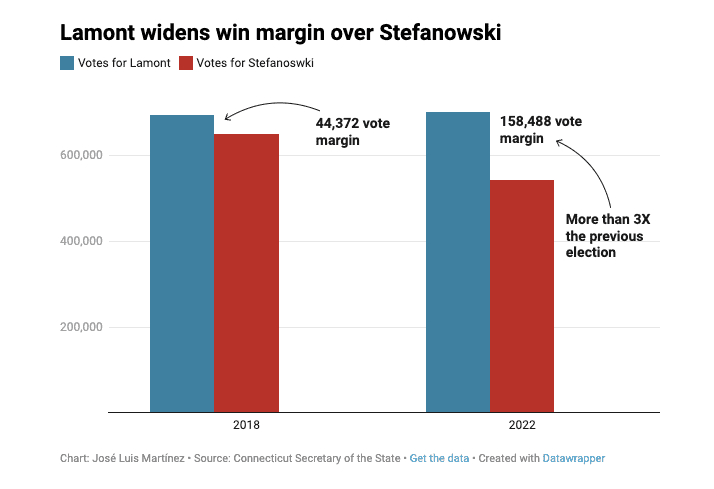 Gov. Ned Lamont secured a second term as governor with a wider win margin than in his 2018 faceoff against Republican Bob Stefanowski, this year beating Stefanowski by more than 158,000 votes, compared to about 44,000 in 2018.

Lamont can thank the suburbs for that.

Lamont carried 45 towns that Stefanowski had won in 2018, and his margins improved — whether he won or lost — in all but 17 municipalities.

The towns that flipped from Stefanowski to Lamont include Greenwich and many others along the shoreline, as well as many Hartford suburbs. 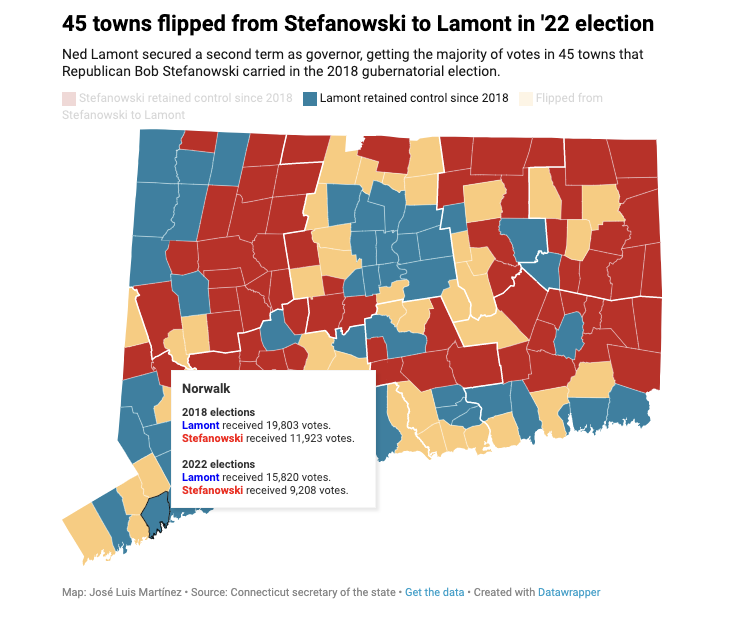 “If we were to look at Lamont in 2018 versus Lamont in 2022, I think people have gotten used to Lamont,” said Scott McLean, a political science professor at Quinnipiac University.

“His emergency powers and his nearly daily press conferences — he showed a lot of transparency, and he was frank. He seemed to be telling everyone the truth, and I think they forgave him when he would make a gaffe or say something wrong in these press conferences. They didn’t hold it against him, and I think that started to win off some of the voters,” said McLean.

Hartford, New Haven and Bridgeport also saw large drops in voter turnout, 30%, 40% and 26% respectively. Norwalk saw 32,280 votes cast for governor in 2018 and 28,051 votes for governor last week, according to the Secretary of State.

“It’s a combination of things. The Democrats became very much more dependent on the self-financing of the campaign, which may have affected their general sense of urgency in the cities. The polls did not show that this was going to be a tight race,” McLean said. “Four years ago, the turnout in the cities was extraordinarily high, so we shouldn’t be too surprised that four years later it’s not as extraordinary, it’s more ordinary.”

Voter turnout for this election was 57.53%, according to early reports from the secretary of the state’s office, with over 1.2 million people casting ballots, down from 65.23% in 2018, when there were more than 1.4 million voters.

“In the end, it may come down to just that Lamont won these voters over that he didn’t win over four years ago. Mainly because of COVID and being a responsible steward and having this big budget surplus and making plans to invest it,” said McLean. “I think voters gained a lot of trust.”

I’m not surprised,a lot of people of color don’t utilize their hard fought for right to vote. ALl what our ancestors endured, and the unjust history of Black people in America. DR Martin Luther King, must be turning over in his grave!!! We talk about equal rights, yet a lot of us (Black Americans) don’t see the importance of voting. I vote for myself and my ancestors!!!