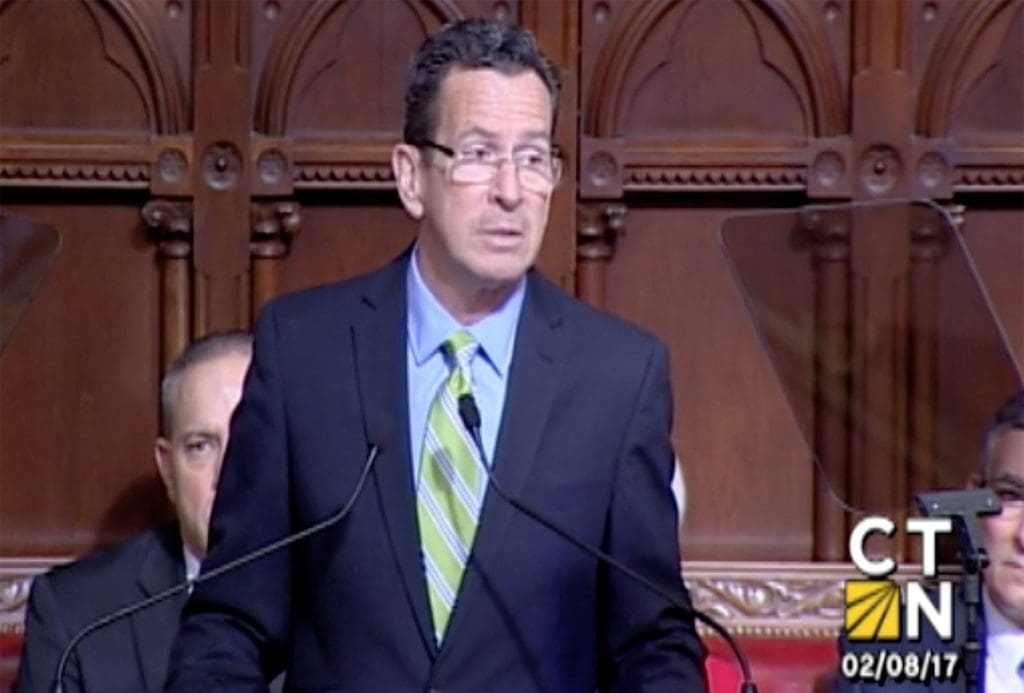 Gov. Dannel Malloy delivers his budget address in February, as shown on CT-N.

NORWALK, Conn. – The pressure is on for Norwalk Public Schools funding, as state legislators struggle to agree on a biennial budget and Gov. Dannel Malloy’s promise of a $4.4 million cut to Norwalk next year remains on the table.

“We worked mightily and agreed with the unions to avoid layoffs on the local budget, but if we get hit with cuts of this magnitude layoffs will be inevitable,” Board of Education Chairman Mike Lyons said Monday on Facebook. “We figure we can wait a few more weeks for a budget, but after that we may have to start taking protective actions (as other towns already are).”

The $4.4 million cut would be for Fiscal Year 2018. Lyons in mid-July said that Malloy’s order, which would be negated if the legislature agrees upon a budget, includes eliminating Norwalk’s Alliance District grant and a reduction in November’s Educational Cost Sharing (ECS) formula payment. The Alliance grant was factored into this year’s budget as $1.1 million, and the ECS payment would be $800,000 less than expected.

“We won’t have specifics until the final numbers come from the state,” Mayor Harry Rilling said in a email. “Any cut in our already inadequate ECS funding would have a significant impact.  Once we have details, we will have to meet with the Superintendent and the Board of Education.  Hopefully, the legislature will craft a budget and our cuts will be minimal.”

While state Democrats promise that the cuts will not be enacted as outlined, Malloy last week indicated that he may shift his cuts, saying that he can no longer protect municipalities.

Lyons on Monday took to Facebook to protest Malloy’s possible cut and express outrage over the deal made last week by state Democrats with state unions.

“Just received the latest executive order from Gov. Malloy – it cuts Norwalk’s ECS funding by $4.4 million,” Lyons wrote to the Facebook group Norwalk Parents for Education, speaking of the executive order signed by Malloy on June 30.

Lyons did not respond to an email asking why he called the June 30 order “the latest executive order” that had been “just received,” although he had commented on it in July.

Earlier, he had forwarded an email from James J. Finley, Jr., president and founder of Finley Government Strategies, to Connecticut Coalition for Justice in Education Funding (CCJEF) members and CCJEF legal team, announcing the possible cut and treating it like new information.

“The governor would enact a $506 million cut in overall ECS funding – a cut of 25%.  In the absence of a state budget the governor is expected to order deeper cuts to many school districts.  I will keep you apprised of further (developments),” Finley wrote.

Malloy on Aug. 2 asked Office of Policy and Management (OPM) Secretary Ben Barnes for information on “municipal aid, local tax levels, expenditure trends, fund balances, and any other criteria that could better inform our decisions.”

“In recent years, I have made it a priority to protect aid to municipalities,” Malloy wrote to Barnes. “In contrast, we have made drastic changes to how we fund other areas of state government – both in total funding and in our rationale for how limited dollars are allocated. …. Throughout all of this, we’ve held town aid harmless. In fact, it could be said that we have sacrificed state services and raised re venues in order to shield town government from facing difficult choices required of state leaders and implementing reforms.”

Changes must be on the table, Malloy said, explaining, “If we fail to recalibrate aid based on shifting local demographics, economies, and need, we risk perpetuating an inequitable distribution of burden among our communities.

CT News Junkie on Aug. 3 quoted House Speaker Joe Aresimowicz, D-Berlin, as saying that any final budget proposal is likely to look different than Malloy’s when it comes to municipal funding and asserting that there’s bipartisan consensus to mitigate the cuts originally proposed by Malloy.

“(W)hen a budget is finalized I believe we will not see these cuts at the level of the governor’s plan,” Aresimowicz is quoted as saying.

News Junkie on Monday reported that Democrats are predicting a “70/30 budget,” with 30 percent of the budget being items that legislators don’t like, but said that Malloy had indicated that he would not sign a budget without municipal aid cuts.

Lyons in the Monday Facebook thread said, “The die was cast when the legislature made the deal with the state unions. By guaranteeing them no layoffs for 4 years and no benefit changes for 10 years (something absolutely unheard of in the private sector or even in local union contracts), they left the state with nowhere to go for many years except big tax increases (again) and municipal aid cutbacks.”

The union deal is said to save taxpayers more than $1.57 billion over the next two years. The remaining budget deficit is $3.5 billion.

Lavielle on Facebook said, “The governor has said that while he is making decisions, he is going to help just a small number of towns by pulling money away from the others. This is one of the many reasons why the majority party’s inability or unwillingness to release a single budget proposal this year is unconscionable.”

State Senate Majority Leader Bob Duff (D-25) did not respond to numerous attempts by Facebook posters to get him to respond to the thread.

“This agreement is the latest step toward making government more affordable and more efficient for taxpayers. Outside independent analysts confirm that the new SEBAC agreement makes important long-term changes to our state employee pension and benefit programs resulting in significant savings for taxpayers—roughly $24 billion over the next 20 years.

“These savings are another important step toward reaching a final balanced budget that protects taxpayers, vital services and the important economic gains made here in Connecticut.”

A parent on the Facebook thread asked what could be done.

Barbara Meyer Mitchell, founder of the parents’ Facebook group and a Democratic candidate for the Board of Education, urged readers to write to Malloy, Duff and Aresimowicz.

“Demand a mini budget to maintain services until a biannual budget can be negotiated. Demand equitable ECS funding,” she wrote.

“(W)e’ve made every call we could, testified, written letters, visited Hartford. All we can do now is wait and watch,” Lyons wrote.

Another parent asked Lyons about the state’s minimum budget requirement for education, which requires municipalities to maintain school funding at the same level it was at in the previous school year.

“There is a minimum funding obligation regarding LOCAL funds … but if the State cuts our funding, we’re not legally obligated to replace THAT,” Lyons replied. “Bottom line to all of this — we need the State to get a budget done, and get it done fast. At this point I’ve given up on getting any significant additional ECS funding, probably for years. I’m just hoping we can get level funding rather than a cut.”

Where’s Bob Duff and why doesn’t he help his constituents?
Not too long ago, didn’t he say that Norwalk would get more school funding?
Come on Bob deliver for us!

You can’t make this stuff up. The contrast with what Bob Duff is smoking, thinking and communicating vs. the bold realities is absolutely unreal. Forget lipstick on a pig, the sweat on Bob’s brow is from his efforts to frantically polish a budget tird – not going to well is it? Please put the tird and polish down and stand up for us Bob! Thanks, Kevin

Sadly the flawed SEBAC labor agreement puts future town aid right in the bulls-eye for future budget cuts. This deal locks in all state employee benefits for the next TEN years. It locks in wages and prevents layoffs for the next four years. Collectively these expenses represent 40% of the entire State budget.

The labor concessions got us only a fraction of what we needed. In high school I ran the mile on our track team. A mile was 4 laps around the track. This SEBAC deal gets us the equivalent of only 1.5 laps.

Mathematically, future Town Aid is the only remaining big ticket item left in the State budget. For that you can thank every State democrat legislator who voted for SEBAC.

I can’t imagine that people didn’t see this coming. Norwalk is not the only city to suffer.

At 74 years of age & having followed current events since Pres. Kennedy was assassinated, I know some history. If all you guys are so against spending, why don’t you question our spending on the military? What do you think of the present “modernization” of our nuclear weapons triad? Connecticut’s Electric Boat turned down our Native Americans’ request for ferry boats; “We build submarines!” replied the very highly paid CEO. As a Quaker, one who follows the teachings of Jesus, I do look for that of God, the Great Spirit of Life & of All Matter & of All Anti-matter, in each person. Name-calling is hurtful & childish. “Now is the Time” said Thomas Paine; now is the time for us humans to get together & solve our problems of climate change, immigration/refugees, etc. Pres George W. Bush & VP Dick Cheney began a war & cut taxes at the same time!! We are still behind- When Pres Clinton agreed to welfare reform, our US Congress promised money for child care & mass transportation that it did not follow through on. Have I said this before, yes, but who pays attention-
I, for the Wilton (area) Friends/Quaker Meeting, have given each member of our Norwalk Board of Education (except one who was absent) and later, each member of our Common Council & the Mayor a copy of the US Conference of Mayors’ Resolution on Nuclear Weapons. Check out the latest one; see mayorsforpeace.org; fcnl.org/nuclear.
Our Board of Education, Common Council & Mayor, & our state legislators have to speak up to our Congress & our President/Executive Branch about the steady decrease in Federal funding for education. We did not accept the German & Japanese peoples’ excuse for their Silence pre & during WWII. Silence is acquiescence. We are one human race sharing one beautiful Earth!

Is Duff planning on weekly car washes weekly at the sono collection to raise money for the schools?

Senate Majority Leader Bob Duff de-facto voted to help Norwark receive MILLIONS LESS in education funding when he enthusiastically voted and praised the recent state union deal. Duff could have chosen the 97% of residents who are not state employees, but he didn’t. That should speak loud and clear to all of us.