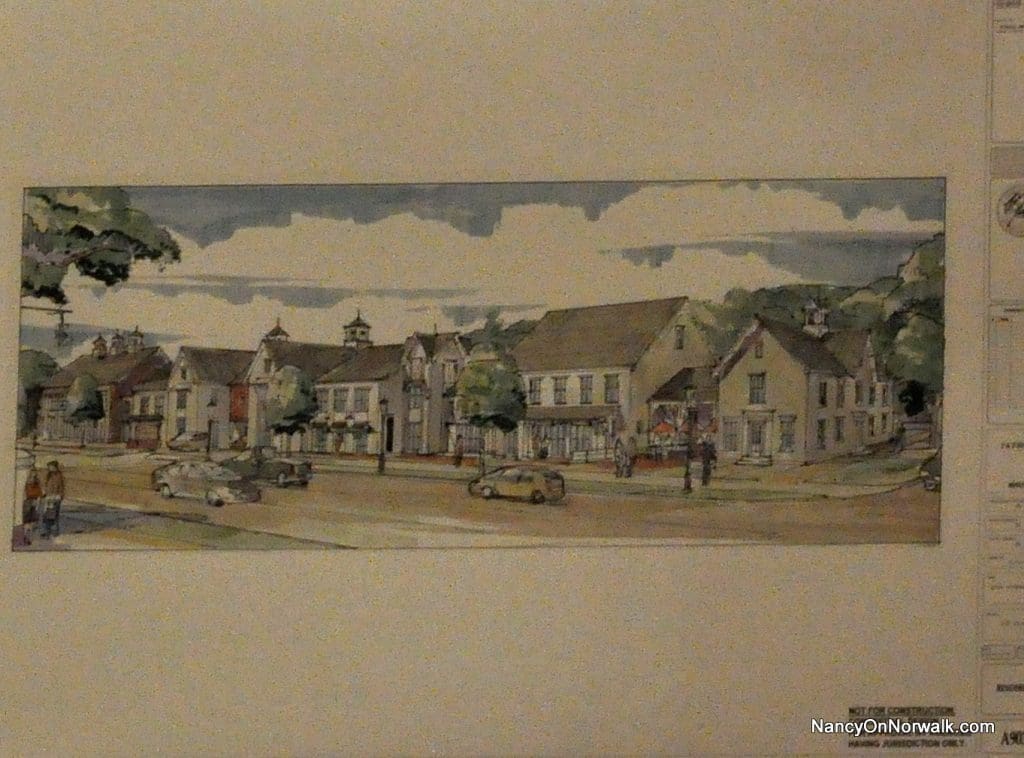 A rendering of The Village, shown to the Norwalk Zoning Commission in 2017.

NORWALK, Conn. — “BJ’s” is moving forward, over the objections of nine Norwalkers who responded to a last-ditch appeal for protest.

The Planning and Zoning Commission agreed Thursday to grant The Village, a proposed 100,000 square foot retail development at 272-280 Main Ave., its fourth one-year extension. It’s not officially a proposed BJ’s Wholesale Club site but many people suspect it is because that’s what it was originally pitched as. Developer Main Norwalk LLC hasn’t listed a tenant for the development’s big box space.

No Commissioners voted against the extension, though P&Z Chairman Lou Schulman expressed reservations. Seeing a consensus, Schulman voted with the group.

Activist Diane Lauricella discovered the request for a one-year extension the evening before the vote and urged the “good folks who worked together since 2012 to try and stop the BJ’s Big Box” to email P&Z and request that it be denied. Nine people did so before the 3 p.m. deadline, according to Planning and Zoning Director Steven Kleppin; three identified themselves as immediate neighbors.

“When Mayor Rilling campaigned in 2013, he vowed that Big Boxes would be a thing of the past in Norwalk if he were elected. We helped elect him based on that pledge and we ask the Commission to consider Mayor Rilling’s vision, which reflects the values of the communities who will be adversely affected if the current extension request for a Big Box development at 272-280 Main is approved,” Laura Lamorte, Rolling Ridge Condominium Association Board Secretary wrote.

“This is not fair, as it is not the first time they have asked and been granted an extension,” wrote Deborah Idone, an Aiken Street resident.

The project was approved in 2017. “Within the zoning regulations and statutorily, there are time limits on approvals, but also the ability to requires extensions,” Kleppin explained, providing information to show that special permit approvals are null and void after one year unless an extension is granted.

Attorney Liz Suchy, representing the site’s owners, first defended the delay by explaining that construction was held up by an appeal filed by the neighbors. The appeal was denied and the neighbors also lost a further attempt to stop the development, ending the court process.

In 2019, Suchy told the Zoning Commission that the project was likely to start soon. On Thursday, she said, “I was unable to secure the zoning and building permits for a variety of reasons,” forcing developers to seek a third extension in 2020.

“Much like the past extension last year, the delays in securing the zoning and building permits are largely due to COVID again, and those lingering impacts are very, very substantial,” she said.

Costs have escalated due to supply chain issues and the estimate to build the project has risen from its original $23 million to $35 million now, she said. Two by fours have gone from $4 to $12 and large sheets of wood sheathing have gone from $48 to $96. And there are some products that just aren’t available.

“In the interim, my client has paid its taxes. It’s been a good neighbor, it’s secured the site, it’s mowed the lawn, it’s also allowed its neighbor, Miss Laura Raymond Homes, to gain access … to do some landscaping, removal of trees,” she said.

Opponents had cited traffic concerns. Lamorte pointed out, “Since the permit was first approved, there are two new condo developments on Aiken Street and a monstrously large athletic field at West Rocks Middle School, all of which have attracted additional traffic to a road that is commonly used as a cut-through to Main Avenue.”

Suchy said the State’s Office of the State Traffic Administration (OSTA) “approved the project, there would be substantial off-site improvements in excess of a million dollars. And that would all improve the roadway system in front of the site, and to the north of it.”

In response, Schulman said he voted for The Village but it was controversial, and suggested that the merger of two Commissions into one Planning and Zoning Commission might merit a review of the project, given that most Commissioners didn’t know the specifics.

Suchy said she’d never seen that done before. Schulman said he remembered the Commission denying an extension for Highpointe, a development planned for North Avenue and approved in early 2018.

Schulman said he could understand the cost challenges but “We had lots of other developers who have moved forward with their projects almost immediately after they’ve received their approvals, despite these issues.”

Commissioner Nick Kantor spoke against relitigating the 2017 approval, which he recalled being unanimous although the vote was 5-2. His “view would be to grant the one-year extension given pandemic that we just came through and the fact that this site has been there for so long.”

The property has been vacant for years. Formerly the home of ELINCO (Electric Indicator Co.), it’s a Superfund site and was put on the national priority list in 1984.

It was declared ready for reuse in September 2020.

Kantor observed that the project might already be built, if not for the lawsuit.

Commissioner Richard Roina said he’d been at the hearings in 2017 and felt bad for architect Bruce Beinfield, because although some, like Lauricella, said he’d put “lipstick on a pig” by hiding the big box store behind smaller storefronts, he thought the design was “fantastic.”

It had been adjudicated, he said.

Seeing the writing on the wall, Schulman assented and suggested Suchy come back later to detail the development’s characteristics to new Commission members.

Four extensions might seem like a lot but it’s not a record, as the plan for a South Main Street hotel was given seven, according to Suchy.

Principal Planner Bryan Baker said a maximum 10 years can be granted by extension.