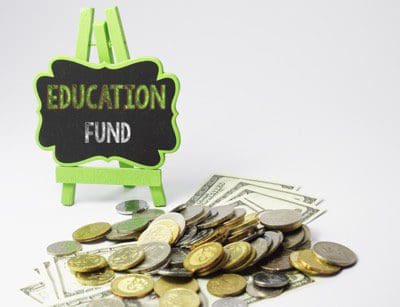 Norwalk’s piece of the state education funding would be fully restored under the governor’s latest budget scheme. (Adobe Stock photo)

NORWALK, Conn. – If it’s Wednesday, that must mean Norwalk won’t see any cuts to its Education Cost sharing funding in the 2017 budget.

That’s different from Sunday, when sources said Norwalk was taking a nearly $58,000 hit to its ECS share.

Stand by – this latest good news could go south at any moment.

As part of Gov. Dannel P. Malloy’s latest revision to the legislature’s revision of his first budget proposal, the controversial, convoluted ECS formula has been turned on its head and kicked to the curb.

In a bid to cut $64,887,652 from the original budget passed in June 2015, Malloy has killed ECS funds to the state’s 28 most affluent districts, and trimmed allocations to others. The 30 lowest-performing municipalities – hello, Norwalk, Stamford and Danbury – will get their original share. That means Norwalk can plan – for a few days, at least – on getting $11,551,095, according to figures released Tuesday afternoon by Malloy’s office.

While that should make Norwalkers happy (or happier) about the situation, State Rep. Gail Lavielle (R-143) let her feelings be known in a Tuesday afternoon tweet: 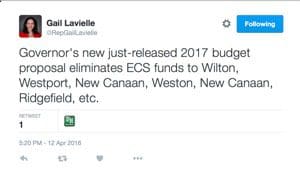 According to Norwalk Common Council President and Finance Committee Chairman Bruce Kimmel (D-At Large), an ECS reduction in the range of the previously planned $58,000 would not cause the city too much pain and would not have an impact on the city’s school funding.

However, while the news for Norwalk is good on the ECS front, it might not be so pleasant overall. The latest budget scheme includes the state reneging on plans to share sales tax revenue with municipalities as part of the controversial Senate Bill 1 that was debated and passed last fall.

For more on the budget story, see the following:

Malloy shows legislature that he can balance a budget

Gee, you mean we aren’t getting the millions of dollars Bob Duff absolutely assured us we were getting? What a surprise!! Seems like I have been right all along.

It is rare that I would be commenting in support of @David McCarthy, but his position here appears factually correct. It was only 3 weeks ago (March 24th) that 5 democrats (partisan press conference) stood before the camera’s and said Norwalk was “IN LINE” to receive “over $6 million in shared sales tax receipts” – along with an over $800,000 increase in ECS funds. Veritable Robin Hood’s.

Both @Karen Doyle-Lyons & @David McCarthy noted “fat-chance”, and scolded Duff for failure to understand the dire financial state CT was (is) in and basic economics. @Chris Bazan said much the same. Looking back now I see Republican’s across this blue state saying don’t believe it – it’s an election year bait & switch.

On another note, I should have known something was up when Bruce Morris deflected the credit to Duff – rather than taking some for himself. Now he’s got less stink on him, slippery clever dude. If Burt Reynolds was born an otter….

So in the spirit of accountability, I only have two questions for Bob Duff. First – what has changed so fundamentally in the last three weeks that you could be so wrong? Second – when will you bring the same fabulous five democrats in front of the camera’s again to explain those rapid changes, and why you gave this town such a rotten full-of-baloney promise? More like Robin Hoodlums.

Just to be clear in case it wasn’t apparent enough in the story, this is Malloy’s proposed budget. The Democrats in the legislature are opposed to it, especially the SB-1 changes. The Republicans are also opposed to parts of the new budget proposal. The only thing for certain here is things are, to use a technical term, a mess, and the immediate solution will not be pretty, whatever it is.

@ Mark Chapman, thank you and yes I get this news is “a proposal”, and I agree with your assessment – the only certainty is the political circus & tap dance (“mess”) that is the CT state budget process will continue. My point remains the same: what was so different on March 24th that compelled that press conference? The tooth fairy for taxpayers?

One interesting thing in the recommenced ECS funding is that while Norwalk is unchanged and many suburbs are cut to zero, two other cities in Fairfield County got increases — Stamford up by $224,000, Danbury up by $998,330. Danbury, with about the same number of students and the same socioeconomics as Norwalk, is slated to get $31.7 million in ECS funding, while Norwalk will get $11.5 million. Anybody out there ‘standing up for us’?

Well, yeah. And that is a whole ‘nother conversation that, if there’s any justice, will get corrected after the suit.