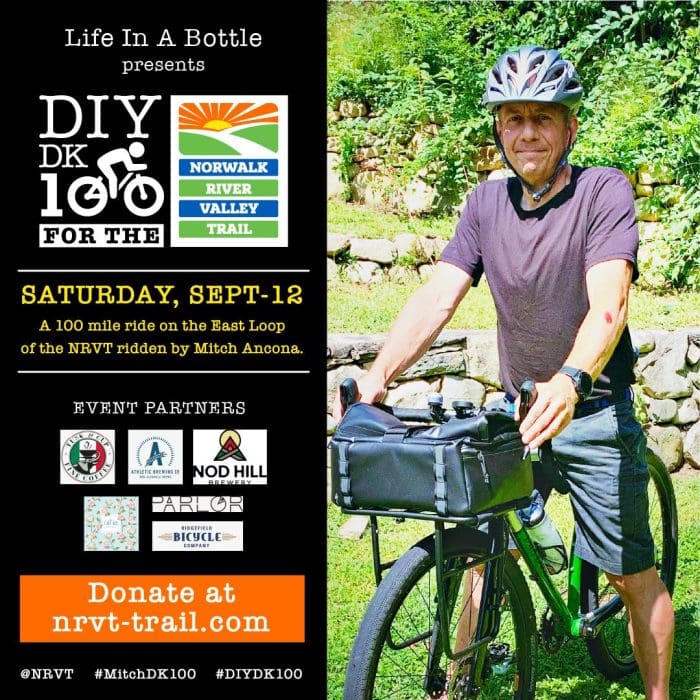 A 100-mile bike ride is just a piece of cake to retail proprietor Mitch Ancona, who will tackle that feat to benefit the Norwalk River Valley Trail (NRVT), according to a press release.   Starting at the Wilton Twin Oaks parking lot at 8 a.m. on Saturday Sept. 12, Ancona will clock 100 miles riding a single-speed bike back and forth on the Wilton NRVT’s two-mile East Loop.

A longtime NRVT supporter, the cyclist owns Ancona Wines of Wilton and Ridgefield. “I ride not for a living, but to live” he says.

The public is encouraged to come to the NRVT East Loop and cheer Ancona on his way, or ride some of the trail with him at a safe social distance.   Donations supporting the marathon ride are welcome at http://nrvt-trail.com/ .  All proceeds go toward building the trail.  Ultimately, the NRVT will run for 30 miles from Calf Pasture Beach through Wilton, Ridgefield and Redding, to Danbury’s Rogers Park.  Eight miles are complete so far.

Recollections of a Japanese picture bride’s life will be offered by her granddaughter, Norwalk resident Joy DeJaeger, 7 p.m.- 8:30 p.m., Weds. September 16 via Zoom in the “Let’s Talk at SoNo”  Branch Library Series.

In early 20th century America, a number of Asian immigrants selected brides from their homelands via matchmakers who proferred photographs and family information.  DeJaeger’s grandmother sailed to the U.S. at age 19 as party to such an arrangement,.

“This is the heartfelt story of a woman who didn’t let sexism interfere with her strength, or hinder her from self-made success,” said Norwalk Public Library Assistant Director Sherelle Harris, adding that DeJaeger is “a great storyteller.”

The Fire Next Time revisited

The Fire Next Time by James Baldwin will be the subject of a Zoom discussion hosted by the  Library, 7 p.m.-8:30 p.m., Sun. September 30.  Baldwin’s 1963 book has endured as a reference point in discussions of race relations in America.

“Due to the turbulent times of 2020, it will be great for Norwalk to be in the forefront of an honest dialogue about both the forward and limited ways we think about race,” said Assistant Director Harris.

Wonderful and life-affirming events during a troubled time! Thank you!