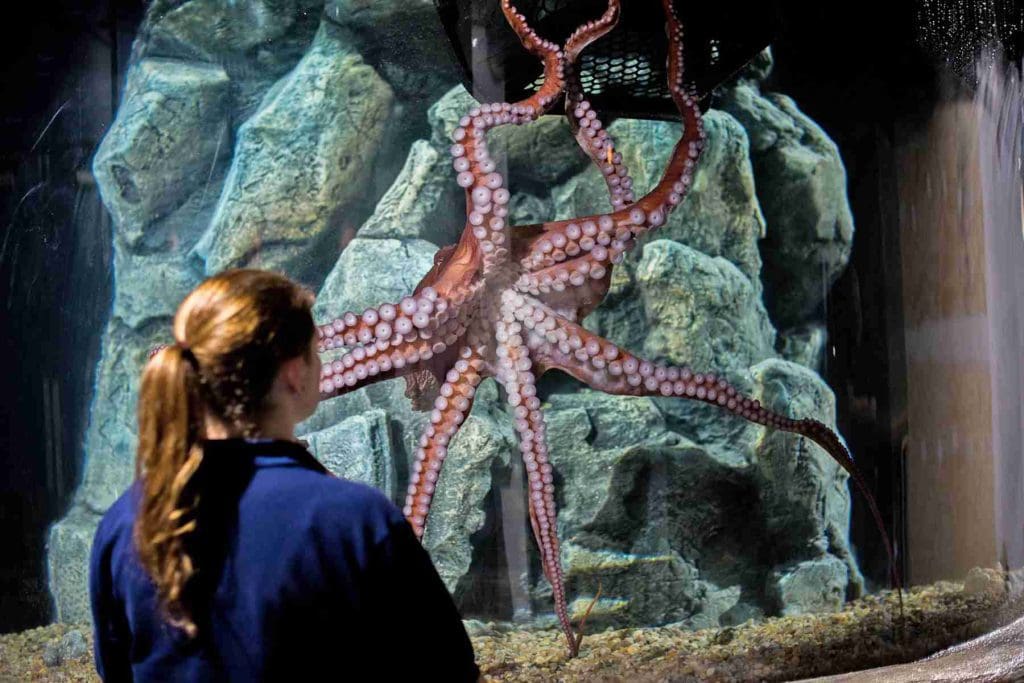 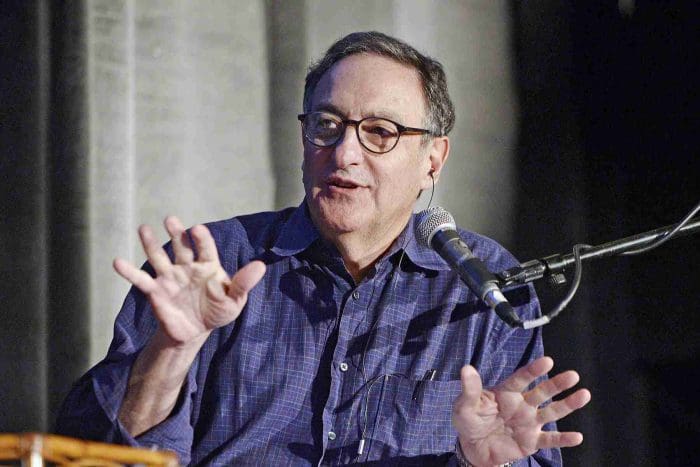 Octopuses and related species will be the topic of Cephalopod Movie Night, emceed by nationally syndicated NPR “Science Friday” host Ira Flatow in the Maritime Aquarium’s 4D theater on Tuesday June 14 from 7 until 8:30 p.m. according to a news release.  Flatow will hold a pre-show meet and greet from 6 until 6:45, and the Aquarium-which has three different displays with octopuses-will be open for touring.  Complimentary food and beverages will be on hand.

Cephalopod Movie Night will include a new 12-minute film Octopus: Blue Planet II 4D Experience, along with short “Science Friday” documentaries and an audience Q&A.  Onstage with Flatow will be American Museum of Natural History postdoctoral researcher Christopher Whalen, who recently identified a new, 10-armed cephalopod in the fossil record, and Maritime Aquarium Animal Husbandry Director Barrett Christie, co-writer of the Association of Zoos and Aquariums’ manual for the care of giant Pacific octopuses. 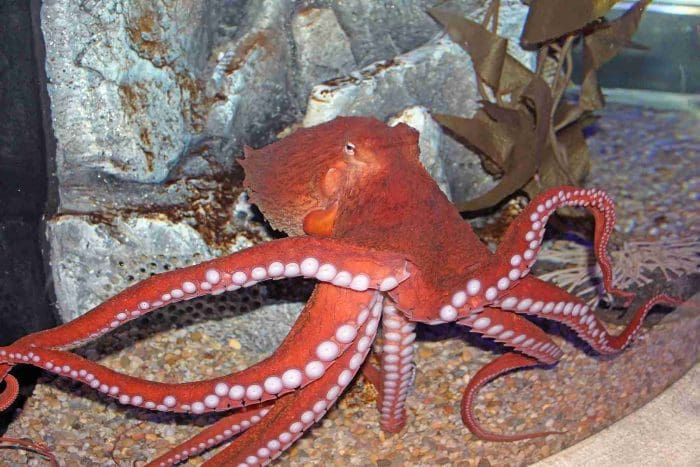 “Science Friday” is staging eight “Cephalopod Week” events nationwide, including Baltimore’s National Aquarium and Pittsburgh’s Carnegie Museum of Natural History in Pittsburgh, but only Norwalk will have a live appearance by air personality Flatow.

Tickets must be bought in advance at www.maritimeaquarium.org.  Price is $30, ($25 for Maritime Aquarium members and Connecticut Public members and $20 for children ages 3-12).  The pre-show meet and greet is included in the ticket price.  All attendees age 5 and older must show proof of vaccination (two doses + booster, received at least two weeks prior to event) at the door for admission.

Working to clean up the Sound

Three thousand of the estimated 1 million abandoned lobster pots which continue to trap marine life in Long Island Sound are expected to be removed within two years thanks to a team led by The Maritime Aquarium at Norwalk.   A $569,000 federal allocation will pay for the initiative, which will include the hiring of a field assistant and creation of an internship program enabling marine industry entry for minority and underrepresented populations, according to a news release.

Fish, crabs, and lobsters have continued to be entrapped and die within the discarded pots ever since 1999’s massive die-off that destroyed the lobster harvest and the industry it had supported. The abandoned pots also endanger boaters.

In 60 planned outings stretching from Greenwich to New London, the Aquarium’s team will retrieve the pots and notify the owners.  Pots not claimed within 30 days of owner notification will be recycled, as will pots lacking ID tags.   Active pots bearing current year or prior year tags will be put back where they were found.

A recent effort to remove 9% of the “ghost” lobster pots from Chesapeake Bay resulted in an increase in fisheries by thousands of metric tons, according to Maritime Aquarium Researcher in Residence David Hudson.  Hudson said, “Removing derelict lobster pots will have a positive impact on the populations of such species as tautog, rock crabs, whelk, cunner and sea bass, which are all important to Connecticut fisheries, not to mention the benefit to the few lobsters remaining in the Sound. By removing these ghost pots, the ecosystem will be healthier since there will be more forage fish and the system can come more into balance for important recreational fisheries.” 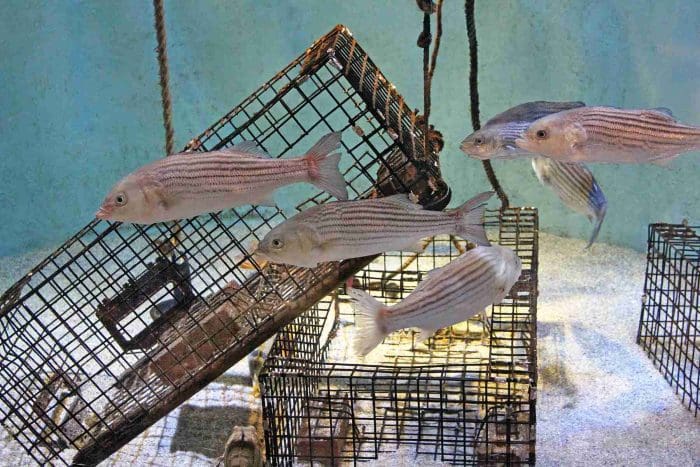 Aquarium team member Cornell Cooperative Extension of Suffolk County has removed 19,000 derelict pots from the New York waters of the Sound since 2011.  Their executive director, Vanessa Lockel, said, “For over 10 years, we have been working on this specific issue of marine debris.  These projects would not be successful without the partnerships we have forged along the way. These partnerships continue to be the backbone of the project’s success, starting with the engagement of the commercial fishing industry and state regulatory agencies, and then including local municipalities, metal recyclers, and waste to energy companies. Combining our resources with partners in Connecticut, we can share the lessons we have learned and develop new cross-Sound projects and collaborations.”

J. Andrew Ely, Executive Director of team member Project Oceanology, said, “Since 1972, Project Oceanology has been delivering hands-on experiential learning in the maritime environment. … There is a strong educational component to this project. We will integrate derelict lobster pot removal and research efforts into both on-the-water and shore-based educational opportunities for students and teachers from our facility in Groton.”

“In addition to Connecticut’s Congressional delegation, I’d also like to credit State Sen. Craig Miner, who raised the bill back in 2018 that made this all possible,” said Long Island Soundkeeper Bill Lucey, a team member and former commercial harvester.

“With the collapse of the lobster fishery and the decline of other commercial fisheries in the Sound in recent decades, commercial fishers have struggled,” Maritime Aquarium CEO Jason Patlis said. “This project will provide an opportunity to employ and engage fishers, and benefit from their skills and knowledge.

“We thank Senators Chris Murphy and Richard Blumenthal, as well as Chair Rosa DeLauro and the entire Connecticut delegation, for supporting this important initiative, and for their strong and consistent leadership on behalf of a healthy and sustainable Long Island Sound,” he continued. “Derelict lobster pots in the Sound continue to take a toll on marine life and negatively impact fisheries for recreational and commercial purposes.  We’re excited to get to work with our partners in a project that will have direct ecological and economic benefits, and that will create a broader framework representing public-private, industry-conservation collaboration.”

U.S. Rep. Rosa DeLauro said, “As Chair of the House Appropriations Committee, I am proud to have developed Community Project Funding so that we can respond to the needs of communities across Connecticut.  I am particularly pleased to have included this project in the final federal spending package … We must continue to support maritime investments that restore coastal habitats.”

“The Connecticut Department of Energy and Environmental Protection is extremely grateful for the work of our Congressional Delegation in securing funding for this important effort to improve the health of Long Island Sound,” DEEP Commissioner Katie Dyke said. “We are particularly excited about the collaborative and inclusive nature of this project, which engages state agencies, academia, non-governmental organizations, and members of the commercial fishing industry as partners in the shared work of protecting the living resources of the Sound.”

“Our delegation knows that the Sound is vital to the quality of life, economy, and healthy future of Connecticut families,” U.S. Rep. Jim Himes (D-Greenwich) said, “I’m also very grateful for the leadership shown by The Maritime Aquarium in bringing together such a strong coalition to remove these derelict pots.” 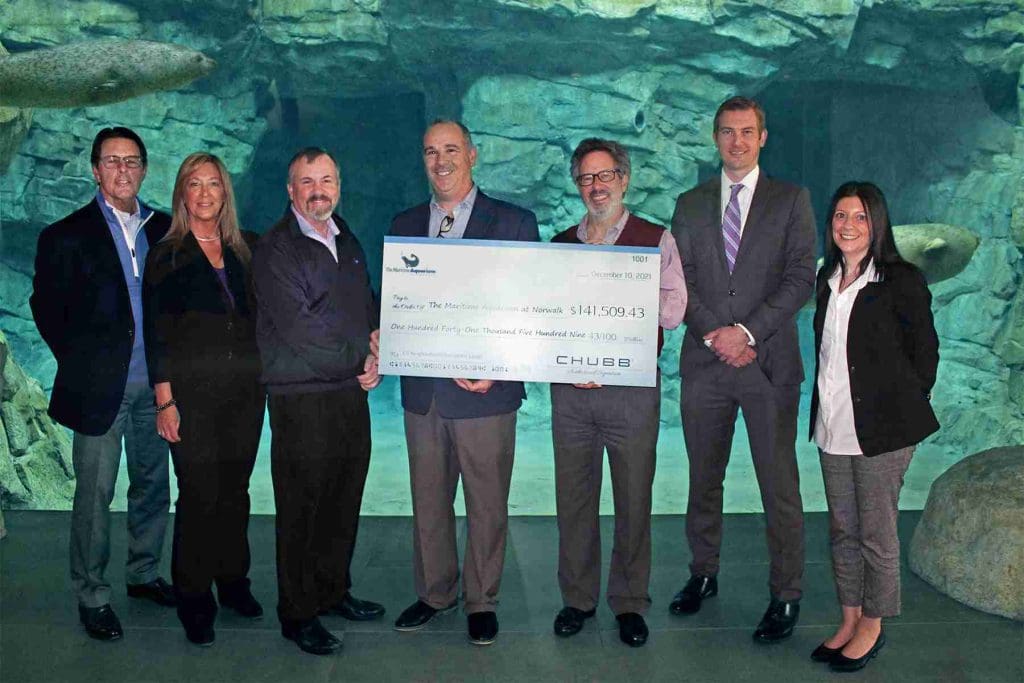 Energy efficiency upgrades to the Maritime Aquarium at Norwalk’s HVAC system will be funded by a $141,509.43 gift from insurance provider Chubb, according to a news release. Chubb had received a credit in that amount through the Connecticut Neighborhood Assistance Act (NAA) Tax Credit Program.

“We thank Chubb and their local representatives at Assured Partners for selecting The Maritime Aquarium as a recipient of the NAA grant,” Aquarium CEO Jason Patlis said. “These funds enable important cost-reducing investments that also allow the aquarium to model environmental leadership through the use of efficient and green technologies for our operations.”

Chubb Senior Vice President/New Haven Branch Manager Jon Pensa said, “We are proud of our long-standing relationship with The Maritime Aquarium, and our support for their green technologies and conservation efforts make sense on many levels.  Good corporate citizenship lies at Chubb’s core – from how we practice our craft, to how we work to make a difference in the communities we serve.”

Tea-maker R.C. Bigelow and medical insurer ConnectiCare are also supporting the Aquarium upgrades via the NAA program this year.

Routine children’s immunizations have declined since the pandemic set in, according to a news release from Norwalk Health Department.  It’s now National Infant Immunization Week (April 24 through 30), and the Health Department urges parents to make sure their kids’ vaccines are current by checking in with their children’s healthcare provider.

Free vaccinations for eligible uninsured kids aged 18 or younger are available from the Health Department.  Also, free whooping cough vaccinations are available for people ages 11 through 64 who are family members of an infant younger than 12 months old.

“Vaccination plays a critical role in protecting our children and, in turn, the public’s health for 14 vaccine-preventable diseases,” said the Health Department’s Immunization Action Plan Coordinator Pam Bates.  “Outbreaks of dangerous diseases like measles can occur when children in the community miss their routine vaccinations. It is essential for children to stay on track with well-child visits and the recommended vaccine schedule.”