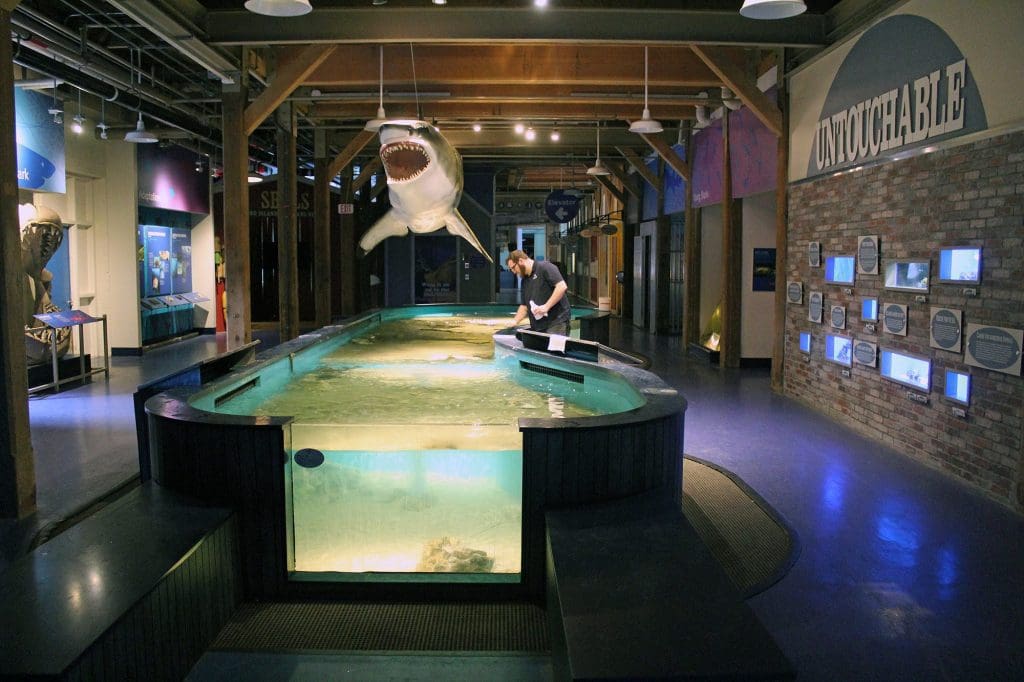 NORWALK, Conn. — Maritime Aquarium leadership, having furloughed a significant number of employees in response to the COVID-19 crisis, is scrambling to keep the SoNo institution afloat after its doors were shut to visitors and the admission fees they pay.

To pay the bills, the Aquarium has applied for a $75,000 no-interest loan from the State and a $2 million loan from the federal government under the recently passed CARES Act, Maritime Aquarium President and CEO Jason Patlis told the Board of Trustees last week.  It will also seek a loan under the Paycheck Protection Program, which could become a grant, he said.

“Your thinking is incredibly creative and with such a hard-working team, we’re really optimistic about the future. And I really never been more proud of the work that’s going on with the aquarium,” Audrey Weil, Board of Trustees Chairwoman, replied.

The Aquarium closed March 13 in response to an executive order by Gov. Ned Lamont. It’s hoped that it can begin a “very gradual” reopening in May, with an emphasis on maintaining physical distance for a safe atmosphere inside, Patlis said Friday. This would involve spacing guests out in the IMAX Theater and only allowing a certain number of visitors inside the aquarium. There would be special membership opportunities, too.

About 80-85 percent of the Aquarium’s budget is funded “from earned revenues, which includes admissions, sales, fees, etc connected to visitors and guests coming to visit, renting our facilities, contracting our educational staff and programs,” Maritime Aquarium Director of Marketing Tina Tison said. “The balance is a mix of philanthropic dollars, including gifts, donations, grants, etc.”

The staff reductions and the need for cash is a problem facing zoos and aquariums nationwide, Patlis said.

“We have live animals that need constant care, and the care that we provide has to meet excellent standards for our accreditation with the Association of Zoos and Aquariums,” he said. “Our care, in a word, is superb and needs to be maintained at that level even though we have closed. So, we have very significant expenses.”

Part-timers work in guest relations and on programs that aren’t being operated now, he said.

The key word is “furlough.”

All the staff members are legally still employed by the Maritime Aquarium and retain their email addresses, their badges, and their personal time off, he explained. They’re not getting paychecks but are eligible for unemployment compensation.

The Aquarium is paying the employees’ portion of their medical coverage through April 30; after that, “We’ll have to reevaluate where things are.”

But for the part time employees, that’s not an issue. They’re neither furloughed or laid off, it’s just that they have no scheduled hours, Tison said.

“{F}or some of them, their hours at the Aquarium were a significant source of income for them, in some cases their only source of income, so they are very much affected as well as our full-time salaried and hourly staff,” Tison wrote.

There are multiple news reports about zoos and aquariums laying off staff.

The Living Desert Zoo and Gardens in Palm Springs, CA., laid off two-thirds of its staff due to the coronavirus, the Palm Springs Desert Sun reported. The New England Aquarium has furloughed 50 full-time employees and laid off 43, along with nearly 80 part-time and seasonal workers, according to the Boston Globe. And Global News reported that the Vancouver Aquarium laid off 60 percent of its workforce.

The Maritime Aquarium staff reductions were “based strictly on the roles and the needs” during the closure period, Patlis said.

All decisions are being made based on four pillars: animal wellness, community wellness, staff wellness, and institutional wellness, he said.

Patlis, who became Maritime Aquarium President and CEO in October, told the Board of Trustees that Friday, March 27, was “the most difficult day in my 30-year career.”

Patlis took a 50 percent pay reduction, Weil said. Other senior staff took a 30 percent reduction, among them an employee who hadn’t started work yet.

Danielle Tranzillo, newly hired as Director of Development , is being paid 30 percent less than she was promised when offered the job, Patlis said.

“We have ample food and other animal care supplies.  As most of our animals consume fish, we are able to keep a multiple-month supply on site in freezers,” Tison wrote. “Besides that supply of fish, we get regular produce deliveries for our animals that are herbivores.   Those deliveries continue as scheduled.”

“When I came in October, we had a deficit of $300,000. As the months progressed, we climbed up to nearly $100,000 in surplus last month,” Patlis said to the Board. “… from October through January we kept increasing the dollars year over year very significantly. We’re still are pretty far ahead from where we were in 2019.”

It’s not just staff reductions, he said. The expenses are lower just due to circumstances – there’s no money being spent on marketing, and the utilities are 20 percent lower with the doors shut. The IMAX Theater isn’t showing films so there are no licensing fees to be paid, and there are no credit card processing fees.

“It’s not just about reducing expenses, it’s about finding additional cash,” Patlis told the Board. To that end, the Aquarium quickly submitted an application to the Connecticut Recovery Bridge Program for a no-interest $75,000 loan. The response to that program was so strong, the funding was increased from $25 million to $50 million, and the State stopped taking applications after two days.

The Aquarium applied for $2 million from the Small Business Administration, under the recent stimulus program approved by Congress, Patlis said. He characterized that as “up to $2 million, with an appreciably low rate for nonprofit institutions of 2.75 percent.” A loan under the Paycheck Protection Program, a separate part of the CARES ACT, could be forgiven but there are still many questions to be answered.

“In addition, there’s a lot of other funding that is being made available for small businesses…in particular, cultural institutions,” Patlis told the Board.

A fundraising campaign is imminent, with the Trustees offering “a very generous seed challenge” matching grant of $80,000, so that donations will be doubled, he said.

The goal overall is to “make sure we have cash on hand for everything that we need, especially given the uncertainties.”

With the aquarium closed, staff has been offering online educational programs. It’s a source of revenue, as not only is it open to the public, but Norwalk Public Schools is a client.

Patlis on Wednesday said that 34 virtual learning opportunities had been posted in very short order.

“That’s an amazing number. And it cuts across all kids, all ages from pre-K up to senior year of high school,” he said, describing “immediate responses” when the programs are posted – 150 registrations overnight in one case – and 235 for another program posted on March 30.

Virtual learning sessions offered Monday include Fish Tales for preschoolers and Coasts that Shift and Change for sixth to 12th grades. A voluntary, tax-deductible contribution is requested, with these guidelines:

While the Aquarium’s clientele is obviously based in New York and Connecticut, people from across the country have been signing up for the classes, Patlis told the Board, including residents of Oklahoma, Colorado, and Michigan.

“It’s really great and it is exactly where we need to be going,” he said. “…We now have the world at our footsteps. This is a great start.”

Correction 5:46 p.m.: Paycheck Protection Program is a separate part of the CARES Act.

Nancy, thanks I told my son to sign my granddaughter up, from CO!