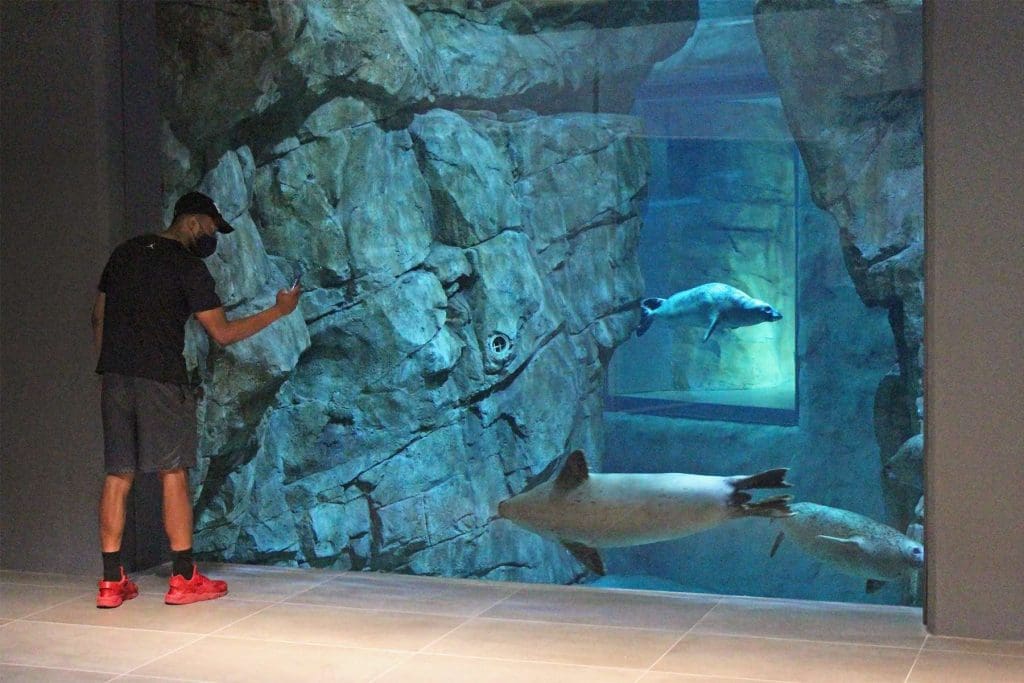 Floor-to-ceiling windows offer great underwater views of the seals in “Pinniped Cove,” an enormous new seal habitat in The Maritime Aquarium at Norwalk. Guests also can view the five seals from above the water in a new second-floor gallery. (Maritime Aquarium) 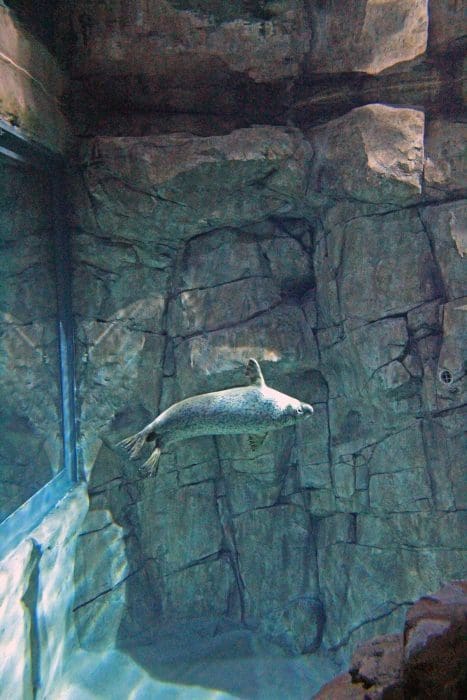 One of the harbor seals of The Maritime Aquarium at Norwalk takes an upside-down turn in front of a viewing window of “Pinniped Cove,” an enormous new seal habitat. (Maritime Aquarium)

The five harbor seals that have lived at the Maritime Aquarium at Norwalk for decades now luxuriate in “Pinniped Cove,” the Aquarium’s brand new 160,000 gallon 22-foot-deep habitat that is eight times the size of the seals’ previous abode.   Named for the scientific grouping pinnipedia that includes all seals, sea lions and walruses, the colossal two-story, fully indoor exhibit offers a three-sided two-level view: underwater on the first floor, and above the surface on the second floor.

The exhibit has a filtering system that is said to sanitize all 160,000 gallons every 66 minutes.  Also, a new adjacent veterinary facility contains three small isolation pools for care of the seals and other Aquarium species and boasts state-of-the-art life support systems.

“Pinniped Cove secures The Maritime Aquarium’s place as one of the premier aquariums in the nation,” Aquarium president and CEO Jason Patlis said. “Even the name ‘Pinniped Cove’ underscores a novel approach to our longstanding mission. Very few guests will likely know what a pinniped is when they enter the Aquarium, but everyone will know when they leave. And that’s our goal: to have guests excited to come visit, but inspired to learn while they are here.”

Together with the Aquarium’s recently opened 169-seat 4D movie theater and redesigned main entrance, Pinniped Cove represents the facility’s largest capital construction project in its 33-year history.  $40 million came from the State of Connecticut to compensate for the demolition of the old IMAX theater and indoor/outdoor seal exhibit necessitated by the imminent Walk Bridge replacement. Patlis said “I am extraordinarily grateful to Governor Lamont and to Norwalk Mayor Harry Rilling and their respective staffs for their partnership in this enterprise. That we completed the project in the midst of a global pandemic is a testament to the hard work and dedication of everyone involved.”

At the exhibit’s unveiling, Rilling said “This is a great day for The Maritime Aquarium and all of Norwalk.  Today’s opening is the result of ongoing partnerships and collaboration between many stakeholders. The Maritime Aquarium is the region’s premiere attraction and I know residents and guests are going to truly enjoy Pinniped Cove when they visit Norwalk this summer.” 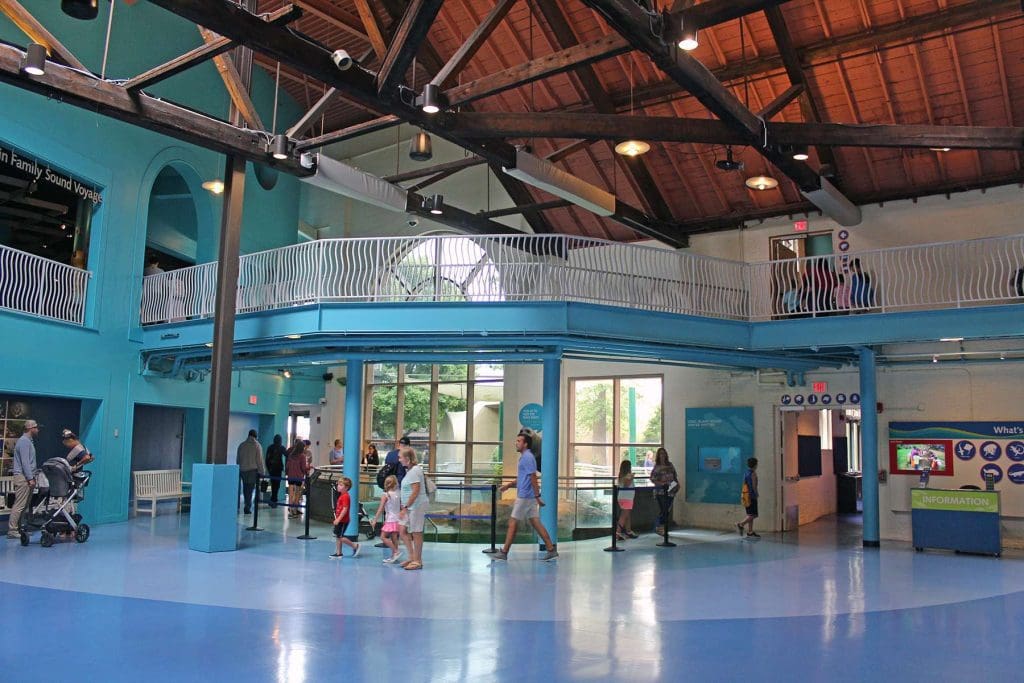 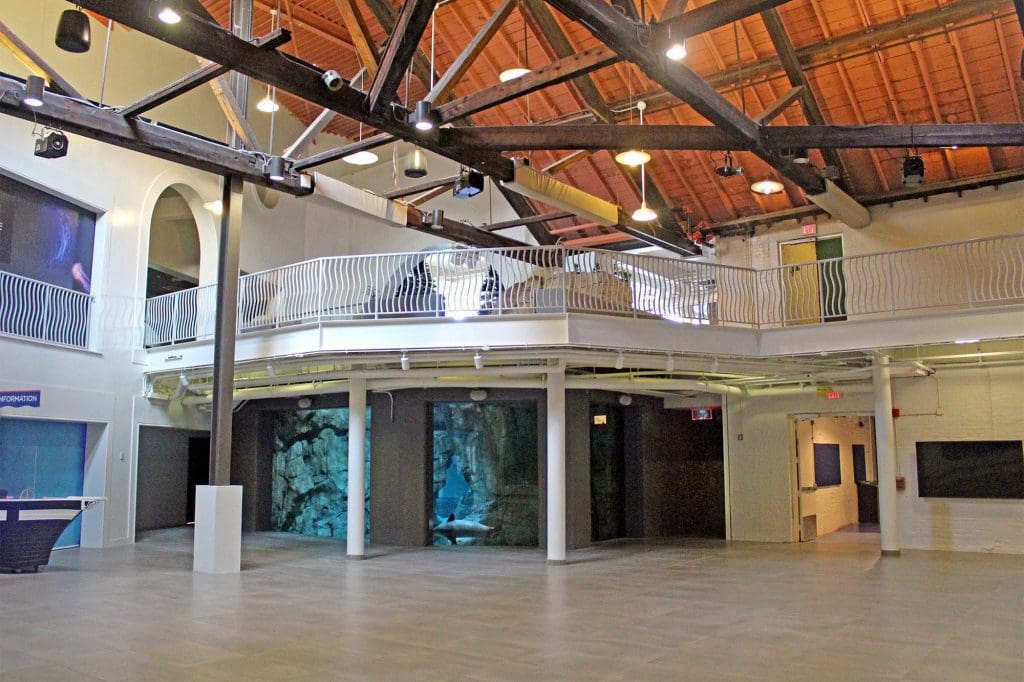 The League of Women Voters of Connecticut announced the election of its 2021-23 board of directors at its recent convention.  Norwalk League member Laura Smits is the new president.

Smits, a former League voter service vice president, said “I’m honored to be president of the League during this exciting time of increased voter awareness and voter engagement. In the coming years we hope to continue partnering with other non-profit groups and expand our reach to ensure that every eligible Connecticut citizen is registered and given the tools and information to actively participate in our democracy.”

Outgoing President Carol Reimers said, “As the League of Women Voters of Connecticut enters our next 100 years, it is exciting to have the leadership of this exceptional Board of Directors. They bring a wealth of talents and expertise to promote the mission of the League.”

The “2021 Summer Reading Challenge for Adults” is up and running according to a press release from sponsor Norwalk Public Library (NPL).

Thirty different challenges, each worth one point, can be found by clicking the “Adult Summer Reading Challenge” revolving banner at www.norwalkpl.org.

A sampling of the challenges includes:

A leaderboard keeping tabs on challenge participants will be updated weekly

The challenge was developed by NPL Reference Librarian Nicole Andrzejewski and Library Assistant Carrie Varga.  “We wanted to create challenges that not only broaden your reading interests but to also highlight Norwalk.  I hope everyone has as much fun playing as we did creating it,” Andrzejewski said.

“The Library Staff is so excited to welcome our patrons back into the Library to browse the incredible collection of books and other Library materials just waiting to be checked out,”