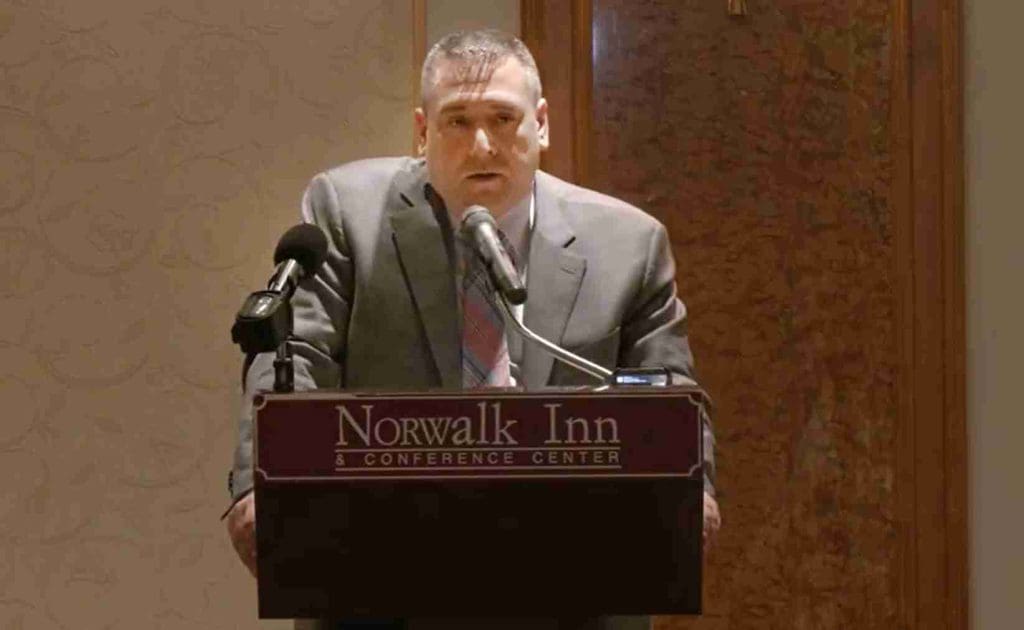 “I don’t have a lot of time,” Mastronardi said Tuesday in the Norwalk Inn. “But I was sick and tired of sitting on the sidelines and complaining about what was going on. And I said finally, I’m ready to take stand. … I’m here to help make change in the state and will move us forward and making sure that all of you have a better opportunity. Because the state is crushing us. They’re crushing small businesses like mine.”

Mastronardi, who characterized himself “a humbled kid from Cortland, New York, born and raised in a blue-collar town, blue-collar ideals, wanting just to make a difference for people,” faced no opposition to his candidacy.

Mastronardi is also owner of Mastronardi Family Investments, LLC, according to his LinkedIn page. Intelius reports that Mastronardi earned a bachelor’s degree in accounting with a minor in sports management from Ithaca College in 1998. He has never run for office before.

Mastronardi bought Dry Dock Bar & Grille in late 2015, according to his LinkedIn page. In April 2020, he was charged with violation of a public health emergency order, a misdemeanor, when a patron opened a beer can in the bar. Gov. Ned Lamont had forbidden restaurants and bars from allowing folks to drink inside their establishments.

He was the “first one” to face legal action due to COVID-19 restrictions, he said Tuesday, calling it “a badge of honor.”

One person was sitting in the bar waiting for to-go food and the bartender gave him a can of beer as take out, but the food took a while and the customer opened it, he said. Mayor Harry Rilling sent eight police officers, according to Mastronardi.

“This is the kind of stuff we’re dealing with,” Mastronardi said. They can shut me down or give me a ticket for a nonsense thing, which I’m licensed to sell. But then you can go protest in the streets with thousands of people yelling and screaming in people’s faces … we need to step up and say enough is enough.”

Republicans need to “convince people that we have better ideas, that we stand for what they want, and we have to stand for them,” he said. “… We’re not evil people either, because conservatives or Republicans sometimes get an evil connotation to them. Don’t know why. Maybe it’s because we don’t do a better job of communicating.”

Everyone knows about inflation and high taxes, he said. “We have to communicate what our idea is to make things better and to get change. We can do this, we have to do it together.”

When is the last time anyone can remember a candidate running for the General Assembly on a platform of encouraging better outcomes for small business ? As opposed to commitment to “save earth”, “end racism”, “more jobs”, “lower health costs”, “lower crime”, “better highways” and :attracting big business” ?

He did a great job at the meeting we need more common sense leader ship in our town or state or country I just join the Republican party after being an independent unaffiliated for 45 years, since I was 18 years old! I need to take back our country and bring back the values that made this country great when are you ancestors came here from Eataly and many other places. Hard work, sacrifice and playing by the Same rules for everybody!💪🏼🙏🏼🇺🇸🌎

We need Republican , conservative policies more than ever. They are business friendly.

Unlike the current administration who wants to tax into oblivion. And we wonder why so many headquarters of companies that used to be in CT have left to other states?

Get Ned Lamont out.

Get one-party Democrat rule out.