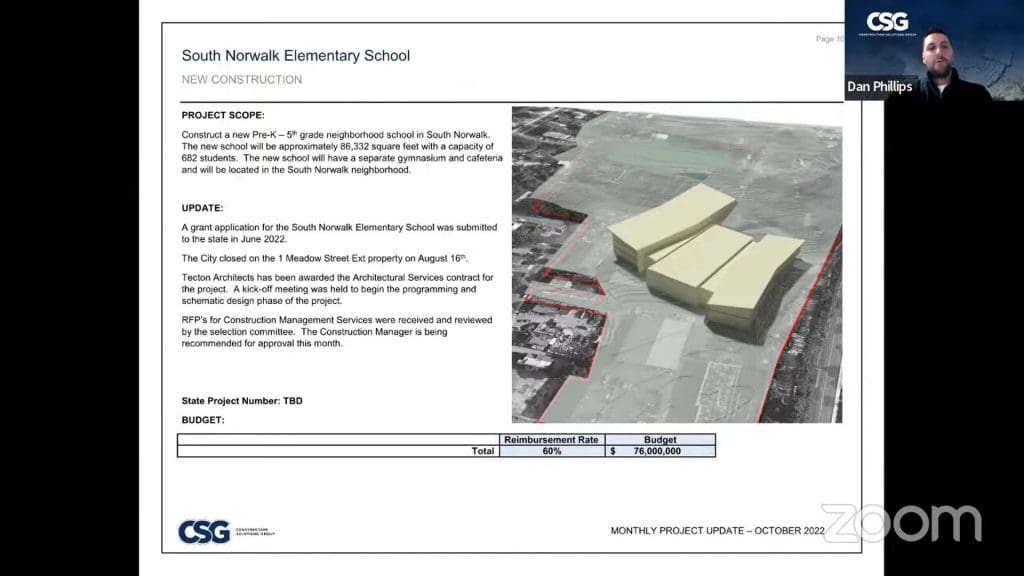 NORWALK, Conn. — The plan to build a new school in South Norwalk is proceeding without the support of a former Board of Education member.

Common Council member Bryan Meek (R-District D), who was involved in the scuttled plan to build a school off Ely Avenue, asks why that plan can’t be resurrected.  His Council colleagues are moving the plan forward, awarding a $2.8 million contract last month to Tecton Architects and now standing poised to hire Newfield Construction Group, LLC as the project’s construction manager at just over $2 million.

Meek, the lone Council Republican, is a no vote.

The Council in 2017 authorized $42 million for a South Norwalk magnet school to be built behind the Nathaniel Ely preschool center. The rub, though, was that it required some of the space in the neighboring Springwood Park, and South Norwalk leaders Bruce Morris and Travis Simms opposed it. The City needed permission from the Connecticut Department of Energy and Environmental Protection (DEEP) for a land swap; park land anywhere in the city was legally feasible but Morris, who was State Representative until 2019, and Simms, who succeeded him, fought the application.

The City finally gave up and earlier this year, announced a deal to buy nearly 12 acres on which to build a school, now planned for neighborhood kids due to the changing demographics cancelling out the need for racial balancing.

In February, Building and Facilities Manager Alan Lo said about $3.5 million had been spent on the failed Ely school plan, including $1.7 million to acquire property on Tito Court through eminent domain. Tennis courts were moved and there were architectural fees.

Courville Nurseries, a thriving business that rented space from Hatch & Bailey, received compensation as part of the transaction, Lo said.

“I’m involved with the law department and economic development to help them to see if we can find a site for them. It’s gonna be very challenging,” Lo said. “…I think there’s like a strong interest in the community to keep this company,” but it’s “tricky” because of the zoning regulations.

Courville Nurseries both grows onsite and operates a retail component, which makes it “very difficult,” Lo said. The business can stay there through next year, “but again, it’s not that simple (of a) thing.”

Last month, Meek asked if a topographical analysis of the property had been done and if core samples had been taken. “The whole scope of that property is filled with ledge,” he said.

“Hitting ledge, it’s not our biggest problem, it typically it’s when you have soft grounds, that’s when there’s more problem,” Lo said. The City did controlled blasting with the Ponus project, while the kids were in school.

Meek pressed further on the history of the school project, the money spent on the Ely site. The plans are fully fleshed out, down to the tiles, and, “all of a sudden you have 12 acres of land,” he said. “Is there an opportunity to go reapply for the Ely school at a 60% reimbursement rate and have kids in a park-like setting instead of on a main corridor of trucks, garbage trucks?”

Some have suggested the private transfer station just down the road be moved. Meek asked, “Where the hell are you gonna move that?”

He suggested that the newly acquired property be used for the land swap. This would mean going through a DEEP approval process.

Council member Barbara Smyth (D-At Large) suggested he talk to Lo to learn the history of the Ely school. In short, it was “the state DEEP that put the kibosh on the project.”

Lo didn’t reply to an email asking about the possibility of using 1 Meadow St. Ext. for a land swap and going ahead with the previously approved plan.

Meek said Monday that he hadn’t met with Lo.

“I’m still voting against anything to do with siting a school near the scrapyards until the point where they look at seeing if the 11 acres could be made into a park and part of the parkland could be used as land swap and complete the original Springwood park plans that we have spent over $3 million on collecting dust.

“The Springwood park site plans provided for more acreage of recreational space than what is currently there once it chopped down the areas of overgrowth that have never been maintained.   It’s not clear to me why this fact is glossed over.   The arguments that the theme wasn’t for a neighborhood school are a farce as well seeing than any BOE in any year can change policy and curriculum wherever they want.

“With the 60% reimbursement rate, the city could build the school at Ely and save $15 million in the process, which could be used for more land purchases.  While the number of seats wouldn’t be at par, it would be a huge down payment on the need to have more schools south of I95 and west of the river.

“What’s sad is I don’t think many involved in the decision making process at the elected level are familiar with the challenges of the area on Meadow street with respect to flooding, truck traffic, diesel exhaust, etc….  Even Jefferson located on 2 state roads is more appealing for a school than the H&B site.  If you take a walk down Meadow st at 6 a.m. without eye protection, good chance your eyes will be tearing from the fumes.  Some think CIty Carting could be moved and a domino effect will happen, but no one can say how long?  Is a few more decades ok?  Where would City carting move?  Would Wilton or New Cannan take them?”

Tecton Architects’ bid was about $7,000 more than the lowest bidder but “we thought they would be the best fit for this project,” Phillips said in September.

“I think we were all very impressed with their focus on the community, as Dan said, and their desire to integrate them in into not only design of the building and public spaces, as well as how it fits in the whole community,” said Land Use and Building Management Committee Chairman Thomas Livingston (D-District E).

There were seven responses to the call for a construction manager, Lo said Thursday. The City plans to start construction in 2024.

There was no discussion. The item is on the agenda for Tuesday’s Council meeting.

Thank you Bryan for opening peoples eyes for some discussion on the topic. All the dems on the council just say yes like robots to whatever Harry wants. Obviously, Hatch and Bailey gets a huge buyout when then themselves are on the way out of business. No one discusses the 3 million we wasted on the other property either. Nice to see at least some dialogue even though they will always vot for whatever the mayor asks for.

Good questions and some pushback sharpens ones plans.

Keep it up Bryan.

You left out the part where Norwalk had tacit approval from the state before it acquired land and developed plans for 3.5 million…..only to have the person DEEP retire….then along comes a new hire that changes their mind about it and Norwalk gets screwed.

This time around were only $19 million into it and hopefully not one retirement/new hire away from some low level bureaucrat at the state level from squashing the plans.

THANK YOU Bryan for standing up for us and our money!!!! It really stinks when we have both a Rubber Stamp CC and BOE! What the hell do they care its not their money. And the CC maybe instead of just Rubber Stamping along should actually LISTEN to Bryan because he is the smartest person in the room when it comes to these things. He knows his stuff cold and has the facts to back it up. But we all know facts and truths don’t figure in anymore. Its who’s pockets got lined lets be real. Ya know, its kind of like the Mayor’s response to the water emergency about all the apartments continually being built..They don’t use a lot of water. I guess if you live in apartment in Norwalk Showering is not needed. You can’t make this stuff up.

I for one am delighted that we have at least one common council member who asks questions, pushes for different solutions, and is willing to challenge the status quo. Bryan’s idea’s also seem to accomplish something novel – they save Norwalk money while delivering a better end product. What a concept!

But let’s get the 10,000 pound gorilla in the room out in the open: Travis and Bruce didn’t reject the Ely site because of the land swap, they killed it purely out of fear that the area – long the core of “South Norwalk” – would suffer mass gentrification from all of Harry’s developer buddies. The same one’s quietly buying up (spec) all the available lots in South Norwalk now. Norwalk is all but unaffordable for the generations that have called it home – but as soon as you see a Starbucks open where the Sono Mini Market is today – some LLC is about to present plans for a 500 unit appartement complex that will change the area forever. Kleppin couldn’t / wouldn’t have it any other way – marching orders.

@Evan. Point of clarification. When Barbis and a majority of the Board wanted it in a park-like setting, expanding the features and open acreage of the park, it was deemed a bad idea by a small handful of bureaucrats, some un-elected. The community outreach surveys from several public hearings showed overwhelming support for the plan from scores of neighbors. That public outreach was done before $ millions were spent on planning.

But now that it will cost Norwalk and CT taxpayers an additional $50 million to locate it near the scrapyards. This is considered a great idea with minimal and sparsely attended public outreach. We’re $20 million into it already and to my knowledge, there has only been the one meeting in late May on the programming choices and there don’t seem to be any news articles about that anywhere.