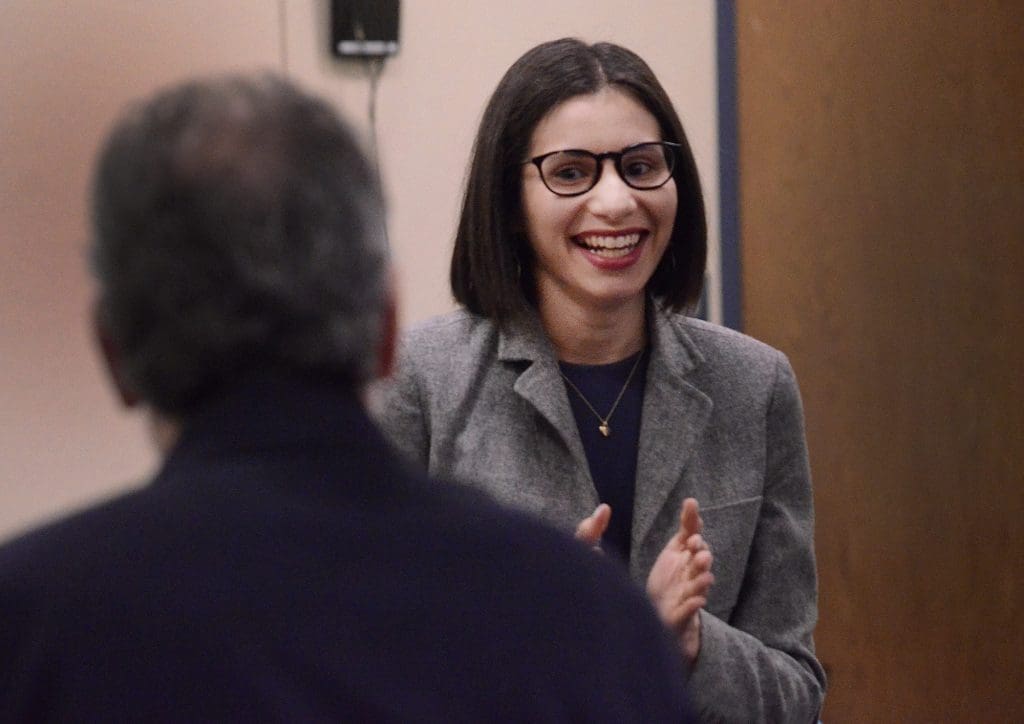 NORWALK, Conn. – The often-contentious Norwalk Democratic Committee elected Eloisa Melendez as its new leader Monday, in what might be described as a “love-in.”

Melendez faced no opposition in her drive to be DTC Chairwoman, replacing Ed Camacho. All candidates cruised to victory without opposition, including new Vice Chairwoman Jacquen J.J. Byron.

“I am just so thankful for this opportunity and to build on the growth of this party,” Melendez said, noting that it has 35 female members now and when she was first elected as a member, it had 35 members total. Now it’s 55 members and more than half are female. 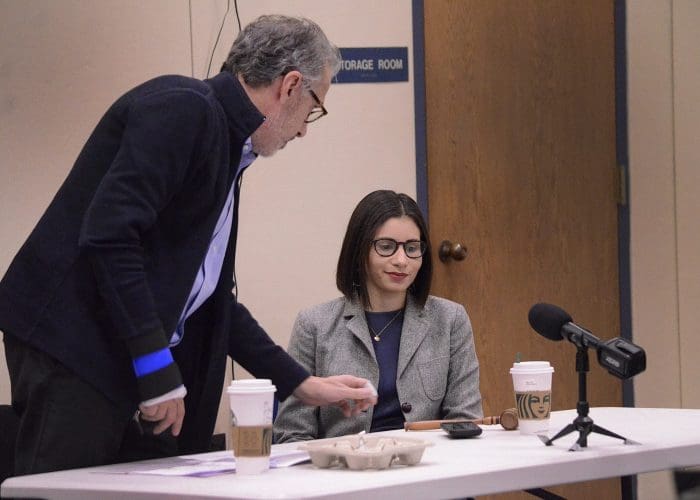 Camacho, in exiting, said, “What differentiates us from The Republican Party is our diversity and our growth and also our young people who continue to enthusiastically join the Democratic Party.”

Common Council President Barbara Smyth (D-At Large) nominated Melendez, who was elected to the Council in 2013 when she was 19 years old and chose not to run for reelection last fall.

“I don’t think I know another person who is as ardent and steadfast Democrat as Eloisa is,” Smyth said. “She has impressed me so much with her loyalty to the Democratic Party and our ideals, more than just about anyone I’ve ever met.”

“There are voices that are not heard, and they need to be heard, in particular District B. And I think that Eloisa has the perfect approach to bring us together,” Smyth said.

“I’m going to be honest, almost seven years ago when I first got involved in this party … I never thought that, you know, DTC leadership would be something that I would be interested in,” Melendez said. “…But I really enjoyed my time as your Vice Chair and I really am thankful for your confidence today as Chair. And I know that many of you know me, some of you think you know me, but I hope to surprise you.”

Melendez awarded Camacho with a plaque honoring him for his contributions to the party. 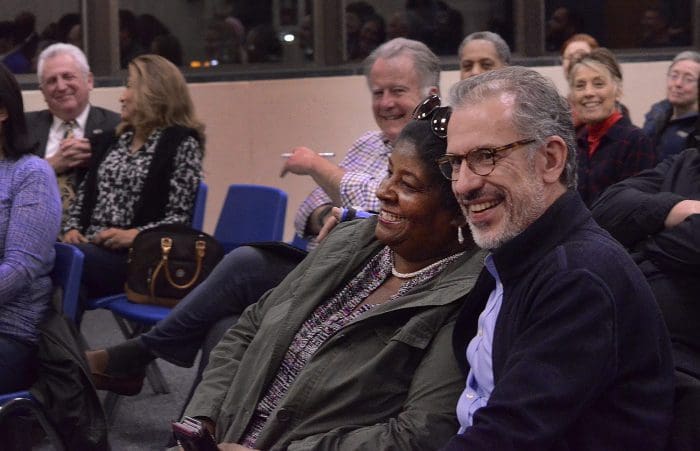 Norwalk Branch NAACP President Brenda Penn-Williams and formerDemocratic Town Committee Chairman Ed Camacho accept applause Monday in the Norwalk Public Library, after DTC Chairwoman Eloisa Melendez pointed out that he sat down with Penn-Williams, something you would have never dreamed of six years ago.

“It’s been a privilege to serve as the chair of the DTC the last six years through turbulent, a turbulent beginning made even more turbulent by the change that we that we instituted,” Camacho said, referring to the expansion to 55 members “and adding new voices to the DTC as well as insisting on excellence in our candidates for elected office.”

“And now for the first time, I think in a while, a nine to zero majority on the (Board of Education) and we have elected a mayor for four terms and we hope to make that five terms next time around and to continue that,” Camacho said. “We have as diverse a Common Council as we’ve had. And we have, I think, a more diverse Board of Ed than we’ve had in I think ever, certainly in quite some time.”

Sometimes Democrats disagree, as has been seen recently in the rift over the Board of Education budget, he said. “But that’s because we take governance seriously.” 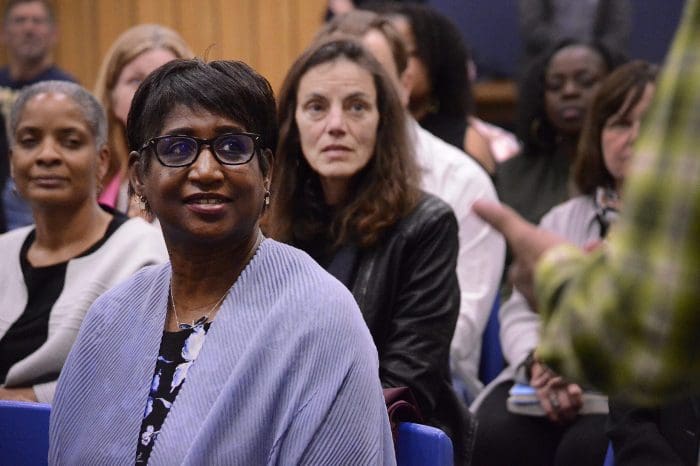 “We’re now divided,” Sonia Oliver said. “And it showed more than anything in this past Mayoral election, because we had some Democrats that wanted to wanted to support the Mayor. We had other ones that didn’t, and we were actually falling apart with that. So I think it’s time to bring people that are going to say, I want nothing but inclusion.”

Byron is one of those people, she said.

“I’ve had the opportunity to watch Jackie from the time she first started attending DTC. And from the very beginning, she talked about inclusion, being represented and the importance of bringing everyone together,” Oliver said.

District B Democrat Ron Banks, who in January decried DTC process as leaving some members out, lauded Byron as being “very skilled at conflict resolution.” 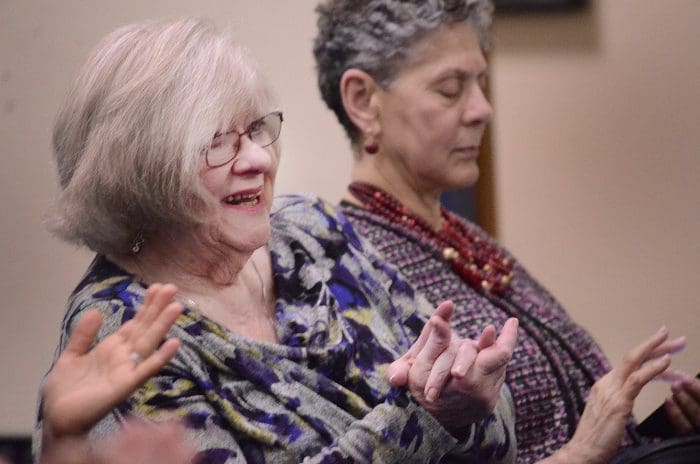 “She accepts the democratic process. She believes in the ideal of democracy. And as an individual, she uses all of her skill sets to make sure we can come together as best as we can,” he said. “And then as vice chair, it was already opened up that we’ve had some challenges. I think this time to get beyond the abrasions.”

Pat Marshak was reelected treasurer and Elsa Peterson Obuchowski was named deputy treasurer. Colin Hosten will continue as recording secretary, and in the finale of the conviviality, Darius Williams and Esther Murillo stood in unison to nominate each other to continue as co- corresponding secretaries.

“We’re going into 2020 and we want to have a greater momentum than we’ve ever had,” Williams said. “This is an important year, this is a life changing year, with the census, getting rid of the current occupant of the White House and working on our state elections. You know, we have some great people running for our state legislature who we need to campaign for and get out the vote and continue promoting the Democratic message.”

I’m curious on the professional background of Melendez and Byron: Are they lawyers?

It’s Norwalk. Even in a “contested” election, a glass of water with a “D” on it can win ~ Speaker Pelosi.

Congratulations to all running