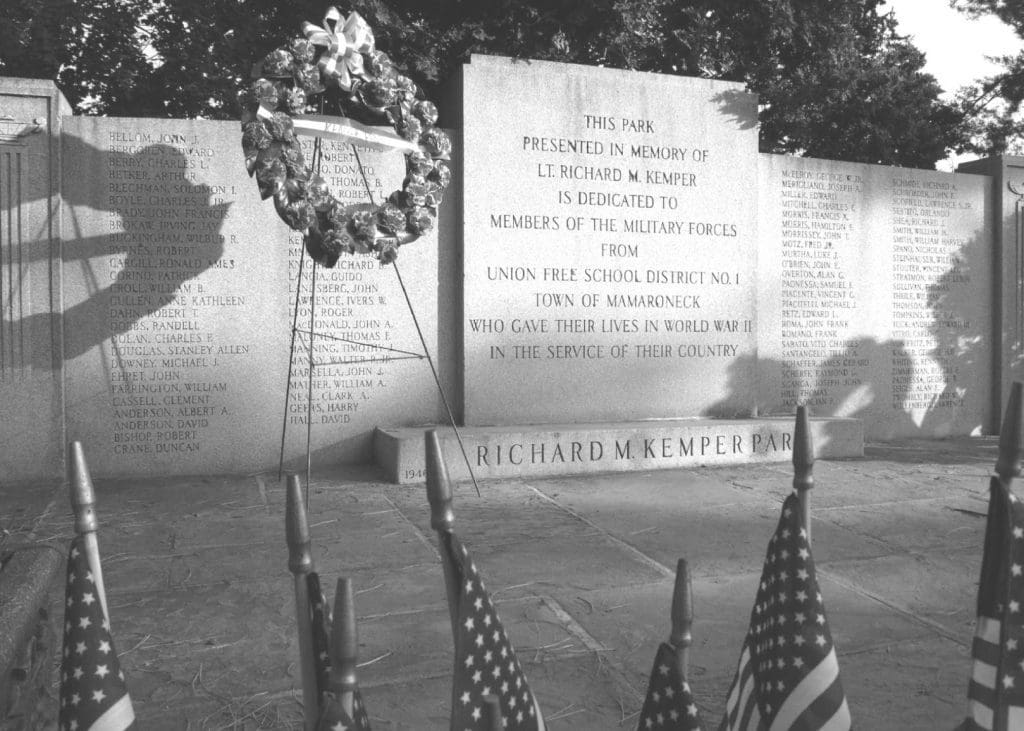 This year I won’t be attending the annual Memorial Day ceremony in Richard Kemper Memorial Park as I have been wont to do for the better part of a century.   Unfortunately, due to the coronavirus pandemic it, along with the Memorial Day parade in Norwalk and similar Memorial Day events everywhere, has been canceled.

Richard Kemper, my uncle, was killed on Aug. 5, 1944, in the Battle of the Hedgerows.  After he was killed my grandparents, Adolph and Helen Kemper, purchased land adjoining Mamaroneck High School in Mamaroneck, N.Y., placed a monument on the land on which Richard’s name and the names of 97 other men and one woman from the community killed in World War II were engraved, and dedicated it to the school district as a park in their honor.

Then in a dedication ceremony on May 25, 1947, West Point Graduate and Commander of Fort Slocum, Col. Bernard Lentz said, “In presenting this Park to the people of Mamaroneck you have seen to it that the heroes of yesterday will not be pushed out of our recollection or the recollection of the generations of boys and girls who will be receiving the blessings of liberty in the shape of an American common school education.”

So what would I say if I could stand in the park today, nearly three quarters of a century later, and speak to the latest generation of those boys and girls?  I would say:

Today is Memorial Day.  Memorial Day means different things to different people.  For some it means the end of the school year and the beginning of summer vacation.  For others it means a three-day weekend marked by picnics and parades.  For still others it means a time to remember loved ones who were killed in the wars we fought and to honor them for their bravery as well as to thank and honor current members of our armed forces for their service.   And then there are those, following the example set by Frederick Douglass, for whom it serves as a time to reflect on the enlightenment values embodied in our founding documents and that we would like to be held by everyone everywhere.

Douglass, an escaped slave, referred to those values in a speech he gave in Arlington National Cemetery on Decoration Day, May 30, 1871.  Decoration Day, a day in which the graves of those killed in the Civil War were decorated with flowers, eventually morphed into Memorial Day.

“We are not here to applaud manly courage, save as it has been displayed in a noble cause,” Douglas said.  And that cause, he made clear, is to create a world in which in the words of our Declaration of Independence everyone is endowed with “certain inalienable rights.”

So what is the war against the coronavirus today teaching us about how we can best honor all those who died defending one nation, indivisible, with liberty and justice for all?  It is teaching us that wars aren’t likely to end until that one nation is the entire world.   It is teaching us, in other words, that rather than building walls that separate us from our neighbors we should be tearing them down.

Recall President Ronald Reagan’s famous 1987 appeal to Mikhail Gorbachev before the concrete barrier that separated West Berlin from East Berlin.   General Secretary Gorbachev, he said, “if you seek peace, if you seek prosperity for the Soviet Union and Eastern Europe… tear down this Wall!”

Today, the coronavirus is sending a similar message.   If we seek peace and prosperity, we need to join together to fight all the viruses that threaten us including but not limited to the coronavirus, xenophobia, homophobia, misogyny, poverty, illiteracy, and hunger.

That is the reason the United Nations was formed after World War II and the Universal Declaration of Human Rights was drafted.  And that is the reason today we should remind ourselves that we honor our fallen love ones best by dedicating ourselves to creating the just and peaceful world they died fighting for.

2020 is the 20th year of the Kemper Human Rights Education Foundation’s human rights essay contests for high school students.  One contest is for students in the United States.   The other is for students in other countries.  Never since World War II have human rights been so threatened as they are today by the coronavirus pandemic.  Never since the end of the war has it been more important to engage the best and brightest of our students everywhere in an effort to point out where and how they are being threatened and undermined and what needs to be done to ensure they are respected everywhere.  That is what KHREF will be attempting to do this year.  For more information about the foundation and how you can support its mission visit khref.org.

I’m thinking of the phrase “trust but verify”. There are reasons we need to keep our eyes wide open. If we believe China is trustworthy (country with 1mm Muslims in re-education camps) and clearly the start of this pandemic. If we believe that Islam is a peaceful religion (talk about homophobia and misogyny) and that the supporters of 9-11 wouldn’t want to see it again or worse. The evil in the world 75 years was clear to the vast, vast majority of Americans. Now, we devolve to a secular society which is a core virus which is ok to so many.

Today we memorialize all those who served to protect our freedom, our values, our way of life

This year we gave all that up and ceded our rights to big government to protect us.

The 1968 Hong Kong Flu killed 100,000 in the US and over 1mm worldwide. No shut downs, school remained open, people did not live in fear. Fear of loosing our rights was more important.

I agree with you whole heartedly. Thanks for sharing your thoughts and continuing the Foundation’s essay contest year after year.