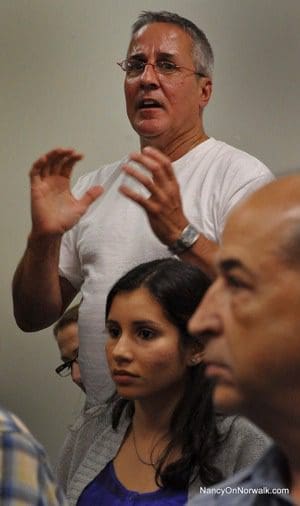 “This” is two arrests for driving under the influence of alcohol and one for “evading responsibility” for a traffic accident.

“Interesting to me that they would put somebody up for office without fully vetting him and finding out about his past criminal record,” Torrano said.

“It’s a shame that Mr. Torrano wants to do personal attacks,” Metsopoulos said. “I have nothing to hide. I am not proud of my DUI but everybody makes a mistake in life, and I paid my judgement. I think Mr. Torrano needs to vet some of his own candidates, including the former mayor.”

Wednesday, Metsopoulas reported being the victim of an egg assault Aug. 8 on East Avenue, claiming one of the attackers yelled “You’re going to lose” after the egging. Metsopoulas, who said he was walking home from work at Harbor Lights at the time, went to the Station House, where he knew friends were working.

That brought a response from Torrano, who expressed doubt about the story.

Torrano said there “was at least one person in the Station House” when Metsopoulos came in and, “According to them he was egg free when he walked in the door.”

He declined to identify who the witness was.

“I have some serious doubts that this actually happened,” Torrano said. “I think it’s a pitiful attempt to gain sympathy and get votes and I think it’s an embarrassment to the Democratic Party.”

The Station House bartender backed up Metsopoulos’ story, and, after the news report appeared, at least one more egg attack was reported. Norwalk Police stopped an SUV with four under-aged youths and an unlicensed driver and found a box of eggs. According to a police spokesman, police are looking for a second vehicle.

Torrano left a comment on that story on this site with non-specific referrals about past incidents involving the Democratic candidate, who is running in a field including incumbent Republican Michelle Maggio, Republican Mike Demo and fellow Democrat and incumbent John Kydes.

“If readers are interested they can check on other interesting facts about Mr. Metsopoulos by looking up stories and editorials printed in the Fairfield Minuteman regarding his behavior. His arrest records are also available. The one when he struck a woman’s car from behind and fled the scene is a good one to start with.”

The traffic accident was in 2003. Metsopoulos, a former Republican who served 10 years as a state legislator and four as a Fairfield selectman – two as first selectman – said he paid a fine and the accident was expunged from his record. He said it was a minor rear-end collision and he stopped and spoke with the woman in the car he hit. He said they agreed to not involve police or insurance companies, but that she changed her mind later and called police. According to the news story dated Oct. 28, 2003, “a witness was able to write down his license plate number. Metsopoulos turned himself into Fairfield police Friday morning.”

As for the DUIs, he said he was guilty, and admitted that driving while intoxicated is a serious offense.

“I apologized,” he said. “I made a bad decision and handled it poorly.”

He said he brought up the incidents as soon as he was approached to run for the Common Council.

Torrano, in his comments on this site and as quoted in another publication, alluded to an editorial in The Minuteman in October 2001, along with a front-page story, but not the subject. NoN could find no record of an editorial, but found the story on Oct. 8, 2001. The story concerned a so-called “feud” with the Fairfield Fire Department union over volunteering at Ground Zero in the immediate aftermath of the World Trade Center terror attack and over contract and budget decisions made months earlier.

‘The latest clash involves Metsopoulos’ decision to temporarily prevent firefighters from volunteering in New York after the Sept. 11 events, and accusations that the first selectman loudly criticized firefighters in public on Sept. 12.

Metsopoulos lost his re-election bid in 2001.

“I understood their feelings very well,” he said of the firefighters, who he said wanted more money in the negotiations and who were eager to help in NYC. “But I was First Selectman, and in negotiations I was committed to balancing the needs of the firefighters with the need to keep the budget under control.” He said several municipal unions were negotiating new contracts and everyone wanted more.

Metsopoulos said that, during his tenure, Fairfiield held spending to a minimum and maintained a Triple A bond rating with a positive outlook from all the agencies. This was, he said, despite having to bond “a quarter of a billion dollars” to build and renovate schools.

“What happened in the past happened and I won’t try to hide it. I’m not proud of it. But I want to run on my record as a legislator and as a selectman, “ he said.

“Am I going to run away because I made a mistake in my past life?” Metsopoulos asked. “What political candidate has not had something in their past that they are not proud of?”

Metsopoulos added a final thought: “They must be doing this because they’re afraid I might really win.”

(NoN will take a complete look at Metsopoulas’ achievements and those of all cooperating candidates prior to November, starting with the primary candidates.)

The editorial I reference is dated October 11, 2001, and is titled “Pull us together, not apart.”

It starts out with this sentence: “Just when First Selectman John Metsopoulos should be working to pull the town together, it seems that he is alienating his constituents, group by group.”

It’s all downhill from there. Next to it is a not too flattering political cartoon that shows how divisive Mr. Metsopoulos is. As to the DUI arrests and the evading responsibility, Mark, you referred to them as minor in nature. May want to check with MADD and all the law enforcement people you can reach to see if they think DUI is a minor offense. I can understand that it may happen once to even the most conscientious person who is careful about what alcohol they may consume before driving, but twice? And, it was because a good samaritan took the time to write down Mr. Metsopoulos plate number that he then turned himself in. He was a Selectman at the time.

Point of all of this is that he decided to report, 4 days after the egging event, that he was egged. Fine! […]
Not surprisingly, I have the editorial if you would like a copy. […] being told of his antics was something that I did not search out, it was given to me by some of his past constituents.

This comment was edited to remove violations of our comment policy. Also, we would accept a copy of the 14-year-old editorial offline. The fact that it does not appear in the newspaper’s online archives while other stories from the period do indicates there could be problems that caused them to pull it. We will check that with Minuteman.

Good point, the Republicans need to check their own house first, lots of rumors were flying around about the former mayor and coverups.
Can NoN check those out too?

That is pretty low…admit to crimes, make excuses and then blame someone who is not around, was never arrested for a crime? That might even be libel as Moccia is not a public figure and could easily demand an appology.

We could spend months or years running down rumors that come to us about lots of people and things. We do spend time looking into things given us “off the record” to see if we can verify or get someone “on the record.” Sometimes people are simply too ashamed to come forward, or too afraid of being attacked with attempts to discredit for reporting a crime. Unless someone were to come forward publicly as a victim of someone’s actions, or bring us some sort of verifiable evidence of illegal actions, we will not be spending time chasing the past.

Wait a second, Torrano throwing stones again. Isn’t this the same guy when he was a police captain got his gun “stolen” in a “burglary”. […] Then the gun was recovered in a shooting in South Norwalk. The DUI doesn’t sound so bad now does it.

This comment was edited to remove a statement that would imply wrongdoing or illegal behavior, something we cannot independently corroborate and that Mr. Torrano denies. The DUI was illegal behavior admitted by Mr. Metsopoulos.

Just a point of clarification: Does the Chairman of the Norwalk Republican Party still dispute the question of whether John M. in fact got egged? It is unclear whether the Chairman has backed off of his prior comments implying that this was a fabrication.