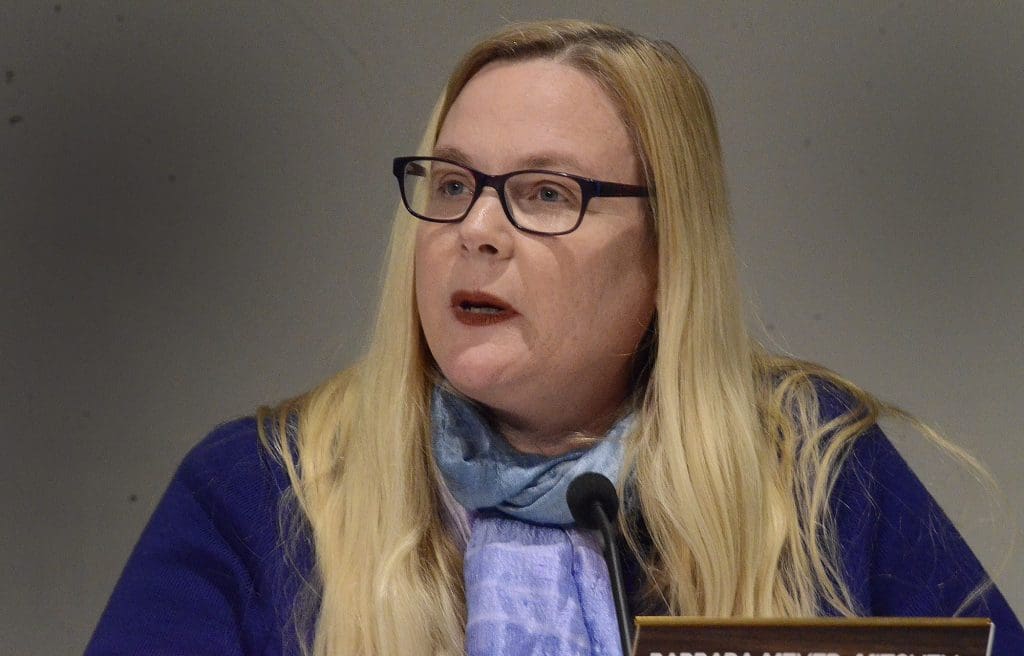 Norwalk Board of Education member Barbara Meyer-Mitchell, in 2020. (File photo)

NORWALK, Conn. — Barbara Meyer-Mitchell has resigned from the Board of Education, effective Friday.

Meyer-Mitchell was first elected in 2017 and is leaving eight months ahead of the end of her term. The Democrat has said in an op-ed that she is leaving to focus on her two children after helping Norwalk Public Schools make “significant progress” during her 3+ years on the Board.

“The cost of service is high, with many evenings spent away from family. While I have been operating as if I have 11,683 children, I need to focus on the two that are mine for a bit,” Meyer-Mitchell wrote.

Board of Education Chairman Colin Hosten noted the resignation at Thursday’s Finance Committee meeting, saying that Meyer-Mitchell had examined the priorities in her life and decided to move on.

“We are indeed sad at the news of Barbara Meyer-Mitchell’s resignation,” Hosten said in a statement. “Few in Norwalk have worked harder on behalf of our schools than she has in the past decade. We honor and thank her for her years of dedication and service, and we respect her decision to step back from her public role at a time when so many disruptions have caused us all to refocus on the priorities of wellness and family. And we know that she will continue to be a champion of public education in whatever capacity she can. Thank you, Barbara, for everything.”

“I too, wish to extend my deepest gratitude to Ms. Meyer-Mitchell for her unwavering advocacy for our Norwalk Public Schools and the children of Norwalk,” Mayor Harry Rilling said in a statement. “She has made it her life’s passion and many have benefitted from her efforts.  She will be difficult to replace.” 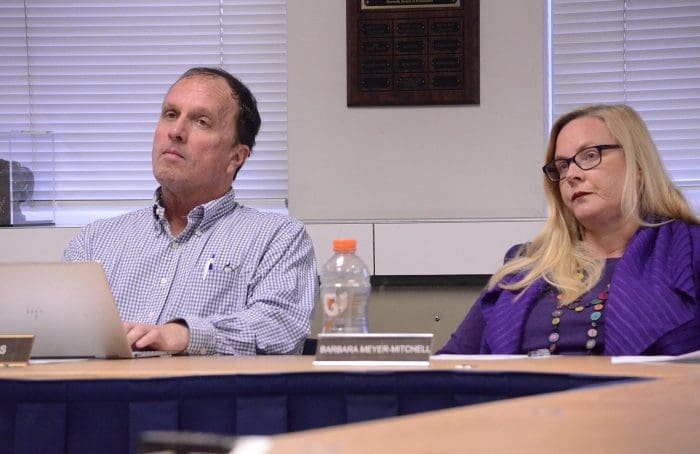 Meyer-Mitchell’s first two years on the Board were marked by then-Board Chairman Mike Barbis attempting to marginalize her, after appointing her to the Curriculum and Facilities committees, targeting her for snide remarks when she spoke up during meetings.

Her resignation comes as the U.S. Congress passes the American Rescue Plan, which the Connecticut Post reports will send $77 million to Norwalk’s budget. Of that, $38 million is expected to go to the schools.

“The American Rescue plan is an incredible opportunity for Norwalk to rebuild after the devastating challenges this year. It is definitely a relief to know that funding will support vital work for The City of Norwalk and the Board of Education,” wrote Meyer Mitchell. 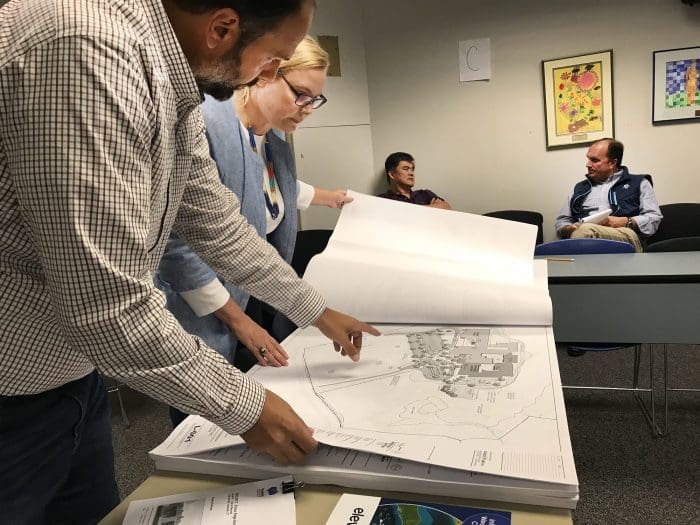 Mayor Harry Rilling and NPS Chief Financial Officer Thomas Hamilton did not respond to a Saturday email asking what the American Recovery Plan might mean to the city’s budget. The Platte Institute reports that ARPA allows greater flexibility in how these funds may be used than in last year’s original CARES Act, but also contains some restrictions on how state and local governments can use the funds.

Meyer-Mitchell’s decade of devotion to Norwalk Public Schools, as mentioned by Hosten, includes traveling to Hartford in 2017 to testify for changes in the Educational Cost Sharing formula, while in a wheelchair due to her health struggles. She founded the Facebook page, Norwalk Parents for Education in 2014, and it swiftly became an agent to organize parents and outline issues. There are currently 4,700 members to the closed page.

Meyer-Mitchell is currently on the Bike Walk Commission’s Pedestrian Committee.

She said she’s not going away.

“You can expect me to continue to be a strong voice for equity in resources, transparency, fiscal accountability and excellence in Norwalk Public Schools,” she wrote.

“It will be hard to replace someone as passionate and dedicated as Barbara,” Democratic Town Committee Chairwoman Eloisa Melendez wrote. “Her institutional knowledge both as a parent and advocate made her an invaluable member of the board. I’m thankful for her years of service and I hope her message of kindness continues to inspire our community.”

Meyer-Mitchell did not attend Thursday’s Finance Committee meeting, which Hosten called a “major absence.” He said, “We certainly felt her loss here tonight, and will continue to feel as on the Board with immense gratitude for the selfless work that she’s been doing over many years, but also a great deal of respect and support for the choices that she’s making now.” 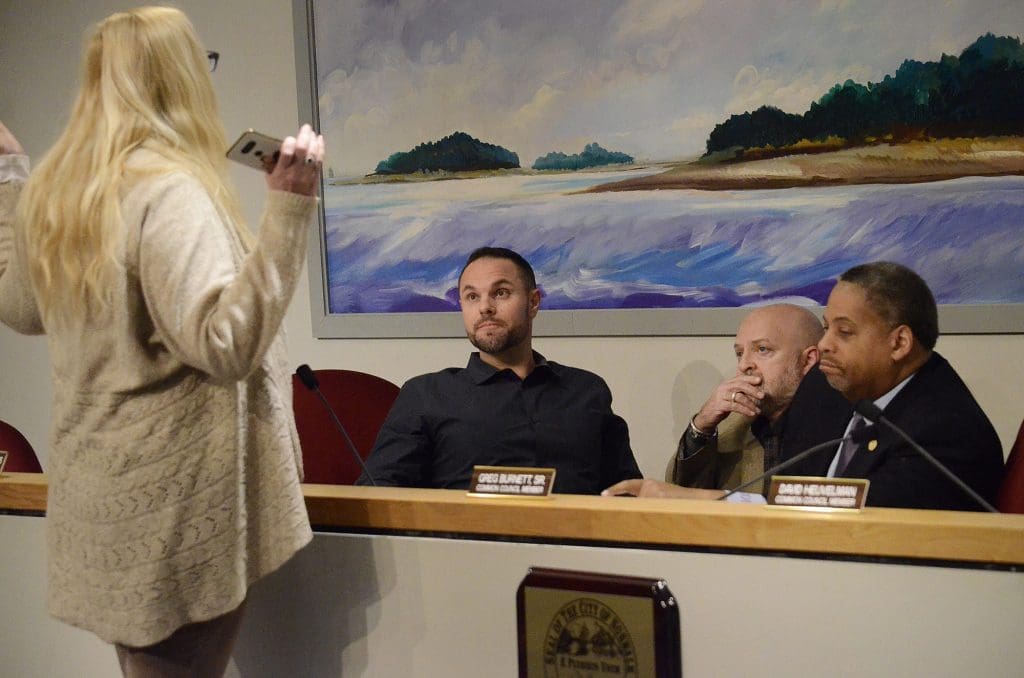 So now we have an open seat on the BOE and Mike Barbis still without a committee assignment. The leadership is where exactly?! It’s time for Colin to STEP UP and act like he cares and get this board straightened out now!

Wow Nancy, nice unsubstantiated statements as usual. Maybe you should try to hunt down what really happened here! But we know how you pick and choose who and how you cover.

One of the DNC’s Better people. The Party left her. Smart caring woman but why does she let them set the narrative?

I don’t know Barbara well except hearing her speak at Planning Commission’s public hearings. While I was hospitalized with Covid, she sent me a most gracious card of encouragement. Barbara – Thank you for your service and unwavering advocacy for Norwalk’s student body. Be well.

I know that Mike Barbis has been controversial, but there are few honest people who would question his knowledge of the district and of Norwalk Board of Education issues. He surely was in the thick of a great deal of criticism last spring, but I think his removal from any committee assignments is very short-sighted because his institutional memory can be of great value.

Going forward, if Mike says or does anything that is perceived to be objectionable, I hope that he is challenged, but that he is also given an opportunity to explain himself before anyone passes final judgment. Meanwhile, it’s time to give him the opportunity to demonstrate again that he has knowledge that can inform the thinking of the rest of the BOE and of the superintendent.

Kudos to Barbara. Thanks for your service.

@JF. Don’t be surprised. Our townie Ds are Ds in name only. Lord knows what motivates them, but it clearly isn’t without self interests involved.