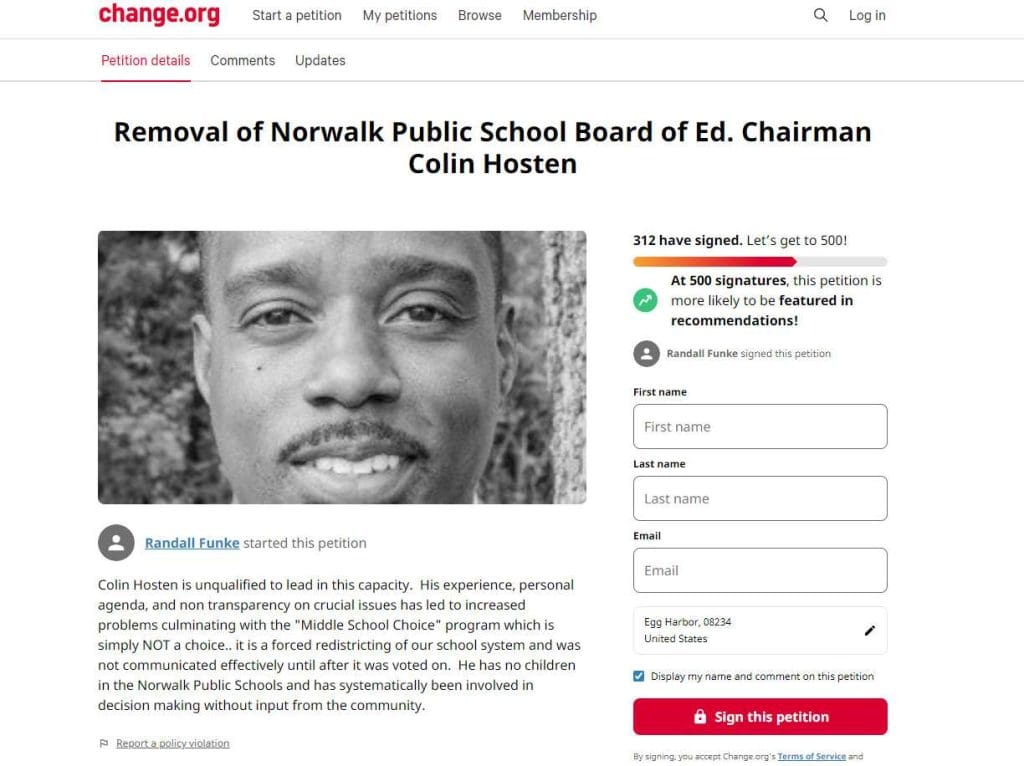 Screengrab of a petition posted Monday.

NORWALK, Conn. — A petition to “remove” Norwalk Board of Education Chairman Colin Hosten. A call for a protest at City Hall.

Both are inspired by a school district move toward Middle School Choice. An announcement sent Friday to fifth grade students’ families inspired angry comments on the Facebook page Norwalk Parents for Education and a Monday post on the NPS Facebook page generated a similar response.

“Please don’t disguise this terrible plan with the word ‘choice’. You are not giving us the choice to actually do what is best for our children and are jeopardizing their mental well-being in the process,” Katherine Stuart-Funke wrote. 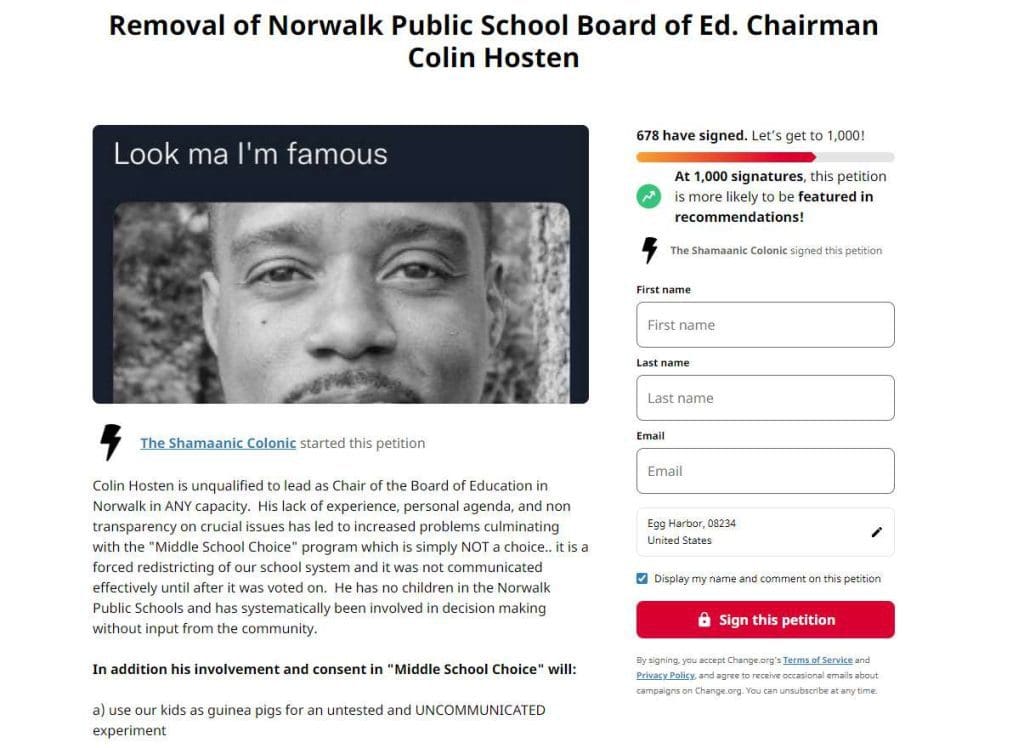 The petition at about 2 p.m. Tuesday. Norwalk Board of Education Chairman Colin Hosten had reportedly Tweeted a link to the petition, with the words “Look ma, I’m famous,” and then deleted the Tweet. 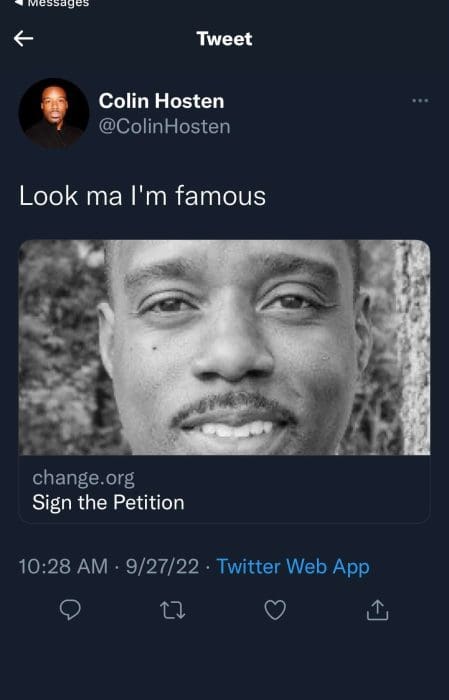 Nora King provided this screenshot of a Tweet from Norwalk Board of Education Chairman Colin Hosten, saying it’s “another example of Colin thinking educating our kids is not important and he treats it like a joke. This is not funny and as Chair he should have more respect for how parents are feeling . They are not scholars but children who need to be educated.

School “choice” has been a topic for years. In January 2019, then- Board of Education Chairman Mike Lyons said Norwalk was moving toward a choice model, and as the model evolves students could choose which schools they want to attend.

Middle School Choice, the next step in the moving toward that model, was approved at the March 15 Board of Education meeting, which also featured a vote on plans for the new Norwalk High School and a student presentation about gender neutral bathrooms. The vote on Middle School Choice was fast, with Hosten commenting that it had been discussed thoroughly two weeks earlier.

Norwalk Superintendent of Schools Alexandra Estrella began the March 1 commentary by noting all the progress NPS has made in developing pathways and said it was important that Norwalk’s diverse families be informed of the options. The administration is thinking of it as part of a continuum, with developmental opportunities at the middle and elementary school levels building to the high school choices, she said.

Then-Chief of Staff and Communications Brenda Wilcox Williams noted that Goal Six in the Board’s latest Strategic Operating Plan, approved in 2021, is “We will ensure families are provided with equitable opportunities to access district resources and programs.”

A central lottery system had been developed and kicked off at the High School Choice fair, she said.

“You can see in the pathway structure that we’re trying to develop, we’re really enhancing the rigor across the district, in terms of the different programming choices that we have for our students,” Estrella said. 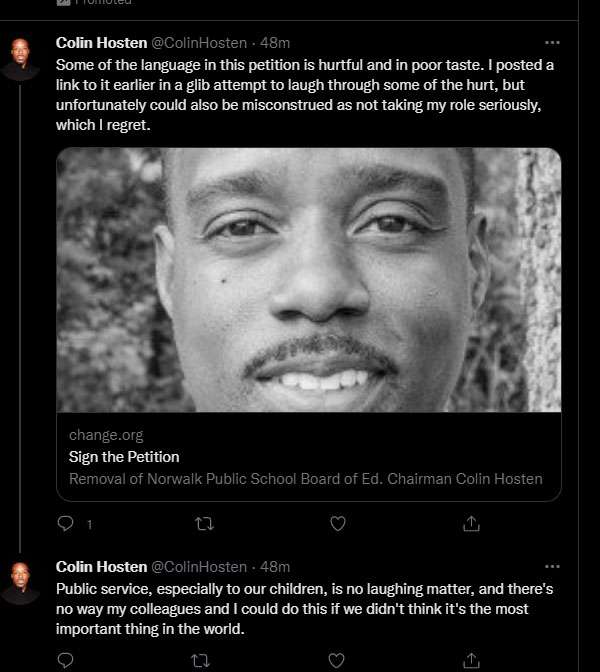 A Tweet issued by Norwalk Board of Education Chairman Colin Hosten at about 2 p.m. Tuesday.

NPS Transportation Coordinator Johanna Zanvettor said she’d been given different models to base her bus evaluation studies on, the possibility that 5% to 20% of students would opt into Middle School Choice.

Elementary and high school students already have some choice, she said. “Now we’re just connecting the dots, right, we’re being able to give those that those middle school families an option to choose and be able to provide transportation for them as well.”

“I think it’s one of those things that will continue to distinguish Norwork as a district, not just compared to our DRG (District Reference Group) groups, but just as a district in Connecticut,” he said.

“We’ll see over these next few years how the programs grow. Transportation is always a work in progress as needed by the community. So as long as we are, you know, the lotteries occur early on in the year, we have time to plan,” Zanvettor said.

“For so long, the narrative has been about giving parents a choice about how their kids learn and what school they go to, however, folks probably didn’t anticipate the challenging challenge is that it presents as well, transportation,” BoE member Sheri McCready Brown said.

It passed unanimously. Some parents now say there was no public hearing.

Some complain that Board of Education meetings are online instead of in person, though more than half of this year’s Board’s standard meetings have been hybrids, meaning some members are there in person and some attend remotely. Citizens can attend and offer comments in person, although for workshop meetings they must be on one of the topics presented. (The Board has also held three retreat sessions. They’re open to the public but in person only and there are no videos on the NPS YouTube channel.) 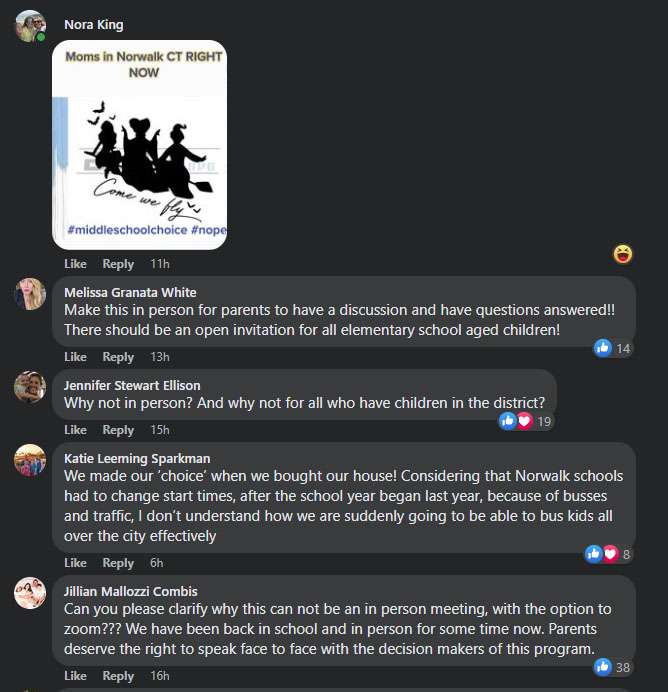 Social media posts indicate widespread frustration that the Tuesday online town hall NPS advertised for parents to ask about Middle School Choice was only for fifth grade families. No Zoom link had been published for the general public.

“We have been back in school and in person for some time now. Parents deserve the right to speak face to face with the decision makers of this program,” Jillian Mallozzi Combis said on the NPS Facebook page.

It’s online only because “no one wants to face angry parents,” Jessica Garnet wrote.

On Tuesday, NPS rescheduled the town hall to Oct. 3, indicating it would be held in person.

Drew Todd was among those urging parents to protest Tuesday evening at City Hall.

“We want the opportunity to speak in-person regarding the middle school lottery choice which eliminates our children being guaranteed their neighborhood school in a critical growth period of their life,” he wrote Monday on NancyOnNorwalk.

The protest was also advertised on the parents’ Facebook page, where the Middle School Choice post had generated 217 comments Monday evening. Parents were asked to bring their kids to City Hall at 6 p.m. with homemade signs and demand an in-person meeting. Organizers hope for 100 protestors, “to make a statement that we are tired of being ignored and muted on ZOOM.”

There is no State law that would allow Board of Education members to remove another member. In 2019, NAACP members and supporters futilely called for the late Mike Barbis to resign. Leaders Brenda Penn-Williams and Scot Esdaile said it “strained credulity” that he had to be told to resign, that there was no mechanism for his removal. 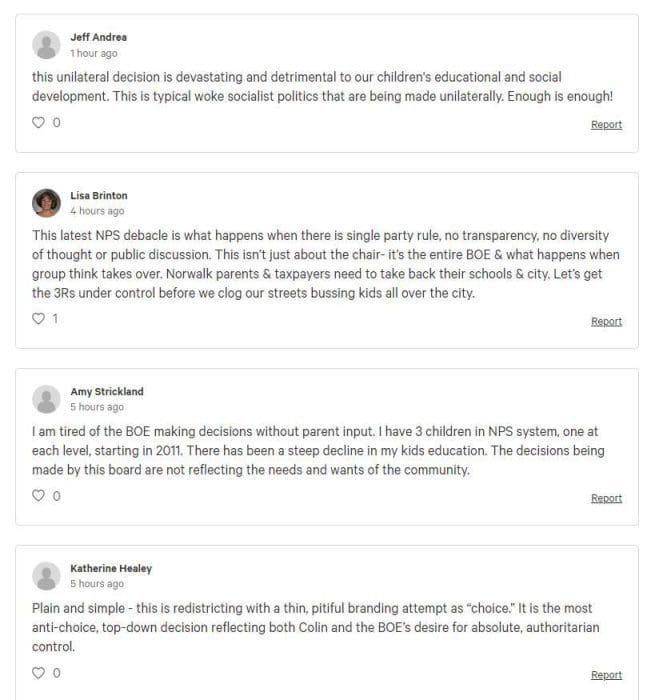 Comments left by signers of the petition.

“Colin Hosten is unqualified to lead in this capacity,” Funke’s petition states. “His experience, personal agenda, and non transparency on crucial issues has led to increased problems culminating with the ‘Middle School Choice’ program which is simply NOT a choice.. it is a forced redistricting of our school system and was not communicated effectively until after it was voted on.  He has no children in the Norwalk Public Schools and has systematically been involved in decision making without input from the community.”

Hosten did not reply to an email giving him a chance to respond. On Tuesday afternoon, he issued a Tweet, saying, “Some of the language in this petition is hurtful and in poor taste.”

Funke, Monday on the NPS Facebook page, alleged that the March 1 BoE meeting was deliberately vague.

“It was not at all clear from this Workshop presentation that families would not have an opt out option (other than to rank your neighborhood school as your first choice and pray you get it). It was specifically discussed that they only anticipated 20% ‘opt-in’ to middle school choice the first year,” he wrote. “So why are all 5th grade families being required to enter a lottery and rank 10 programs in order from first to last choice? The transition to middle school is stressful enough for students and families without throwing this curveball at us…” 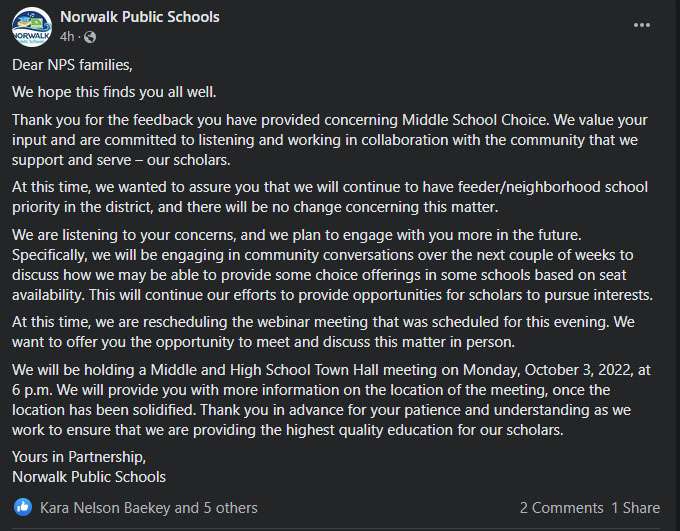 I just want to point out that this is fundamentally a story about legitimacy. The elected officials were surely elected, but somehow, people don’t regard them or their decisions as legitimate.

And I just want anyone reading this to ask themselves one question: WHY?

WHY don’t you see this decision as legitimate? Did you not vote? Are you one of Norwalk’s many perennially-disgruntled Republicans?

I mean, come on, guys. The basic social contract of a representative democracy is that we delegate important decisions to elected officials. If there’s something wrong with that contract, let’s fix it. For instance, even though the officials have been talking up this “choice” plan for years now, all of a sudden people are shocked. Again… WHY? Is it that our local media and government don’t communicate these plans well? Is it that we ignore their communication? _I_ certainly don’t remember any council or school board members running on choice last year, and I’m a relatively well-informed voter!

Maybe it’s all of the above. But in this humble voter’s opinion, I think we should really focus on asking WHY we’re so upset with our “republican” (small-r) government, instead of obsessing about how upset we ARE.

Thank you for posting this important article. The petition is up to 667 people now. The BOE has effectively backtracked on some of the major points, and there’s still work to be done. The petition still stands true will remain active as . a reminder that we as a community will scrutinize your actions if we find them to be corrupt or unjust.

The vilification of Colin Hosten is offensive, and there’s a correction to the report from the BoE that should stand.

Every student will still be guaranteed a place in their local middle school. As Colin says, families who choose to apply to other schools will have transportation covered.

I’m glad to see the Town Hall scheduled for October 3rd so that the truth can be clarified and questions answered.

School Choice which is being referred to in this article with Mike Lyons was letting parents all over Norwalk if there were openings in that district to apply to that school. That was how Choice started and that was what it was meant to be. It wasn’t let’s do the 70’s bussing that is being proposed in disguise of the Choice Program Estrella is pushing under the leadership of Colin Hosten. The absurdity of this program is thinking kids at the age of 10 know what their pathways are. The entire program is a joke. My daughter thinks her path right now is being a dancer and or professional babysitter. Now her path from her mother (which would be me) is that I would like her to know her multiplication tables and be at grade level math or how about being above grade level which under the leadership of Mike Lyons and Mike Barbis that was a goal for kids. If Collin and Estrella remain in charge the only dancer my daughter will end up being is a pole dancer based on the lack of education NPS is providing right now. These two people took our award-winning schools ( and yes – they used to be Schools of Excellence) to subpar schools that are below national levels in reading and math. Get your act together NPS and focus on the fundamentals of learning. How about firing some of those top-heavy administrators and hiring qualified teachers in math? Also, can you focus on getting a calculus teacher at BMHS for the seniors who are now being taught on recorded videos?

Colin, a large portion of the community has expressed they are not pleased with you and the BOE as a whole, and your response is to mock us on Twitter?

That’s unprofessional. Vote him out.