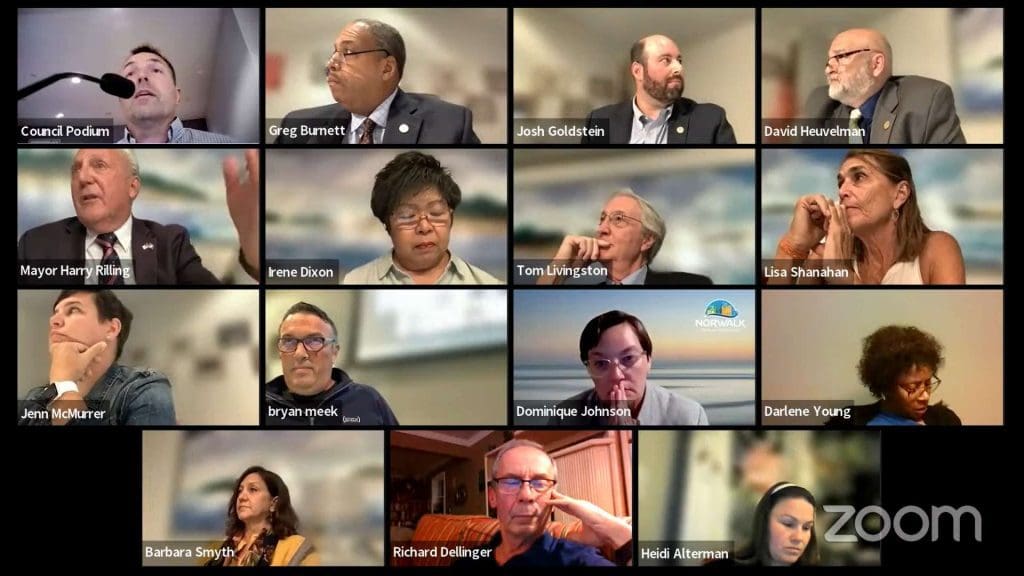 NORWALK, Conn. —  The “POKO lawsuit” made it to the Norwalk Common Council’s main stage Tuesday, even if it wasn’t on the Council meeting agenda.

Mayor Harry Rilling ruled real estate broker Jason Milligan out of order and suggested he would have security called to remove Milligan from the Council chambers.

Most Norwalk meetings, including those held by the Council, allow citizens to speak for three minutes on a topic that is on the agenda. Milligan had claimed he wanted to talk about an agenda item, “Corporation Counsel,” otherwise called the City’s legal department. “Corporation Counsel” is listed on the agenda for every meeting as a header under which there might be an item, such as a legal settlement for the Council to discuss or vote on. There were no items listed Tuesday.

Milligan is being sued by the City and the Norwalk Redevelopment Agency, accused of unfair trade practices and “sham” real estate transfers in his 2018 purchase of properties slated to become parts of Wall Street Place phases II and III, often referred to as “POKO.” The case is slated for mediation in early October, with a trial possible next year.

Milligan could have paid just under $2 million to end the lawsuit in March 2020 but turned down that offer of compromise. When the plaintiffs recently told him he could end the lawsuit and others he’s involved in by paying $4.5 million, Milligan declined, counteroffering to sell the Leonard Street lot back to the City for $3.5 million.  He said he’d not be profiting from the sale, and wanted his counteroffer on the agenda for public discussion Tuesday.

“That effort was blocked,” Milligan said in an email to NancyOnNorwalk. “It is too bad that the council & public are prevented from being involved with such important matters. It is as if this City is secretly run by a part time lawyer. One that is burning his candle at both ends while he successfully blocks developers from building in Greenwich. Meanwhile the same developers are welcome to continue ripping off Norwalk.”

Milligan’s offer is a suggestion that the City buy the Leonard Street lot back from him at a cost of $3.5 million. He would not make a profit from the sale, he explains.

Milligan, a New Canaan resident, began his remarks Tuesday by giving his address as 11 Belden Ave., the Norwalk location of his real estate office. “I have been sued,” he said.

Told by Rilling that he needed to sit down, Milligan said he wanted to talk about the cannabis ordinance that was on the agenda. Rilling gave him three minutes.

Milligan spoke for 20 seconds without mentioning marijuana. “I believe that topics can take a different angle than you might expect. Are you going to tightly control every aspect of everyone’s speech up here?” he said.

Rilling told him to talk about marijuana and began the three-minute clock again.

“I’ve been muzzled. I’ve been censored. And when I tried to talk, here’s a perfect example. I could have had three minutes would have been done,” Milligan said.

Rilling said the Council rules exist to keep people from talking for hours on off-topics; the Council voted to recess. When the meeting resumed, Rilling called upon Donna Smirniotopoulos to speak, but Milligan remained at the lectern.

“I came here with great intentions. I was talking to the council. I have nothing but respect for everyone on this council,” Milligan argued, and Rilling again told him he was out of order.

Milligan asked Livingston if he was afraid of him and finally gave the microphone to Smirniotopoulos.

She said she knew they would vote in favor of their ordinance making retail cannabis establishments legal in Norwalk and spelling out related items, but she had a suggestion for any revenue that came in from the State legalizing marijuana.

She said, “You need it to help pay for litigation. You have many outstanding bills from ongoing lawsuits that go back as far as 2018.”

Rilling on Wednesday said he did call a security guard, who asked Milligan to sit down as the meeting continued.

4 people signed up to speak.

Each were allowed 3 minutes.

I spoke calmly and respectfully, but was interrupted almost immediately.

Harry wasted 15 minutes arguing, taking a recess and calling security rather than let me speak for 3 minutes. What could I possibly have said in 3 minutes that was so terrifying?

There was no danger of someone rambling on for hours about random topics.

I was repeatedly thrown off my train of thought by Harry constantly interrupting me.

I had plenty of things to say about Marijuana. I could barely think straight with all of the interruptions.

I have been to many meeting were people get up to speak without a 100% clear plan and sometimes they meander. That is their right!

It is my right.

He’s mildly off topic and they threaten him and call a recess? Out of control. Between this bogus Zoom nonsense and using parliamentary tactics to keep everything under wraps…shame.

Unfortunately it seems the politicians have one motivation to make 3% tax revenue and money and greed has blinded the eyes they don’t care about all the mental health ramifications that we will be facing as a town as a state as a country just gas people in Colorado 🙈 let’s not be idiots one young person who’s got to be hospitalized for six months for mental health issues is going to cost the $250,000!🥵👎🏽 we support decriminalization but not legalization without educating the young people we need to create work farms where we’re gonna have to send all the drug attic‘s😩 otherwise our streets are going to look like San Francisco, LA and Portland and all these other ruined crime ridden ones beautiful American cities now full of homeless, tents, trash and drugs everywhere you’ll see🙈🦔🇺🇸

Rilling – “people could just come in here and talk about anything for hours and hours”. Absolute nonsense. When has that happened?

What we can’t have happen is people talking about inconvenient truths. Harry is exceedingly skittish about any topic that exposes his failures. POKO is now HIS failure.

This mayor is an embarrassment. His need for absolute control is a real window into his insecurity. That Livingston pushes for a recess was a smart move – it allows Harry time to compose himself – can’t have him losing his fake composure on zoom for all of Norwalk to watch. The great and powerful OZ used a curtain.

Legal mercenary Coppola fights development on behalf of the town of Greenwich, expected, but then assists those very developers to max-out density in Norwalk? Are we good with the hypocrisy? Whatever pays, right? Oh, except we don’t help those Norwalk developers who are not “friends of Rilling”. Lots of lawyers gave $1000 – maybe that’s the deal – they want to keep the billing hours & fee’s rolling on, and on, and on. POKO – how many years? How can this guy say he cares about Wall Street?

Here is a fact: Jason Milligan will be doing business in Norwalk – successfully – long after Harry and Mario are gone. The common council should stand up to the emperor – prove for one second it is in fact a “strong council weak mayor” system – and push for a resolution to the singular impediment that blocks our city center from improvement. Right now – every council member should realize how weak and feckless they appear. Silence equals complicit.

With comments like “Are you scared to let me speak” as well as standing at the podium like a scalded baby, did you really think anyone in their right mind would really let you have 3 minutes to hijack a meeting Mr.Milligan? Well besides Mr. Meek who had his popcorn ready right after he left the backdoor open for you I’m guessing. Whether you think you are right or wrong there is a professional way of conducting yourself in a public forum and you have failed in every single aspect of this at all times the spotlight has been on you. To think that the common council would rather hear ,nay, DEMAND to hear from Mrs. Smirolopous speaks volumes of where you have fallen on the totem pole in the city. Yikes.

Funny watching the mayor get all antsy and not knowing how to handle the opposition. Give the man a chance to speak Mr Mayor. Or is it because you just handed over 3.5 million of our tax dollars to him for a parking lot!

Good to hear from you.

How exactly does a scalded baby stand?

@Jason Milligan, Propped up by a podium apparently. Well done