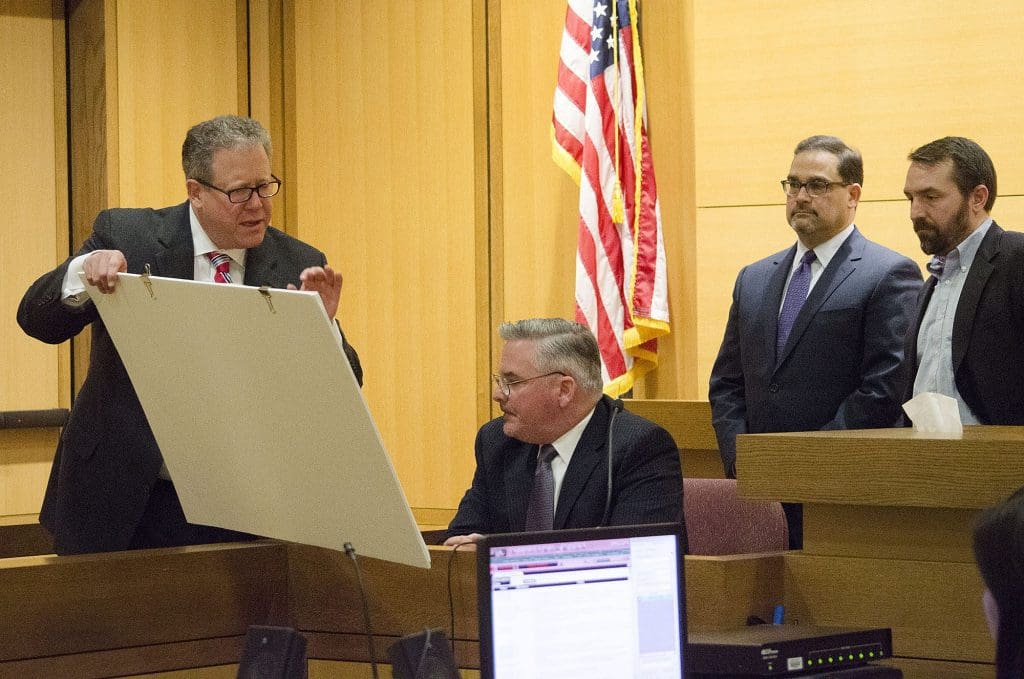 “It’s amazing what you can learn in litigation. The truth has a way to work its way to the surface,” Milligan said Thursday evening to Common Council Planning Committee members, revealing that there is no valid redevelopment plan for the Wall Street area.

Redevelopment Agency Executive Director Tim Sheehan testified in Stamford Superior Court on Thursday afternoon that the 2014 Wall Street Redevelopment Plan has expired. Milligan said this means that Redevelopment will have to start completely over in its determination of the area as qualifying for a redevelopment plan.

Despite this assertion and some related threats, the Council Planning Committee voted to move the Wall Street – West Avenue Redevelopment Plan to the full Council for approval.

Sheehan’s admission that the 2014 plan has expired ended hours and hours of his time in the witness chair, testimony that began in December. Rubin has pressed for answers on topics such as the “unity of interest,” the “right of reentry” and the “right of first refusal,” in questioning that has drawn many objections from Attorneys Joseph Williams and Andrea Gomes, representing the Redevelopment Agency, accusing him of being argumentative or questioning the relevance of the inquiries. Sheehan parcels out information in bits, and his testimony has been set aside several times to make room for other witnesses.

Rubin has asked several times about the 2014 Wall Street Redevelopment Plan, and Planning and Zoning Director Steven Kleppin said Wednesday that he thought it was expired. On Thursday, Rubin told Sheehan that he thought Sheehan had testified that he thought the redevelopment plan had been given an extension, but he would have to look up documents.

“The legislative body needs to uphold the plan. That’s what the statute requires,” Sheehan said.

“We asked for an extension of the existing plan, for a specific period in time,” Sheehan said.

Sheehan subsequently said the plan had expired in June. Rubin ended his questioning.

Redirect was very brief; Williams asked, “Had the agency begun a new process of acquiring a new plan prior to June 30, 2018?”

The answer was yes. That was it.

The Council in March 2015 renewed the 2004 Wall Street Redevelopment Area’s designation to qualify for United States Housing and Urban Development (HUD) funding, with controversy at that time revolving around the word “slum” in its description of the area.

The plan had lapsed before being renewed, meaning, it was expired at the time.

Redevelopment had been using the word “blight” to justify the proposed Wall Street – West Avenue Redevelopment Plan but changed the emphasis to “deteriorated or deteriorating,” as the criteria used to qualify the area for a redevelopment plan.

Milligan and members of the Wall Street Neighborhood Association have been telling Council members that those criteria are unjustified.

“To come in here anew and say this area is a slum, is probably crazy and it’s probably fraud,” Milligan said Thursday evening. “I can tell you this: there are more than one person that is gathering a report to bring to the FBI, because if you benefit financially from lying or misstatements, which we would do if we are saying this is blighted so we can get the money, the taxpayer money – that’s fraud. Now, can it be proven? I don’t know. But you are all culpable because now you have been put on notice, not only by me, by attorneys, and there will be more coming.”

He continued, “You have been warned, those of you on the Ordinance Committee, that a lawsuit is coming. You know what it is doing to say this is a blighted area.”

Committee members did not respond to these allegations and did not discuss them before voting on the plan.

Milligan and Rubin attempted to question the blight designation in court Thursday, by having Norwalk Chief Building Official Bill Ireland in as a witness, as Ireland is the City’s Blight Enforcement Officer. The line of questioning fizzled when Ireland said he didn’t know anything about the Redevelopment Plan.

“What Chapter 130 section 8-125 does, it defines deteriorated or deteriorating with respect to a redevelopment area,” Lee said.

Rubin said he disagreed, and Lee said, “It’s ‘deteriorated or deteriorating,’ is the standard for the urban renewal area. It’s not ‘blight.’ Blight is the blight ordinance, which Mr. Ireland deals with, but they are two different sections and two different standards.”

“The renewal agency does determine whether it’s deteriorated or deteriorating,” Lee said.

“We would argue that the ‘deteriorated and deteriorating’ and ‘blight’ are synonymous,” Rubin eventually said.

Ireland’s testimony ended a short while later; the case is set to resume on March 14.

City leaders have repeatedly explained in the past that they don’t like designating an area as blighted or a slum.

“That’s one of the little bureaucratic things you have to put up with, I’m afraid, the definitional issues,” former Mayor Bill Collins, said in 2015.  “So you do what you have to do to meet their requirements.”

“To use that label is really offensive,” Mayor Harry Rilling said in May 2015. “Unfortunately, it’s what the state of Connecticut and HUD requires in order to get those monies in.”

CT Statue Chapter 130
Definitions
“Deteriorated” or “deteriorating” with respect to a redevelopment area means an area within which at least twenty per cent of the buildings contain one or more building deficiencies or environmental deficiencies, including, but not limited to: (A) Defects that warrant clearance (What the hell does this mean?); (B) conditions from a defect that are not correctable by normal maintenance; (C) extensive minor defects that collectively have a negative effect on the surrounding area; (D) inadequate original construction or subsequent alterations; (E) inadequate or unsafe plumbing, heating or electrical facilities; (F) overcrowding or improper location of structures on land; (G) excessive density of dwelling units; (H) conversion of incompatible types of uses, such as conversion of a structure located near family dwelling units to rooming houses; (I) obsolete building types, such as large residences or other buildings which because of lack of use or maintenance have a blighting influence; (J) detrimental land uses or conditions, such as incompatible uses, structures in mixed use, or adverse influences from noise, smoke or fumes; (K) unsafe, congested, poorly designed, or otherwise deficient streets; (L) inadequate public utilities or community facilities that contribute to unsatisfactory living conditions or economic decline; or (M) other equally significant building deficiencies or environmental deficiencies.

That definition above is the exact standard used to create the “Blight Ordinance” in 2016 that empowered Bill Ireland to be the SOLE BLIGHT ENFORCEMENT OFFICER for our city.

Using the standards and definitions in the state statute our BLIGHT ENFORCEMENT OFFICER has found exactly 3 instances of “BLIGHT” in the proposed new plan area!!!

2 of the instances of blight are POKO related, Phase I & the El Dorado Club. Both caused by the Redevlopment Agency that is trying remain in power to fix the problems they created. The only real blight is a porch on the congregational church annex building that has a plan to be fixed.

Did the Redevelopment Agency rely on our Blight Enforcement Officer to help determine blight in the area?
Did they consult with him in the slightest?

Of course not! Bill Ireland is to honorable to lie to get the money.

Instead Steve Cecil formerly of the Cecil Group, located in Boston was tapped to provide the requisite findings. The same guy that made a fortune consulting for the POKO project.

Was he paid for this work? How much? Who authorized it?

RPA Regional Plan Associates were the consultant used to create the proposed new Redevelopment Plan. They made the original blight findings. The blight findings were highly questioned. RDA got approval to extend the contract with RPA Consultants and $25K was appropriated. Their contract was never extended. RPA did not double down on the highly questioned “Blight Findings” that found 185 blighted properties in the same area that our Blight Enforcement Officer has found 3.

Steve Cecil to the rescue! Does Steve Cecil possess the education, knowledge or authority to make the determination that he did? NO!

It has been suggested that Tami Strauss of the RDA did all of the leg work with the tax records for the alternative finding of Blight and then laundered it through Harriman Group (Steve Cecil) to give the appearance of propriety and 3rd party impartiality.

She was seen spending lots of time in the tax assessors office.

This fight is long from over and we will get to the truth.

Strict compliance with procedure set out by statute is necessary in order to validly adopt a redevelopment plan; plan not valid since it was not first submitted to planning commission and no meeting or hearing on it was ever held. 148 C. 517. General Assembly has delegated to the agency power to prepare a redevelopment plan within prescribed limits; such AUTHORITY having been reposed IN THE AGENCY, its decision is conclusive UNLESS, ON JUDICIAL REVIEW, IT IS FOUND TO BE unreasonable, or THE RESULT OF BAD FAITH, or an abuse of power conferred.

The LAW is the LAW and it will be tested if this plan attempts to continue!
The Agency has the authority to determine a Redevelopment Area provided Strict compliance with procedure set out by statute and there be no Bad Faith or abuse of power.

Judicial Review will likely determine this given the council’s willingness to blow passed all opposition and warning signals.

When you dig into this you will realize that Jason is correct. As a expert in this area, as recognized by both state and federal courts, I don’t agree with Judge Lee’s opinion. The definitions are clear, as are the statutes and thresholds that need to be meet.

The methods of measuring deprecation are clear as well. I spoke with Steve Cecil the other night and asked him to support his premise of deterioration and that a 30% level of depreciation effectively tags a building as “undesirable”. Which by the way is the sole criteria used to claim this area as a redevelopment plan area. I asked Steve Cecil for specific citations and professional sources – he could not. Why? because there are none.

The premise of blight or deterioration are false. To have the sole arbiter of this designation be the Redevelopment Agency is like given the keys to the bar to an acholic and saying, “turn the lights off and lock up when your done”.

One of the main reasons Norwalk always seem to lag behind is due to shenanigans like this. What business wants to open here when they get treated so poorly.

It was the lawsuit that that revealed the Redevelopment Plan for Wall st is expired. It expired in 2014. It was extended for 4 years to June 2018. It has been expired since last June.

Tim Sheehan did not immediately reveal that the plan was expired. He claimed not to know, but he was instructed to return the next day with that information. Tim’s final day under oath on the witness stand ended with the Tim revealing that the Wall Street Redevelopment Plan was in fact expired!!

It’s unbelievable the city wants to restart an illl conceived project concept that actually failed . Ironically, Mr. Milligan woke up the city. How in the world could they reconsider starting the same project with the same developer. The solution is get rid of the original players and hear new ideas from people that actually care. Unlike the prior developer Mr. Milligan actually made a substantial investment. He has “skin in the game “. Instead he is chastised because he hurt their feelings or did he disrupt their clandestine plans. Perhaps the city’s actions and historic willful inaction to prosecute the bad players should be investigated by federal authorities.

Holy coverup Batman! What else is City Hall hiding around the City? Did the same happen at 95/7?