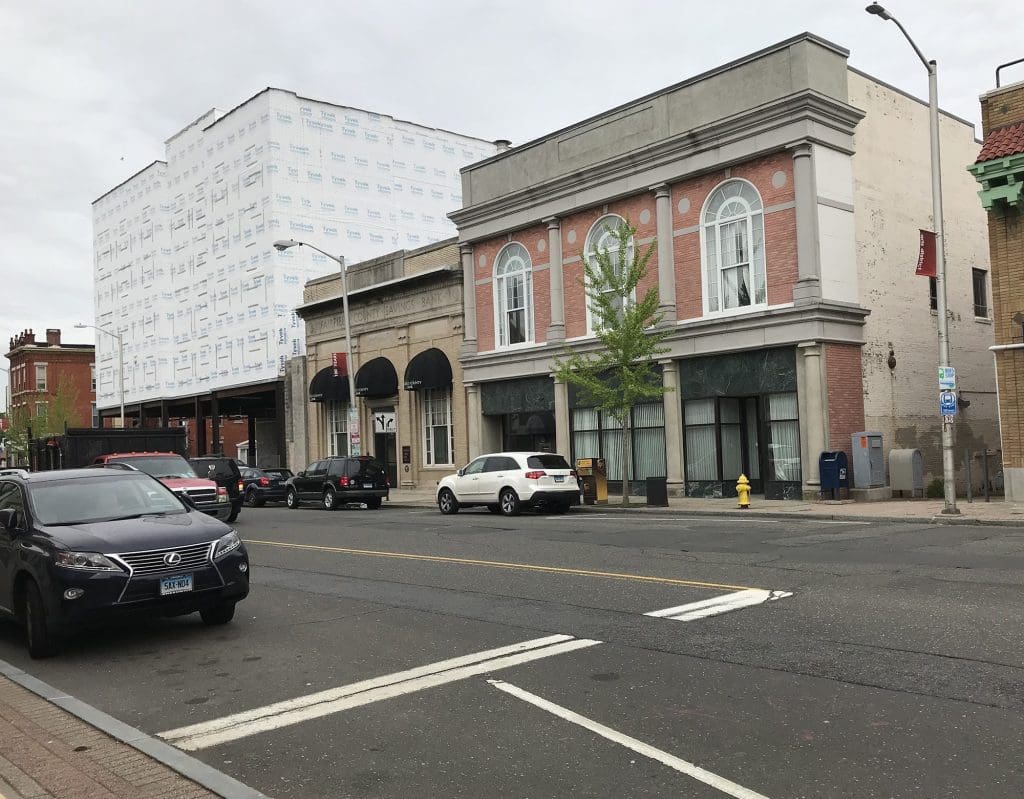 The Fairfield County Bank buildings in May. (File photo)

Milligan, under IJ Group LLC, closed on the purchase of the Bank buildings even though he was turned down on the Zoning changes he had requested as a condition of the sale.

Milligan said in June that he owns 20 properties in the Wall Street area. He is embroiled in a legal dispute with the City and the Norwalk Redevelopment Agency due to his purchase of Wall Street and Isaac Street properties that were slated to be used for “POKO” phases II and III. The bank buildings abut the stalled Wall Street Place development, called “POKO” by many and the “Tyvek Temple” by some.

“I am ready, willing and able to invest into the Wall Street area,” Milligan wrote Wednesday to Redevelopment Agency Executive Director Tim Sheehan and Norwalk Corporation Counsel Mario Coppola. “I just paid cash yesterday to purchase both Fairfield County Bank Buildings at 67 and 69 Wall Street. In the last six months I have invested almost $7.5 million into the Wall Street area.”

The lawsuit accuses Milligan of unfair trade practices due to deals made by “sham” companies.

IJ Group LLC was formed in 2014 and is managed by Milligan, according to the Secretary of State’s website.  IJ Group LLC bought 38 Orchard St. in August 2014 for $167,750 then sold it to 38 O LLC in December 2014 for $500,000, according to the City’s website.  Belpointe Capital manages 38 O LLC.  Belpointe is the developer of the Waypointe complex, which includes Quincy Lofts at 30 Orchard St.

IJ Group has one other property listed on the tax rolls: it bought 37 North Ave., an office building, for $2.2 million in January 2015.

Milligan in May said he could “as of right” build apartments on the Fairfield County Bank properties but was requesting that Zoning relieve him of the requirements to have onsite parking and amenities in the building. Fairfield County Bank would remain, but in half of the space it currently occupies, because it’s the 21st century and less space is needed, Milligan said.

Zoning turned him down on the requested Zoning changes, he said recently.

“Right now we are creating a new modern branch for the bank in the front of 69 Wall Street,” he wrote. “In the meantime I am cleaning up the space to try to attract potential tenants.” 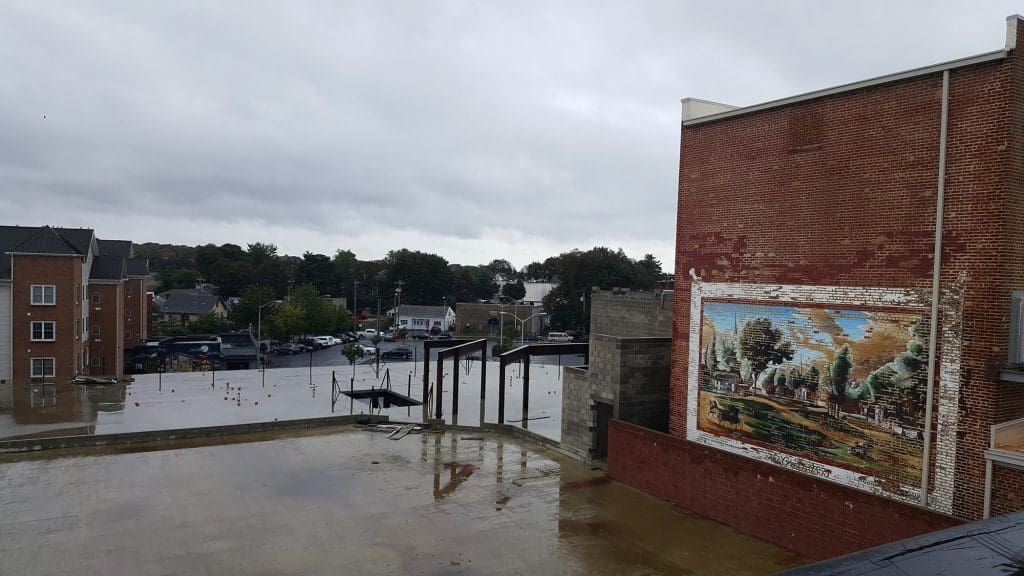 A view from the Fairfield County Bank in October. (Jason Milligan)

Jason thank you for investing in wall street. However, please no more apartments we have way too many now. Leave some historical charm to wall street versus these ugly monstrosities of apartment buildings we keep getting.

There is broad consensus that the Wall St area should maintain its quaint historical charm. I have absolutely no intent or desire to construct enormous apartment buildings there.

Norwalk also has a shortage of no-frills small and financially affordable apartments. I have every intention to adapt some of these buildings into apartments and add some floors where appropriate. Think SONO.

However, before I do this we need to tweak the zoning regulations which is currently underway. Sometime soon we should also be allowed to allow lovely young ambitious dentists to open on the 1st floor in the Wall St area.

BTW, POKO never was designed to be in keeping with the Wall St area. It is not in keeping with the design standards in the 2004 Redevelopment plan, and while it has been painful to look at the Tyvek Temple it is a blessing that the project has failed so miserably. Wall St would have been forever changed for the worse.

Now we get another chance to get it right.

Please reach out to me if would like. I want to know all of the people that have strong opinions in Norwalk.

how do we get to speak with Jason and perhaps form a group to help him.
the only brain in this deteriorating city.
thank you for your desire to make wall street and norwalk better. buy as many properties as you can.

The as of right 9 apartments were denied by zoning. A few months ago I met with zoning directors Steve Kleppin, Aline Rochefort, & Mike Wrinn along with my attorney and architect. We explained how the project should be as of right, and that it should just be an over the counter permit.

They saw it differently. They tortured the regs and used residential standards to find a way to say no.

The disagreement was over the 3rd story. Currently there is an attic that is an attic that is sparingly used and they don’t have good records about it. The zone currently only allows for a 2.0 FAR (Floor Area Ratio) The 3rd story would put the building at almost 3.0. We argued that it was legally non-conforming and that the project was perfect for the area. Its size, scope, scale, design etc all were in line with what everyone wants. Common sense be damned!

It is another example of how hard it is to make small incremental improvements that are in line with what the people of this city want.

If I wanted to rip down the bank buildings and put up a 6 story government sponsored “affordable Housing” project the red carpet would have been rolled out.

Jason Milligan owns 20 properties in the Wall Street area, that’s a lot of properties. This is the first time I’ve heard this.

How long have you own these?

And why does the area still look depressed?

Are you looking for a handout from the City? The very thing you and others on these comment pages accuse others of doing?

Where are the “Free Market Capitalist” on this revelation?

20 properties, remember that good citizens of Norwalk next time you start bashing the City for not investing in this area.

I have acquired 8 properties on or right near Wall St in the past 6 months or so. I also own property on Belden Ave, High St, East Ave, North Ave, Mott Ave, Berkeley St, Elm St, Harbor Ave, Main St etc.

I have invested over $600,000 into improving the properties since acquisition. I had 3 murals painted. The large parking lot between Isaac & Leonard St was cleaned up from rotten construction materials, overgrown trees & weeds, and the chain link fence blocking 60-70% of the parking lot was removed. The parking lot was sealed and striped. New LED lighting was installed.

Instead of drunk homeless people living in abandoned cars and under overgrown trees amid broken glass, old tires etc. there now exists a clean, bright and inviting parking lot available to the public.

In my buildings in the past 6 months I have brought Mr Mango Smoothie shop, The Mad Lab Artist creative-Collaborative work space and gallery, ARC Lighting (High End performance lighting), MV Electric (Electrician), A new owner to CB Restaurant that recently got permission to have live music. I also gave space for free for the Toy’s for Tots Collection headquarters.

With all do respect I have done more in 6 months than the Redevelopment Agency has done in 16 years for the area.

I have accomplished all of this while simultaneously defending against the City Hall machine that brought 3 zoning violations, blocked a young aspiring dentist from opening on Wall St, blocked my attempt to put 9 small financially affordable apartments above FC Bank, and issued several lawsuits.

Can you imagine if the City got out of the way and stopped blocking most of my efforts?

I just tried to call you.

The last thing I want is a hand out from the City. I want the exact opposite. There is way too much oversight and involvement in the Wall St area.

The City has been “helping” fix Wall st for several decades.

Time for them to just get out of the way. Loosen the regulations and restrictions. Make sure the goals are clearly defined and then give the people of the area the freedom to operate.

The results will be amazing!

We need more apartments in the Wall Street area. That’s one of the best ways to get this area revitalized. However Projects should be sized, and in keeping with the historical nature of the area. DisCala’s head of the harbor north is a good example, POKO – not so much. Milligan’s idea for small affordable units with zero amenities space is a good idea. You want residents outside and engaging in this area.

We need more people like MIlligan and Discala to turn older worn out buildings into solid housing stock. Or build new on available sites. They “get” the area and understand that limiting size and scope is essential to create an integrated project.

Finally, a key element to creating a vibrant area is for government to minimize its impact. The private sector is much more adept at meeting market needs. The government should focus on its mandate – creating infrastructure to allow the private sector to succeed. That way we all benefit.

Suggested Infrastructure improvements could include revising the very business detrimental policies of the parking authority, really consider Milligan’s ideas on zoning regs – study them, debate them etc he has some very good ideas, and strongly advocating for a train station on Wall Street – if correctly done it could be zero cost to we the taxpayers. That is a winning trio which would result in a much stronger grand list, a revitalized downtown, the a place Norwalk would be proud of.