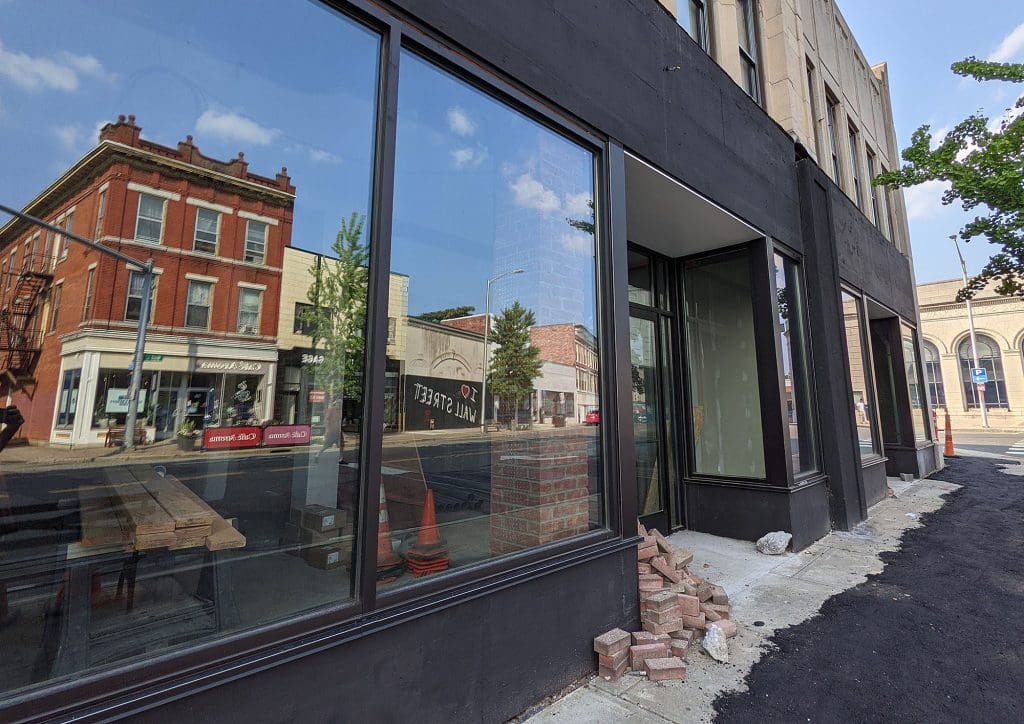 The former My Three Sons, now owned by real estate broker Jason Milligan. Note “I ❤ Wall Street” reflected in the window. That’s a mural on the shuttered former David Harvey jewelers across the street, which Milligan also owns.

NORWALK, Conn. — So there’s a new NancyOnNorwalk opus on the major “POKO” lawsuit.  What of real estate broker Jason Milligan’s other legal entanglements?

Below is a summary. First, some hints:

Milligan claims he is “absolutely kicking ass” in his quest to have a court overturn the latest redevelopment plan for central Norwalk.

Through discovery, he uncovered a 2019 email in which then-Assistant Tax Assessor William O’Brien chews out then-Director of Community Development Planning Tami Strauss, accusing her of inappropriately attempting to have the tax assessment office help classify Norwalk Center as blighted.

The blighted designation was necessary to legally justify a redevelopment plan for the area.

O’Brien, now an assistant tax assessor in Madison, did not return a phone call asking about the email exchange.

Attorney Candace Fay, Milligan’s cousin, represents him in this lawsuit against the Norwalk Redevelopment Agency and Judge Sheila Ozalis is presiding. Ozalis recently pushed back dates and now “dispositive motions” are due Oct. 15.

Meaning, if the Redevelopment Agency wants to dismiss the case, that’s when the motion is due, after discovery efforts are completed.

Servpro collectes via a mechanic’s lien

Milligan was accused of doing demolition without a permit in July 2019, after a water pipe broke and flooded the businesses on the street level. He subsequently remodeled those businesses to a new condition.

NancyOnNorwalk was poking around the City website recently and found a mechanic’s lien on the property. In November 2019, ServPro said it was owed $24,285.29. 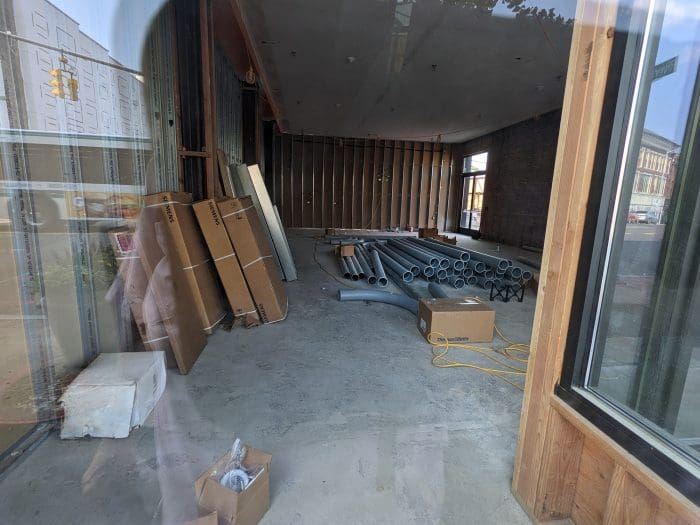 The former My Three Sons building at 64 Wall St. on July 7. “So far I have a bakery that is ready to open and I have several other tenants interested,” Milligan wrote Saturday. “Sadly, zoning and the Redevelopment Agency have been less than enthusiastic about some of my plans including a hotel above.”

Asked for an explanation, Milligan said there’s been a concert series in his parking lot, otherwise referred to as an art park, and that hasn’t gotten news coverage. He’s opening a bakery in the area soon, he said.

“Do you think Norwalk Taxpayers have gotten there moneys {sic} worth from Crony Joe Williams? Why don’t you demand justification for there {sic} awful strategy? And money wasting? The taxpayers got more for their money from the $800,000 accidentally wired to China,” he wrote.

On Monday, Milligan revealed that the lien had been settled June 2. That information is not yet available through the Town Clerk’s online land records.

“I paid them more than I should of to get rid of it,” he wrote. “Liens and litigation is unfortunately part of this business.” 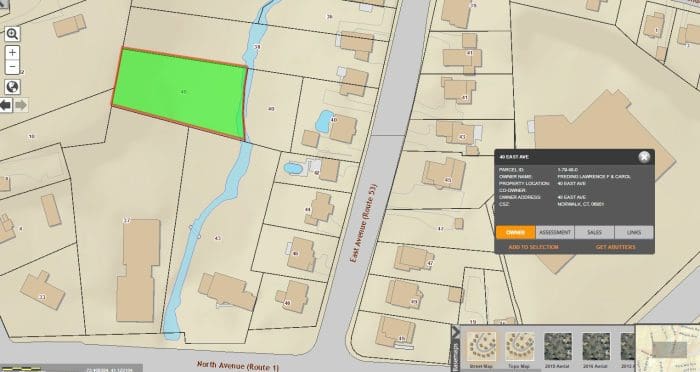 The City’s GIS (geographic information system) website shows the land owned by Carol and Lawrence Freding, at 40 East Ave., and the brook running through it.

Early last year, Milligan was accused of having bricks dumped in a wetland on a property behind 37 North Ave., which he owns under IJ Group. He called it was a misunderstanding and removed the bricks, but Norwalk Senior Environmental Engineer Alexis Cherichetti said she discovered fill on the brook’s bank while investigating the situation.

A Cease & Restore Order was issued against Carol and Lawrence Freding, owners of 40 East Ave., who say they have nothing to do with it, and Milligan. Although it’s the Fredings’ property, they can’t access it without going through Milligan’s parking lot at 37 North Ave. Their land is bisected by Betts Brook.

In late June, Cherichetti said that the conditions at Betts Brook have not changed. “None of the directives of the order were attended to,” and it was on her “short list.” She promised to send it to the City’s legal department.

That hasn’t happened yet but the lawyers have been given a heads up, Attorney Brian McCann said last week.

Here’s one you haven’t heard of: Milligan has filed a Freedom of Information complaint against the city.

Milligan put in a FOI request for a host of City emails early last year but the City stonewalled him for six weeks and when he finally got 200 pages of stuff, it was heavily redacted, he said. He filed a complaint in June 2020 alleging the redactions are not compliant with statutes. A hearing is scheduled for Friday.

Last week, he provided NancyOnNorwalk with emails from 2020 concerning the then-developing new design for Wall Street Place. According to Milligan, they show that Corporation Counsel Mario Coppola is “100% in charge.”

“It is as if he owned the Tyvek temple. He is so far out from a proper attorney advisory role it is ridiculous. He is really brazen,” Milligan wrote. “I have never seen another attorney make it about himself and insert himself so deeply into everything.”

Coppola, who regularly updates the Common Council and Redevelopment Agency on the lawsuit, mentions in the email exchange that he’s representing clients he’s had discussions with.

There are also communications concerning the settlement offer made to Milligan last year. In January 2020, Coppola made an offer: JHM would buy the lot and an adjacent property from Milligan for $4 million; Milligan would pay the City nearly $1.3 million as compensation for the parking spaces and withdraw his related lawsuits.

In April, he explained to a Citibank administrator that the offer in compromise filed with the court, offering Milligan a chance to settle the case by paying nearly $2 million, established a benchmark. Since he didn’t accept the offer, Milligan will be charged 8% interest on that sum dating back to the time the complaint was filed if the court decides in the plaintiff’s favor, Coppola said.

“Therefore, the judgment could be increased by 40% to 50% with the additional statutory interest,” Coppola wrote. “The time for accepting the Offer expired without Jason accepting it. There will be no further settlement discussions with Jason at any time in the near future.”

There’s also an email in which the bank official, Jeremy Johnson, writes, “We have consistently agreed among all of us separately and corporately that we shouldn’t trust Milligan.”

Milligan has been shocked and dismayed to learn that the FOI Commission lacks teeth.

“Typically, if a public agency is found to be in violation of the FOI Act as it pertains to records, the agency is ordered to produce the records ‘forthwith,’” FOIC spokesman Tom Hennick wrote to Milligan last year. “The FOI Commission also has the authority to levy a civil penalty of $20 to $1,000 against the individuals violating the FOI Act if in the Commission’s opinion, the violation was egregious. The Commission can only issue the civil penalty if the complainant formally seeks one.”

“I can see why they routinely ignore and violate FOIA. To hold them accountable is extremely time consuming and difficult,” Milligan replied.

So if the emails were heavily redacted, how did he get the ones allegedly showing Coppola is “100% in charge”?

“The 1st batch I got was almost totally redacted,” Milligan wrote. “I fought for over a year through the FOI Commission. The law office tried all sorts of tricks to continue the delay. Then a few days ago as our hearing date approached they finally released completely unredacted docs.”

“He requested records in the Spring of 2020. The emails he sought consisted of communications pertaining to attempts to resolve a pending claim. These records are specifically exempt from disclosure under the FOI Act. Thus the substance of the communications were redacted.

“Apparently Milligan filed an FOI appeal last year. I do not believe he put us on copy of it.

“The first I was aware of his claim was in April 2021. We reached out to the FOI ombudsperson to explain our position with the hope that maybe a third party could help Milligan understand the law.

“As the hearing drew near I inquired and determined that the prior claim had resolved. Based on this, and in an attempt to not further waste taxpayer money by tying up half the Law Department on this matter, I sent the unredacted emails to Milligan.

“Instead of withdrawing the claim, he demanded additional records (from last Spring forward) and said he might agree to postponing the hearing if we dropped everything and gave him the records.

“At this point we have turned over thousands of records to M in his many lawsuits. We are also using our resources to respond to other FOI requests filed by him.

“The bottom line is that our redactions were, at the time, appropriate.”

Emails alleged to show Coppola is a shadow Mayor

Lawsuits should be the last resort!

Sadly under Mario Coppola’s law office it is the 1st option.

That way secrecy can be maintained and big law firms can be rewarded. Coincidentally the big law firms are also the biggest campaign contributors.

Norwalk’s legal bills have sky rocketed under Mario. What do we have to show for it all?