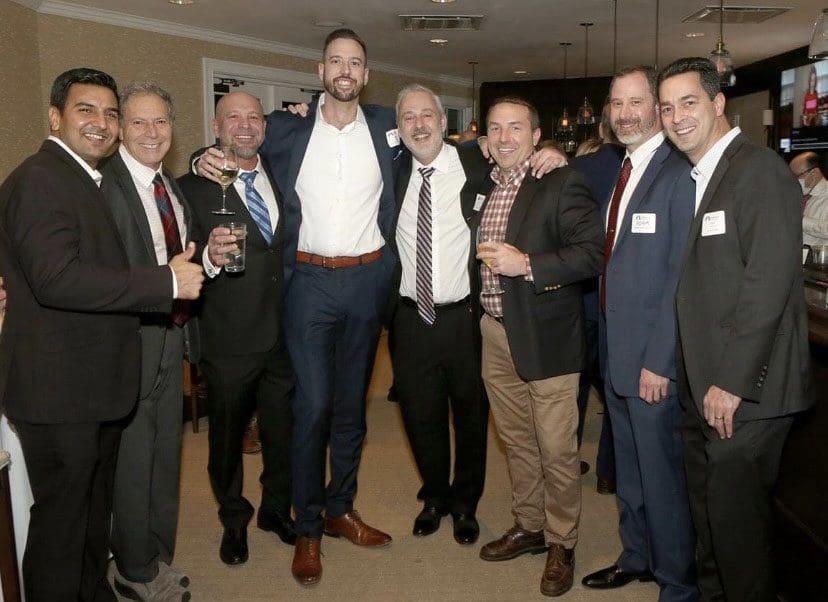 Milligan is pictured arm in arm with two combatants in his ongoing legal war with the City and the Norwalk Redevelopment Agency.  The tall fellow in the middle is Redevelopment Agency Executive Director Brian Bidolli, who is quoted in a Norwalk Police report filed in September saying that Milligan had been screaming at his staff.

Milligan is a defendant in a lawsuit filed by Redevelopment and the City after he bought five “POKO” properties in May 2018 although both parties had asked him not to go through with the transaction, considering that the Land Disposition Agreement governing the properties specifies that Redevelopment has the right to approve a new “redeveloper” for the land. Milligan maintains the LDA is invalid.

To Milligan’s right in the photo is Common Council member John Kydes (D-District C), who votes on issues involving this lawsuit. That includes a settlement offer Milligan turned down in 2019. Former Council member George Tsiranides, also shown in the photo, voted on it, too.

Milligan has said he wants to “sue the Norwalk Redevelopment Agency out of existence.” One of the lawsuits he has filed seeks to invalidate the Wall Street/West Avenue Neighborhood Plan; he’s quoted in court documents as calling the Agency a “crooked pile of crap” and its staff as “lying, cheating, scumbags,” including one relatively new employee who is a “little punk.” He’s also appealing the Zoning Commission’s most recent approval for Wall Street Place phase I, commonly called “POKO.”

There’s a new lawsuit under Milligan’s oeuvre: he’s appealing a Notice of Findings of Violations issued Oct. 29 by the Building Department, according to the complaint filed on his behalf by Attorneys Marc Grenier and Joseph DaSilva. Grenier represented the Redevelopment Agency for years but no longer has that role, Bidolli said Monday. Grenier last appears in Agency minutes in March, a meeting which featured an executive session on legal services.

The complaint mentions 20-26 Isaacs Street. That’s the former El Dorado Club, directly adjacent to “POKO.” Much of the building disappeared after Milligan bought it in September 2020. 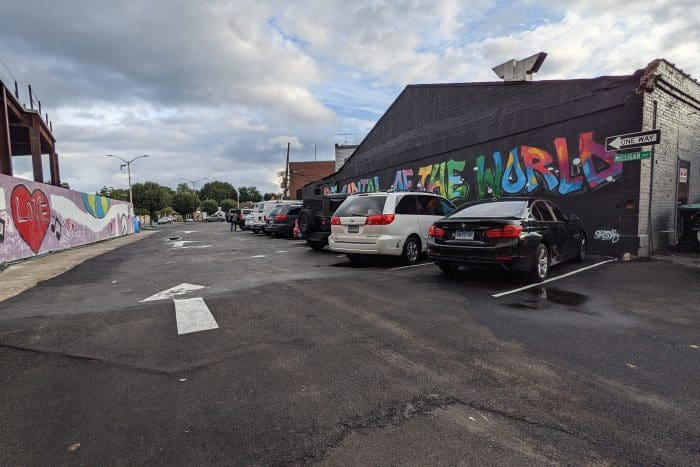 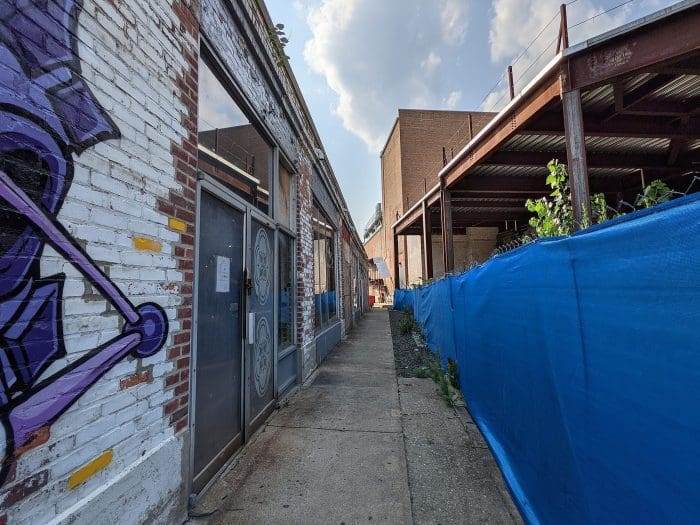 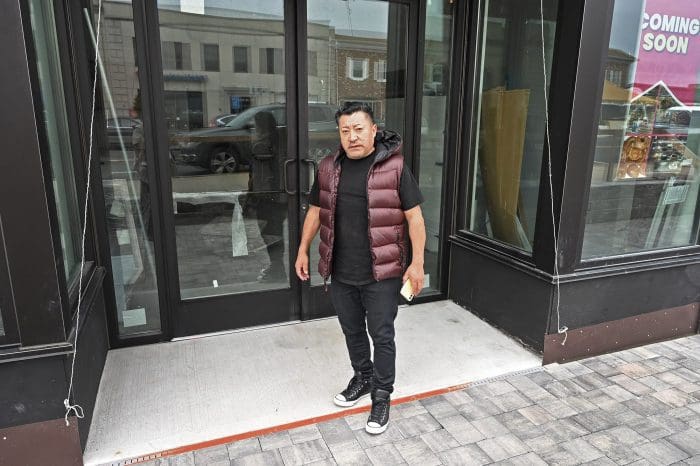 Byron Sanchez in October in front of Sabor Ambateño, located on the River Street side of 64 Wall St., the former My Three Sons building. The business cannot open. Sanchez needs a certificate of occupancy and cannot get it. (Harold F. Cobin)

Milligan had a permit that said it was for “demo interior only.” In October, he pointed out that it “says in Bold Letters at the top DEMOLITION PERMIT,” taking issue with the characterization of there being “no permits.”

“I demolished a portion of the building,” he said. “… I pull a lot of permits. I am definitely in the top 1% of # of permits pulled in Norwalk if not the top person. Understandably with the shear {cq} volume of permits I pull there will be some issues. The problem is I have pissed off a number of people by speaking up and speaking out so when I have a small error they blow it up out of proportion. They also give my permits a really hard time in some departments.”

Recent legal documents indicate that the City and Redevelopment are expecting a new Milligan lawsuit, stemming from the “Byron the Baker” controversy.

Byron Sanchez has invested more than $100,000 in equipment custom-made for a space owned by Milligan in the former My Three Sons building but has yet to receive a certificate of occupancy, without which he cannot open his bakery. City officials say the dispute concerns something Sanchez has no power over – the façade, owned by Milligan.

Milligan had a permit to “to install a single new storefront window without doors on the River Street side of the 64 Wall Street building,” Mayor Harry Rilling said.

“Instead of building what was applied for and approved, the applicant illegally constructed three storefronts,” Bidolli wrote in October. “We have requested, but not received, any other applications matching what was built outside the permit scope. We are unable to advance a project when we do not have a complete submission.”

Milligan’s “erratic” behavior has made Redevelopment Agency staff so uncomfortable that locks and an intercom system were installed at the Agency’s Belden Avenue office, Bidolli stated in a court deposition.

The Agency called police to the office on Sept. 7. Bidolli told Officer Taylor Equi that City officials at been at the office for a meeting and when they came out, Milligan was yelling at them, according to the report. Milligan was said to have blocked a man’s vehicle and lunged at him a couple of times, though Bidolli said he didn’t see the incident. Equi wrote the man’s name as “Steve Kloche.”

Kleppin told Kulhawik that an argument with Milligan “became heated” and he decided to leave, but as he got into his car and tried to close the door, Milligan forced his shoulder in, then accused Kleppin of trying to injure him, according to the report.

Asked in October about the incident, Biddoli wrote:

“While working every day towards fulfilling our mission to strategically assist with redeveloping Norwalk, our staff, as well as members of the public we interact with at the Norwalk Redevelopment Agency, deserve a workplace where they feel safe and protected. In my role as director, I take this responsibility very seriously.

“While incidents such as those on Sept. 7 thankfully haven’t been the norm, these types of behaviors are no less disturbing. Rest assured that we will continue to do everything we can to maintain a safe work environment for our staff as well as members of the public.

“I’d like to thank the members of the Norwalk Police Department for their prompt and professional response to this incident.”

“The report I filed was just to document what happened.  Mr. Milligan and I have spoken since and there are no issues,” Kleppin said Oct. 21.

Milligan alleged that there’s a pattern. “Pre Covid I went to the law office,” he wrote. “Nobody was there so I peeked down the corridor calling out if anyone was there. {Corporation Counsel Mario Coppola} calls the police, installs bullet proof glass and makes an enormous incident out of it.”

Deputy Corporation Counsel Jeffry Spahr said at the time that he’d been talking to the City’s “Building Management group to develop a system to regulate public access to our Department for a number of reasons.” Spahr called Milligan’s behavior, “rude, annoying and offensive.”

“This latest meeting that Brian created a police report for is even more ridiculous. Read Brian’s statement. He did not witness anything.

“They held a meeting with Byron the baker and 5-6 other people. They refused to let Byron’s fully vaccinated contractor who was wearing a mask into the meeting citing Covid concerns. The baker’s 1st language is Spanish. He knows nothing about construction or permits. The contractor was there to help him figure out how to get his bakery open. At the meeting, they tried to convince the baker to move to a different location and even offered him money to help.

“Perhaps you are familiar with the term ‘tortuous interference with a contract’?

“The fact that those snowflakes filed a police report says a lot about them. The fact is that Steve Kleppin did slam his car door into my elbow. He then aggressively exited his car and made threatening movements toward me with clenched fists.

“If anyone had the right to file a police report it would be me for Steve Kleppin assaulting me.”

City officials have said that Milligan’s contractor is doing the work for Sanchez.

No charges were filed, Spahr said in October. “The Reports were filed in order to document the incident.”

Milligan submitted the photo Dec. 21. He didn’t reply to a Dec. 27 email asking if it was from a holiday party.

On Monday, former Council member Rich Bonefant, a professional photographer, said he got the shot Dec. 16 at the Greater Norwalk Chamber of Commerce Holiday Party held at the Shorehaven Country Club. “I often help the Chamber with event photos, this was during the social hour before the dinner program.”

Hopefully everyone can see through the exaggerations.

2 permit applications have been submitted for the bakery. Both are compliant.

Neither have been denied.

Much of the beef has to do with timing and perhaps a lack of clarity on responsibilities for each city department / Agency.

Hopefully, most of that has been cleared up and the bakery can now open.

“Keep your friends close and your enemies closer”…The Godfather movie.

Not a mask in sight…

The Bartender is wearing a mask…

Yup. Missed that. Thank goodness someone with a brain was there.

Same old bologna different day. Its like a record that keeps skipping. The Wall Street Milligan saga is getting very boring.