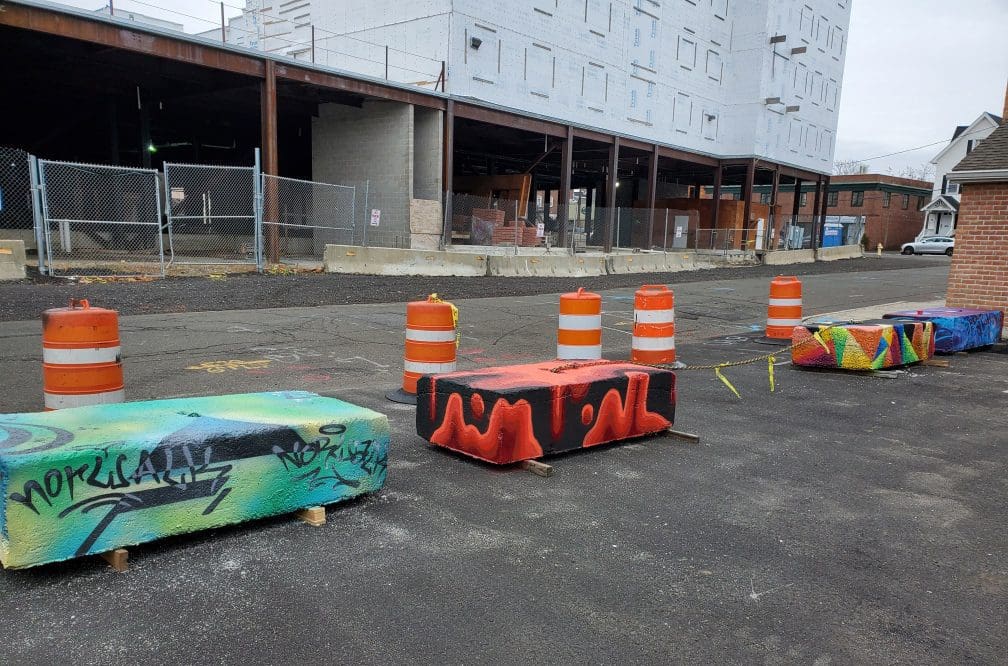 Real estate broker Jason Milligan is playing with his blocks – he’s made artwork out of the concrete barricade on his Isaacs Street parking lot. (Contributed) 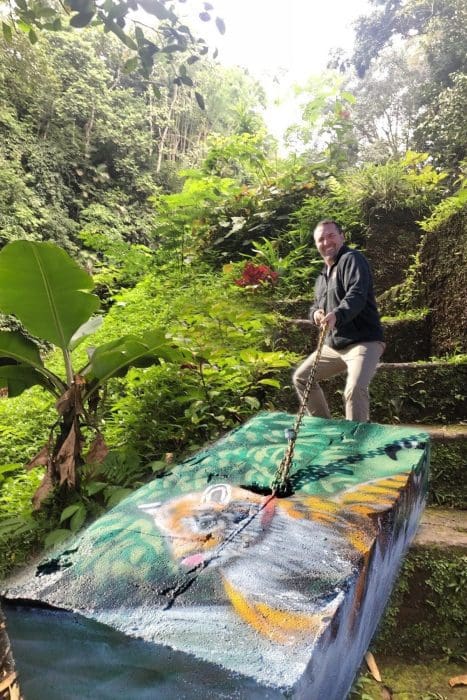 NORWALK, Conn. – Embattled real estate developer Jason Milligan is lining up legal roadblocks to go with the concrete ones that are the target of the city’s latest lawsuit against him.

Even as he characterizes the lawsuits – including the one filed Tuesday – as missed opportunities for open discussion, Milligan wants Judge Charles Lee to protect him from being questioned for more than eight hours in the long-running saga of Wall Street Place, aka POKO, and to limit the topics he can be asked about.

The plaintiffs shouldn’t be able to use the deposition as a “fishing expedition” on issues not related to the litigation, Milligan’s attorney, David Rubin states. The plan to stretch out the deposition is designed to “cause annoyance, embarrassment, oppression, and/or undue burden or expense.”

Lawyers representing the City and the Norwalk Redevelopment Agency ask that Milligan pay the plaintiffs expenses in defending what they call a “frivolous” attempt to limit the expected deposition.

They take pains to paint Milligan as employing legal shenanigans, reminding Lee that in May he himself accused Milligan of doing “this and that on the day of hearings or the day before hearings,” waiting until the Court is “all set to go” and then gumming the works with new motions. Lee also said, “there’s a remarkable pattern of dilatory litigation here,” meaning, attempts to delay.

Though he had agreed to give a deposition on Nov. 22, Milligan changed his mind two days before, in what his lawyer, David Rubin, described as a miscommunication over how long it would take. Rubin now asks the plaintiffs to either depose Milligan for eight hours now, or wait until they’ve gotten information through the discovery process – which Milligan is fighting – and question him then.

Milligan is due in court Monday for a hearing in that case, stemming from his purchase – illegal, according to City lawyers – of the former municipal parking lot from Richard Olson, brother to the late developer of the failed POKO project. Besides the deposition issue, the plaintiffs are seeking sanctions on Milligan for delays in complying with the discovery requests.

Separately, Milligan’s Wall Street Opportunity Fund is now being sued for blocking the Isaacs Street entrance to said parking lot, preventing drivers from crossing to Leonard Street. The City seeks an injunction to reopen the entrance, maintaining that it has an easement that Milligan is violating. 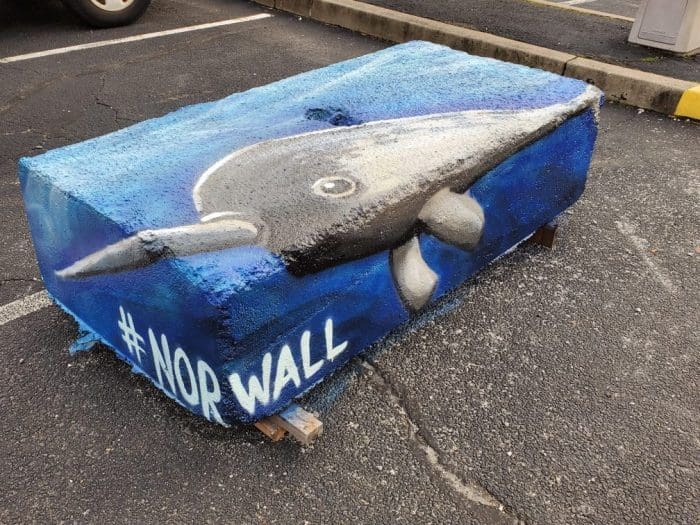 “What I want so desperately is conversation, open dialogue, public discussion and resolution,” Milligan said in response to the new complaint. “I want the same goals that these people say they want. I want to do it openly. This is an opportunity to have that discussion, but instead of having that discussion Mario brings a lawsuit to ensure we cannot have an open discussion.”

Coppola has testified in Court that he advises Council members not to speak with defendants in lawsuits filed by the City, a gag order in Milligan’s view.

What’s the opportunity? It’s a good time to “explore options for POKO,” as, “The City council and Redevelopment agency both have many new members. The RDA has a new director starting soon,” Milligan wrote.

There are five new members on the 15-member Common Council, and one new Redevelopment Commissioner – John Igneri, who is well briefed on the POKO situation as he just completed eight years on the Council.

Milligan said that for more than a year, he told Mayor Harry Rilling and Corporation Counsel Mario Coppola he “could and would” block access to the lot at some point. When Citibank and developers John and Todd McClutchy developed a plan to restart Wall Street Place, maintaining Isaacs Street as one way, Milligan made “a very large push” to explain that a one-way dead-end street wouldn’t work.

Yes, he’d want something in return for allowing the use of the lot, he said. Rilling and Coppola “refused,” or “they didn’t refuse, they wouldn’t even talk about it,” he complained.

He declined to explain what he wanted as an exchange for open access to the former City lot.

“They have gone for emergency injunction,” Milligan said in an earlier phone call. “…Why wouldn’t they talk? We could figure out something. If the exit is so important, I would work with them, I told them that for months.” 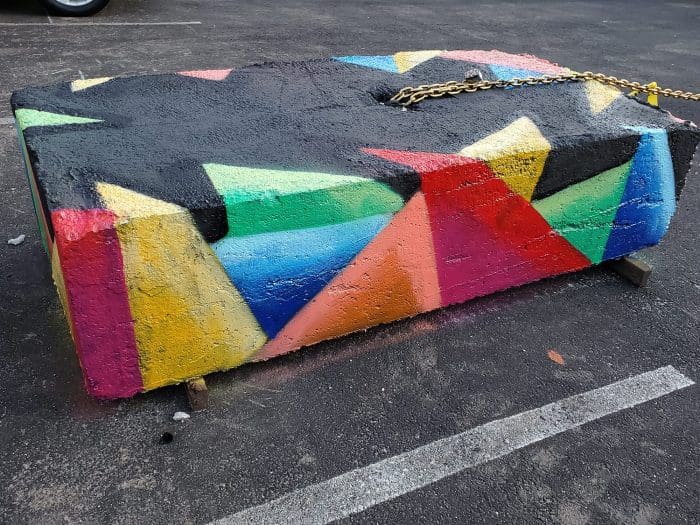 Milligan also questioned the validity of the latest suit for having been filed without Council approval. Coppola said in an email that “The Law Department has the authority to file the lawsuit. Mr. Milligan’s actions clearly violate the City’s rights to an easement for access in the area where he installed the concrete barriers for the purpose of blocking access.”

“The Council does not feel that its rights were violated,” Common Council President Barbara Smyth (D-At Large) said. “The Mayor and Council leadership were aware of the problems created by Mr. Milligan’s recent actions, including blocking off access that the City is entitled to through an existing easement, and knew that the Law Department would proceed with filing legal action against Mr. Milligan.”

“I blocked the lot after a year and a half of them ignoring me and suing me and punching me in the face,” Milligan said. “I told them I was going to do it and they came like a**holes after the election.” 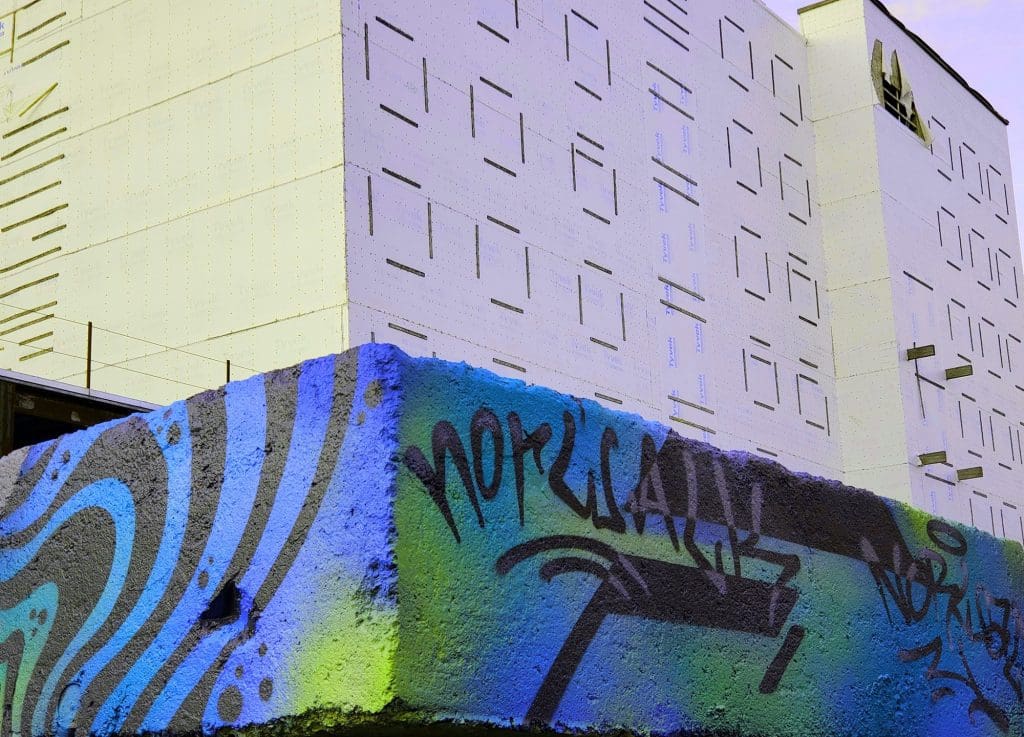 The point is that this new lawsuit is on a very slow schedule. Given the slow schedule there was/is plenty of time to talk. There was plenty of time to let the new council decide what they wanted to do. The Mayor and Mario did not need to use their own biased tainted opinions to unilaterally decide to launch yet another lawsuit thereby poisoning the well so yo speak with the new council.

I suggest that we pump the brakes and try to talk…

Mr. Milligan, Take your conversation and ideas directly to the people of Norwalk. You are wasting your time with this administration.

Until this new mix of newly sworn in common council members demonstrate they want to represent the people of Norwalk more than enabling this mayoral administration – the downtown Wall Street area is doomed. Nancy, how much taxpayer money has been wasted on these city lawsuits when we’re raiding the Rainy Day Fund to pay for the NPS enrollment increase?

I would vote for Milligan over dirty Harry.

A plan that rubber stamps affordable housing shows little imagination and kills the only independent cinema that thrived throughout the 80’s, 90’s and 00’s . We need ideas, not lazy thinking. The issac street plaza was a haven at one point, now its a desert and worse.

One thing that would please movie goers at the Garden Cinema and diners at Pontos would be the removal of the No Parking Anytime signs on that last stretch of Isaac Street leading to the blocked-off parking lot. There is ample space on that part of the street for angled parking and two-way traffic at the same time. And this is something the city can do on its own, without resorting to long, drawn-out litigation with Mr. Milligan

Does Milligan have to abide by the LAND DISPOSITION & DEVELOPMENT AGREEMENT that was made with POKO in 2007?