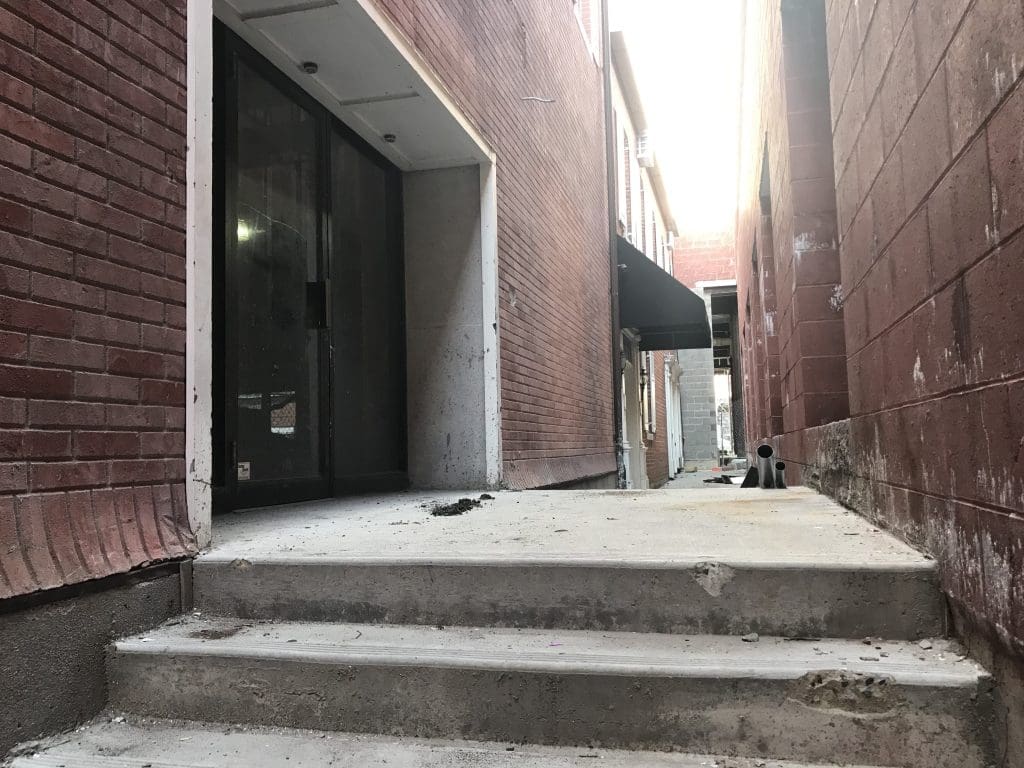 The alley behind the Fairfield County Bank buildings at 67 and 69 Wall Street. There’s an easement for a loading dock where the glass doors are, and it’s being violated by Citibank, under its entity Municipal Holdings, owner of the building at right, Jason Milligan said.

NORWALK, Conn. – A real estate broker has filed a lawsuit that he says will give him a say in how the stalled Wall Street Place phase I development proceeds.

Milligan filed the lawsuit Monday, claiming that the partially-built structure at the corner of Wall and Isaacs Streets is violating an easement for a loading dock attached to a building next door, which he owns. A Milligan legal entity, IJ Group LLC, in December bought the former Fairfield County Bank properties, next door to the unfinished edifice.

Citibank has selected JHM Group as its preferred developer to restart and complete the project, and the Common Council in executive session recently reviewed a proposal which has not yet been made public.  Milligan has called for the Tyvek-wrapped structure to instead be sold as-is to the highest bidder, a move which city officials have said would be in Milligan’s self-interest.

The violation and suit gives Milligan legal standing in phase I, and leverage over the project, he said.

“There is no ‘POKO’ (restart) deal without me. I have legal rights on phase I… Even the most minor change requires my written consent,” Milligan said.

Neither City officials nor Citibank responded to an email from NancyOnNorwalk, seeking a comment about Milligan’s latest legal gambit.

Wall Street Theater developer Frank Farricker predicted that Citibank will turn the lawsuit over to its title company, and it will go nowhere. The title company is the real defendant in the lawsuit, which could go on for years, he said.

“I like Jason and I respect his intelligence. … I don’t agree with his approach,” Farricker said.

Milligan’s suit will not succeed “because Connecticut land stuff is so common,” Farricker said.

He noted that title companies apply a monetary damage to situations like this. “I told him that,” Farricker said. “He said, ‘no they’re going to have to take the building down.’”

The loading dock easement dates to 1956, and states that the bank will pay the Norwalk Parking Authority $200 a year for use of the property. POKO obtained the parking lot from the City as part of the Wall Street Place plan.

The late Ken Olson, leader of POKO Partners, sought to terminate the bank’s easement in 2015 as part of closing on a bank loan for Wall Street Place, Milligan said.  Olson sent the bank a letter accusing it of being in default, but not following the default procedures, and the bank rejected the claim of default.

Olson’s letter claimed Fairfield County Bank was in arrears on its rent. The bank sent him a check. Olson rejected the check and claimed the easement was terminated, according to the complaint.

Fairfield County Bank was expecting to be an anchor tenant in Wall Street Place and did not move to legally challenge Olson because it seemed to be insignificant, Milligan said.

Olson and POKO did not follow the default procedures because it was looking to close on its $30 million construction loan, the complaint alleges. POKO executed an affidavit in order to satisfy the requirements for closing on the loan, but this wasn’t filed on the land records for the bank properties.

“Citibank are not the brightest bulbs,” Milligan said, accusing Citibank’s municipal lending arm as being “used to dealing with no competition.”

“They make friends with the government and cook up a deal, everyone looks good,” Milligan said, explaining that because the deals involve affordable housing, a “worthy ideal,” there is less public scrutiny. 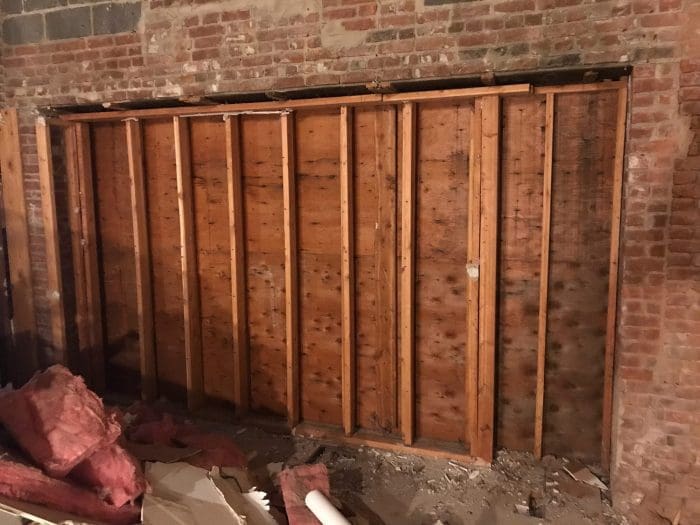 The partially-constructed building makes the “loading dock,” which is where a pair of glass doors are, unusable, Milligan said, which is a major inconvenience. The construction changed the grade, and it would be possible to pull a truck up to the dock if not for the building and the grade change.

The exhibits included in the lawsuit refer to a bank drive-through and state that the loading dock was removed in 2008.

Milligan has suffered irreparable harm due to the construction, which will be exacerbated and compounded if a new redeveloper resumes construction of the building, the complaint states.

The drainage in that alley is terrible.  “If we talked for five hours, I probably wouldn’t cover all of the problems,” Milligan said.

He has prospective tenants who would use the loading dock, he said.

“Over time there will be different users and tenants that occupy the space and have different loading and unloading requirements. The easement does not require that I keep a certain type or style of loading dock. It gives me the right to access my building across their property and to load and unload forever and always,” Milligan wrote. “I have several tenants that have heavy loading and unloading requirements that also have ties or potential ties to the Wall Street Theater. The theater has limited loading access. Reopening my easement will be super helpful.”

“I also have a tenant independent of the theater that has variable loading needs,” Milligan wrote. “They are potentially willing to put up with limited loading but once the proper rights are restored it will really allow their business to expand. In about a month I will explain more fully about this tenant.”

“During the demolition of parts of the bank interior and during construction of the new FC Bank branch the loading and unloading of materials and debris has been unbearable,” Milligan wrote. “Building a project on the floors above both buildings will be much easier when the easement is restored.”

Milligan is being sued by the City and Redevelopment Agency because he purchased POKO phase II and III properties last May, without obtaining approvals that the plaintiffs say were required.  The suit accuses him of unfair trade practices and tortious interference.  The plaintiff’s request for a temporary injunction which would prevent Milligan from modifying or renting the properties has resulted in a hearing with no end in sight: it began in December and is scheduled to resume on May 22 with testimony by an expert witness called by Milligan.

The plaintiffs sought to block that testimony but on Monday Judge Charles Lee ruled that the expert would be held on a tight leash in answering questions. Milligan had been expected to take the stand himself on March 25; whether and when that will actually happen is unknown.  The public parties and Milligan have accused each other of needlessly delaying; Milligan recently admitted to delaying so that he could have more time to rent the properties before a possible injunction.

Milligan also recently filed a lawsuit against the recently approved Wall Street-West Avenue Neighborhood Plan. He said Monday that the plan will be declared invalid, and the City and Redevelopment Agency will be forced to deal with him in a “Milligan-leveraged recognition agreement.”

Milligan vs Citibank Summons, Complaint, and LP for Service (5.6.19)

The Milligan Leverage Recognition Agreement “MLRA” was a joke poking fun at the various documents for the project.

A better one would be the Bad Deal Regognition Agreement “BDRA”. The city should formally recognize that they made a horrendous deal when they gave away 2 parking lots.

That deal is done. Chasing it or trying to hide it just poisons potential future agreements.

It is time at least confine it to within the property boundaries.

Why does our Mayor and DPW allow the continued encroachments into public space?

It is past the time to take the garbage bag off of the traffic light and reopen two way travel. Demand that Citibank move the Jersey barriers onto their property so that the people and business can start using their road and parking again!!

Thank you Jason for continuing to stand up to the joke of an establishment that is our city hall and all the ills they have wrought in their own self-interest which has been nothing but a terrible detriment to the people who struggle to make our communities thrive.

Frank is pretty smart but any title insurance that might have been in place went out the window when Citibank took the property through Foreclosure.

I however have title insurance for my valid easement.

It’s obvious there are folks on both sides of the fence as to whether Mr. Milligan’s actions are helping or hurting the eventual resolution of this city-center tragedy. But consider this: without the “politics” – we would never be in this situation. And Mr. Milligan didn’t add the politics.

What is clear is this: The Redevelopment Agency is completely screwing up another Norwalk tract for generations, at a huge loss to the taxpayers. It also appears – based on the “explanatory statement” that never comes, and the many “executive sessions” – that our mayor is in so deep, so far over his head – it isn’t clear to him anymore which way is up, or more importantly – OUT. Further – his counselor Coppola screwed up with the parking lots long ago – but apparently, his ego will not allow him to recuse himself from the mess he helped to create. And the only winners to date are the lawyers.

When will this total project management incompetence, ego over intelligence, and simple greed get out of the way of progress for the betterment of the Wall Street community and the taxpayers in general? The best bet is November 5th.