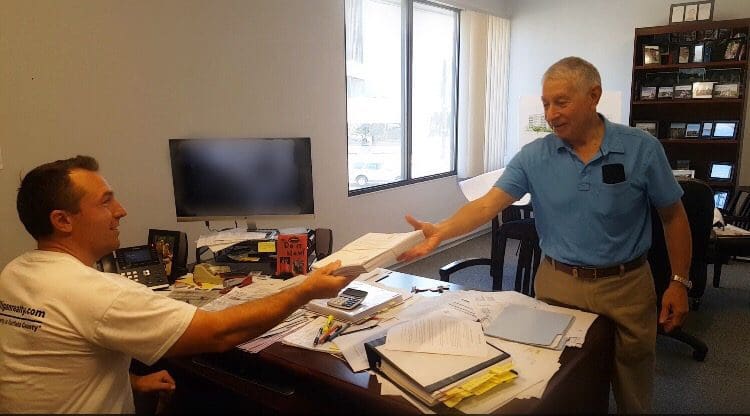 A photo provided by Jason Milligan, showing him being served Saturday by State Marshal Fausto Carusone (right) with the City of Norwalk’s lawsuit.  What appears to be digital alteration to blur Milligan’s computer screen was applied to the photo before it was provided to NancyOnNorwalk. (Contributed)

“Name the time and place. I will be there. Bring ‘all parties’,” Milligan wrote last week in a comment on NancyOnNorwalk.

The time and place appear to have been named.  According to Milligan, he will meet with Norwalk Mayor Harry Rilling, Assistant to the Mayor Laoise King and Corporation Counsel Mario Coppola on Friday.

King, Coppola and Norwalk Communications Manager Joshua Morgan did not reply to a late Thursday email asking for confirmation.

Milligan on May 31 bought five properties from POKO Partners principal Richard Olson; three were slated for the Wall Street Place Phase II development, and two are in the boundaries of what would be Phase III. Norwalk has filed a lawsuit seeking an injunction against the sale on the grounds that Olson did not get Redevelopment Agency approval, as required by the Land Disposition Agreement for the properties.

Construction on Wall Street Place Phase I stopped in August 2016. Officials were working with Citibank to restart Phase I and needed Phase II property to provide parking to make Phase I compliant with Zoning regulations, under a deal approved by the Zoning Commission in 2016. The deal was brokered by the late Ken Olson; Milligan does not appear to be bound by the agreement.

Milligan talks of reenergizing the Wall Street area and in a June 5 email wrote to city officials about his vision for the properties he had just bought.

“The vision and plan of attack I have in mind is definitely not what many of you have in mind when you seek a plan,” Milligan wrote. “Now is not the right time for a detailed plan for the properties I own. In many respects they are a blank canvas with all the flexibility and possibilities in the world. My goal is to keep them as a blank canvas until we all figure out the best way to solve phase I.”

Milligan said Thursday that he has never built anything like Phase II, which is planned as 96 apartments, 7,276 square feet of retail, 9,445 square feet of live/work space on the ground floor and a 276-space parking garage.

“I will hire a builder that’s built lots of things like that,” he said.

Milligan bought Olson’s properties under the legal entity Wall Street Opportunity Fund LLC. He is listed on the Secretary of State’s website as a member of the LLC and its manager.

“The city is willing to work with any property owner of Phase One and Phase Two, as long as it is within the bounds of the {Land Disposition Agreement},” Rilling said in a June 1 statement. “To ensure these contractual obligations are not disregarded we are considering all of our options – including litigation.”  On June 18, City officials announced a lawsuit against Milligan and Rich Olson seeking an injunction and damages on the grounds that the seller knowingly violated the LDA.

“Some people think lawsuits are the best way to get everyone to the table. If getting me to the table or keeping at the table is a goal than lawsuits should not be the first option,” Milligan wrote June 5 to Redevelopment Agency Executive Director Tim Sheehan, Rilling and others, in an email obtained by NancyOnNorwalk through a Freedom of Information request. “I respectfully request that we have several exploratory discussions about the ultimate goal(s) before any lawsuits are initiated.”

In the time since, Rilling and others have requested Milligan communicate only with Redevelopment Agency Attorney Marc Grenier and Coppola.

“We have always been and continue to be willing to sit down and discuss this development with him, but Mr. Milligan needs to agree to that meeting with all parties present. Instead, he insists on having multiple side conversations with city employees, which is counterproductive to moving this project forward,” Rilling said in a statement June 30.

City officials previously said Milligan was untruthful in a May 31 meeting in the Mayor’s office, where Milligan “offered assurances to City officials that he had no intentions on closing on the POKO properties. This was untrue, as a property transfer was recorded in the Town Clerk’s office directly after the meeting,” according to a City press release.

“I admit that I was misleading at the meeting but I did not lie,” Milligan wrote in an June 2 email to Coppola and Redevelopment Agency Attorney Marc Grenier. “A lie is an untrue statement with the intent to deceive. I told only true statements! There is a difference although I can understand you are upset.”

Milligan has since hurled insults, calling Rilling a “spineless coward” after the City announced its lawsuit.

“We have always been and continue to be willing to sit down and discuss this development with him, but Mr. Milligan needs to agree to that meeting with all parties present,” Rilling said in a June 28 statement.

Last week in NoN’s comment section Milligan referred to Rilling’s statement as “a flat lie!”  “Name the time and place. I will be there. Bring ‘all parties’,” he wrote.

“Thank you for the meeting earlier today. I thought it went well given the circumstances. I had 4 action items from the meeting. Providing a ‘plan’ in writing was one of them. Reaching out to Citibank about working together & getting a site tour, and giving Mario & potentially others a site tour of my properties. (I would like to limit this tour to 2-3 people).”

Milligan gave Coppola a brief tour of his properties last week, he said.

“The properties I own very likely will be part of the solution to phase I and l remain wide open to discussion and negotiation. I have some general ideas of what I would like to do, but I remain flexible to  respond and accommodate  phase I solutions, and I also remain flexible based upon the  capable business tenants that I can attract. In the last 2 weeks I have had conversations with a nursery school, a small manufacturer, a stage production and lighting company, a coffee roaster, a music school and a few office users. Signing those tenants up for space will help shape the immediate plans. The degree of success or failure of those tenants further dictates my decisions.

“My immediate plan of attack is to do as many little things to the neighborhood that are possible without putting permanent ink on the canvas. Opening up the entire Leonard st parking lot for the use of the neighborhood is one of those steps. Cleaning up garbage, debris, glass, nails etc in and around all of my properties. Repairing all leaking roofs. Cutting back over grown vines, trees, shrubs and adding back some inexpensive landscaping. Painting certain areas where appropriate.

“Also I want to fill as many empty buildings as possible on a short term basis. There is only one fairly long term lease in any of the properties I just bought and I intend to keep it that way to provide maximum possibilities.            ·

“While I work on the above I plan to reach out to Citibank to see where there is room for discussion.

“As you know I have both Fairfield County Bank buildings under contract that abut phase I. Those two buildings are the two buildings I have the most pressing desire to do something quickly with. Tim and Steve Kleppin are aware of my vision for those two buildings. FC Bank will remain on the first floor of one of the buildings with a smaller, brand new and modern branch and I want to build small no frills inexpensive but cool apartments above. The first several residents for these small, cool, no frills apartments excited and can’t wait for them to be built!

“I very much desire to work with the city and Citibank to bring phase I to a successful conclusion that works for everyone including and most importantly the neighborhood stakeholders and the taxpayers of Norwalk . I believe the mayor wholeheartedly agrees with this goal.

“The question is how to get there. Some people think lawsuits are the best way to get everyone to the table. If getting me to the table or keeping at the table is a goal than lawsuits should not be the first option.

“I respectfully request that we have several exploratory discussions about the ultimate goal(s) before any lawsuits are initiated.

“I also think it would be prudent to bring in a third party advisor that has experience with land planning but no history with this transaction to get a fresh perspective. Bill Collins, Steve Kleppin or perhaps someone from another town?”

King did not reply to a late Thursday email asking about the suggestion for a third-party advisor.

Hope Milligan and Mayor King can work this out. Don’t want to wait another ten years for something good to happen.

Coppoloa and Grenier do not have a track record, experience or a vision. They should not be driving this train. Wake up Rilling!

The Hour was unable to provide information on call for a stabbing pm wall st night before last where a patient was transported to the hospital may one of the mayors can assure Jason safety on the street would be something the city hasn’t provided yet where anticipated crowds are expected in the next couple of years.

This last fire shows 0n main st shows clearly the need for a new mayor team one to think the other to act.

@Rick. Please read your comment before posting. I cannot make heads or tails of what you wrote.