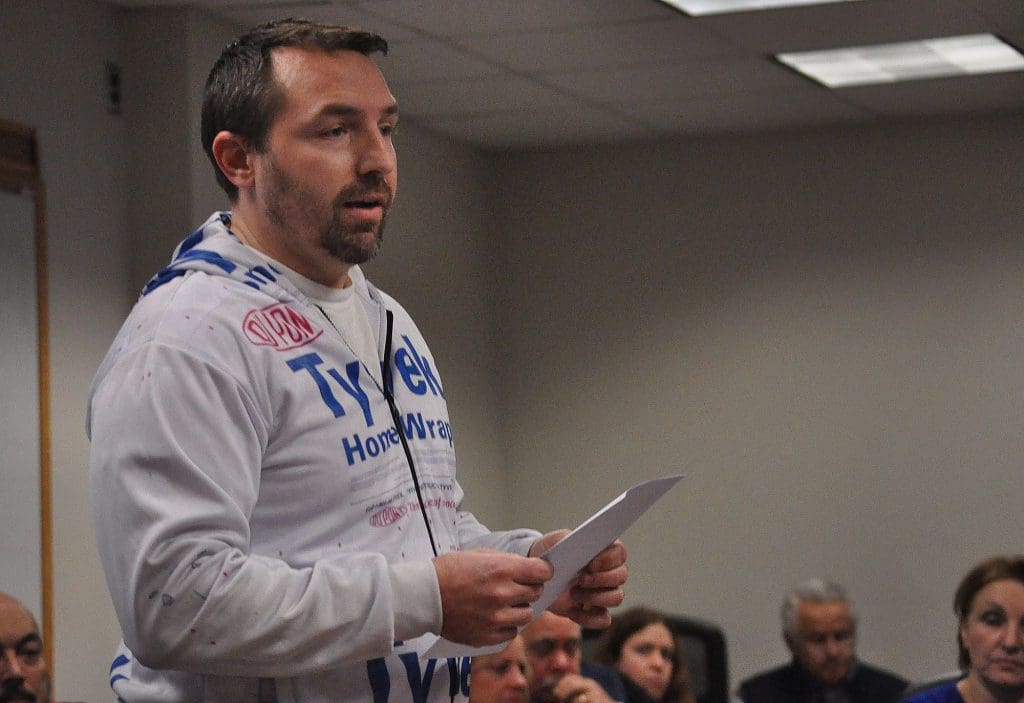 NORWALK, Conn. – A real estate broker being sued by the City of Norwalk has sued it back, in hopes of invalidating the recently-approved neighborhood plan for the Wall Street-West Avenue area.

Jason Milligan, under the legal entity IJ Group LLC, filed the lawsuit Monday against the City of Norwalk, the Norwalk Redevelopment Agency, Harriman Associates and the Regional Plan Association (RPA). Milligan alleges that due process was not followed in the plan’s creation and approval, and accuses the City and the Redevelopment Agency of fraud.

“I believe that that redevelopment plan, at the very least, is going to go back to the drawing board and be done properly. They didn’t follow the very basic rudimentary nuts and bolts of the (state) statute,” Milligan said Monday.

City and Redevelopment Agency officials and their attorneys had no comment.

Milligan’s lawsuit claims, as Milligan and others did during the lead-in to the plan’s approval, that the determination of “blight” or “deteriorating condition” used to justify the redevelopment plan is invalid. RPA “intentionally mislead” the Common Council and the public with its blight determination, the lawsuit filed by Attorney Candace Fay states.

Fay in February warned Council members that she’d file a lawsuit if they approved a real estate tax incentive program in connection with the plan. The tax incentive has been tabled for an uncertain period.

“Historically, the City of Norwalk has loosely and inappropriately utilized the term ‘blight’ to accomplish its ever-evolving objectives; it is wrong and it will no longer be tolerated,” Fay wrote in February.

Fay is related to Milligan, but he has repeatedly declined to explain how.

The lawsuit also echoes Fay’s February comments in that it characterizes the Redevelopment Agency as “abandoning” RPA, after its contract was extended, and alleges the RPA was replaced with Harriman after citizens questioned the RPA’s blight determination. This was a “bait and switch,” she wrote.

“Notably, the study was ‘updated’ by a consulting firm, other than the original consulting firm, and in a desperate attempt to obtain a ‘blight’ designation, it relies solely on the depreciation of the area noting that this depreciation is “sufficient to establish the conditions of a deteriorating area,” Fay wrote in February.

“People thought the RPA analysis was too broad and too overreaching, so we asked a different consultant with experience in this area to take a look at the Wall Street area to see if it is deteriorated or deteriorating,” Norwalk Director of Community Development Planning Tami Strauss said to Common Council members in February.

The lawsuit accuses Harriman and Strauss of “intentionally” misleading the public and Council.

The Agency rushed the plan through based upon “unrelated pending litigation that involves some of the properties located within the plan area,” the lawsuit states.

The Redevelopment Agency and City sued Milligan for purchasing Wall Street-area properties which had been part of a stalled redevelopment project known as Wall Street Place, also known as “POKO”.   That suit contends Milligan’s purchase violated a Land Disposition Agreement (LDA), a tri-party pact involving the City which governs how the properties will be developed.

Milligan’s suit seeks an injunction, monetary damages and punitive damages. He called it “ironic” as these are the same things the City and the Redevelopment Agency are seeking in the lawsuit filed against him.

Milligan’s IJ Group, owner of 67 and 69 Wall St., is “suffering and will continue to suffer from deprivation of property rights,” the lawsuit states.

The Wall Street-West Avenue Neighborhood Plan and its “deteriorated conditions” determination puts “a dark cloud over the area,” Milligan said.

“It says it’s in deteriorated condition,” Milligan said. “That in and of itself is a downward pressure on value and perception. Plus, they have ability to take property through eminent domain if they think it is in the public interest. Sure, they say they don’t plan to do it, but they also don’t have any projects as part of the plan. So eminent domain as a threat in that plan is affecting the rights as well.”

Being directly impacted by RDA’s land-grab I closely followed the process by which all this came about. I think its pretty clear that RDA misled the Common Council and various Commission. Whether certain council members and commissions were complicit is another story altogether.

Likewise, I think its pretty clear that the reports used by RDA, namely the Harriman report and the RPA report, we both misleading and done in such an arbitrary fashion as to make any professional in this area of valuation and blight determination question the motives of the methodology and the stated results.

Since the Wall-West Plan is completely reliant upon the findings in those two reports, and since both are literally not worth the paper they were printed upon (at taxpayer cost of ~ $25,000 if not more), its time for some accountability.

Sadly, we don’t seem to have leadership willing to stand-up and demand accountability on this front. So its up to the taxpayers to once again wade through a long and costly legal battle to get to the painfully obvious truth.