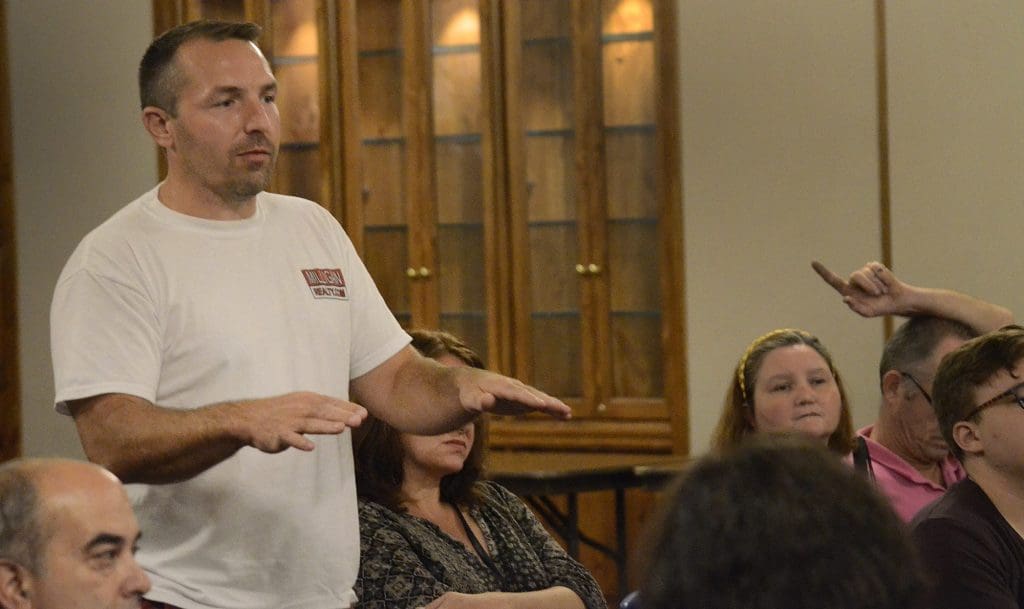 Real estate broker Jason Milligan speaks at the Sept. 23 CNNA forum in City Hall. “It is obvious to us that Milligan is desperately afraid of testifying,” Attorney Joseph Williams wrote in an Oct. 9 email, which Milligan provided to NancyOnNorwalk. Milligan denies the charge.

NORWALK, Conn. — After 11 months of fighting the City’s and the Redevelopment Agency’s request for a temporary injunction against him, Milligan has consented to ending that battle

The Common Council on Tuesday voted unanimously to approve a “draft stipulation for a preliminary injunction” in the lawsuit filed against real estate broker Jason Milligan, regarding “POKO” properties.

That means Milligan will not be in court this week or next.

The Redevelopment Agency will meet next week to vote on the proposed terms, Corporation Counsel Mario Coppola said. The terms will be then be presented to Judge Charles Lee for approval. “Now that will parties have reached the tentative settlement with regard to the injunction relief being sought, the hearing has been postponed,” Coppola said.

In a late-night email, Milligan denied that the temporary injunction has anything to do with recent court decisions that have not gone in his favor, nor a desire to avoid testifying.  “I have accomplished most of my goals for the 5 properties I purchased,” he wrote.

Earlier this month, his attorney had written that Milligan was prepared to stop fighting the injunction, a “decision based solely on a cost-benefit analysis.”

“Jason is willing to stipulate to most of the preliminary relief you are seeking,” David Rubin wrote to Attorney Joseph Williams, who is representing the Redevelopment Agency. “He further is amenable to mediating the entry of a stand-still agreement, so that parties can move forward to the actual merits of the case.”

In May 2018, Milligan bought five properties that were slated to be part of the stalled Wall Street Place development, referred to colloquially as “POKO.” The City and Redevelopment Agency sued Milligan and Richard Olson of POKO Partners, accusing Milligan of unfair trade practices in his use of various legal entities in transferring the properties. The plaintiffs have sought to overturn the deal and keep Milligan from leasing or altering the properties.

The hearing for a temporary injunction began in December. Milligan fought the plaintiff’s discovery requests,  filing three motions to dismiss, the most recent of which was denied in September. 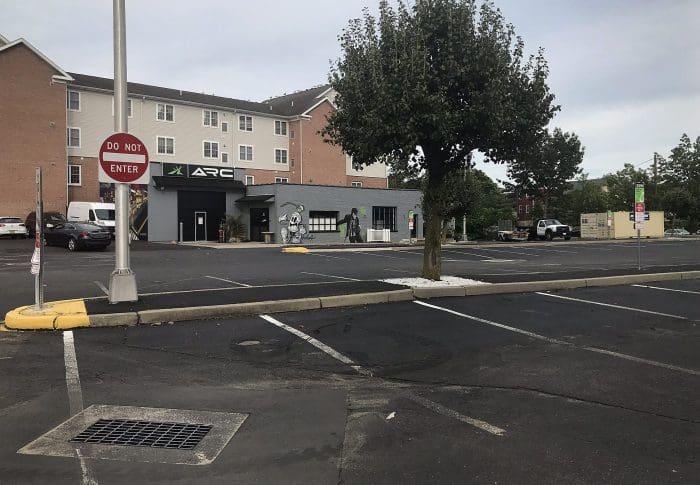 The latest court battles revolved around the plaintiffs’ demands that Milligan turn over documents revealing those involved in the various legal entities Milligan manages. The plaintiffs also sought to reopen their case in order to question Milligan. They said they had expected Milligan to testify in his defense because Rubin had indicated repeatedly that he would call Milligan to the stand. Instead, Rubin on Oct. 3 declined to provide the plaintiffs a list of witnesses. Five days later, he said he’d rest his case without calling further witnesses, court documents allege.

Lee granted the plaintiffs request to reopen the case to question Milligan. Lee also ordered Milligan to provide the documents but when the deadline came, Rubin instead filed a motion to reargue. Lee denied that request on Oct. 16 and the next day, the parties met for a mediation session.

Mayor Harry Rilling said that the plaintiffs had agreed to engage in mediation once “certain documents” were provided. On Tuesday, the Council discussed the lawsuit in an executive session that lasted about half an hour. Although the hearing had been set to resume Thursday and scheduled to continue for five court dates, that’s off, according to Coppola.

Two weeks ago, Rubin wrote that Milligan was concerned about the cost of the case.

“I told Jason that I believe it will cost him another $100,000.00 or so to put on his full defense in the preliminary injunction hearing,” Rubin wrote to Williams. “His first choice is not to expend those funds in connection with a stand-still agreement that he basically is willing to mediate and stipulate to anyway. Insofar as your legal fees have generally run about three times as mine have, the issue for the public parties is whether it is worth those taxpayer dollars to seek to re-open your case-in-chief for the sole purpose of calling Jason as a witness at the hearing. Clearly, Jason’s testimony, as well as the testimony of the other witnesses, could go forward in depositions in the actual underlying case, which would move us closer to a trial on the merits.”

“Milligan should hope that our case will not be ‘reduced to a claim for monetary damages,’ because if it is, then his bill will increase considerably,” Williams had written to Rubin. “We feel very good about our likelihood of ultimate success on the merits and all the other elements of our claims.  …  We had always planned to hold your client accountable under oath for his deceitful actions and we still plan to do so.  The facts are not good for him and they have not improved with time.  It is obvious to us that Milligan is desperately afraid of testifying and that is why he is doing everything possible to avoid it.  I don’t blame him for trying to avoid it – he has a lot to answer for.”

“I can understand why they would want to pretend it would be a big deal to talk to me,” Milligan wrote Tuesday evening. “Spoiler alert-I did not order the code red!”

That’s a reference to the movie, “A Few Good Men,” he said.

“There are so many important things that we should be talking about,” Milligan wrote. “Questioning me about a transaction that the details have been public for months and months would be fruitless. I have informed you and the public at large of my plans and intentions for weeks if not months before I closed on the properties in 2018. I closed on the exact day that I publicly stated that I would, and I have delivered on every claim that I have made about my plans.”

“They can talk to me under oath via a deposition, which they could have done any time within the past year and a half,” he wrote. “It is a waste of time and a distraction from the real solutions we should be focused on.”

I was 15 years old when the movie A Few Good Men came out.

Ironically I watched it at the Garden Cinemas. I think it was called Lowes Theater at the time.

What is the City’s end game here? We have never been told.

If they want Milligan to give the properties back to Olson what does that solve? The LDA is very clear that it really does not matter who owns the properties, just that whoever does follows the LDA plan. Besides I don’t think POKO the company is capable of following through with the plans as per the LDA without Ken Olson who passed away.

Milligan appears to be much more capable than the current POKO Company. So what does this lawsuit solve?

I’m no expert in this but the only one’s in default on the entire POKO issue is Citibank.

Can someone at City Hall please explain what we are being protected from.

In the movie A Few Good Men there is a dramatic courtroom scene where lawyer Tom Cruise gets Jack Nicholson to make a stunning admission of guilt.

My point to the reference is that there will never be anything close to this scene.