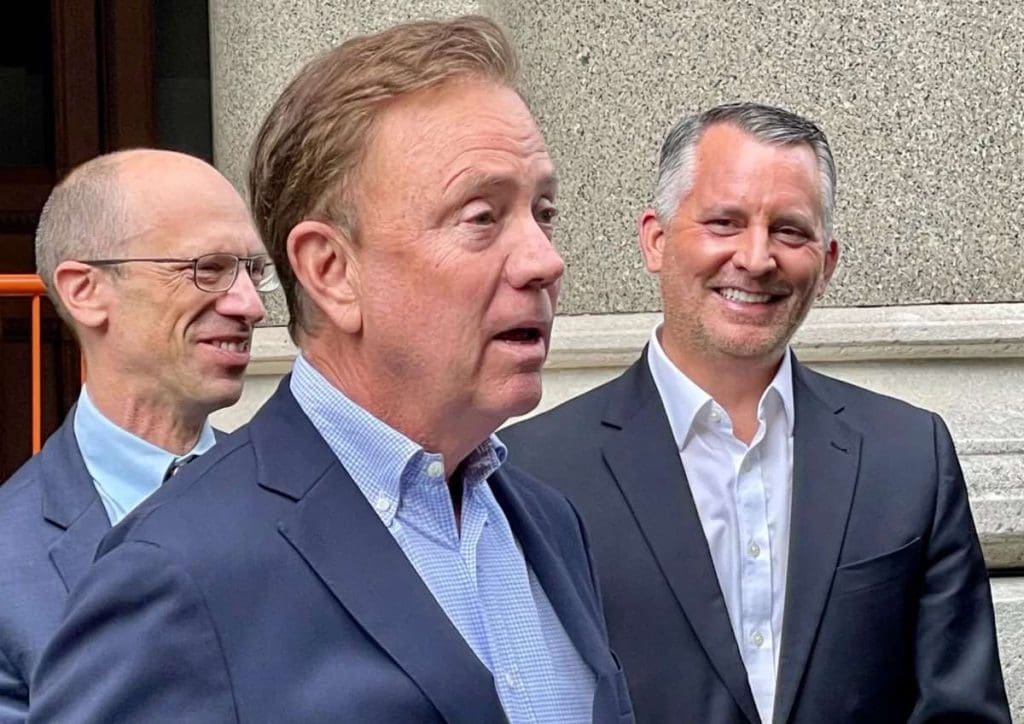 The Democratic ticket of Gov. Ned Lamont and Lt. Gov. Susan Bysiewicz will be on an unprecedented three ballot lines in November with the cross endorsement by a minor party committed to election reforms.

Lamont and Republican Bob Stefanowski sought the endorsement of the Griebel-Frank for CT Party, each pledging support for ranked-choice voting and other reforms aimed at tamping the extremes of contemporary politics.

“I think it’s a leap worth taking, no question about it,” Lamont said.

The party is named for Oz Griebel and Monte Frank, a Republican and a Democrat who petitioned for a spot on the 2018 ballot as a gubernatorial ticket, winning 54,741 votes —not quite 4% of 1.4 million votes cast.

It is now affiliated with the Forward Party, a national organization undertaking the difficult task of changing how Americans elect their leaders, seeking open primaries and ranked-choice voting.

Connecticut currently requires only a plurality, not a majority, of votes to win a primary or a general election. As a result, candidates can win nominations and elections with less than 50% of the vote.

Four years ago, Bob Stefanowski won a five-way Republican primary for governor with 29.4% of the vote. In some states, Stefanowski then would have had a runoff with Mark Boughton, the second-place finisher.

Ranked-choice voting is considered an instant runoff. Voters can check off second and third choices that come into play if the initial winner collects less than an absolute majority.One theory behind ranked-choice voting is it encourages candidates in a crowded field to constructively engage their opponents, not vilify them, in the hopes of being a voter’s second choice.

“We’ve seen how political campaigns often turn negative,” Frank said. “No one wants to see this happen. Ranked-choice voting changes this dynamic. It makes it so candidates benefit from being kind to one another on the campaign trail. It doesn’t mean they’ll agree. But since they’re all fighting for someone’s vote, whether first or second, it behooves them to put their best foot forward.”

“You can run hard left and hard right and attract the base,” Lamont said. “That’s not a great way to govern. And maybe it’s not as great in the general election. What ranked-choice voting does is opens up the dialogue between the candidates. ‘I don’t want to alienate the second or third choice. I’d like to be the second or third choice to some of those folks.’ I think it makes democracy better.”

Griebel, 71, died in July 2020, a week after being struck by a motor vehicle while jogging. He was a social moderate who had been a lecturer in classes Lamont taught at Central Connecticut State University.

If reelected, Lamont pledged to propose legislation next year that would authorize ranked-choice voting for federal races and give municipalities the option in local elections.

A State constitutional amendment would be required to allow ranked-choice voting in elections for State offices, Frank said.

Frank declined to say if Stefanowski also had pledged support in his interview for the endorsement, deferring comment to the Republican’s campaign. Sarah Clark, a spokeswoman for Stefanowski, said he was supportive of ranked-choice voting and open primaries.

Connecticut Republicans briefly experimented with open primaries more than three decades ago, and the current state chairman, Ben Proto, said he been urged to consider them again.

“I think it is a topic ripe for discussion in the state party,” Proto said.

David Jolly, a former Republican congressman from Florida who co-chairs the Forward Party, said Connecticut already has signaled an openness to coalition politics by allowing cross endorsements, an element of fusion politics.

By winning at least 1% of the vote for Governor in 2018, the Griebel-Frank party has a ballot line for governor in 2022, as do the Working Families Party and the Independent Party.

Malloy’s margin of victory in 2010 fell within the votes cast for him on the WFP line.

Lamont and Bysiewicz were cross endorsed by the Working Families in 2018 and again this year.

“While we’re both Democrats and proud Democrats, the Working Families Party is standing up for our essential workers,” Lamont said. “And we tried to do the same, and I think that was reflected in their endorsement of us.”

“We try to work across the aisle every chance we have and are strong believers in electoral reform. So you build a coalition — and that’s how you govern,” Lamont said. “You just don’t do it by yourself. And I think that’s what this endorsement means.”

Stefanowski did not testify last week in a one-day hearing on his request that Hotaling’s name be struck from the ballot. He alleges that violations of the minor-party’s bylaws at the endorsement caucus invalidated Hotaling’s victory.

The party’s chair broke a 79-79 vote in favor of Hotaling rather than order a second vote.