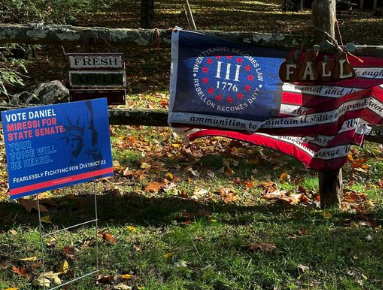 A photo Tweeted by Republican District 25 State Senate candidate Daniel Miressi, whose campaign sign is at left. At right is a flag representing Three Percenterism, an ideology identified as extremist, pro-gun and anti-government. Miressi said the placement of his sign next to the flag was “great.”

NORWALK, Conn. — Daniel Miressi, a Republican seeking to unseat State Senate Majority Leader Bob Duff (D-25), is calling Twitter remarks made by an active Norwalk Democrat “a desperate attempt to distract people from the issues in Norwalk to have them believe the ridiculous narrative that being a Republican means you want an insurrection.”

Last week, Miressi posted a photo of one of his campaign signs on a lawn, next to a flag used by some militia group members, affiliated with Three Percenterism. At least six Three Percenters were arrested for their involvement in the Jan. 6, 2021, attack on the Capitol, according to news reports.

Miressi, in the Oct. 27 Tweet, called the voter’s placement of his campaign sign next to the Three Percenters flag “great.”

Great sign placement from a supporter, THANK YOU! — We are one movement and one people: together we can change Hartford. Individualism. Liberty. Common Sense. November 8th, VOTE ROW B. @CTGOP #RedWave2022 pic.twitter.com/o08RWnqUaL

“So much for his back the blue … That’s not our flag, that’s the flag of The Three Percenters, anti government far right militia group. Known for gunning down law enforcement,” wrote Parkington, a Third Taxing District Commissioner.

In another Tweet, she quoted The Southern Poverty Law Center saying, “Three Percenterism is at its core a vanguard extremist movement…the decades-old antigovernment extremist movement, and have repeatedly led to violence against America’s law enforcement, citizens and residents.” 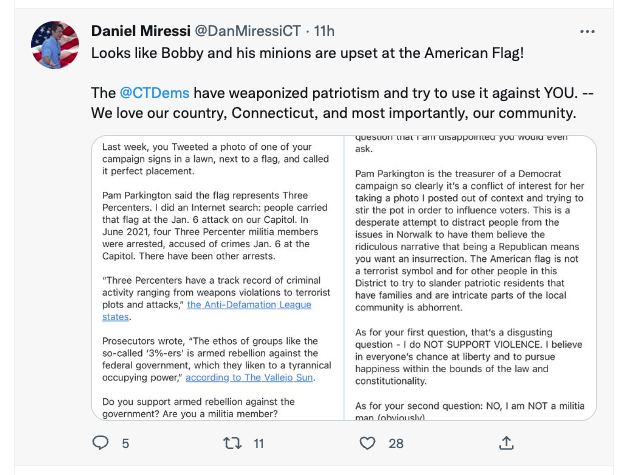 On Tuesday, after being asked about it by NancyOnNorwalk, Miressi said, “The American flag is not a terrorist symbol and for other people in this District to try to slander patriotic residents that have families and are intricate parts of the local community is abhorrent.”

He noted Parkington’s involvement with Johnson’s campaign and said “clearly it’s a conflict of interest for her taking a photo I posted out of context and trying to stir the pot in order to influence voters.”

He said he liked the sign’s placement there because, “The colors were complimentary to my sign of Red, White and Blue as it was next to an American flag.”

NancyOnNorwalk had asked if supported armed rebellion against the government. He called the question “disgusting.”

He said, “I do NOT SUPPORT VIOLENCE. I believe in everyone’s chance at liberty and to pursue happiness within the bounds of the law and constitutionality.”

He’s not in a militia, he said. 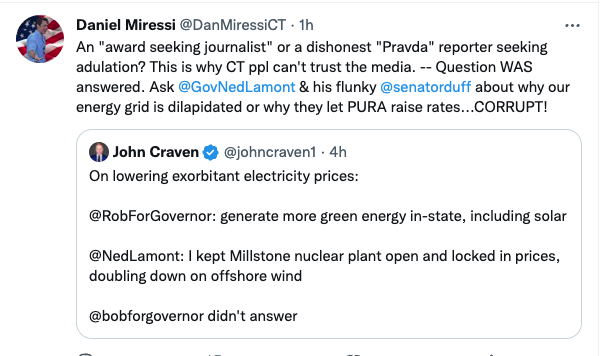 NoN asked if he believes the 2020 election results were valid, if Joe Biden is the rightful President.

“Joe Biden was sworn in as President and is sitting in the Oval Office,” he replied.

On Twitter, responding Tuesday to a Miressi Tweet, she said, “You still didn’t answer {NoN’s} questions. Do you think that Joe Biden is the rightful President? We know he was sworn in, but do you believe he is rightfully there? Do you think the election results were valid? Answer Yes or No, it’s that easy.”

“Though the media often refer to Three Percenters as a movement or a group, they are neither,” the Anti-Defamation League states. “Rather, they constitute a major part of the broader anti-government militia movement, whose ideology they share. Some Three Percenters form militia groups, while others form non-paramilitary groups or create online networks; even more are active as individual or unaffiliated Three Percenters.”

In the blue field where stars are featured in our nation’s flag, the Three Percenters flag states, “When tyranny becomes law, rebellion becomes duty.” Words on the stripes include, “A free people ought not only be armed and disciplined, but they should have sufficient arms and ammunition to maintain a status of independence from any who might attempt to abuse them, which would include their own government.” The flag calls this a George Washington quote; Mount Vernon states the quote has been manipulated contextually and some of the text is inaccurate.

“The name Three Percenters comes from a myth that only 3% of colonists rose up against the British, but that they were able to achieve liberty for everyone,” said Alex Friedfeld, an investigative researcher for the Anti-Defamation League Center on Extremism, according to ClickOrlando.com. 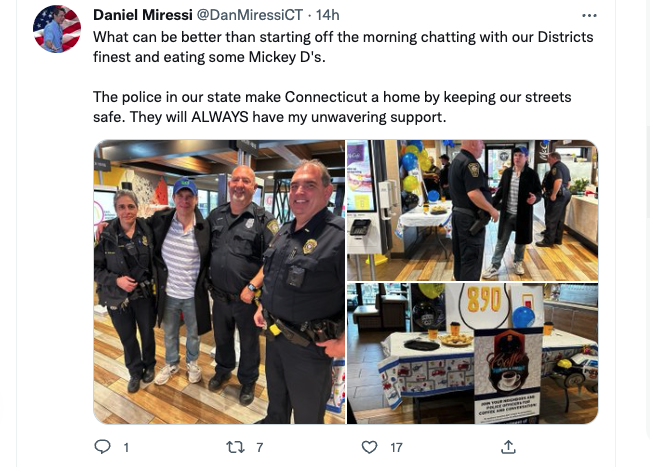 I’m not quite sure if there was “another”, true American flag present somewhere outside of the picture posted but for Miressi to say “he liked the sign’s placement there because, “The colors were complimentary to my sign of Red, White and Blue as it was next to an American flag.”” is perplexing to me. Last I knew there were 50 stars in the blue and no written words anywhere on my flag.

Perhaps this candidate should review the flag code:
https://www.military.com/flag-day/us-flag-code.html

The us flag should never be altered as it is by the three percenters of the thin blue line folks. Draping yourself in the flag is actually contrary to the respect for it as a symbol of our country. As a former scout leader, our scouts learn this stuff in 2nd grade….maybe they could help out some of the adults!

Either he is lying that he doesn’t know that this is a Three Percenters flag or he’s woefully ignorant. I’m betting on the latter if you go by his tweet feed.

Either way, he shouldn’t be representing the 25th District.

When people show you who they are, believe them.

Silly season is here. Maybe the “party of the environment” could take a leadership role here and get rid of lawn signs all together. A total waste of natural resources.

You’re misdirecting, Bryan. The point is that Miressi is allying himself with the Three Percenters.

No Ken, I’m not. However, you are making your point perfectly clear that some need to label and categorize everyone. Bob Duff raised a Hatian flag on his property. Haiti is one of the worst countries in the world for human rights. By your logic Duff supports the inhumanity there.