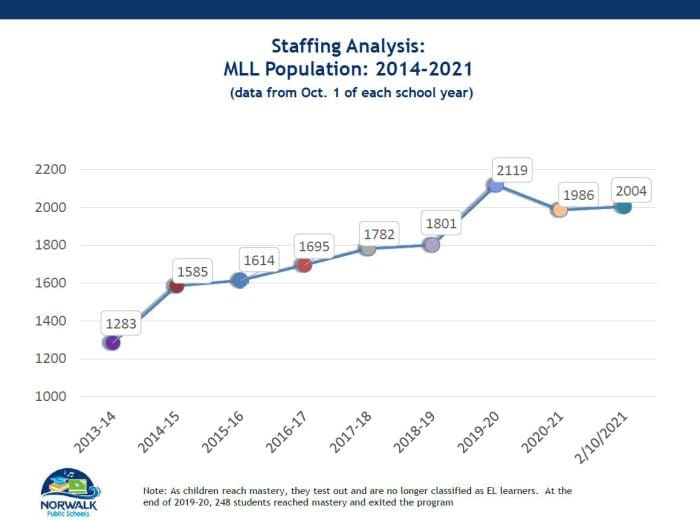 A chart from a Norwalk Public Schools PowerPoint presentation, prepared for the March 16 Board of Estimate and Taxation meeting. (Another page is above.) Commentary offered to the BET by Chief Financial Officer Thomas Hamilton is not available as it appears no recording was made.

NORWALK, Conn. — The Board of Estimate and Taxation held two meetings last week that should have been public. Neither was.

As a result, the public – and the media – missed out on any discussion that may have taken place regarding Norwalk’s share of the $1.9 trillion federal American Rescue Plan.

They’re at odds again, as Dachowitz has guided the Common Council toward a budget cap that the school district says will result in NPS making $5.2 million in cuts. Hamilton had promised to plead the district’s case on March 16, a meeting that was held – NPS has a PowerPoint presentation on its website – but not posted on YouTube. There was no agenda with a Zoom link, so the public could not attend either.

While both men have disavowed any tension between them after last year’s display, the document shows that Hamilton spent time on a Dachowitz accusation that hasn’t been mentioned since February, when NPS issued a statement calling Dachowitz “wrong.”

It presents data to show that yes, the multilanguage learner population decreased this year, after NPS added staff directly aimed at the challenges those children face. It adds that enrollment has been “greatly impacted by COVID,” but enrollment growth is expected as the world emerges from the pandemic.

“I did not realize that the BET review meeting was not recorded, and am unable to speak to the reason why. It seems like an unfortunate oversight,” Board of Education Chairman Colin Hosten said Monday in a email.

Hosten said he felt Superintendent of Schools Alexandra Estrella, NPS Budget Coordinator Kristen Karzcmit and Hamilton “did an excellent job of documenting how the District’s budget request has been pared down to the most basic needs, especially relative to the initial department requests and especially given the work required to equitably address the academic and social impacts of this past year on our students, not to mention the still-open question about a possible freeze in ECS funding from the state, and insufficient clarity on the extent to which federal aid can help address all of these issues (or what will happen when the aid runs out).”

Earlier this month, Hamilton said NPS hoped to get a sense of where the City stood at the meeting held last Tuesday, because school principals need to start working on their budgets.

“The members of the BET offered thoughtful questions and feedback, and I am grateful for their dedication and commitment to now confronting some tough questions in trying to address the various needs of the City and School District in the 2021-22 budget allocations,” Hosten said.

NoN asked Morgan, Rilling and Chief of Staff Laoise King if minutes from the meeting would be available. No one replied. Cheryl Telesco of Telesco Services, which does minute-taking for the City, indicated Sunday that she was unaware of the meetings. So the answer to the question appears to be “no.”

“The meetings were noticed in two different places on the website, but unfortunately the details didn’t get posted to the main meetings page,” Rilling said in a statement. “No actions were taken during these workshops, but they should have been posted more clearly online. It was simply a mistake – nothing more.”

Only one of the two website places referred to by Rilling lists the two meetings. There is no Zoom link.

Hamilton noticed the errors last week. There was a document advertising a March 15 meeting in Norwalk Concert Hall, disallowed under COVID-19 restrictions. He believed the public hearing would be held March 24, this Wednesday, but that wasn’t on the City website, he said.

“We’re a little confused,” he said.

Morgan said Monday afternoon that the public hearing is indeed Wednesday, but the city’s “meeting notices” page calls that meeting a hearing on the capital budget, not the operating budget.

Hamilton’s PowerPoint makes no mention of the latest federal bailout bill, the $1.9 trillion authorized by Congress this month.

These points and others are likely to come up at the public hearing.

Morgan said Monday afternoon that the city website page had been fixed.

Transparency and a bridge for sale in Brooklyn. What a crock of ….Funny how these 2 meetings are kept silent. The chair of the BET is responsible and should be forced to resign!

This is one of the most disturbing stories, stoked with arrogance from public servants, that I have read in a very long time.

This is becoming the theme of the Rilling Administration the past few years. Arrogance, lack of wanting the public involvement, disdain for community leader’s opinion, open hostility towards the BOE, not reopening the city hall fully and city employees having a lack of accountability. His Director of Finance is a nasty person and talks down to people. It is very sad. This has been what Norwalk has witnessed for the past few years. We all realize that the Mayor needs to keep the job to pay all the legal fees he has, but it should not be at the expense of taxpayers and the betterment of Norwalk – it is not fair to the future generations.

According to Mayor Rilling, the meeting was not open to the public due to an error.

Was the same error responsible for the lack of any minutes or recording?

Did our student population grow that much?

Mistake??? All meeting notices are required to post a notice of the meeting including date, time and location. Even if they go into executive session.

There are laws regarding the meeting process and posting time lines. This process has not changed in years.

Surely at least one of the many Mayors knows the procees.

The meeting was illegal and should be investigated by the state.

Talks of cutting sports, music are the tool Board of Ed uses every year to get the troops riled up.
I can’t believe they think the public is that stupid. But then again, maybe they do.

As the saying goes, “figures lie and liars figure…”

I was wondering the same, Bob Welsh.

You are correct @John O’Neill. The BOE always seems to aim their “cuts” at the kids programs every time they are asked to cut some fat to rile the folks up and protect their over bloated bureaucracy. And you are correct that they think the public is stupid and, when one considers the fact that the BOE is made up of elected officials, they might have a point.

schools are open Will city hall ever be open? Joke!

Bob Welch I agree with you. The recorder didn’t even know of the meetings! And no one stopped the meetings to say who is recording?

Hartford is fighting over how to spend the bailout funds. That is pretty much all one needs to know about how it will turn out.
The governor and his rubber-stamp legislature do not want to eliminate the “emergency rules” so expect more secret meetings.
Our previous governor wanted to use QUASI’S to avoid the mess caused by what passes for representaionl government in this state. They use executive sessions to concel theri activities from public scrutiny.
Expect more secrecy and mismanagement.

Could NON ask Mayor Rilling, Eloisa Melendez, Ed Camacho and Colin Hosten if Barbara Meyer-Mitchell was being taken down from her Facilities Chair position by the Mayor/DTC for being too vocal about the budget issues and getting in the way of their agenda, which was the reason why she resigned so abruptly? That’s the word on the street, and parents deserve to know what the heck is going on. It is unfortunate that our BoE has been so politicized.