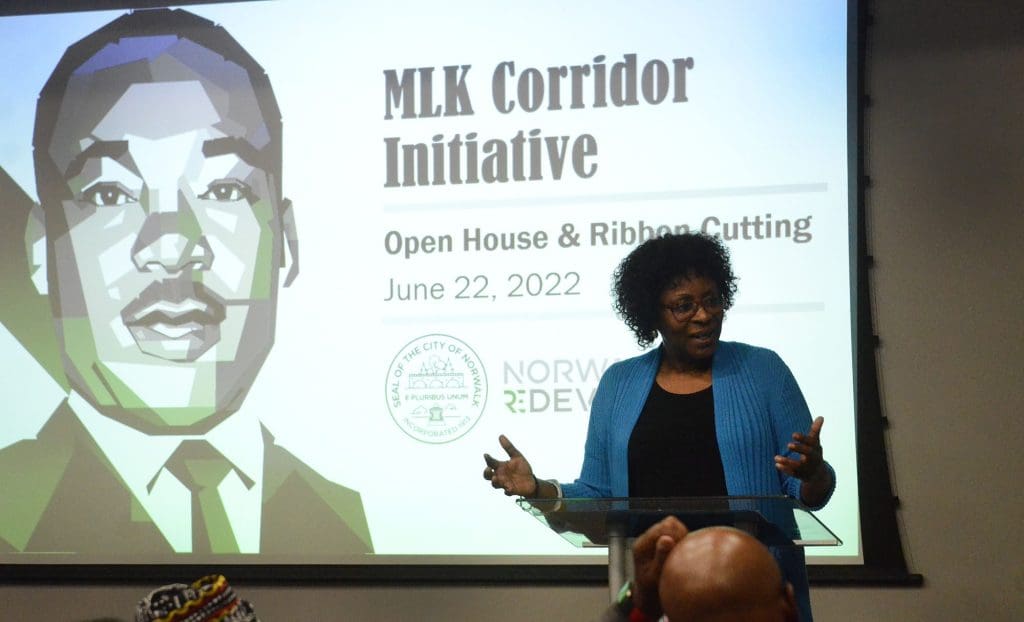 “Since 2019, the MLK Corridor Initiative identified more than $7.6 million priority investments in economic and community development, education, housing and safety improvement,” a news release said. “Subsequently, the City was able to secure critical funding that will address nearly all identified priorities.”

“The City has also committed $8.2 million in Citywide efforts from Federal funds through the American Rescue Plan Act that will enhance and benefit all residents of Norwalk, particularly South Norwalk residents,” the release said. 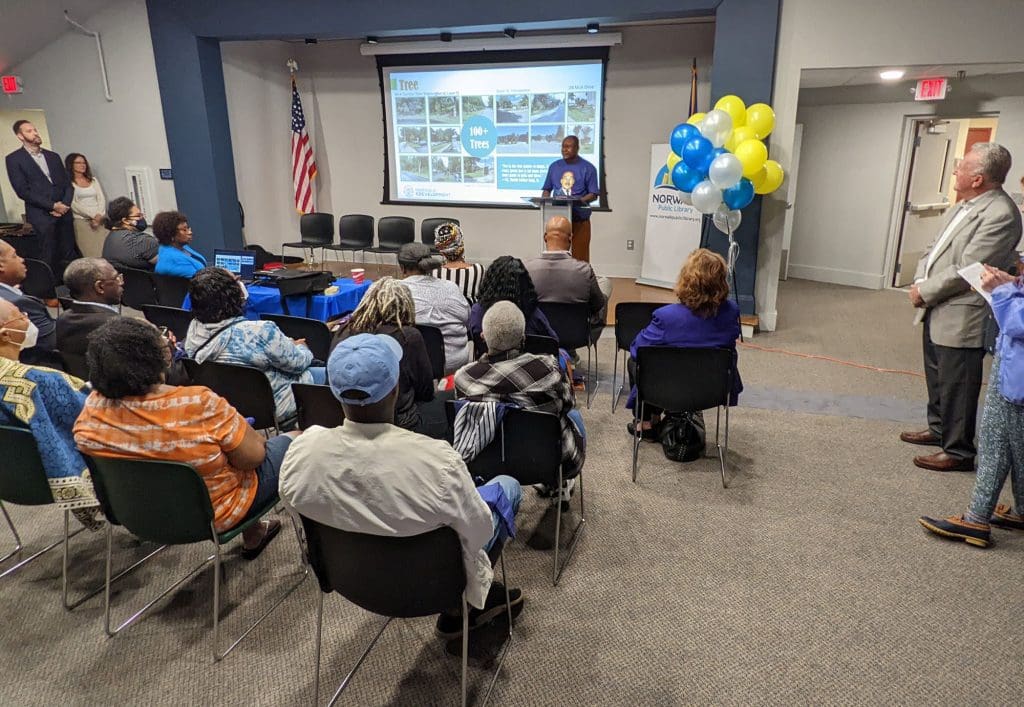 Wednesday in the South Norwalk library.

Three years ago, South Norwalk leaders began discussing their Martin Luther King initiative. It was a “a true collaborative effort,” that “really did start from the grassroots level,” Common Council member Darlene Young (D-District B) said Wednesday at the South Norwalk library. While it feels like five years, “And I have to say, when we finally came together with the City workers, so it was easy.”

“I’m just excited to see that we are finally at the beginning stages of something life changing for Norwalk for its people,” she said.

“The first program supports $1 million worth of residential facade improvements in owner and tenant-occupied homes. The second program is a first-time initiative for low-interest loans offered to residents in South Norwalk for home improvements including roof and window replacement, and other important mechanics,” the news release said. 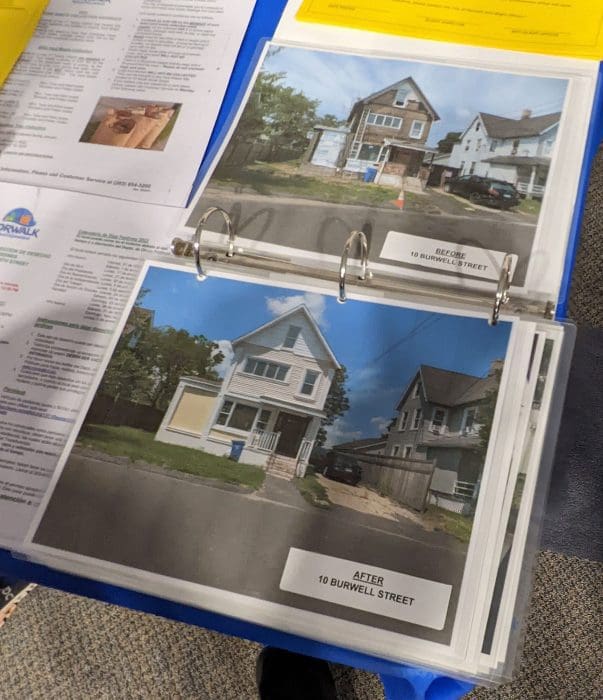 A display in Wednesday’s open house shows improvements made through blight ordinance enforcement.

“In November 2020, the Redevelopment Agency launched the MLK facade program,” with about $280,000 to spend, improving 13 homes, Norwalk Chief of Economic and Community Development Jessica Vonashek said at a January Council meeting. After learning in early 2021 that the City would get a $3 million State grant for the the MLK Corridor Initiative, “We came up with the list of 75 things worth $7.3 million, knowing that we only had $3 million to really move forward.” Given the ARPA funds and the GGP money, “We’ve been able to fund almost 90% of the priorities and goals that were identified through the group.”

She explained, “There were definitely four very strong focus areas that came out and one of them was housing improvements. The second was traffic mobility and connectivity. Third was green space and park improvements in a fourth was neighborhood safety and beautification improvements.”

At that point, the façade program expanded; $750,000 would go toward façade improvements at owner occupied and renter occupied dwellings, capped at $25,000 per unit or $100,000 per building.

“If someone needs a new boiler, someone needs new heating system, someone needs new electrical system, and there’s a health and safety issue, we have the ability, the Redevelopment Agency will have the ability to be able to actually lend out the $500,000 and then administer the loan over time,” she said. “We just feel like this is a huge step forward for the city of Norwalk. It’s not something that we’ve done before. And so we’re really excited about it and something that the MLK Corridor Initiative Committee felt very, very strongly about.”

“People all across Norwalk celebrating major improvements to South Norwalk through the MLK Corridor Initiative. This is ground up, not a top down and will make a real difference to families, children and businesses in the area,” he wrote. “… These are the type of investments I want to bring to Norwalk – they support the community’s dedication to safety, children, the environment, housing and business – they speak to the importance of people, the community and our collective effort in supporting each other.”

Throwing another bone so the democratic mafia party can secure the black vote?👎🏽 pardon my cynicism, after the city has destroyed all the older homes and affordable housing in order to build luxury apartments for all her New York wealthy connections! Wake up and smell the coffee and the Pot!😩💩 Pun intended!

If Norwalk Dems truly wanted to honor the life and contributions of MLK they might want to ask what they can do so most of our school kids graduate our City public schools meeting CT Education Dept standards ? Or they might want to get behind securing a 4 yr college for our City – the only one in CT without one.

Are Norwalk Dems concerned with our long standing 10% poverty rate ? Or modest number of Black owned small businesses ? Numbers of elected Black officials ? If Norwalk is touted as CT’s most integrated City then where are the efforts to encourage full “participation” in the City’s economic life by all of its citizens ? Rather than attracting more renters and developers ? Would our minority youngsters and all our youngsters markedly improve their future prospects with access to a Norwalk 4 yr college ?