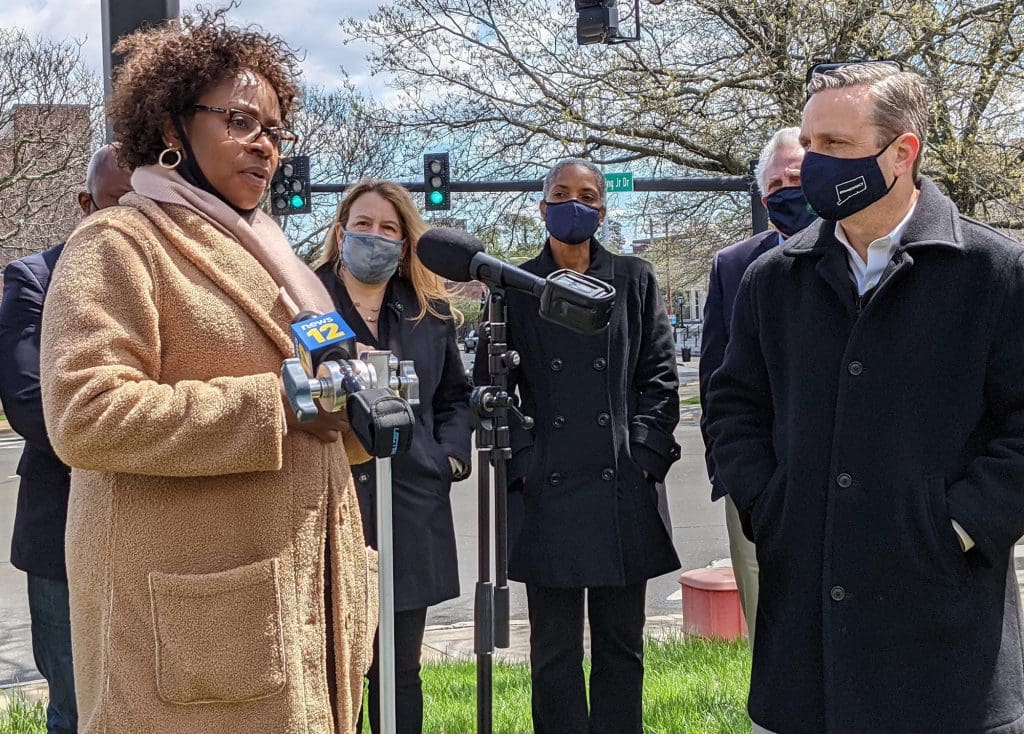 NORWALK, Conn. — South Norwalk is getting an upgrade, financed by a $3 million state grant aimed at honoring the late Martin Luther King Jr. by sprucing up the areas named after him.

The Martin Luther King initiative has been meeting for two years and now the group’s “intangible ideas (will) become tangible projects, and to really improve the sites of our city,” State Senate Majority Leader Bob Duff (D-25) said at a press conference called Thursday to highlight the funding.

“It’s not just limited to the Dr. Martin Luther King, Jr. Boulevard here,” Duff said, standing at a busy SoNo intersection. “It’s really an area around that which I believe will enhance property values, enhance pride in our community and provide an area that will really live up to Martin Luther King and what he stood for and his name and respect that we should have for somebody who did so much for our country.”

“Over the last couple of years, members of the Norwalk Martin Luther King, also known as the MLK Corridor Initiative, have been meeting and engaging in a healthy conversations about development within the MLK corridor,” said Clarke, chairman of the committee. “The MLK Initiative comprises both city officials, as well as community leaders and residents. We have met with the community, we have collected data, we have analyzed data collected, we have formulated recommendations for implementation. We want to see Norwalk… as a better place for Black, brown, and all people to live the American dream, a place of economic, housing, educational, and social equity.”

Young said the area affected extends to Bouton Street in one direction and Lexington and Meadow Streets in the other.

“We know that there’s development here and a lot of development is centered around the TOD (Transit Oriented District). And so our focus really is to look at those communities outside of the TOD that really need I think deserve to experience the changes at the same time,” she said.

“The hope is that, you know, in construction terms, that we’ll be able to get a shovel in the ground relatively shortly,” Curtis said.

“Our priorities focus on enhanced mobility, connectivity, safety, including but not limited to crosswalk insulation, sidewalk construction, streetscape, streetscape improvements, neighborhood cleanups, public art, playground investment and enhanced urban canopy and I know there are others as well, that’s just kind of a, you know, a shortlist of things,” Duff said.

“I look forward to the great changes and the beautification that’s going to happen in this area. I know it’s been long overdue, and I’m super excited about it as a person who’s been living here my entire life,” Simms said.

Young said, “This is the beginning of a new era for South Norwalk.”

It doesn’t get more disgusting than using MLKs good name to hide tax payer funded graft given back to the developers who should be using their own money to enhance the area, not ours.

Bouton Street has a quarter mile pile of contaminated waste surrounded by people with asthma. Tragic how money is being spent. We pay for the grant, money its not a gift. Thomas, Simms? Trees among 80 brownfields. Total incompetance.

This is what incremental change looks like. Small projects that make the places where we live nicer to look at.

Now, how hard was that?!? Harry should be taking NOTES!

let them eat cake, let them have bike lanes!