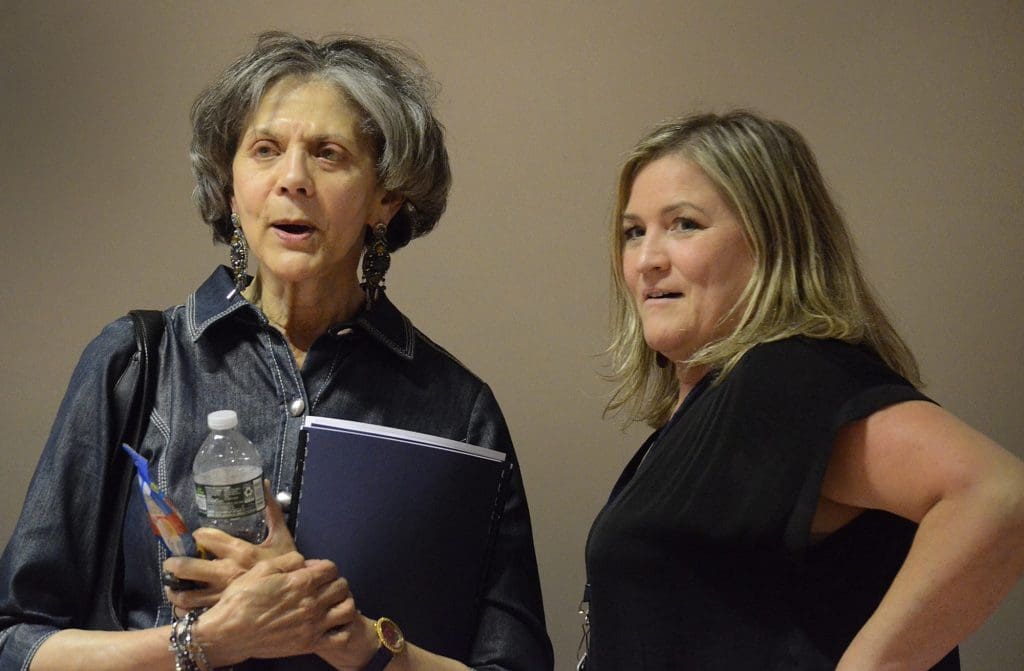 The allegations stem from Moore’s reassignment from West Rocks Middle School principal to NHS Assistant Principal position at the end of the 2017-18 school year, and ensuing actions taken by then-NPS Chief of School Operations Frank Costanzo in 2019 after Moore filed a complaint with the Connecticut Commission on Human Rights and Opportunities (CHRO) and the Equal Employment Opportunity Commission (EEOC).

Attorney Ryan Daugherty’s complaint uses emails written by former BoE Chairman Mike Lyons and other well-publicized actions in 2015-17 as evidence in alleging that racial discrimination led to Moore’s reassignment. Adamowski and Costanzo are accused of harassment, hyper-scrutiny, and retaliation against Moore.

Moore filed a grievance in September 2018, hoping to be reinstated at West Rocks, the lawsuit states.

The CHRO and EEOC complaints were filed Feb. 2, 2019. Moore received Notice of Right to Sue letters from EEOC on June 8. Daugherty filed the lawsuit Aug. 31.

Moore’s transfer from WRMS prompted parent protests at the time. Less public was her five-day suspension from NHS beginning on April 18, 2019, less than 60 days after she reached out to CHRO and EEOC, according to the lawsuit.

Daugherty alleges that Adamowski and Costanzo suspended her for opposing unlawful employment practices. Moore has suffered economically and emotionally as a result of their actions, he states.

Moore was born in 1945 and her replacement at West Rocks, Adam Reynolds, was under 40, the lawsuit states.

Two years ago, Daugherty’s firm filed a class-action lawsuit against the Board of Education alleging wage theft, resulting in a $400,000 settlement in October. He’s also representing Norwalk Branch NAACP President Brenda Penn-Williams in a lawsuit alleging that Adamowski and NPS discriminated against her when her employment as a substitute teacher was ended in October 2018.

Moore had been principal at WRMS since 1998. Her labor issues with NPS are longstanding, and include four letters of reprimand between 2009 and 2016. The latest, issued by Adamowski, charges her with insubordination in her actions stemming from the middle school redesign program.

Moore challenged that reprimand. Arbitrator Leslie Williamson, Jr., upheld the accusation of insubordination but said no persuasive evidence showed Moore had exceeded her boundaries in discussions with parents about the redesign. There was “nothing in the record to indicate that Dr. Moore was intimidating staff,” Williamson wrote, according to the lawsuit.

The new lawsuit as evidence cites Lyons’ emails, revealed by attorneys representing former Special Education Director Christina Fensore in a now-settled defamation lawsuit. As the Board of Education worked to select a new superintendent in 2015, “many” of the African American members felt a Black candidate was more qualified than Adamowski, the lawsuit alleges, citing an email written by Lyons to allege that race was a factor.

“This settles it for me; I don’t care how much the Trio want a black superintendent, we need a certified ball-buster in here (Adamowski) to clean this shit up,” Lyons wrote.

That email was sent after the Board of Education learned it had an unexpected $500,000 in Special Education costs.

Lyons and other Caucasian BoE members wanted certain principals out, but former Deputy Superintendent Tony Daddona had given all the principals exemplary reviews, making it hard for Adamowski to get rid of the few principals the BoE members objected to, the complaint continues. Lyons specifically mentioned Moore as one of the “four horsemen,” a derogatory nickname used by the BoE reformist cabal, and cited her relationship with “The Trio,” BoE members Rosa Murray, Shirley Mosby and Migdalia Rivas.

The emails show that Lyons and the other four Caucasian Board members, Adamowski and Costanzo “were all conspiring together to terminate or demote” Moore at that early May 2015 date, the lawsuit states.

Moore’s WRMS students “outperformed Nathan Hale and Ponus Ridge in every statistical category, and outperformed everyone, including Roton Middle School, in its percentage of students on track to graduate,” the complaint states. “Plaintiff should have been rewarded rather than demoted. Plaintiff was demoted before the Connecticut State Department of Education Next Generation Accountability Report was released for the 2017-2018 school year.”

In 2018, Wilcox Williams said Adamowski’s decision to remove Moore “was made following a thorough investigation, which concluded that the district’s efforts to improve instruction through the middle school redesign program would not be implemented effectively at West Rocks with Dr. Moore as principal.”

On March 27, 2019, after Moore had filed complaints with CHRO and EEOC, Costanzo scheduled a meeting with Moore to discuss a complaint from a School Resource Officer, while refusing to divulge specifics of the complaint, the lawsuit states.

Moore specified that she’d have union representation and on April 1, 2019, arrived for the scheduled meeting expecting NASA Vice President Tony Ditrio to be there, but instead sat waiting in the lobby for half an hour, texting him and keeping Costanzo’s executive secretary informed about the situation, according to the lawsuit.

Finally, after an additional five minutes, Moore asked the secretary “if she felt comfortable” telling Costanzo she was heading back to the school because she couldn’t reach Ditrio, the complaint states. The secretary said she was “comfortable” doing that and slightly later that afternoon told Moore that Costanzo would “clear his calendar” to reschedule the meeting.

Ditrio finally got back to Moore after she’d left. Minutes later he sent Costanzo an email, apologizing and asking to reschedule, the lawsuit states. Costanzo didn’t reply.

Instead, the next day, Costanzo sent Moore a memo “advising her ‘termination of your employment is under consideration based upon your failure to attend a meeting yesterday for which you were directed to attend,’” the lawsuit states.

Moore explained in person, but was subsequently suspended for five days, the lawsuit states, alleging that Constanzo and Adamowski “had never (before) suspended an administrator because their union representative couldn’t attend a meeting and wanted to reschedule.”

Moore seeks punitive and compensatory damages, attorneys’ fees and reimbursement of wages and back pay. The federal courts website indicates that a demand of $250,000 has been recorded.

The “four horsemen” included two white people, but when it’s all about the kids one must sue and take money away from the kids.

Sadly our BOE has long had a “reputation’ for being involved in costly litigation ultimately paid by City taxpayers. With a Superintendent paid $300+ – tops in CT – ought we not expect more reasonable legal outlays like other CT school systems ?

There are a number of West Rocks parents who actually thought about suing Moore for Reverse Discrimination…I wish she was as good at administration as she is at suing..In my opinion we should sue the person who named her principal in the first place.

Dr. Moore makes a substantial amount of money as a housemaster. How does one sign up for that type of discrimination? I bet a long line will form.. Havent we seen this show before?

Why is it that as the decades go by Norwalk’s BOE is involved in costly litigations that our surrounding towns and most other CT towns and cities manage to avoid ? Our surrounding towns have no problems electing citizens with business and management backgrounds who manage to oversee well functioning public schools. Here in Norwalk we have different “standards” and reap the costs. Reportedly using National Search Firms to secure Supt’s and top administrators isn’t well received by our BOE. While our City leaders look the “other way”.
And if according to CT Edu Dept’s website most of our kids graduate not meeting CT standards on math and science well that’s just something we can’t do anything about. Because our BOE isn’t meeting their responsibilities. If we’re blessed with a One Party governance lets encourage higher standards. Otherwise its the same old endless litigation. How does that benefit us or our kids ?

The interminable saga of Lynne Moore and her time in the Norwalk public school system has taught us at least one thing — the system is a rat’s nest of incompetence and bureaucratic sclerosis.

The saga goes back more than a dozen years, through at least four different superintendent administrations, and piles of taxpayer money for lawyers. It was launched in 2009 when Moore received her first letter of reprimand for insubordination over her disinclination to abide by normal rules of conduct for school administration officials. In subsequent years, three more such letters piled up in her employee file.

A letter of reprimand is no small thing. It is delivered only after painstaking study and legalistic rigamarole. Yet Moore managed to rack up four of them before finally being penalized. And then she was merely demoted — not fired. She went from principal at a middle school to assistant principal at a high school. Moore is also (lucky us) now chairperson of the union that represents school administrators.

With the latest of her never-ending string of complaints and lawsuits against the BoE and the City, Moore now drives the school system deeper into racial and ethnic divisions. It seems she is being helped, unfortunately, by Nancy’s slanted reporting. Nancy reports, for example, that the BoE members who favored Steven Adamowski for superintendent back in 2015 were a “cabal”. A cabal, as Dictionary.com defines it, is “a small group of secret plotters, as against a government or person in authority.”

Here, unfortunately, is it also necessary to point out that Adamowski is white, or in Nancy’s reporting, Caucasian. That was not acceptable to BoE members who wanted race to be a deciding factor — if not the deciding factor — in the appointment, and Adamowski was the “wrong” skin color.

Here Nancy also delves into a private email that surfaced, in which former BoE chairman Mike Lyons used some salty language to describe his own deciding factors. He wanted “a certified ball-buster in here (Adamowski) to clean this shit up.” Worth noting that he did not specify any race or ethnicity. (Although in Nancy’s reporting it did make him part of a “cabal.”)

Apparently, in Nancy’s view, being part of a school reform group turns you into secret plotters against authority. But fighting against reform in a school system that badly needs it? That makes you a victim.

Nancy also omits some critical information she should be well aware of. She writes, “Lyons and other Caucasian BoE members wanted certain principals out, but former Deputy Superintendent Tony Daddona had given all the principals exemplary reviews, making it hard for Adamowski to get rid of the few principals the BoE members objected to [according to the complaint]. Lyons specifically mentioned Moore as one of the ‘four horsemen’.” The clear implication is that the “four horsemen” were all non-Caucasians. In fact, as Bryan Meek points out in an earlier comment, two of them were white males.

But that implication helps to bolster the impression that Moore was the victim of racial discrimination. And yet, as Nancy should know, the reform group used the term “horsemen” to describe four entrenched NPS bureaucrats who were fighting against reform efforts. Two of the “horsemen” were not only white males, two also happened to be school principals.

So, was Lyons (a white male himself) racially discriminating against fellow white males? Or was the term “four horsemen” (a reference to the Biblical “four horsemen of the apocalypse”) used simply to describe obstructionists, regardless of race or ethnicity? Obviously, it’s the latter — context matters.

Long story short, expect the saga to continue, with no end in sight and, sadly, becoming more drenched in irrelevancies over skin color. Quite a lesson for our school kids.