Patricia Srenaski, Emergency Management Program Manager at Hartford HealthCare, gives a Moderna COVID-19 vaccine to a Hartford firefighter at the Connecticut Convention Center, Wednesday, January 13, 2021. HHC vaccinated several Hartford first responders to promote the vaccine. They are also vaccinating people who are 75 and older at the Convention Center by appointment. (Cloe Poisson, CTMirror.org)

More than 50 percent of Connecticut’s population between the ages of 12 and 15 have now been vaccinated, according to the governor’s office, but new data released Thursday shows the state is continuing to see an increase in COVID-19 cases.

Gov. Ned Lamont’s office reported an additional 295 cases Thursday out of 13,270 tests, which amounts to a 2.2% positivity rate. The percentage has not been that high since early May, according to state testing data. The state’s seven day average for positive cases stands at 1.82%.

Connecticut has one of the highest vaccination rates in the country and particularly high vaccine coverage among people who are over 65 years old. 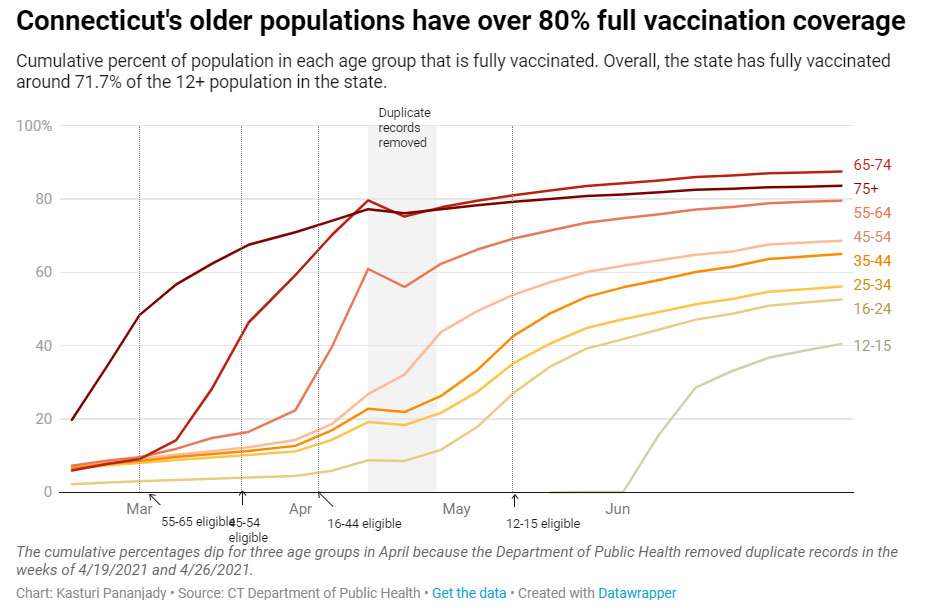 But medical professionals in the state are voicing increasing concerns about the continued transmission of the virus among the state’s remaining unvaccinated population, especially as new variants of the virus, such as the Delta variant, take hold here.

“This is becoming a pandemic of the unvaccinated, right now,” Ajay Kumar, Executive Vice President and Chief Clinical Officer for Hartford HealthCare, explained during a news briefing on Thursday.

Kumar specifically noted the number of cases being linked to the new Delta variant. That variant, Kumar said, has been shown to spread more rapidly, and as a result, it could pose a more significant threat to individuals who have avoided vaccination to this point.

Kumar urged unvaccinated Connecticut residents to seek out the vaccine this week. Without that inoculation, he said, people are putting themselves at a much higher risk of hospitalization or death due to COVID-19.

As of Thursday, roughly 66 patients with coronavirus were hospitalized in Connecticut, which is similar to numbers the state experienced in the summer of 2020.

And so far this week, Connecticut has reported more than 583 cases, and four more Connecticut residents died as a result of the virus, according to data released Thursday.

Still, by comparison, Connecticut is fairing far better than other parts of the country at this moment. For instance, Arkansas, which has fewer people than Connecticut, recorded more than 8,000 cases in the past week and there were more than 334 people with COVID-19 in intensive care units in that state.

When asked about the climbing COVID rate this week, Gov. Lamont specifically noted the comparison between Connecticut and Arkansas, and he credited the different outcomes to the relatively higher rate of vaccination in Connecticut.

During the same press conference, Lamont was asked whether he would consider new incentives for people who have been hesitant to accept a vaccine. Other states have given away trucks, vacation packages and cash prizes in an effort to lure more people to line up for a shot.

Lamont said people should already have all the motivation they need given the life-saving potential of the vaccine.

Why do we continue to fear monger? 2.2% positivity rate is well below 5% the State was seeking in order to open back up. 583 cases this week in a state with a population over 3M. Are CT patients receiving the ivermectin or HCQ? It’s been proven since Donald Trump left office that these interventions work. “Recent research has confounded the belief, held for most of the past 40 years, that ivermectin was devoid of any antiviral characteristics.” (https://pjmedia.com/columns/stacey-lennox/2021/06/28/in-covid-19-claims-of-scientific-consensus-about-anything-should-raise-skepticism-n1457814)

None of it matters though because here comes the monkey virus…