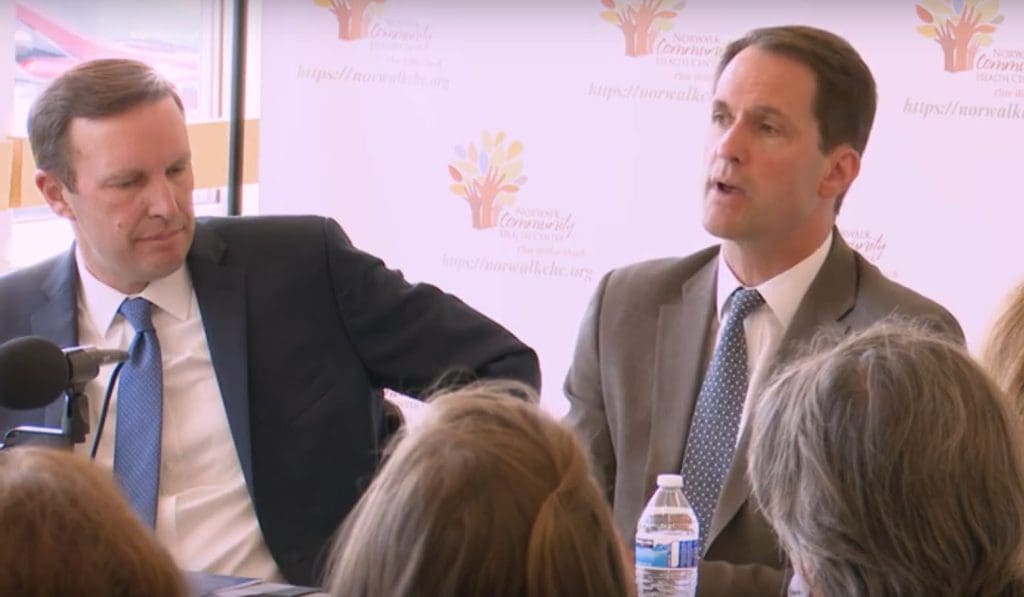 NORWALK, Conn. – Your story about healthcare might help save the Affordable Care Act,” Chris Murphy and Jim Himes said.

“Unfortunately, the Trump administration has done everything in their power to sabotage our health care system and weaken {the protections provided under ACA},” Murphy, U.S. Senator states on his website. “They tried dozens of times to repeal the ACA it in Congress and they recently took their attempts to the next level by signing on to a lawsuit that would invalidate the entire law.”

If the lawsuit is successful, “to Connecticut that is humanitarian disaster because that means hundreds of thousands of people lose their healthcare insurance and every healthcare insurer is once again allowed to kick you off based on your medical history. We just could not survive that as a healthcare system in Connecticut if that were to happen,” Murphy said at a recent event in Norwalk.

Murphy and Himes, a Congressman, held the event to draw attention to the ACA struggle and collect stories from those who have been affected.

“Since we are in the fray every day, we wanted to just convey … how much in jeopardy the gains made by the Affordable Care Act are, and then we really need to hear your stories,” Himes said at the Norwalk Community Health Center.

The Democratically-led House has passed bills to preserve “essential” ACA elements but they’re not going anywhere in the Republican-led Senate, he said. “But that could change with enough pressure,” when people realize that ACA could go away should the lawsuit be successful.

Before ACA, women were automatically considered to have a pre-existing condition because they could get pregnant, according to Himes.

“We are in jeopardy of going back to a world where fewer people have insurance, where women, and anybody with a pre-existing condition pay an awful lot more – unaffordable, quite frankly, for their premiums… It’s enormously powerful for us to be able to go back to Washington …and tell real people’s stories, explain what will happen on the ground if some of these measures succeed,” Himes said.

A woman at the June 6 event went on to explain that her 7-year-old daughter is being treated for migraines and, “It just floors me that at 7 she has a preexisting condition for which she could be denied coverage for in the future.”

“I am a trained attorney. My daughter is smart, she is excelling in school. She wants to participate in this economy… she is going to want to get a job,” she said, calling it “stupid economics” that her family could lose their health insurance if her husband were to get laid off – and she’s fighting breast cancer – and that her daughter might not get the support she needs.

Another woman said wellness exams can lead to cost savings, and under ACA they are provided. Children are sometimes diagnosed with behavioral issues when it’s hearing or vision issues causing problems.

Crone’s Disease often requires “really expensive medication,” said a woman who called herself lucky because her husband has great health insurance, but, “He was the one who suffered, he couldn’t change jobs.”

She suffered for years before being diagnosed with Crone’s and then medication helped, but she was about to hit the lifetime limit for treatment when the ACA kicked in, she said. “You don’t realize the impact (serious illnesses) have because people do have good medication. You see people on the street, and they are productive citizens, and that’s the way we need it to continue.”

Murphy encouraged people to go to his website and submit their stories.

“We do share stories if you permit us to, on the floor of the Senate, different forums in Washington,” Murphy said “… Don’t take for granted that you are preaching to choir with the delegation. Write us, email us, call us.”

Senator Murphy can’t say “we” when talking about Connecticut’s lousy ACA offerings. Murphy gets his gold plated, tax-payer subsidized ACA plan in DC; DC has a myriad of plan and company choices. Murphy lives in DC, kids go to school in D C, he visits Connecticut. Not sure what multi-millionaire, Greenwich resident Himes does for insurance.

I’ll have to admit, these two love to hold forums at extremely safe spaces

If these two useless panderers ever did anything to bring businesses and jobs to our state or God forbid address one of the worst transit corridors on the face of the planet, I might just walk across CT.

ACA is the worst piece of legislation in human history. Besides discouraging people from entering the health care fields, it punishes research and development, and why on earth it usurped the college loan industry making college more unaffordable than ever is something journalists seem incapable of asking.

I’ve occasionally sent e-mails to Murphy. Each time I did, I was required to fill in a detailed template, and then I received an incessant flow of e-mails soliciting campaign contributions.

This problem isn’t limited to any one politician or party.

Most-if not all-members of Congress devote most of their time and resources to getting elected and staying elected. As for legislation, they maintain the rigid postures expected of them by their larger contributors. The Citizens United decision sealed the deal, and almost nothing gets done.

Let’s get this straight now: Americans have been penalized for not buying overly expensive insurance for coverage they’ll never need, but illegals immigrants will get insurance for free? So, Senator and Congressman, my question is, how on earth is that fair to the people you’re supposed to represent?

Why are these politicians along with the rest of the left holding millions of individuals from the liberty to choose their healthcare plan and continue to double down on the failure of the “one size fits all” Obamacare/ACH? The free market must be unleashed to quell the spiraling health insurance inflation. For the many who received the freebie Obamacare, millions were priced out of the market .
It is also obvious these politicians don’t represent the middle class. I’ll keep my fingers crossed that the law get struck down once and for all this year.

Rep. Himes’s vote for the ACA has cost my family over $50,000 in increased premiums just so we could keep seeing our doctors and keep equivalent insurance policies.

Obamacare let the insurance companies triple the costs to all the people in the individual market who were paying their own way.

It was the biggest statutory cash rip off since the 1930’s depression when the government let the banks close and erase the savings of all the people like my grandparents. They lost all their money in the bank overnight.

And so this is the reason why we got the Tea Party and now, finally, President Trump. God always takes care of this country!

They are both a joke. How much does insurance cost them??? Zero!