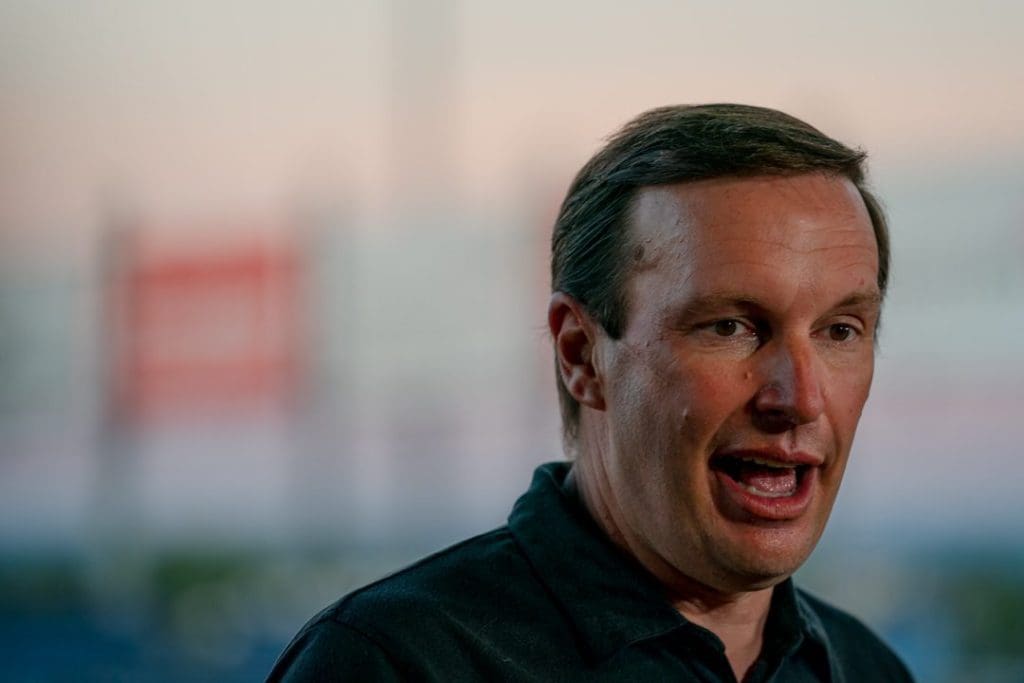 Sen. Christopher Murphy talks to the media before the Democratic National Convention on Thursday, Aug. 20 at Dunkin’ Donuts Park. Sen. He says is troubled by the idea of philanthropy funding government obligations like education. (Yehyun Kim, CTMirror.org)

When officials rely on philanthropy, rather than taxing the wealthy, to fund a core public function like schools, the result is an elite few having far more influence than the average taxpayer — which rarely ends well, regardless of how laudable the goals, the Democratic senator said.

“When it comes to how dollars are spent through government, no billionaire should have more say than my poorest constituent,” Murphy told author and columnist Anand Giridharadas in an interview published Sept. 15 in The Ink — an online, public affairs newsletter.

“We’ve got folks who want to be very generous with their billions, but they want to have a big say in how their money is spent on good causes,” Murphy said. “I still believe in one person, one vote.”

Murphy, who discussed his comments Thursday with the CT Mirror, said they were offered in reference to Dalio, the founder and former CEO of Westport-based Bridgewater Associates, the world’s largest hedge fund.

Dalio and his wife, Barbara, backed out in May from the Partnership for Connecticut following media reports that they sought to remove the group’s CEO before state officials involved with the venture had been informed.

That incident was just one of a string of controversies that followed the partnership since Barbara Dalio first announced the couple’s unprecedented offer in April 2019. The Dalios pledged to contribute $100 million over five years to help low-performing districts provided the state matched that investment and worked with the Dalios to raise another $100 million in private contributions.

But just two months later, as legislators were poised to vote on the deal, they learned the Dalios wanted the partnership exempted from state disclosure and ethics rules.

The exceptions were granted despite objections from news media, open government organizations and a statewide parent advocacy group. Significant portions of the partnership oversight board’s meetings were held behind closed doors.

When news of the attempted firing of the CEO broke in May, the Dalios accused some lawmakers and journalists of trying to sabotage the partnership.

“It has become clear that it’s not working because of political fighting,” Barbara Dalio wrote in a statement. “I am not a politician and I never signed up to become one. I only want to help people. Through this experience I’ve learned about our broken political system and I don’t see a path through it to help people.”

All of the conditions tied to the Dalios’ pledged contribution “probably created more trouble than it was worth,” Murphy added. “And I think that’s the conclusion everybody came to.” 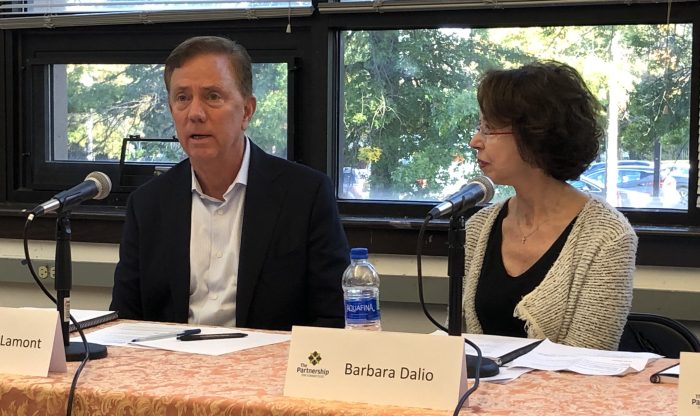 Gov. Ned Lamont and Barbara Dalio at the first meeting of the Partnership for Connecticut in the fall of 2019. (Courtesy photo)

The Dalios earned praise in many school districts prior to 2019 for funding several smaller initiatives to help improve graduation rates, and Murphy said their vision for Connecticut schools was the right one. Even with the partnership gone, the couple has said they still will contribute $100 million to assist the state’s struggling schools.

“I didn’t have any beef with what the partnership was trying to do,” Murphy said. “I just think that … it’s better for us to get public wealth into good causes through taxes instead of through donations.”

But that runs counter to the philosophy of fellow Democrat Gov. Ned Lamont, an opponent of making Connecticut’s tax system more progressive. The governor, who insists higher tax rates on the rich would prompt them to flee the state, often argues that fostering more philanthropy from the wealthy is a better solution. For example, Lamont has denied nonprofit social service agencies’ frequent requests for a major hike in state support, instead urging them to step up their private fundraising efforts.

Lamont, who championed the partnership, also repeatedly defended the exemptions from disclosure and ethics rules upon which the Dalios had insisted.

One day after announcing the Dalios’ intentions to dissolve the venture, Lamont warned he still planned to collaborate with talented and wealthy private citizens — and was prepared to bend certain rules to accommodate them.

“I was one of the first non-politicians, more of a business guy, in a long time here,” Lamont said on May 20. “And I really wanted to get the private sector — big business, small business, academics, not-for-profits — more invested in their state.”

And the governor added that these talented private citizens were “folks who weren’t used to having every email scrutinized by the public.”

Lamont’s communications director, Max Reiss, noted that once the coronavirus pandemic began, the Dalios provided 60,000 laptops to children across the state.

“Now, Connecticut students are as prepared as any in the country for the uncertainty of the school year for learning from home,” Reiss said. “We need to welcome Connecticut residents to the process who are solution-oriented, want to work directly with local decision-makers and families and want to help.”

A representative for the Dalio Foundation did not comment Thursday.

But with income and wealth inequality at their most extreme since The Great Depression, both nationally and in Connecticut, Murphy said he also expects the Dalios’ offer won’t be the last of its kind in the years to come.

“When you have people with this much money, they obviously have the flex to spend it on different things,” Murphy said, adding that states and the federal government are squeezed for cash, in part, because so much wealth cannot be taxed.

“No matter how good-hearted the goals are on behalf of a wealthy donor, does it makes sense for one person or one family to have more influence over the expenditure of taxpayer dollars than any other voter?”

Murphy is exactly why the federal government would get out of the education business. Let local governments and school boards run their schools, and let their local taxes and private donations finance them. Federal and state level financing are just added layers of administration (and associated expenses) that take away from actual education).

Very funny story Senator Murphy. Do you answer the call from your biggest donor or the person on welfare? Who influences your decisions my man. Show me a senator with shallow pockets.

Murphy is right. the money should be donated unrestricted or not at all.

Dalio wanted to leave CT like Paul Tudor Jones. Dalio was granted a 400 million dollar tax write off to stay. Lamont offered the tax deal in exchange for the philanthropic gift of 100$ million w/ matching. They did not want it subject to State Ethics. In secret. Dalio took the write-off and reneged on the gift? It should be criminal but it is legal. That’s why he runs the largest hedge fund in the world. He saw $$ on the ground that Lamont dropped (your money)and picked it up. Arbitrage and he donates to every Dem count the number of fund raisers at Grace Farms. Look at OXY, 112 million. Pay for play void of ethics, bank on it. Executive decisions by a Dictator in a one party Sanctuary state. Lamont just paid an 18 million dollar bribe to BLM Stamford. See you in court, Fst cv 20 502-3122-s. The judge is in on it. Now the FEDS are looking. Wait for it, stayed tuned.