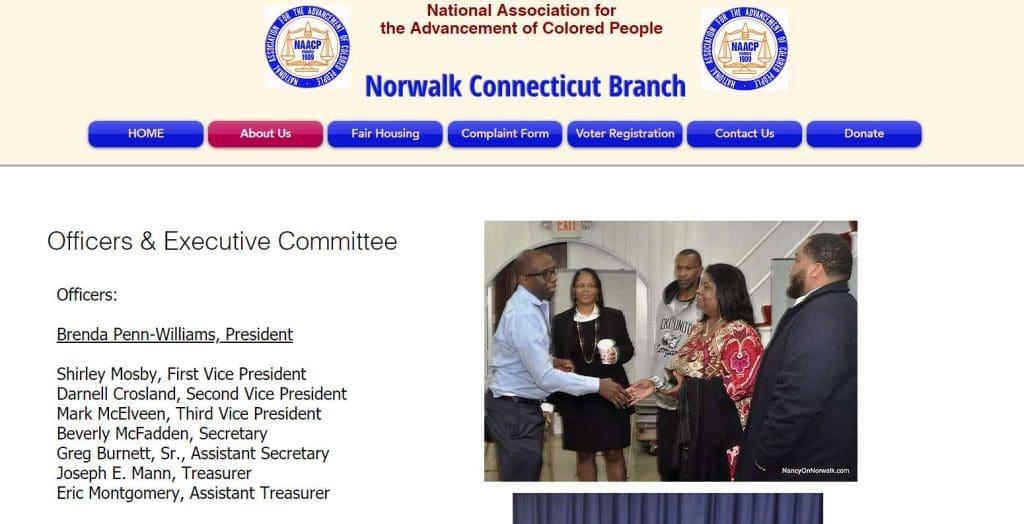 NORWALK, Conn — Norwalk NAACP members are experiencing voter suppression in the organization’s delayed election of officers, according to a petition emailed to NancyOnNorwalk by a person requesting anonymity due to fear of retaliation from NAACP President Brenda Penn-Williams.  Penn-Williams, who is grieving after the sudden death of her husband on Jan. 20, declined to comment for this article.

The petition, which provides evidence supporting  the account it offers,  lists 128 names.  NancyOnNorwalk reached out to all of the names on the list; five confirmed they signed it, three said they did not, and the others did not respond.

Norwalk Branch NAACP was expected to hold its election one week after the general election, as is the established tradition. But in September, the State NAACP took over the election and it was postponed.

Jalin Sead, who is seeking to oust Penn-Williams, is among the members who acknowledged signing the petition. In November, Sead said multiple people asked the State NAACP to oversee the Norwalk election so it would be fair and impartial. Penn-Williams disputed that. Getting the State involved “was my call,” she said.

“Member validity” was discussed at a Sept. 1 meeting which the the petition’s alleged signees learned about in an email sent in the early hours of Aug. 31.   “It was agreed that we would proceed without validating membership. However, once the vote was underway, the Assistant Secretary Greg Burnett objected, leading to the meeting being abruptly ended by the President,” the petition said. Burnett did not reply to an email asking for comment.

On Sept. 10, Penn-Williams informed members that an election administrator had been appointed and they would need to confirm their emails with this administrator, the petition said. “We asked for clarification, and we were told by the State Conference Secretary Joan Gibson, that the (election administrator) position was not a valid position. We later found out that Madam President appointed her sorority sister to this position without the approval of the Executive Committee, or the General Membership.” An image of the email shows that they were also told they had to be members in good standing 30 days before the election.

Then on Sept. 12, according to the petition, a cease-and-desist email announced that the State conference was halting the election. From that date to Dec. 29, “the membership was not given any information, other than two vague emails that simply stated that the election was postponed. Multiple people made dozens phone calls, emails to Joan Gibson; State Conference Secretary, and the National Office of the NAACP, with no response.”

An image of another email shows that Gibson informed the members that the State NAACP was asking the National NAACP to intercede. “Per the bylaws,” Gibson said, “we invited fellow community members to join the Norwalk Branch NAACP to help shape the future of the branch.”  But on Jan. 9, “members in good standing” was limited to people who had joined on or before Oct. 10, “128 days before the tentative election will take place,” the petition said.

A Jan. 9 letter from National NAACP Director of Training Kevin Myles had announced a nominating meeting and promised a link to the meeting under separate cover, the petition said. “However neither the general membership, nor the Executive Committee of The Norwalk Branch received that link. We received no correspondence about the Election process, or the scheduled nomination meeting until January 25, 2021 at 7:41 PM, telling us that the meeting was cancelled.”

The petition was sent to Myles, and to Connecticut NAACP Executive Committee member Joan Gibson, and NAACP New Britain branch President Ron Davis, saying “We are petitioning to allow all of our members in good standing as defined in the Bylaws Article IX, Section 2(k), to allow us to have a fair and impartial election.” Gibson, Davis and Myles did not reply to an email asking for an explanation.

“There are approximately one hundred members that are having their votes suppressed by an alleged rule change that we have not received any written information about, and were not made aware of. The Norwalk Branch Process has not started, we do not know when we will be able to nominate our candidates, and we have a tentative election date of February 16th, 2021. We are petitioning to allow all of our members in good standing as defined in the Bylaws Article IX, Section 2(k), to allow us to have a fair and impartial election.

“We believe that we have laid out clearly the lack of information given to us, good standing members of the NAACP, as well as the actions of the Norwalk Branch NAACP and the written guidelines for branches as found in the Bylaws, and we want to stop the attempt to suppress the vote of approximately 100 members of the NAACP. We understand that this is an unusual election cycle, on top of Covid-19 and the hectic national election; we have suffered from the losses of family members of our State President, and our Branch President. We understand that this is an election process unlike any we’ve seen before, however bona fide members still deserve the rights promised to them in the Bylaws, and if there were any changes for this election process we should have been notified in a timely manner, giving us enough time to operate within those new guidelines.

“The National NAACP has historically fought hard for fair and impartial elections; we signed petitions, and made phone calls in support of these efforts, during this turbulent National Election; when our democracy was at stake against Trump’s made up claims. So, we ask that we are ensured the same rights that the NAACP fights to protect every day. We are now almost a week away from the tentative election date, and we still have not gotten any information on the nomination process. If any local, state, or federal election was handled the way this election is being handled, the NAACP would be fighting against it. Please do the right thing, and ensure a fair and transparent election process here in Norwalk CT.”

Signatories included former Board of Education member Shirley Mosby, Common Council members Kadeem Roberts (D-District A) and Diana Revolus (D-District B), and State Rep. Travis Simms (D-140). Former Council member Ernie Dumas was also on the list. Burnett was not.  None of them replied to an email asking about the petition.

Iliana Zulinga, Lauren Mallet,  Farrah Marin and Heidi Alterman confirmed that they signed the petition. Alterman said, “They went above and beyond to confirm I wanted my name on that petition. They gave me plenty of time to change my mind if needed and checked multiple times to confirm I was a yes.”

One person whose name is listed said they hadn’t seen the petition before it was sent to them by NancyOnNorwalk.

“The people listed are signees but also, we listed members who vote will be suppressed, because of the alleged vote change,” the person who sent it to NoN said. “The intent was to “show the National NAACP, and the State NAACP how many people they are potentially disenfranchised.”

Jalin Sead wrote, “My only comment about the letter is,  I hope we can begin to have a fair and transparent process so that we can get to work, it’s what we deserve.”

The election had been tentatively set for Tuesday. A Jan. 25 Zoom meeting to discuss arranging that was cancelled. Members have not been updated.

All elections are fair and there’s never any fraudulent activity. Next

This is downright shameful. Penn-Williams has clearly been failing Norwalkers for a while now, not just in this election.

I wouldn’t be surprised if she’s been behind the constant grandstanding over dumb issues like the Barbis instead of actually fighting for Norwalk’s POC on things like our current housing crisis.

This is what happens when progressive organizations forget that they are *progressives* and let local politics corrupt them.

As a member of the NAACP for years, I’ve been checking my inbox to try to figure out when the
nominations and election would finally occur. I hope that every member’s right to vote will be unabridged and that plenty of advance notice and multiple announcements ensure that members who want to participate in choosing leadership can do so. This is about justice.
We can’t advocate for equal treatment externally if we don’t practice it internally.