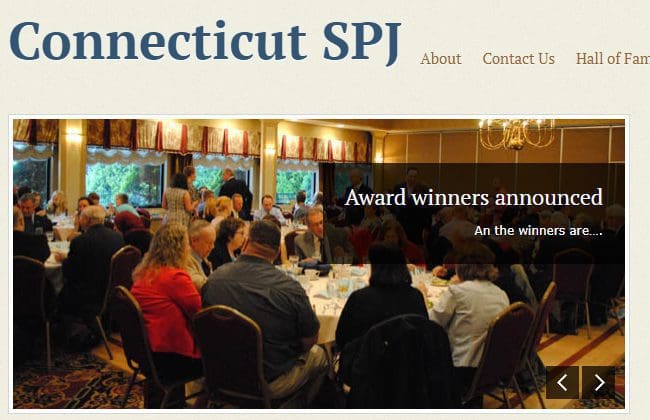 NORWALK, Conn. – NancyOnNorwalk scored eight awards in the Society of Professional Journalists (SPJ) Connecticut Chapter annual Excellence in Journalism Contest, as announced May 21.  Five were given to Nancy Guenther Chapman and three went to videographer Harold F. Cobin. NancyOnNorwalk placed second only to the New Haven Independent in the hyperlocal category.

The First Place Award for Hyperlocal Photo Essay went to Chapman for Scenes from Nov. 19 Norwalk BoE meeting – Will there be a repeat Tuesday? which depicted rowdy out-of-town NAACP protesters demanding Board member Mike Barbis’ resignation over racially charged emails.

“I’m particularly pleased to be an award-winning photographer now,” quipped Chapman in an email, “and for recognition of continuing coverage!”

In addition to the two first-place wins, NancyOnNorwalk‘s other awards were:

The Society of Professional Journalists is a broad-based membership national organization for journalists. The annual SPJ contest is open to professional entrants between December and February.  Entries are judged by a swap with other SPJ chapters around the country.   All Connecticut entries are judged by qualified journalists in other SPJ chapters, with the Connecticut chapter judging other states’ entries in turn.

Congratulations! Nancy and Harold, congratulations on your years of dedication to Norwalk and its stories, often under great stress.

Congratulations to Nancy and Harold and the Board of NON! Norwalk is better off with your coverage shining a light. Thank you.

Wow. Congratulations Nancy and Harold! It’s great to get professional recognition for what I think your readers are able to recognize every day. Thank you!

When I look at the local news coverage that’s available in other parts of the country, or even elsewhere in Connecticut, I hope we all realize how lucky we are here in Norwalk. I have yet to encounter anything that measures up to NoN.
Congratulations, Nancy and Harold!

In tribute to your good work, I’m going to send an email to 10 friends who I think might not yet be financial supporters and avid readers of NoN. You are both treasures! We need to support your work so that the fourth estate is alive and well in Norwalk. Non-profit journalism is the way of the future!
Harold, I live in Cranbury and missed the video when it was first published. That was quite a fire!

How I wish we had someone like you guys in Charlottesville, VA! Keep up the good work.