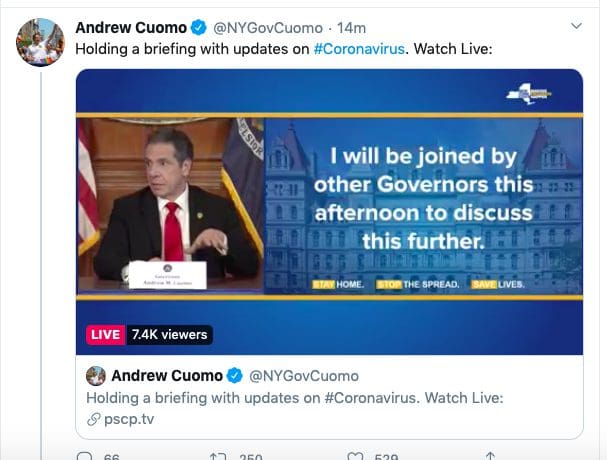 The Democratic governors of a half dozen northeastern states outlined a regional approach Monday to devising a plan for the careful easing of COVID-19 restrictions, warning  that changes will come slowly and be guided by public-health experts, not politicians or business interests.

On a conference call hosted by New York Gov. Andrew Cuomo, the governors of Connecticut, Delaware, New Jersey, Pennsylvania and Rhode Island reinforced the notion that the decision to reopen their states is one for governors, not the federal government or President Donald J. Trump. Massachusetts Gov. Charlie Baker, a Republican, later joined the regional planning effort.

“This is about being smart,” Cuomo said. “Not political, but smart.”

The governors said the states will be cognizant of any guidance put forward by federal authorities. But as Gov. Tom Wolf of Pennsylvania noted, the closing orders came from state capitals, not Washington.

In two Tweets before the governors’ conference call, the president offered a contradictory view, warning the order to reopen commerce would come from him.

The governors announced an approach, not a plan.

Each state’s gubernatorial chief of staff and designated public health and economic development advisers will serve on the six-state working group that will begin meeting Tuesday. Connecticut will be represented by Dr. Albert Ko, a Yale epidemiologist, and Indra Nooyi, the former Pepsi chief executive who advises the Lamont administration on economic issues.

Ko and Nooyi also will co-chair a Connecticut recovery commission. Its members will include Dr. Scott Gottlieb of Westport, the former Food and Drug Administration commissioner, and Dr. Ezekiel Emanuel, a respected bioethicist and oncologist. Emanuel is the brother of Rahm Emanuel, the former Chicago mayor and White House chief of staff.

The advisory group will be supported by AdvanceCT, the non-profit formerly known as the Connecticut Economic Resource Center.

Most of the states in the regional planning group are connected by two metropolitan areas: New York City, with southern Connecticut, northern New Jersey and various New York suburbs; and Philadelphia, which draw commuters from Delaware, southern New Jersey and the eastern Pennsylvania suburbs. At the northern end are three states with common borders: Connecticut, Rhode Island and Massachusetts.

Cuomo said the governors will not be developing a single template, as decisions will be dictated by local conditions. But Cuomo, Gov. Ned Lamont of Connecticut and Gov. Phil Murphy of New Jersey said the tri-state metro area most likely will have a common approach on some questions, given the interconnectedness of the region.

“One thing that’s undeniable is that this virus does not stop at the border of any county, state, or country, but the impact is the same when it comes to our respective economies and healthcare systems,” Lamont said. “Working as a regional coalition to make the right decisions will lead to the best public health results for all of our residents. We must solve these problems together.”

Cuomo said governors’ decisions have to be guided by experts and data.

“You take one step forward and see how it works. And then you measure the next step,” Cuomo said. “To the extent we can do that together, that is the best course, there’s no doubt about that. I don’t believe we end up with a fully common strategy. You have different states in different positions.”

On Monday, the Connecticut Department of Public Health reported 106 new hospitalizations for COVID-19, bringing to 1,760 the current patient census attributed to the coronavirus. Statewide, about one-third of the state’s 8,000 hospital beds were available, as well as another 1,800 beds at temporary facilities opened around Connecticut.

Deaths associated with COVID-19 increased by 48 to 601. The number of new infections confirmed by laboratory tests increased by 1,346 to 13,381.

Earlier Monday, Cuomo said during his midday televised briefing that he was encouraged by the continued flattening of new cases in New York.

“I believe the worst is over if we continue to be smart,” Cuomo said. “I believe we can start on the path to normalcy.”

With words echoed later by his fellow governors, Cuomo repeatedly warned that abandoning social distancing in commerce and social settings too soon could be catastrophic, spiking the infection rate in just two or three days.

He likened the easing of restrictions to opening a valve with a close watch on infection rates. The valve could be closed again, if infections increase.

“There is going to be no epiphany, no morning where a headline says, ‘Hallelujah, it’s over.’ That’s not going to happen,” Cuomo said.

But much remains unknown about how to safely move forward on a path to normalcy. There is no accepted dashboard of gauges and measures that will precisely tell governors, who are the first and last word on restrictions, how quickly they can remove restrictions.

Connecticut’s current capacity for COVID-19 testing remains limited, and the tests themselves only reveal a current infection, not immunity in someone who may have had a mild or even asymptomatic case. They also are vulnerable to false negatives.

The state ranks 13th in the nation for the number of tests it has conducted on a per-capita basis, despite having the fifth-highest per-capita rate of residents testing positive for the virus. Connecticut initially was slow to aggressively test for COVID-19, drawing criticism that it was missing an opportunity to slow the spread of the coronavirus.

Max Reiss, the communications director for Lamont, said Connecticut is one of the states aggressively pursuing antibody testing that would show immunity. But the state does not yet know which tests can be produced quickly and at scale.

The regional announcement comes after Lamont’s order extending the closure of schools, restaurants and many businesses until May 20 generated the first significant political blowback to his handling of the COVID-19 crisis, with Republican legislative leaders saying the order signed Friday was premature.

Senate Minority Leader Len Fasano, R-North Haven, said in a letter to Lamont that he should consult with “Connecticut legislative leaders before making any decisions or promises” about the timing and pace of easing restrictions, a clear reference to Lamont’s embrace of a regional approach.

“I am glad to see you taking a step toward discussing how to relax regulations and reopen businesses in our state when safe to do so. More than anything, we need a plan that is tailored to Connecticut and that reflects input from Connecticut residents and regions across the state. We need much more than a one-size-fits-all approach,” Fasano wrote.

But by day’s end, Fasano complained that Lamont was moving too slow, even if no northeastern governor was moving faster and three western governors later announced a similar approach.

“I was hoping to see movement forward today. I was hoping to learn about the governor’s ideas and plans to eventually reopen our state. But all I heard about was more layers of government,” said Fasano, the owner of properties directly affected by the COVID-19 closures. “Every day the governor doesn’t have a plan for Connecticut, his team is failing Connecticut small business owners and our hard working middle-class residents.”

“Certainly the ability to test a broader swath of the population would help us better manage this entire outbreak than we can right now,” said Dr. Jim Cardon, chief clinical integration officer for Hartford HealthCare.

Cardon said wide-scale testing will tell us not only who has the virus now, but also who has had it and recovered already, who might be immune from the disease and who might be carriers. The problem is that “we don’t have the tests available to us now” to accomplish that, Cardon said.

Dr. Michael Parry, the director of infectious diseases at Stamford Hospital, a facility at the epicenter of Connecticut’s COVID-19 outbreak, agrees.

“I think when the testing becomes more available and affordable, the testing should expand fairly quickly,” Parry said Monday.

Parry said expanded testing, particularly of people in high-risk categories, those in essential services and children, would enable medical experts and state officials to “make decisions about social distancing and opening up businesses.”

Relatively few children have thus far come down with COVID-19 in Connecticut, Parry said, and testing would help to determine if they have some immunity to the virus or if they are serving as a “reservoir of infection.”

Hospital workers manned the registration station at Stamford Hospital earlier this month where people can get tested for COVID-19. (Cloe Poisson, CTMirror.org)

Parry said regular coronavirus testing is becoming more available and that the turn-around time for labs to provide results of those tests has dropped dramatically.

Planning for the future is made more difficult by uncertainty about how many people have the disease or have already recovered, and because current tests for COVID-19 can sometimes provide false results.

“We’re assuming that maybe 10-15 percent of the tests are false-negatives,” Cardon said, meaning that the number of tests incorrectly shows that individuals don’t have the virus when they actually are infected. He said that is the reason doctors want at least two tests for high-risk people, which makes it less likely that both would result in incorrect findings.

Where the antibody test comes in

Finding out who has already had the disease and has recovered or is immune to it will require use of antibody tests, however, and those will probably not be available for a couple more weeks.

Cardon said there “is still some uncertainty” among the scientific community about whether a person who has had COVID-19 could get it a second time.

“I think [widespread antibody testing] should be part of the strategy,” Cardon said, pointing out that it’s clear that there are many people in Connecticut and around the U.S. who have had the virus but showed no symptoms. “Knowing who is infectious helps you contain [the spread of the coronavirus] far better than what we’re doing now.”

One valuable aspect of antibody testing is that it would help with the problem of COVID-19 tests that show negative results even for people who do have the virus, or false-negative results, the doctors said.

Parry said those 10-15 percent of false-negative test results may be the result of bad samples taken from people being tested or that the virus wasn’t present in a person’s nose when a swab was taken but was present in that individual’s lungs.

In cases where there is a negative test result, but a patient is showing symptoms of coronavirus, Parry said doctors are taking no chances. “If it looks like COVID-19, even with a negative test, we’re treating it as COVID,” he said.

Parry also said he believes there would be value to testing large groups of people for coronavirus antibodies, especially “where attack rates are high” such as in Fairfield County. He said it will be important to do antibody testing for high-risk individuals, including those over 65, people with heart disease, diabetes or even recent minor respiratory ailments.

The shortage of test kits, other essential materials for testing, and labs struggling to analyze all the test samples now being taken means doctors and the state have to decide “what’s the best use of our limited resources,” Cardon said.

Cardon said that Connecticut’s limited supplies of personal protective equipment for medical staff isn’t as much of a restriction on testing as the current lack of test kits, other key materials and lab resources.

Parry and Cardon both said state officials are reaching out to Connecticut’s medical experts and asking the right kinds of questions to help plan for a future when more testing equipment and laboratory capabilities are available.

“I have a regular dialog with the state epidemiologist,” Parry said. “We talk all the time about things like this.”