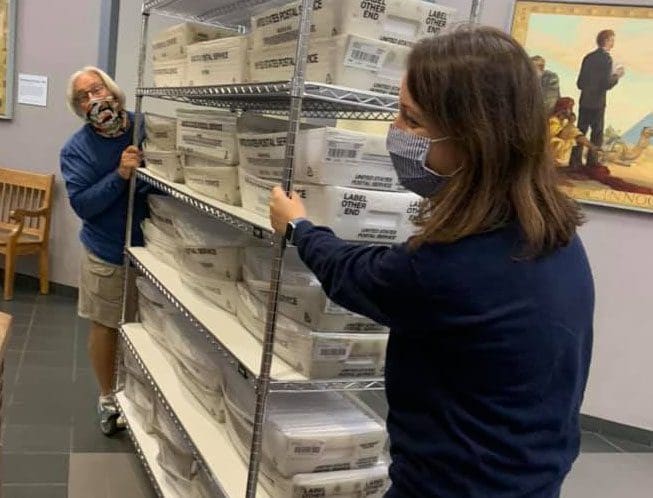 Election Day is Nov. 3. Many Norwalkers have already voted by absentee ballot.

NORWALK, Conn. — Breathe a sigh of relief for the Town Clerk’s Office – it’s almost over.

“We are we are planning to be here all weekend,” Rick McQuaid said. “So, the ballots get turned over five o’clock on Friday night. If I could get the Norwalk High marching band to march through our building at five o’clock Friday night, I’d do it.”

Norwalk Democratic Registrar Stuart Wells explained, “The new law says we can open the outer envelopes after 5:00 p.m. on Friday – we are going to start this Saturday at 9:00 a.m. Then on election day we can open the inner envelopes and start putting the ballots through the tabulators …With luck we will have all of the absentees that we have processed by Monday all counted by Tuesday night and then we can report those results.”

“I think the President has been casting some shade on the voting process, casting some shade upon the integrity of voting right now,” Lamont said. “I don’t know what his endgame is, but I can tell you that here in the state of Connecticut and I think 49 other states we’re doing anything everything we can to give you confidence that your vote counts matters is being cast with integrity.”

Still, “It’s going to take us a little bit of time to get all those votes counted,” even with the bill allowing the count to begin early, Lamont said.

Locally, “There will be absentees that come in Tuesday’s mail and in the drop boxes, and we may not get to them until Wednesday,” Wells said. “But those late arriving ballots will hopefully be only about 5% of the total ballots cast, as we already have almost 13,000 absentees in hand. We expect that this will be enough to decide many of the races – and then everybody will be happy or sad, and we can complete everything in peace and calm. That’s the plan, anyway.”

McQuaid said he gets asked about fraud all the time. He doesn’t see any and his staff is very vigilant, he said.

About 12,800 Norwalk absentee ballots had been returned late Tuesday, of the more than 17,000 have been requested,” McQuaid said.

“This is incredible … 70 percent of their ballots are back. So obviously, whatever we did, we did OK,” McQuaid said.

Figures released Monday night by the Secretary of State’s Office showed Norwalk as third in the state for absentee ballots cast (returned to the Town Clerk’s Office):

The rate of return among those three:

Lamont said, “Often by the last week of a campaign, you know, the two candidates start blending into a muted shade of gray. And I think you’ve got a black and white contrast. And I think that’s going to bring out an awful lot of voters. I think that’s good. I hate to say it even in a pandemic, I love the fact that people know a vote matters. They’re stepping up and they’re gonna cast their vote.”

McQuaid said Tuesday was very frustrating, with the State’s system down and “hiccups all day.” It was bad because it was the last day that people could register to vote, other than registering on Election Day, he said.

Gabe Rosenberg, Communications Director for Connecticut Secretary of the State Denise Merrill, did not confirm the allegation of problems all day.

“CVRS (which does not affect people registering to vote) was slow today because of volume, so they rebooted it. It was down 20-30 minutes for the reboot and state IT is working on getting it more capacity,” Rosenberg wrote.

Wells, in a Wednesday comment on this story, said the problems went on for hours.

On Tuesday, McQuaid said,“You’ve got five days left six days left of actual work-work work. And we were basically are put to a standstill today. Most of us are all going home early.”

But, “We’ll get it done. There’s no doubt about it. If you had asked me, the first of October if I thought we could do this…. (I would have said) I don’t know if we can handle this. We are very, very tired, or mentally stressed out of it. But we’re going to get it done. And people are going to be surprised from our end, from the Town Clerk’s office, how quickly numbers will be available.”

You’ll be surprised at how hard the Registrar of Voters, “including Karen Lyons, worked to make the polls safe and make this work. It’s going to be incredible,” McQuaid said. “I mean, we’re still one of the top cities in the state for ballots returned per what we sent out, so we’re OK.”

“Longer term, we hope people will learn to accept getting the results from 95% of the ballots on election night and learn to wait for the last 5%. It is just plain wrong to expect us to work until 3:00 a.m. and then bitch that we make errors, or that we must be up to no good because the little towns have already reported their results. (Easy to do if you only have one or two precincts).

“If politicians want final results by midnight they can give us the tools to do this – it they want it all to be done by hand so it can’t be hacked, then they can wait for the final results. While they are at it, they also might recognize that they keep adding new things to the job, but provide no increase in resources or pay – and then they can’t understand how the registrars just want to resist their wonderful new ideas, while leaving obsolete rules and requirements on the books for years.”

I am not sure what Gabe Rosenberg, Communications Director for Connecticut Secretary of the State Denise Merrill, was smoking yesterday, but CVRS (The Connecticut Voter Registration System) IS where all voter registration is recorded and it was so slow all morning yesterday that new voters could not be entered, absentee ballots received could not be recorded, and, worst of all, new absentee ballots could not be sent out to applicants. It was better after the system was rebooted. We have the new voter information, and the returned absentee ballots and that information will get into CVRS today.
People stayed late or came back and worked an evening shift so that the newly requested absentee ballots will be sent out, but, for many, one day was lost in getting them into the mail. Hopefully the voters will still get those ballots through the mail in time to vote them — If so, they should certainly use one of the drop boxes to return them to the town clerk.

The Governor should worry less about what the President says and look inward to cities like Bridgeport, New Haven, and Hartford that have botched multiple elections without all of this new process. I have 1000% faith in Norwalk, but almost none in the cities where we see problems year after year after year.

Hats off to Rick, Stuart, and the rest of their teams! In a time of highly suspect behavior by officials in other states, it is such a relief to be able to tell out of state friends that we Norwalkers have an efficient and trustworthy bipartisan election administration team (really, nonpartisan in practice, as I’ve observed during stints as a Poll Moderator)! We are fortunate to have a Registrar (Stuart) who happens to be a lawyer and adroit with technology. We are also fortunate to have a Town Clerk (Rick) who exemplifies positive leadership and diligent dedication to public service.

I firmly believe hand marked paper ballots are the most reliable and sensible option available; it is absolutely worth waiting to ensure our hardworking local election administration team has the time, resources, and opportunity to rest necessary to complete their job accurately and thoroughly! It’s not like we’re going to be waiting in crowded banquet halls, hoping final results come in before all our favorite (free) food and drinks run out, right? We are still closer to the beginning than to the end of this COVID-19 era of funerals via Zoom.

As she aptly point out, this is not the case in some other states. What are the odds of this election being settled by the time breakfast on Nov 4th roles around? By the time this is settled, most folks will have already had Thanksgiving turkey and have their Christmas trees up.