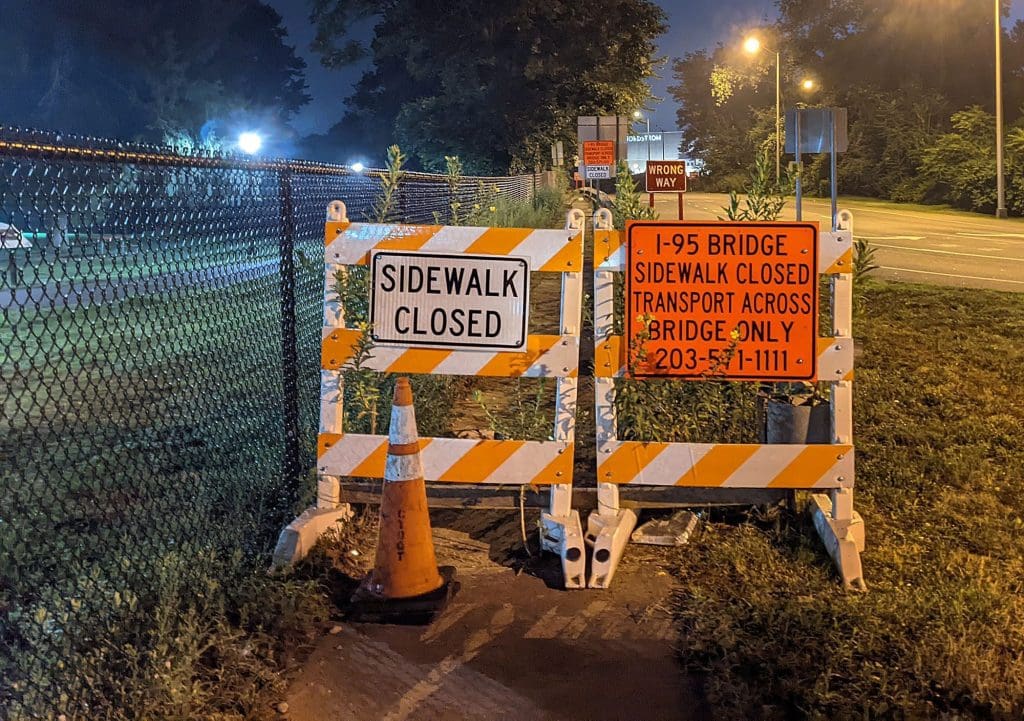 The sidewalk closed in mid-2020, according to Norwalk Bike/Walk Commission Chairman Tanner Thompson. Although Director of Transportation, Mobility, and Parking James Travers said he’d been told it would reopen in July, that didn’t happen. The new estimate is April.

“I have just been told that CTDOT does not plan on reopening the walkway until the drainage work is finished between the bridge and the on ramp at East Street {cq}. I remain disappointed as I think this pathway is a critical link for members of our community,” Travers said Sept. 9.

The Connecticut Department of Transportation (ConnDOT) has been rehabilitating the bridge, which carries Interstate 95 (I-95) over the Norwalk River, as part of an overall I-95 Norwalk Westport project.

“The Yankee Doodle Bridge Project is complete-there will just be some punch list items to take care of over the next several weeks,” wrote ConnDOT Communications Manager Josh Morgan. “The reason the sidewalk on the bridge hasn’t reopened is because of additional projects in the area. We’d want to ensure pedestrians can safely travel from either side of the river before the sidewalk reopens.”

Michael Rosenblatt, Project Manager for the I-95 Median project, said his work has just begun.

“{T}he first critical operation is to install an infiltration basin which collects all the drainage runoff from I-95 that we will be replacing in the coming months,” Rosenblat wrote. “This basin is the low point for all the drainage and helps reduce sediments prior to entering the Norwalk River at the discharge point off Hendricks Avenue.  This work required a large excavation with temporary earth retaining walls adjacent to the Yankee Doodle sidewalk so for safety reasons we cannot allow pedestrian traffic until we have completed the basin which is expected to be done by April 2023.”

Why collect the runoff?

The Norwalk Harbor Management Commission fought long and hard to get I-95 runoff addressed. In 2017, Commissioner John Pinto used the phrase “OH-PAH-PAHs” to explain.

“OH-PAH-PAHs represent the persistent class of toxic chemicals that coat our highways and, through storm water runoff, wash into our Harbors,” he wrote. “…Hydroxylated polycyclic aromatic hydrocarbons (OH­ PAHs) and polycyclic aromatic hydrocarbons (PAHs) are pollutants generated mainly from vehicle emissions, smoke and soot from combustion engines, and material left behind by vehicle tires.”

The contaminants bind to dust and dirt particles and as rainwater pours over the impervious highway, they get carried into the river, he said. There, they “rapidly degrade within the aquatic environment,” and while that might sound positive in actuality, ultraviolet radiation from the sun “greatly enhances their toxicity.”

He wrote, “Use of stormwater control systems over the Yankee Doodle Bridge would not only benefit Norwalk Harbor, but would be applicable to other highway bridges crossing Connecticut’s coastal waterways.”

I’ve been trying to find out what’s happening. They saved one tree at each exit!🥵 why is it taking so long!? No skilled workers! And there’s no additional road capacity planned so 95 will still be just as congested!😩👎🏽🙈

9 figures for the sewage problems.

4 years to build a sidewalk and 20 other 2 month projects.

Pot taxes will fix all of this.

Let’s meet on zoom to discuss.

I too am looking forward to the YDB walk way opening… I think the OH-PAH-PAH reason makes sense.

We wouldn’t accept a street being closed to cars for 3 years, why should we accept a critical pedestrian link being closed for that long? It’s always pedestrians who bear the brunt of construction. Norwalkers deserve access across the river, for all modes of transport.

It’s not safe folks, read the explanation!
This basin is the low point for all the drainage and helps reduce sediments prior to entering the Norwalk River at the discharge point off Hendricks Avenue. This work required a large excavation with temporary earth retaining walls adjacent to the Yankee Doodle sidewalk so for safety reasons we cannot allow pedestrian traffic until we have completed the basin which is expected to be done by April 2023.”